Genryū (源流) is translated as a "river source, headstream, or headwaters". It is in the genryū of Japan that I prefer to fish with my Tenkara rod. There are several reasons for this preference but my main reason is that I don't want to pay an arm and a leg to fish elbow to elbow with a hundred other anglers. As soon as I get off the beaten path and follow the little blue lines on the map I find solitude, peace, and trout; sometimes within spittin' distance of Tokyo (ok a slight exaggeration, unless you can spit 35 miles...). 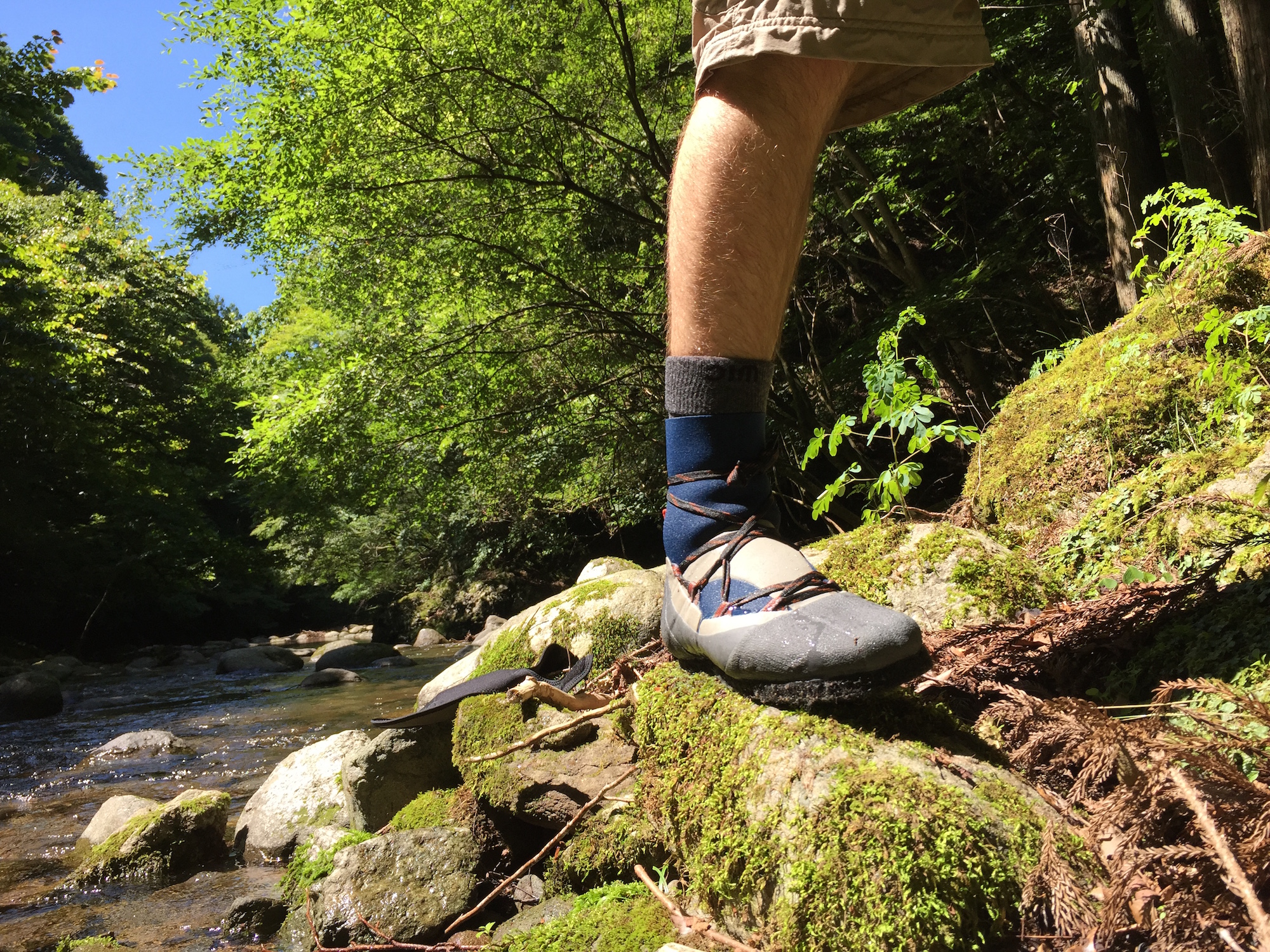 On my last genryū trip in Niigata our guide and friend Kado-san was wearing a pair of sawakutsu (沢靴), loosely translated as "swamp shoes", from Montbell (Note: They come with rubber soles too). While my other friend Tetsuya was wearing a pair of traditional Japanese rice straw sandals! I, on the other hand, was wearing a pair of old clunky hiking boots. While I was clutching to cliff faces with my feet sliding out from under me on the slime covered rock and my friends were scampering about confidently I swore I was going to get a pair of real Tenkara shoes. 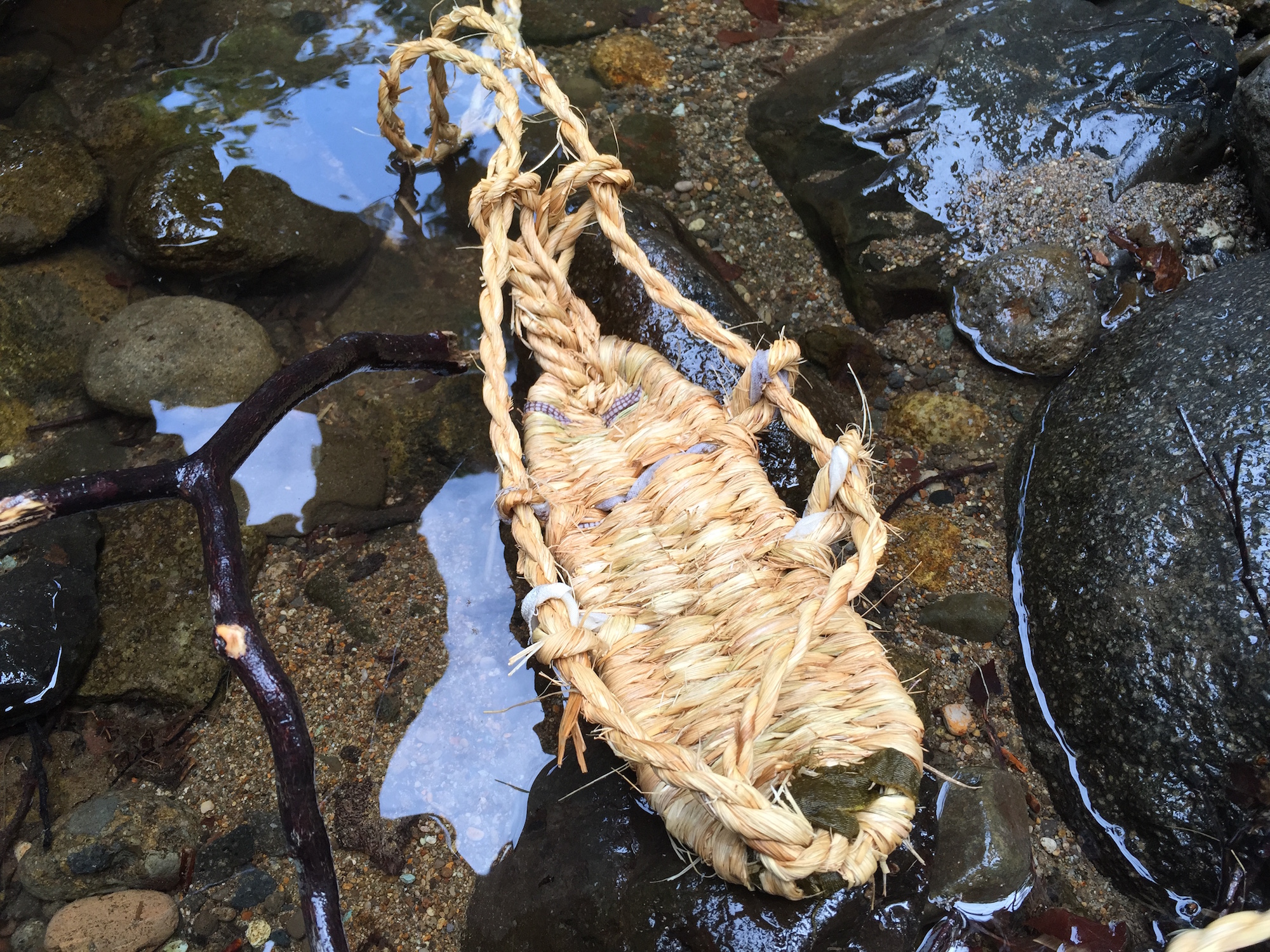 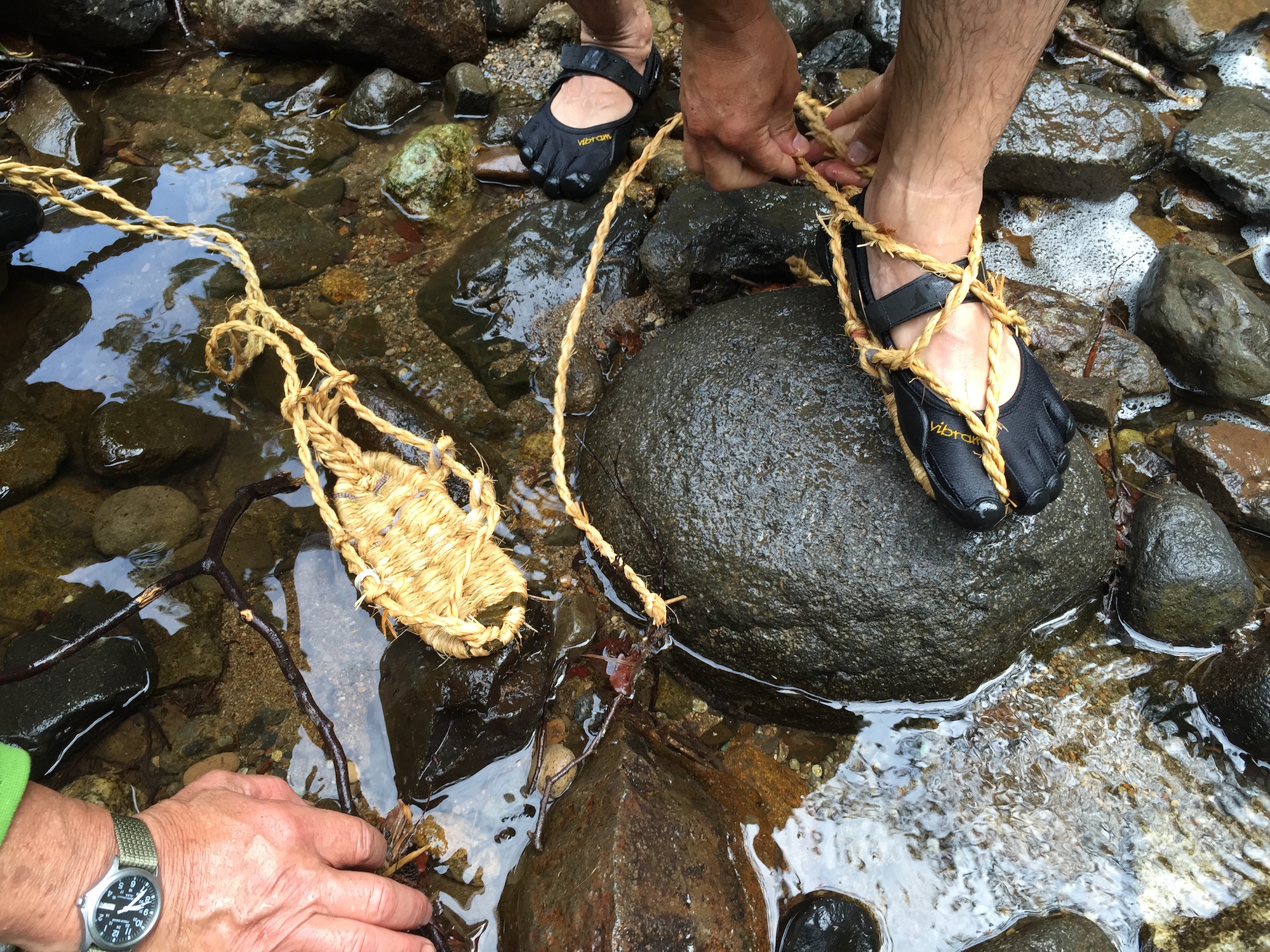 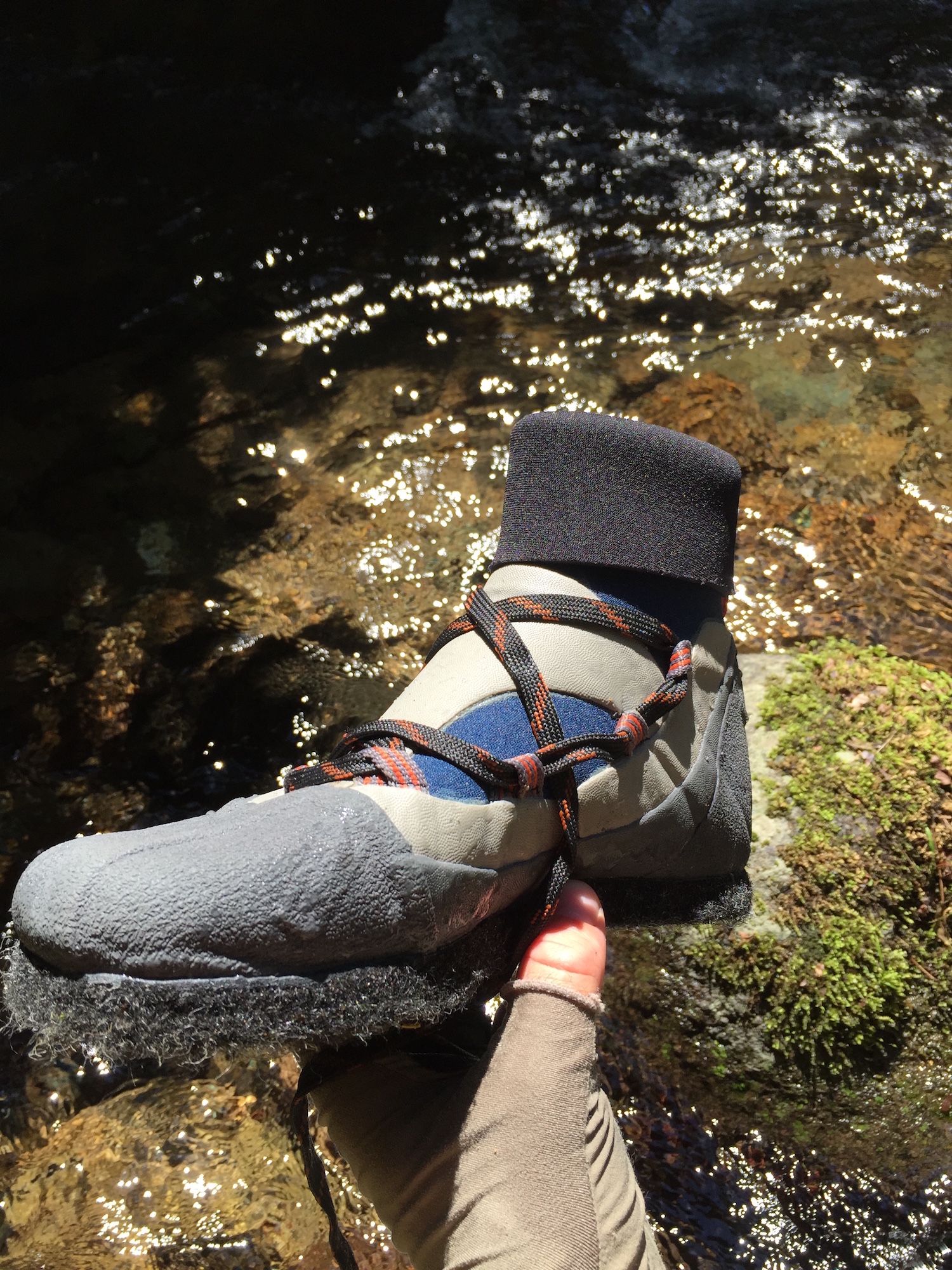 Sawanobori is the extreme sport of stream climbing - it is similar to canyoneering except that you go up, instead of down, water filled canyons. The Sour Shoes, while designed for sawanobori, are perfectly suited for wet wading and genryū Tenkara. They have felt soles (Japan does not have any problems with aquatic invasive species), are incredibly light (coming in at 328 grams), and they lace up in similar fashion as the traditional Japanese rice straw sandals. 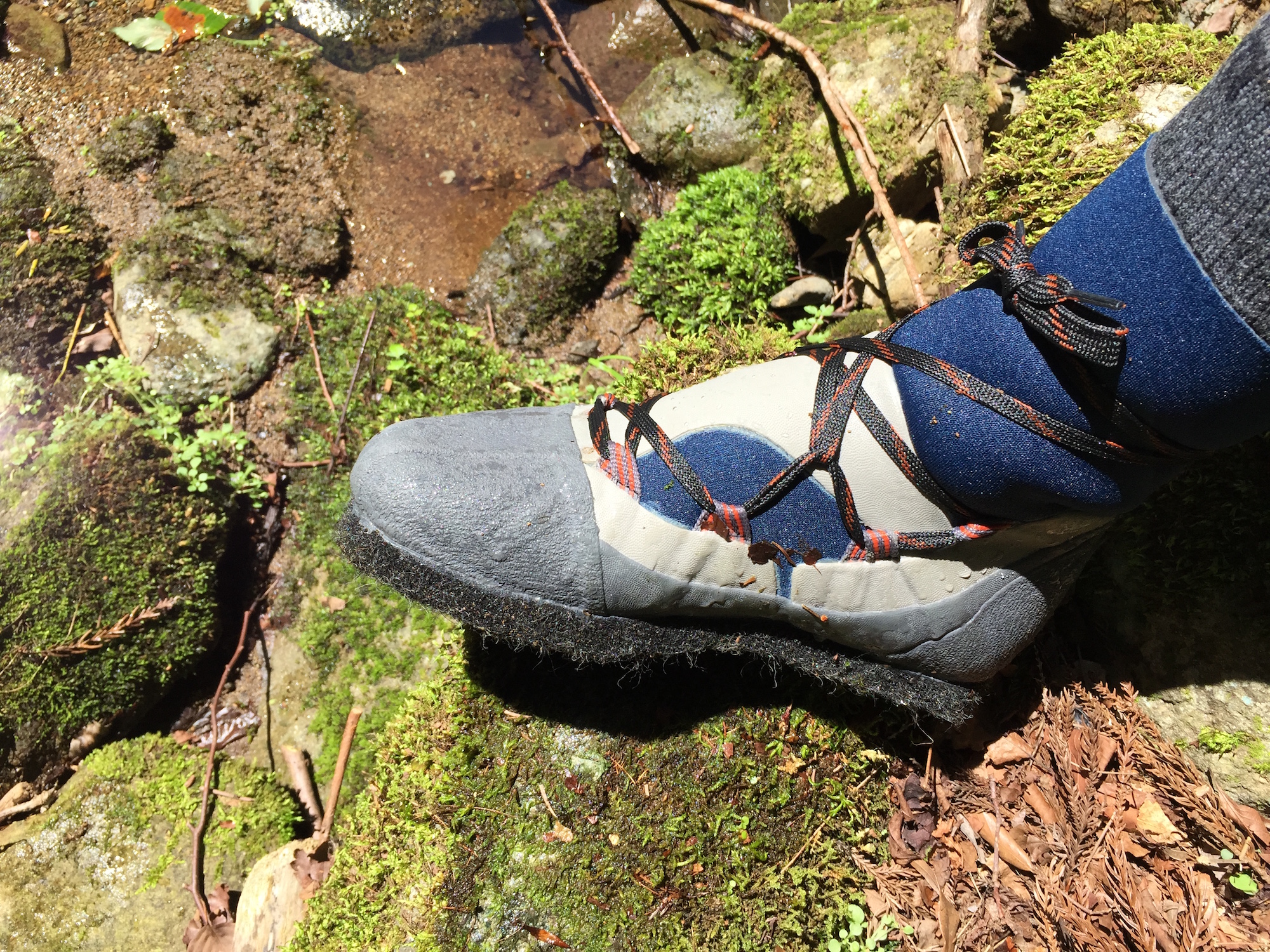 So I stopped in the Kadoya Outdoor Shop in Yokosuka, Kado-san took my measurements, and we placed an order for my new wet wading setup. A few days later I was out on the river with my new Sour Shoes, Wicking Trekking Stream socks, and neoprene leg guards! 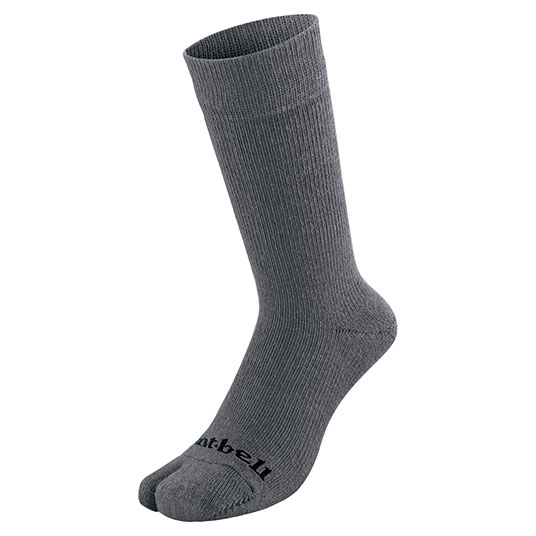 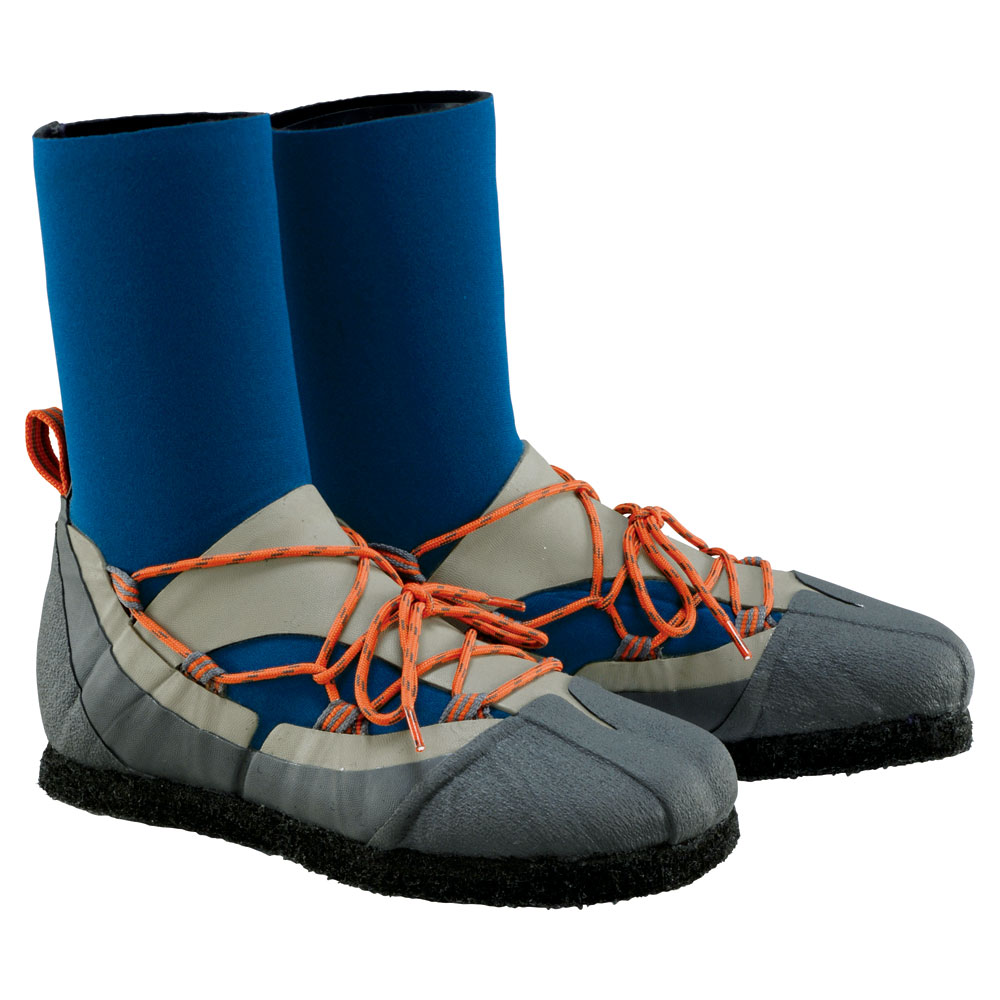 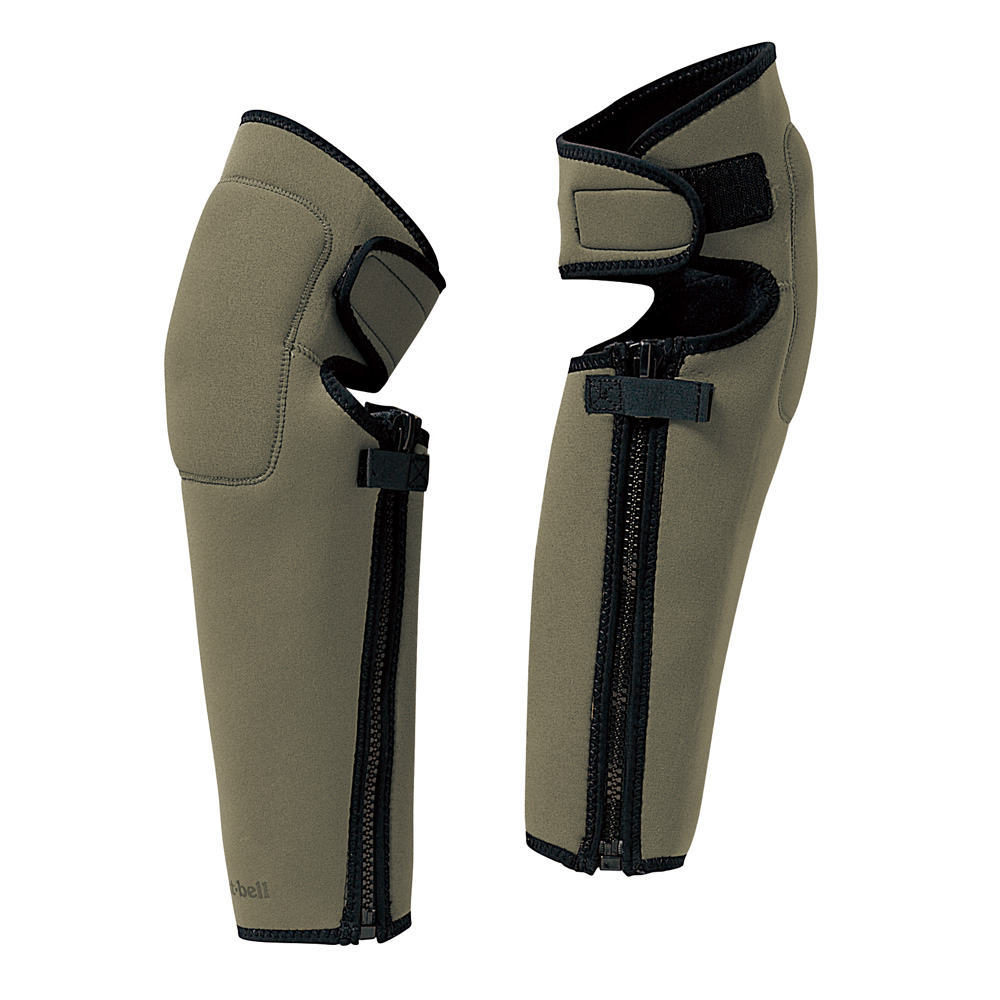 The Sour Shoes have a split toe inside the shoe. Your big toe is isolated and the four other toes have their own separate 'pocket'. It was recommended that I wear the special Wicking Trekking Stream socks from Montbell because the socks have a similar layout, which makes it infinitely easier to get the shoe on, especially when the shoes are dry. (See photo below of the sock) 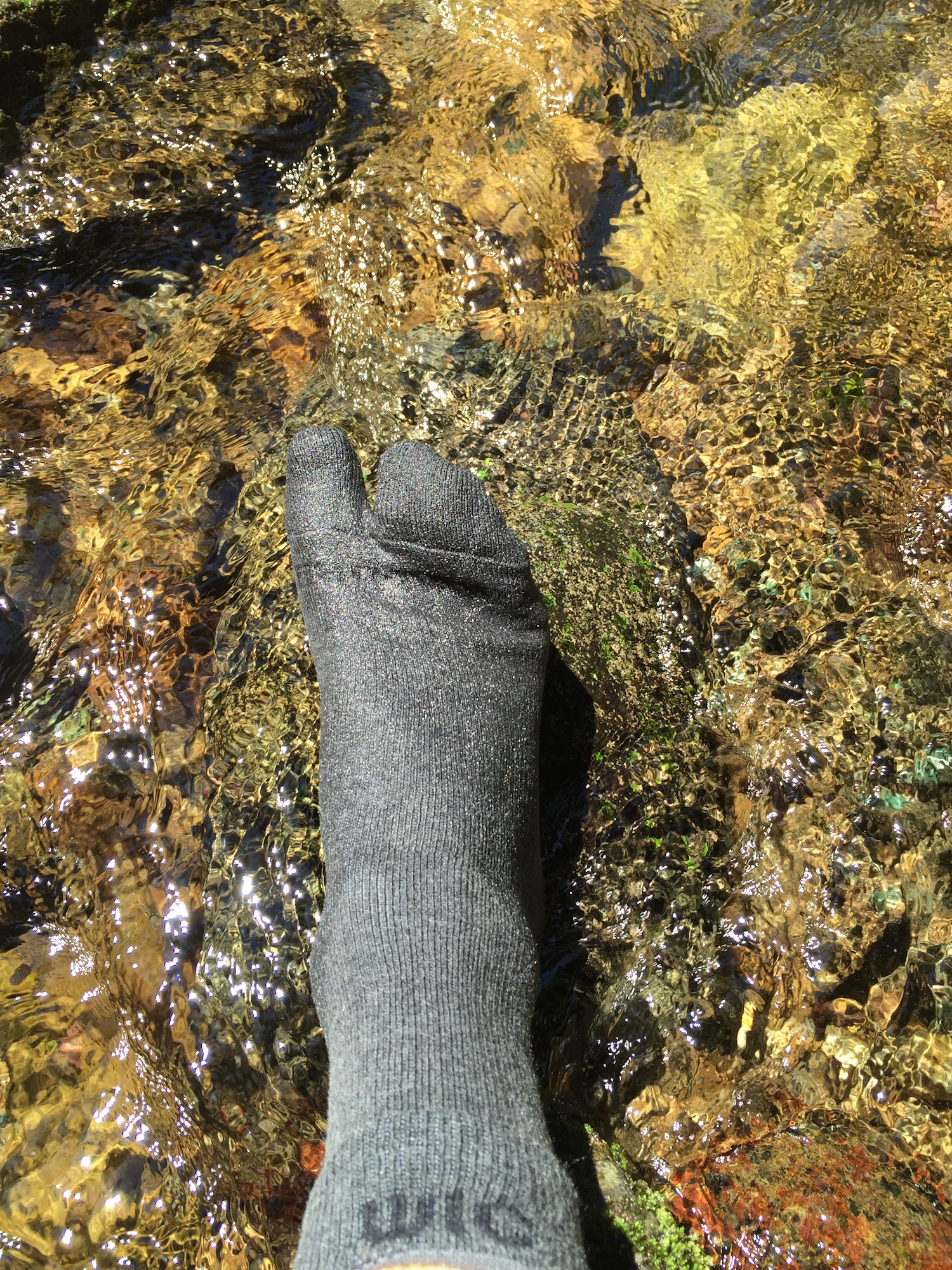 These shoes are soft, which is what makes them great for Sawanobori. This took some getting used to though since I am used to wet wading and fishing in shoes with a bit more 'substance'. My last pair of wet wading shoes had a stiff Vibram sole. However, with the Sour Shoes I could feel rocks under my feet, which helped with traction - but it took a little to get used to. I have never used felt soles before and was not prepared for the slight learning curve that they require. They stuck when I least expected them too (think slimy, wet, moss covered rocks) and slipped when I expected them not too (think dry flat sloping rocks) This was due to my inexperience with felt. After a full day on the river I had become accustomed to their capabilities and limitations.

They are sized similar to comfortable climbing shoes in that you want your toes up as close to the toe box as possible. If you have too much slop in the toe box, the shoes will not perform as well. At one point I had to traverse a cliff face to bypass a weir. I was very impressed with how well the shoes performed, especially considering if I slipped I was looking at a 6 meter (~20') slide into a fairly deep pool. 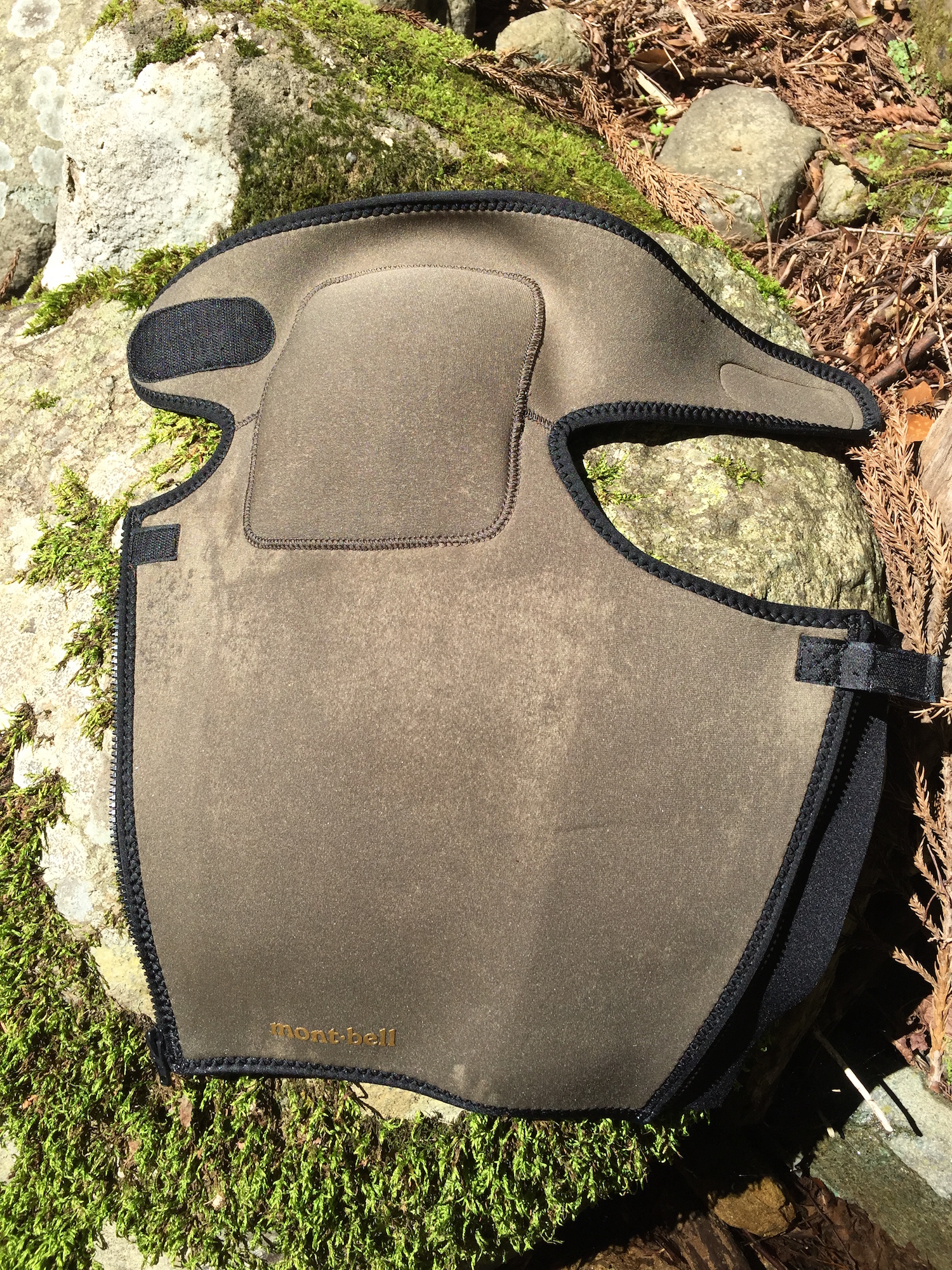 The wicking trekking stream socks and the neoprene leg guards kept my feet amazingly warm. In fact often times I felt like my feet were not getting wet. I am sure they were but I was so warm and comfortable that I did not notice. I was able to fish for hours, standing in 60+cm (~2') of cold mountain stream water. Often times while wading through shallow water I could not even feel the cold water. My feet stayed warm, dry, and comfy the whole day.

At first I had the neoprene leg guards on way to tight and consequently I experienced some chafing on the back of my knee. Once I got the tightness dialed in they were much more comfortable.

The neoprene leg guards have a zipper on the back of the calf, with an ample zipper guard. Not once did I zip up any leg hair, which I was a bit concerned about. Throughout the day I kept taking them on and off to check for yamabiru aka land leeches. They did a great job of keeping the leeches out. At the end of the day I only had one attached to my thigh. He was still very small, so he had probably just attached himself. 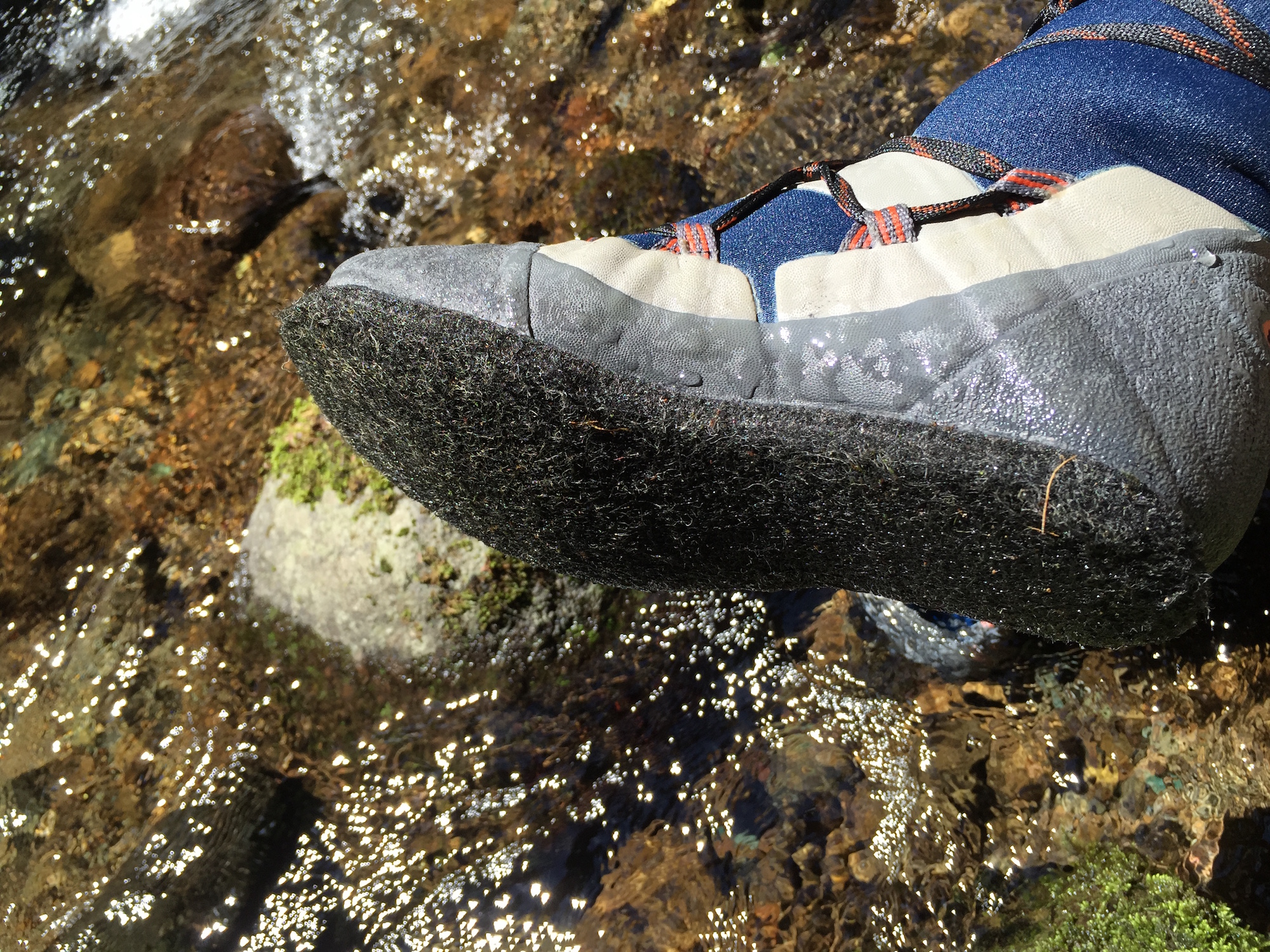 I mentioned above that the Sour Shoes (サワー シューズ) were soft. I found them similar to minimalist shoes or five finger shoes. I had never walked, wet waded, hiked, climbed, etc... in such soft shoes. The next day my back and legs were very sore as I had used muscles I did not even know existed. Will I go back to a more clunky wading shoe that provides more support? No I do not think so... at least during the summer. For early spring Genryū fishing in Japan these might not provide enough warmth but I will have to wait till next year to test this hypothesis out. 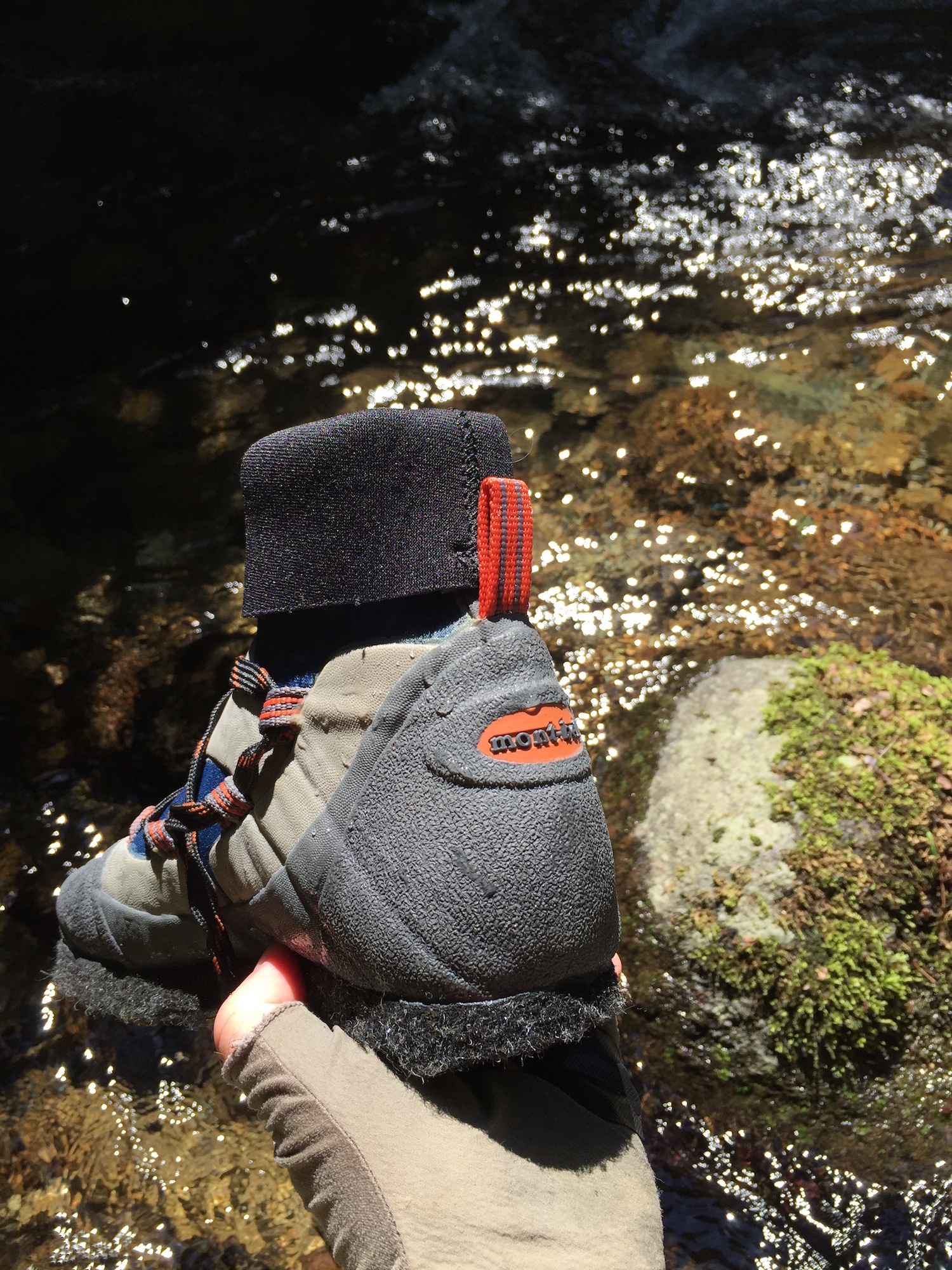 Kado-san said I could do lite hiking in the Sour Shoes.  (in September I did go backpacking, for about 10km carrying a 16kg pack, wearing these very shoes. I survived.) but on our trip to Niigata he wore his sawakutsu felt soled boots over about 6.5km (~4 miles) of hiking and scrambling and about 3km (~2 miles) of wet wading. The sawakutsu boots offer a bit more support and are not as soft as the Sour Shoe though. 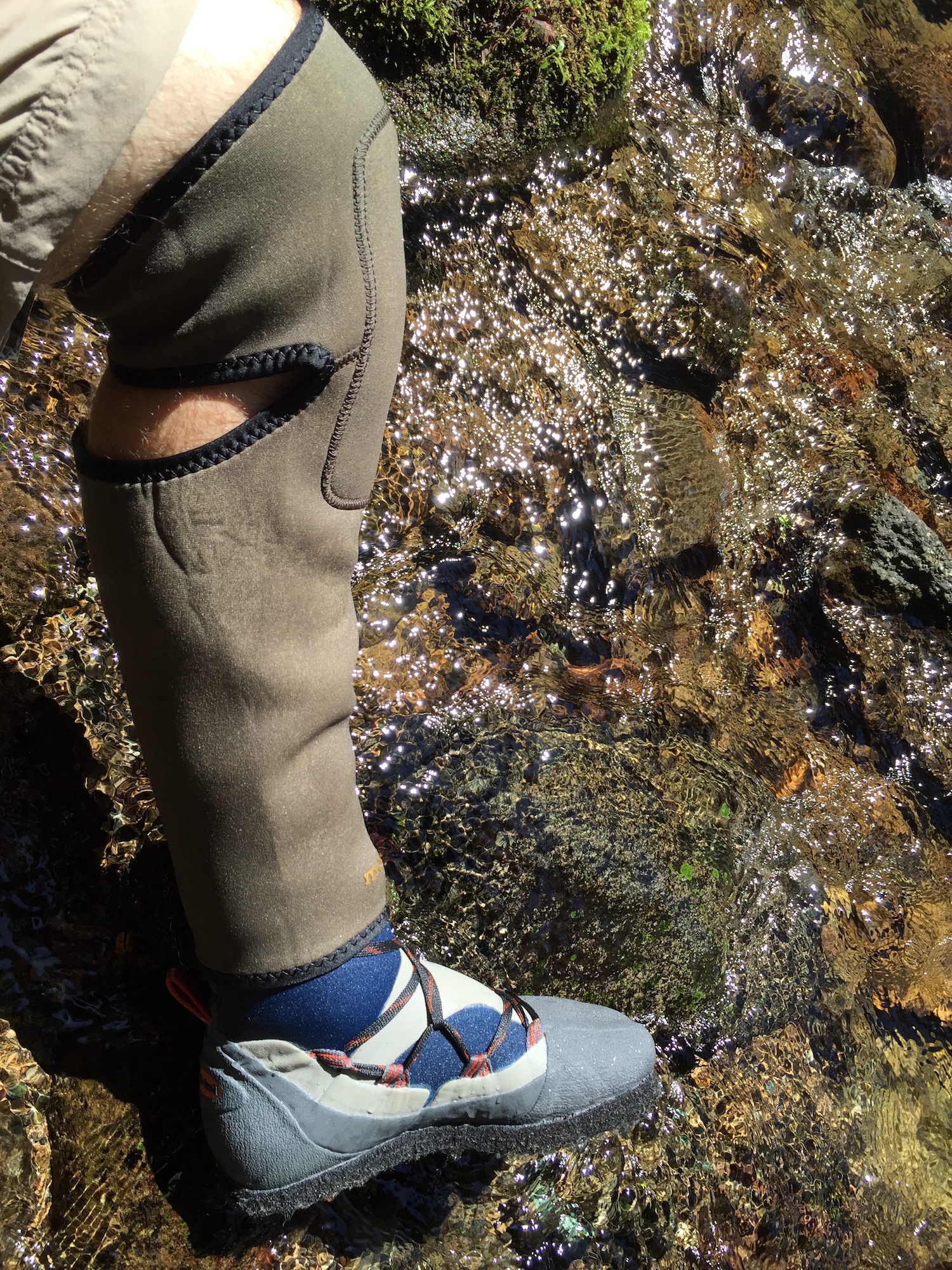 Authors Note: I received absolutely no compensation from Montbell to write this review. I paid for their product and took it upon myself to review their product. All Fallfish Tenkara Gear Reviews are uncompensated and unsolicited reviews of my personal gear.