Every year in late August the head high grass called susuki (すすき) blooms en-mass. The soft gold grass "flowers" are quite beautiful despite their lackluster coloring. It is always a little sad to see the susuki blooming though as it signals the rapidly approaching end to the mountain stream fishing season. With only five weeks left, I am planning some cool trips for September. This past week though I took full advantage of the pleasant summer weather and headed to Niigata Prefecture, with my Tenkara sensei Kado-san, for a four day/three night Tenkara trip. 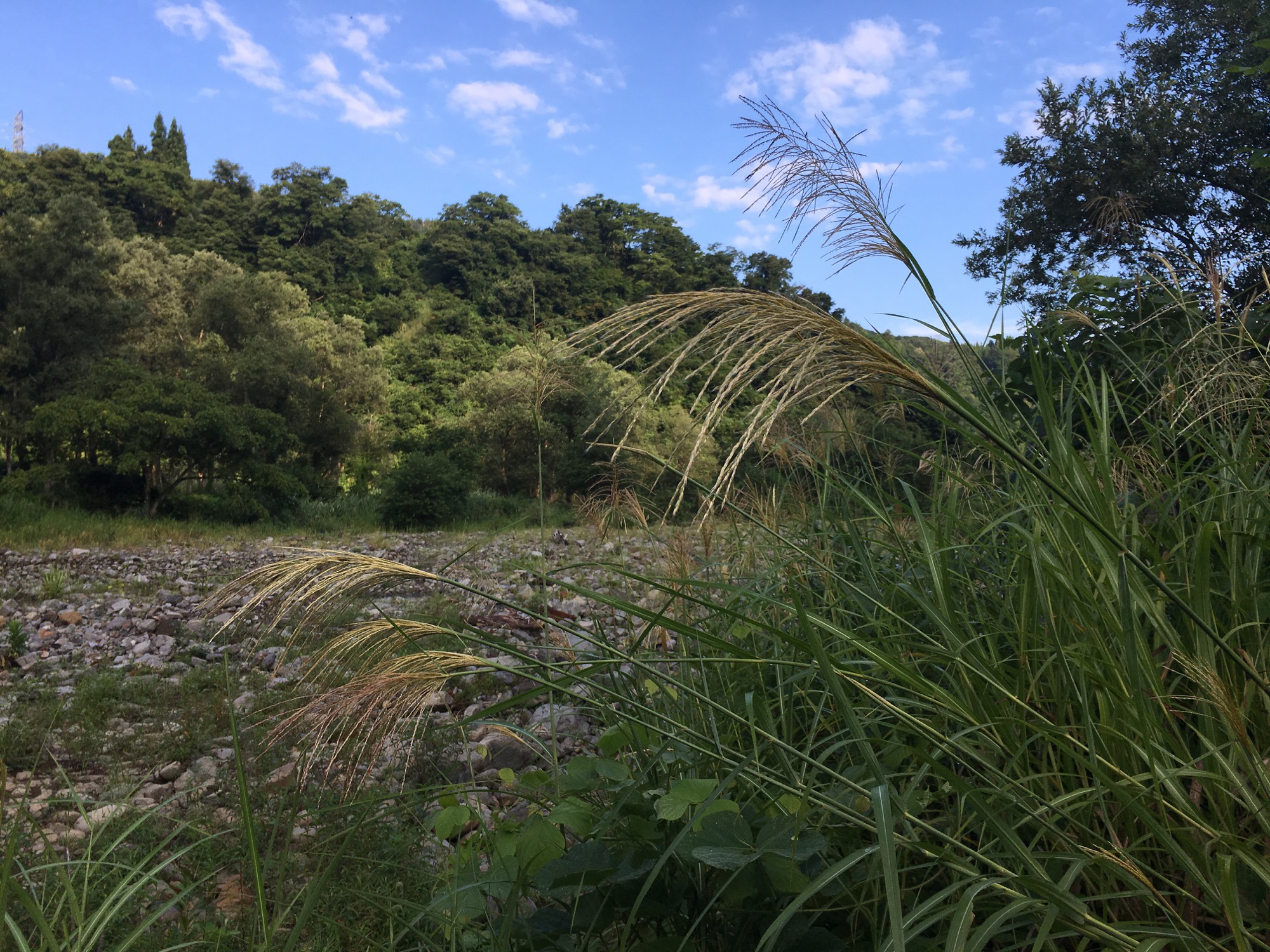 Night one we drove deep into the mountains until the road turned to dirt and was blocked by a gate. We pitched our tent on the shoulder of the road while the frogs jumped through the grass and from the trees overhead. The moon was shining brightly. It was hard to believe that just three hours away tropical storm Kompasu was dumping lots of rain throughout the Tokyo region. We retired late at around 0200 and were awake five hours later to make Royal Tea and to dine on a quick camp breakfast. Stuffed on a delicious breakfast courtesy of 7-11 we plunged into the forest towards the siren song of running water. 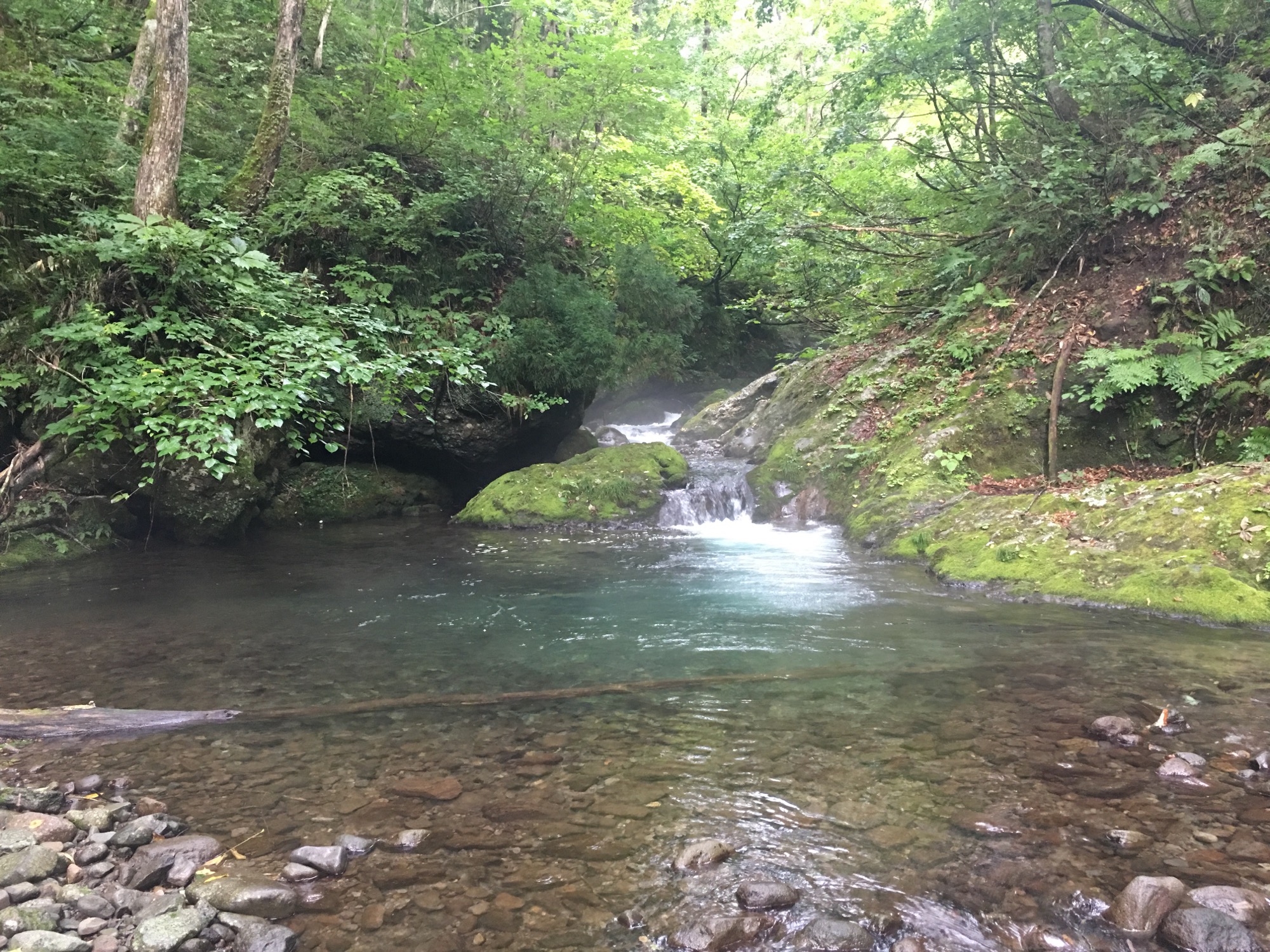 The storm clouds had been building all morning and shortly after we had both caught and released our first Iwana the skies opened up. It was one of the hardest rains I had experienced in Japan, we were both a little concerned about flash-floods. Thankfully though the rain let up and assuaged our fears. After the rain the fishing really picked up and we were catching and seeing a lot of fish. Due to the rain and dripping trees I did not get very many photos though (I really need to get a waterproof camera). 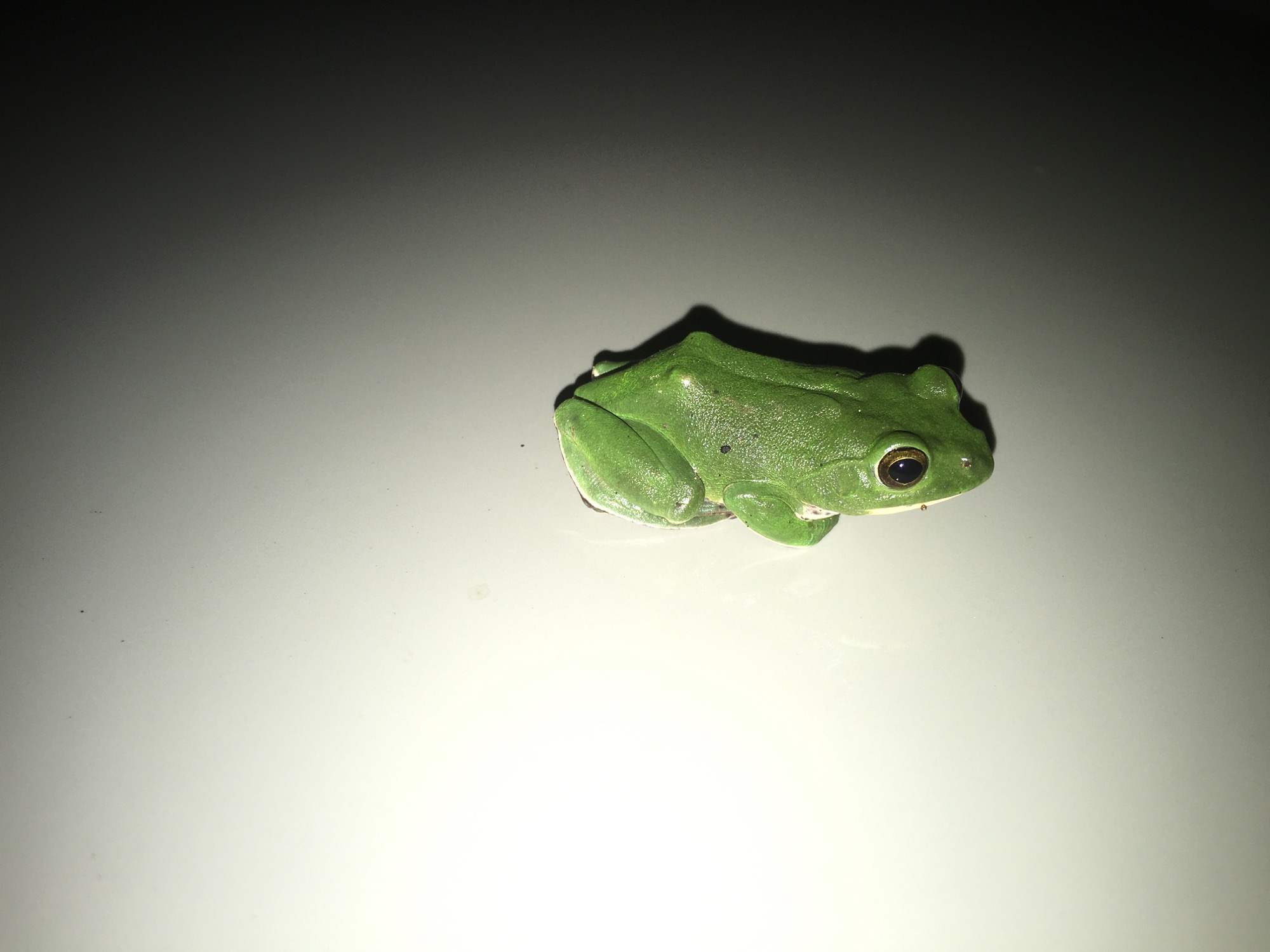 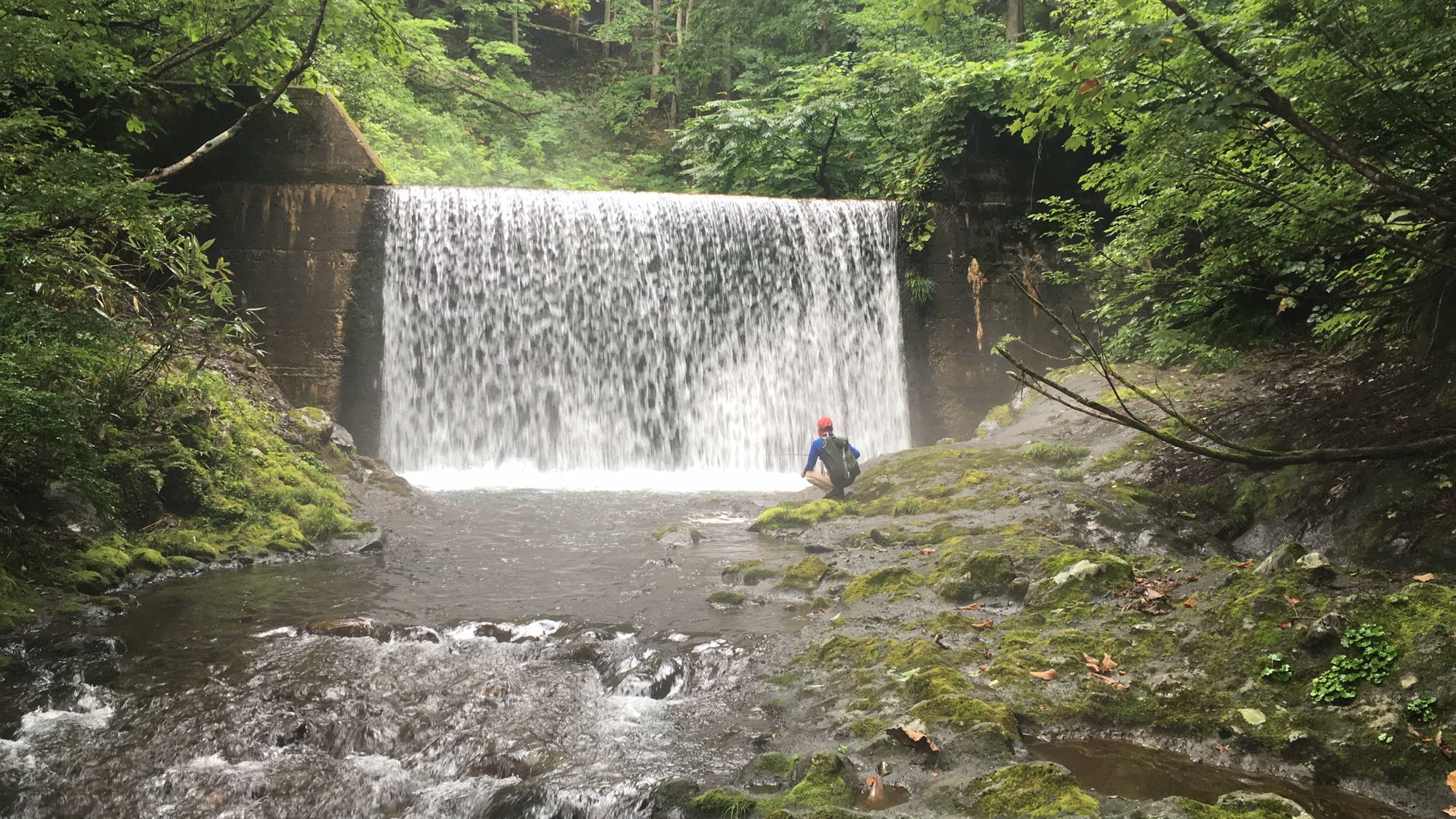 Around 2pm we packed up our Tenkara rods and plunged into the jungle and bushwacked our way up a steep hillside towards an old logging road. Safely back on the "road" we made our way back to camp. The previous night's camp was only temporary, Kado-san had found a much better place to camp on a recent scouting trip. 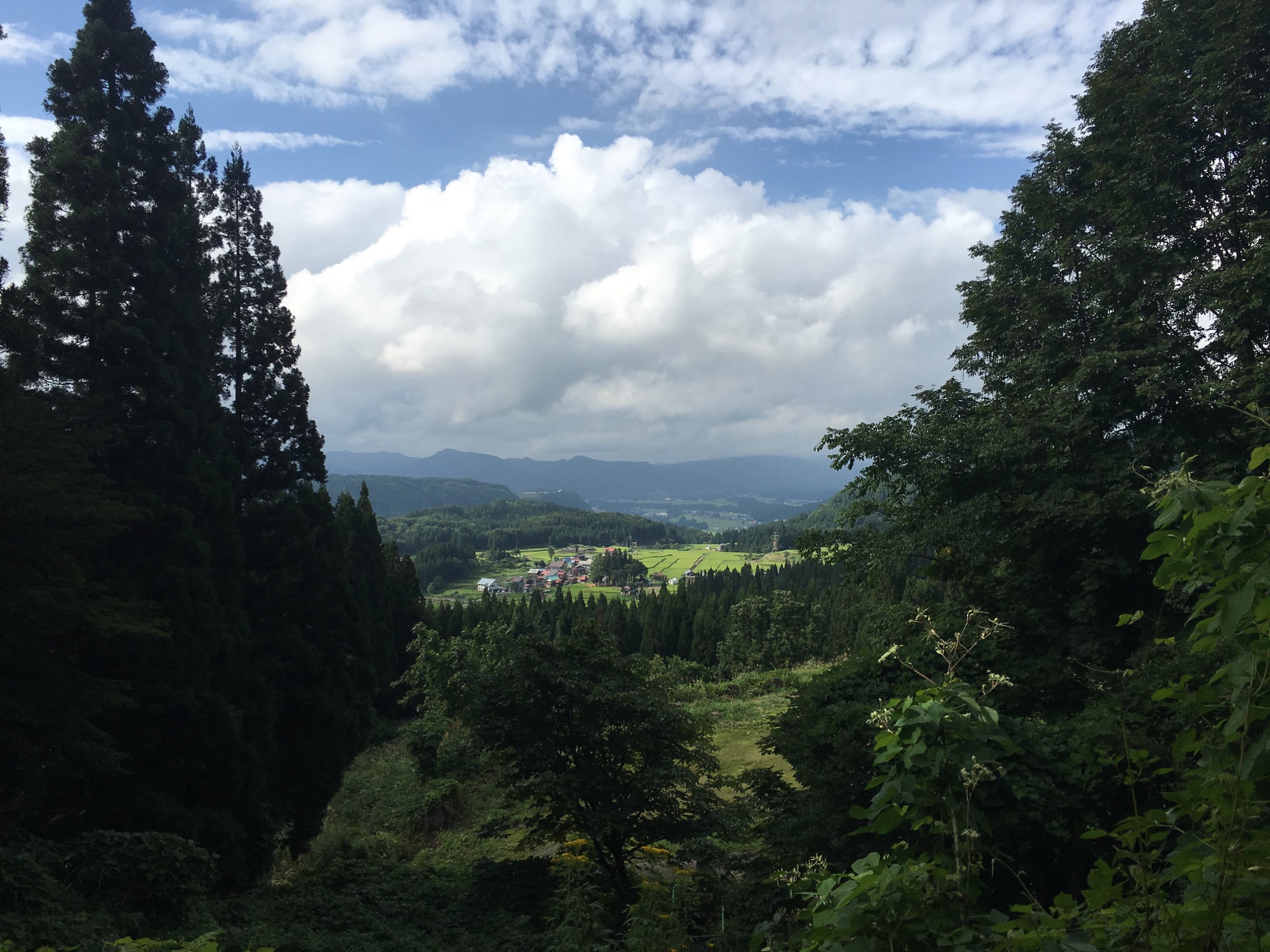 On the way to our new campsite the clouds parted, the sun came out, and we caught a glimpse of the picturesque Japanese valley below.

Our campsite for the second and third nights was a tad overgrown so we had to hack out a lot of brush with Kado-san's nata (なた). The campsite was right on the Kamagawa (釜川) near Tashiro (田代). I fished the river for a bit but the water was fairly warm and the fishing was not great so I went swimming instead. It was pretty humid, even sitting around camp you were soon covered in sweat. So the dunk in the river was very much appreciated. That night we hid out under the awning while spot storms spit rain on us throughout the night. 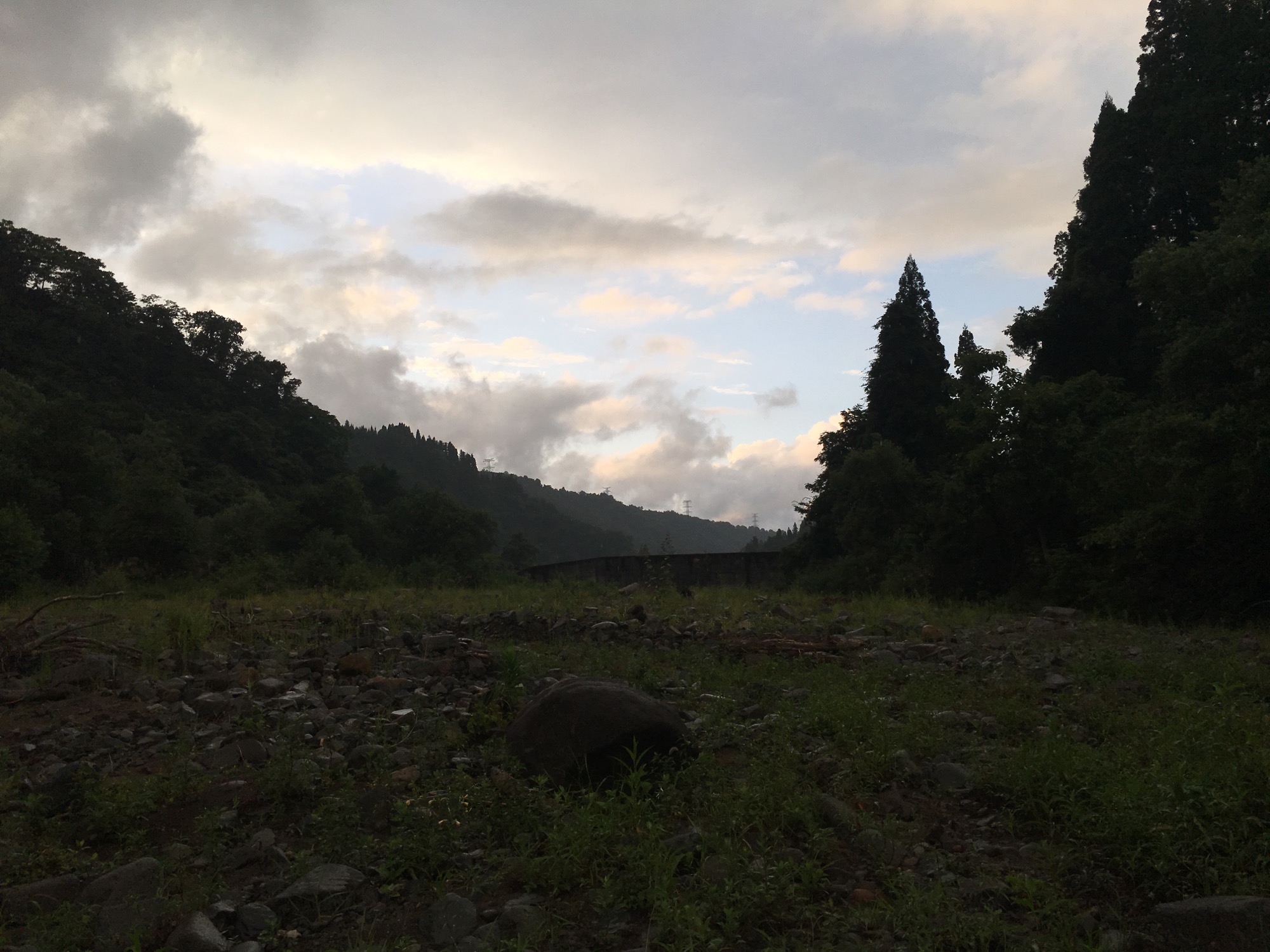 The next morning we were up bright and early. After a lazy morning we drove deeper into the mountains, donned our fishing clothing, and made our way further up the "road" on foot. After a very hot and muggy 45 minute hike we arrived at the river. Almost immediately we spotted fish but they were not to interested in our flies. After hiking up stream for a bit we came across a very narrow gorge choked with boulders. We had to do a bit of climbing, scrambling, and spelunking to get around. 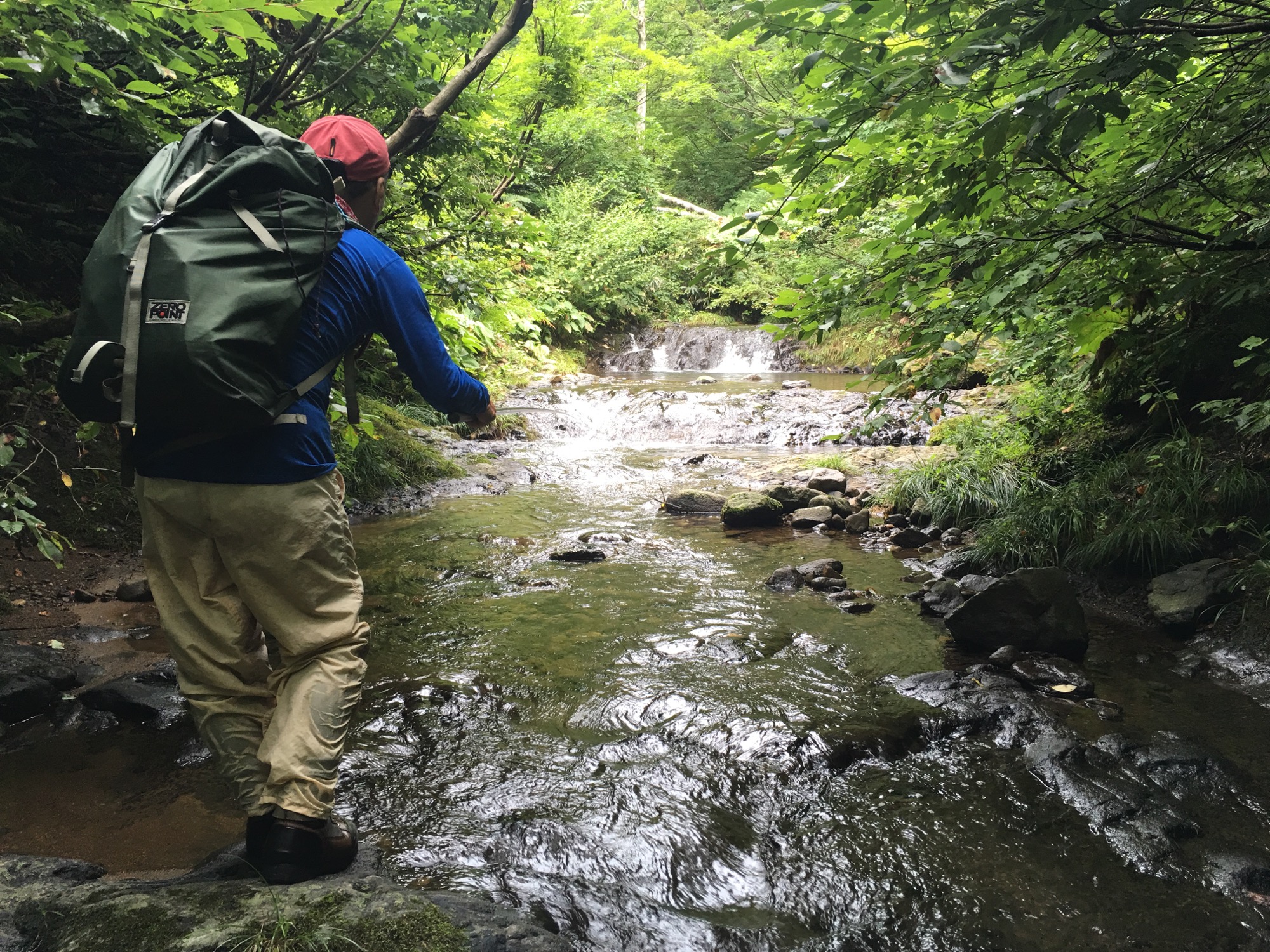 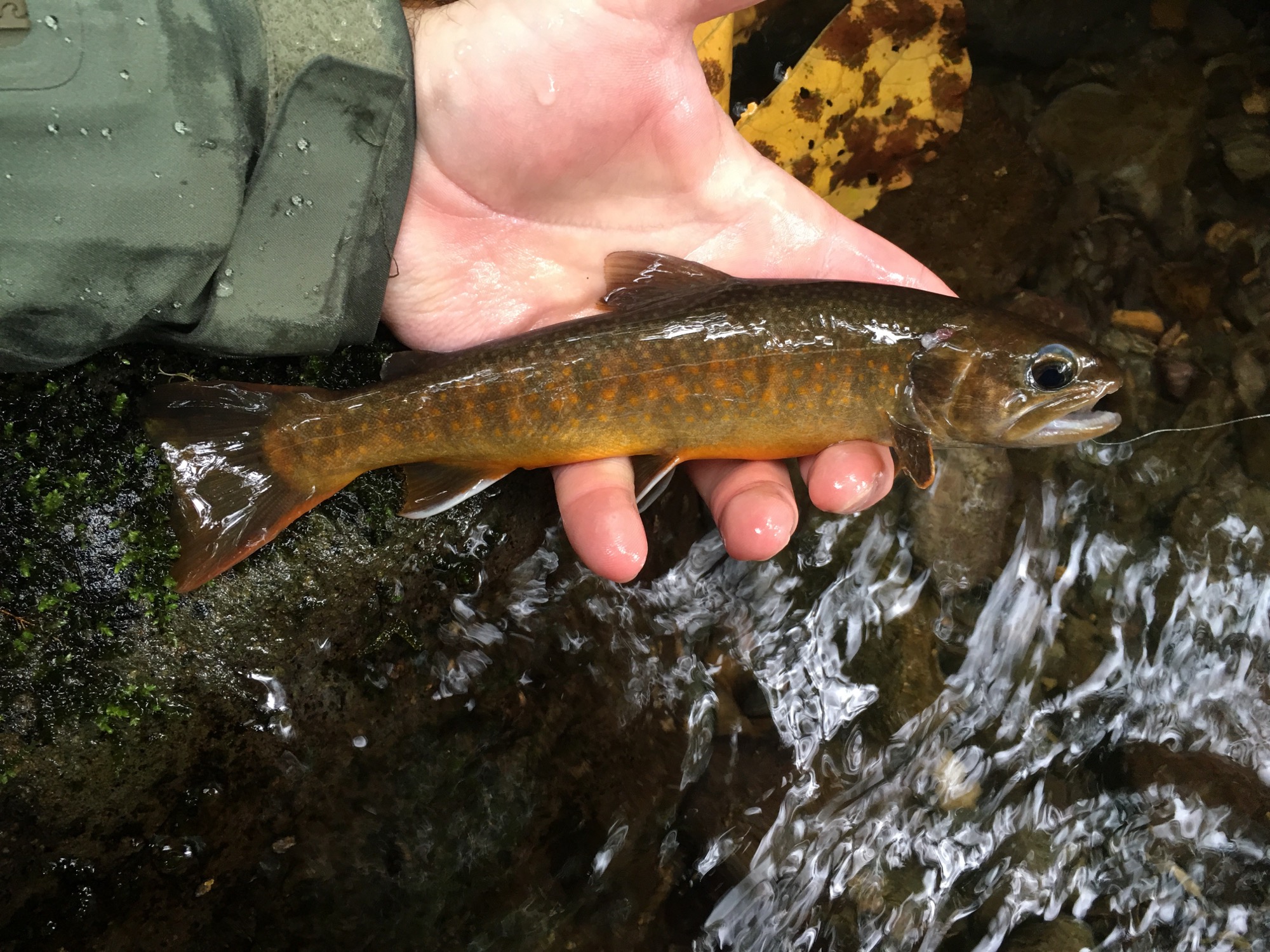 I love adventure fishing, it is one of the reasons why I have fallen in love with Tenkara. The mountains in Japan are a veritable paradise of small streams that are found in some of the most wild and stupendous locations. About two hours into the day, I was fishing a promising spot when a wild boar spotted us and plunged into the river and into the forest just in front of us. It happened so quickly that Kado-san did not see it. Still I am not sure if it was wild boar, it could have been a bear. For the rest of the day we stayed within eyesight of each other, just to be safe. 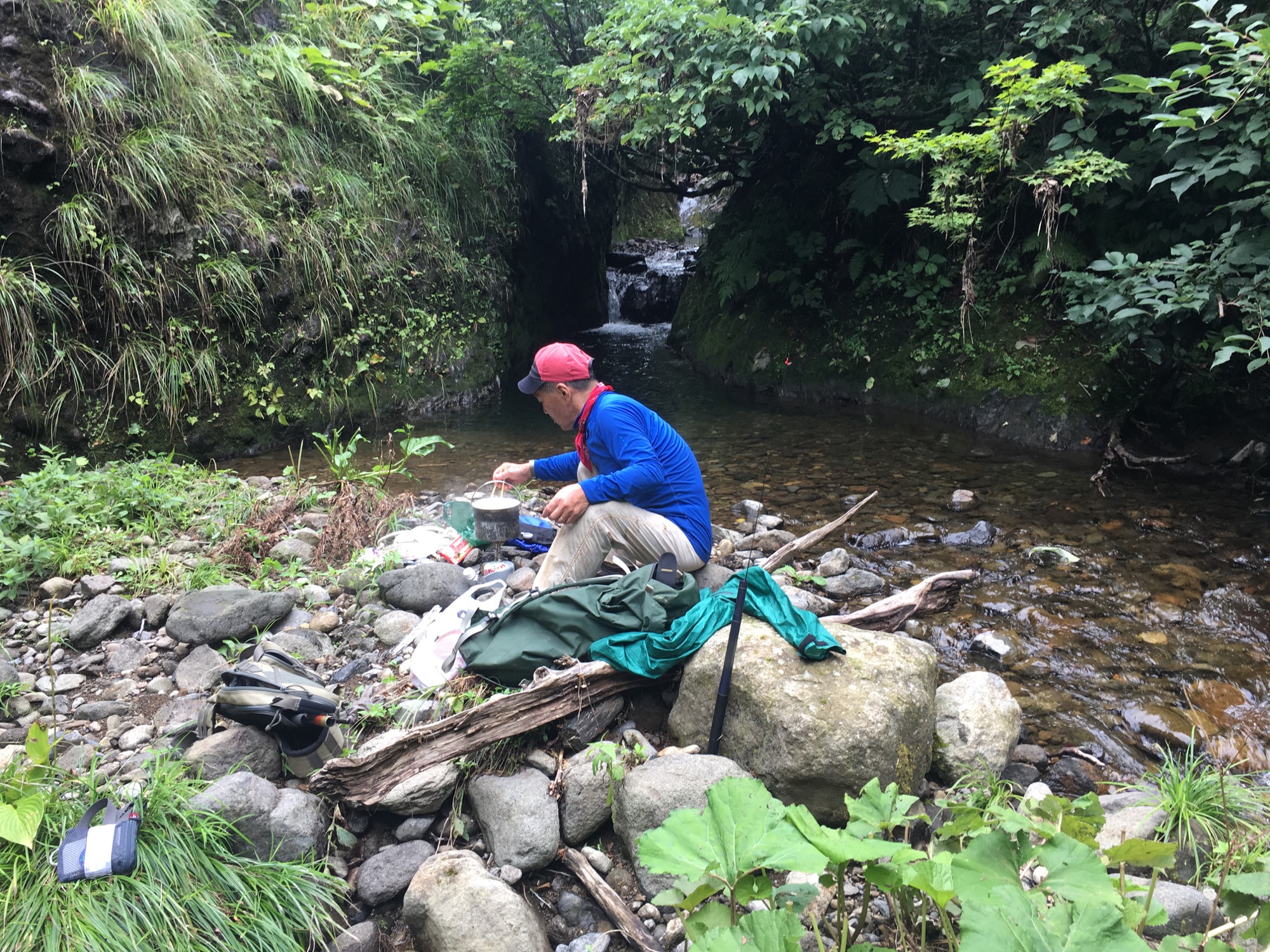 After stopping to make somen for lunch we began looking for a way around an impassable waterfall. Eventually we found a route around that required a hundred meters or so of class V rock climbing to get above and around the waterfall. The climbing was easy, maybe 5.1, but the adventure was thrilling. Safely back in the river above the waterfall Kado-san and I were giggling like schoolgirls with glee. The fishing above the waterfall was great but not in the way you would expect. We only caught one fish, but we did see a lot of large fish. However, they all seemed to be spawning - about 6 weeks early actually. Kado-san told me that when Iwana spawn this early it means that the winter is going to be cold and long. 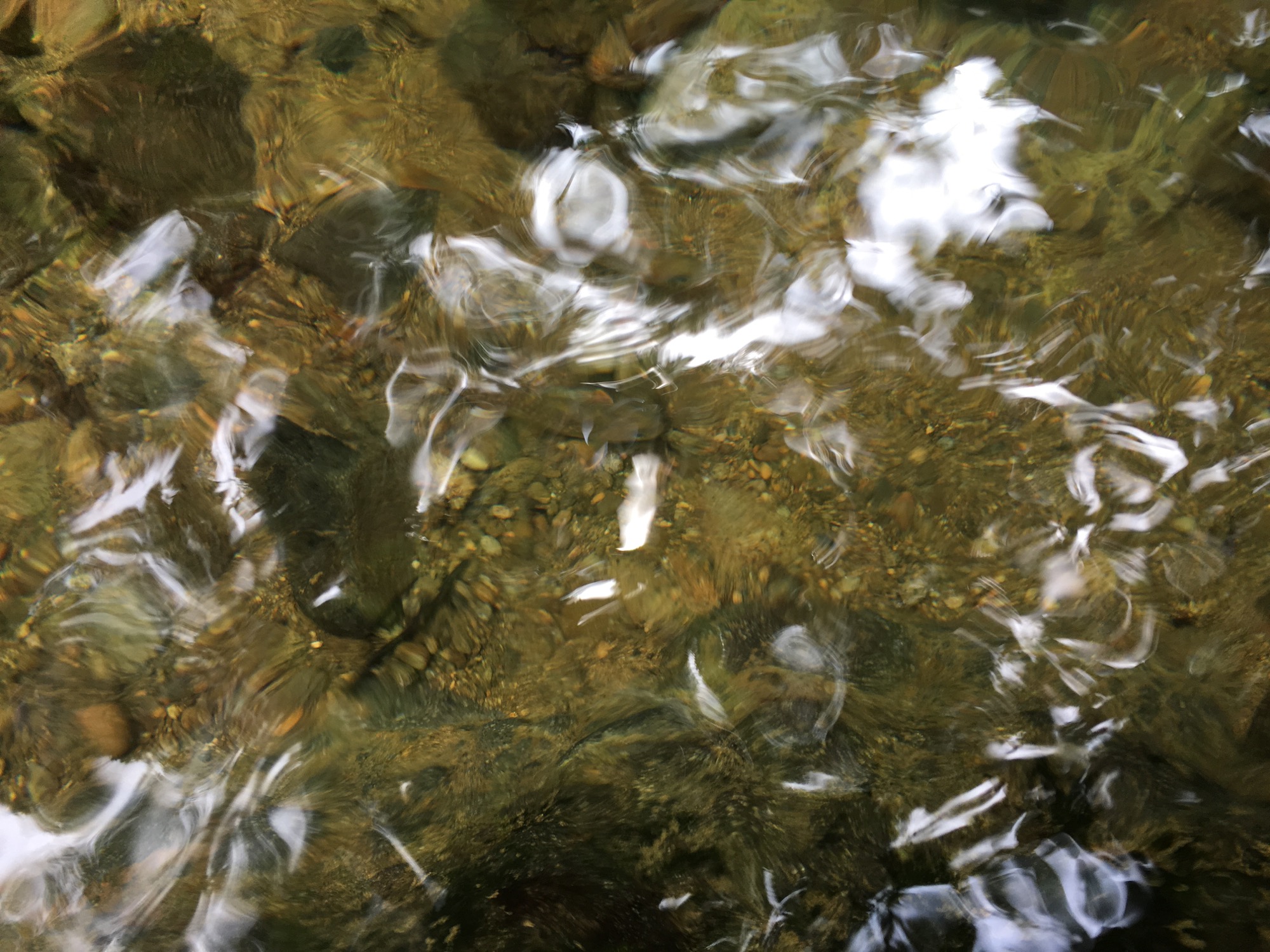 Spawning Iwana - a little hard to make out, but there are two...

After fishing for another hour or so, we turned around and made the long and difficult journey back to camp.

The next day we were pretty beat from two days of very physical Tenkara fly fishing and in desperate need of a nice soak in an onsen. So we packed up camp and made our way back to civilization. On the way we stopped and explored a few rivers for possible destinations next time. 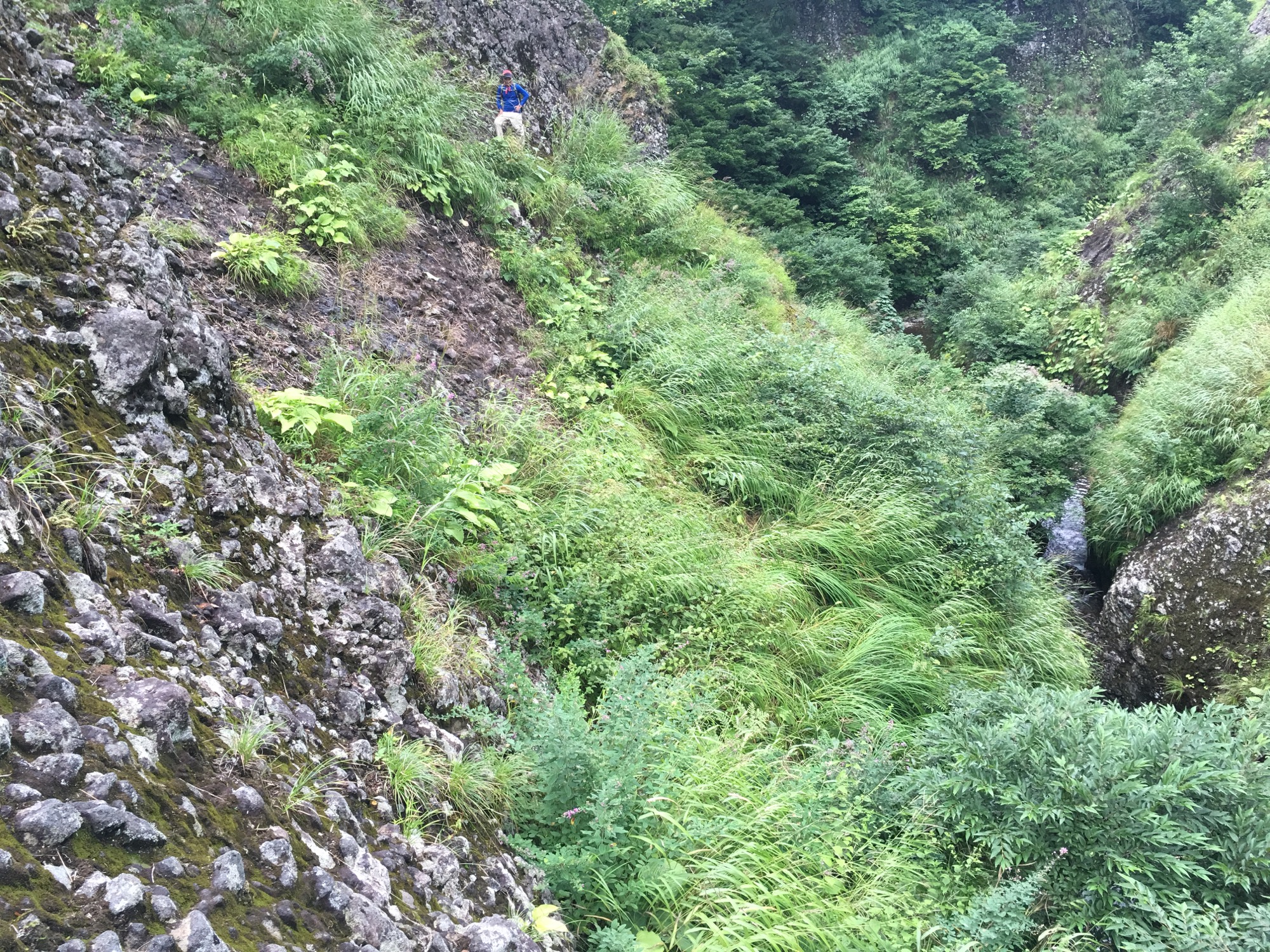 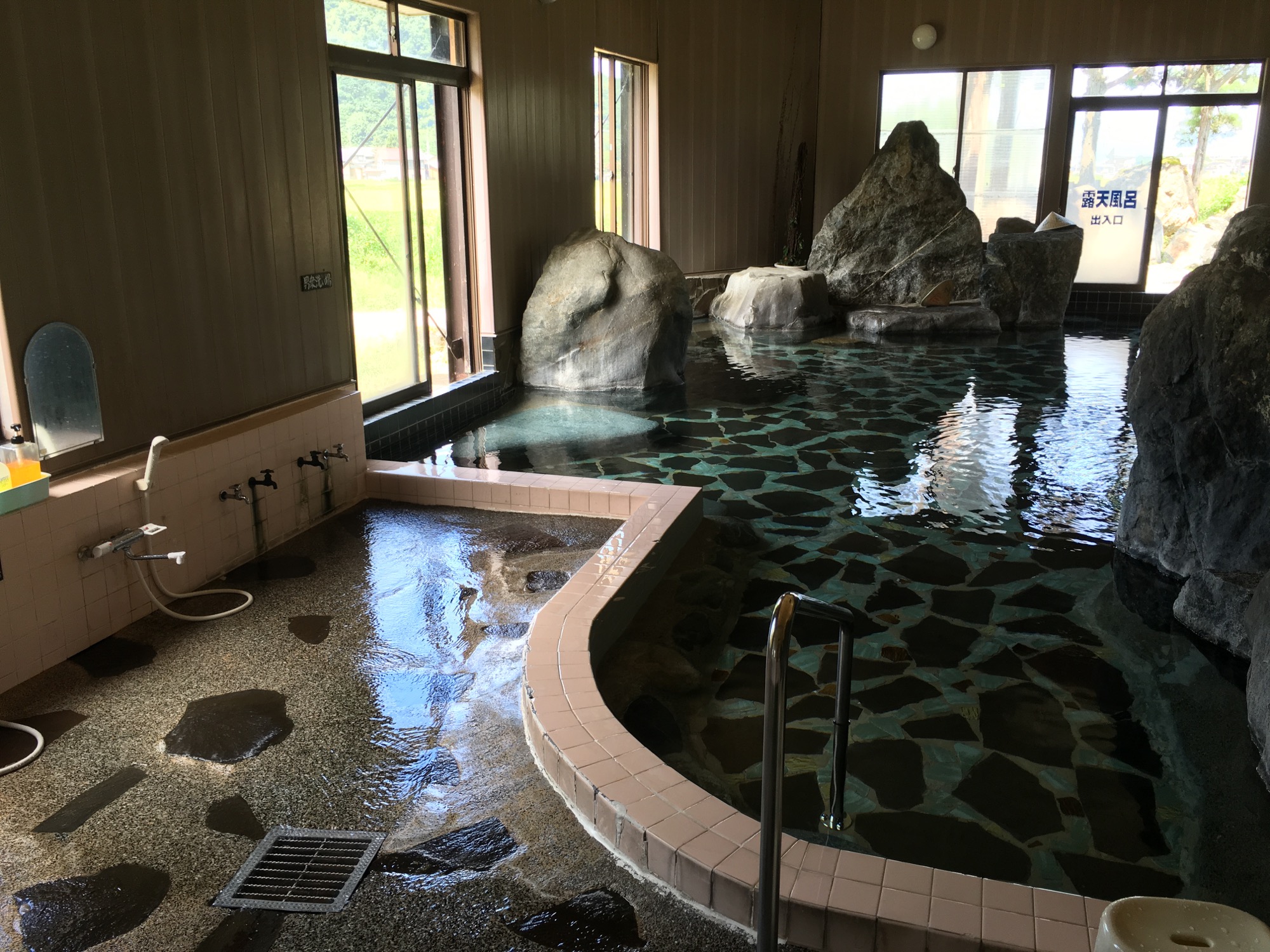 This had been the first time that Kado-san and I had been fishing together this season due to family health issues. It was great to get back into the mountains with my friend. Every trip we go on is better than the last (I really do not know how he does it!). On the way back towards Tokyo we started making plans for the next fishing trip in September, a three day backpacking trip - similar to what we did last year. 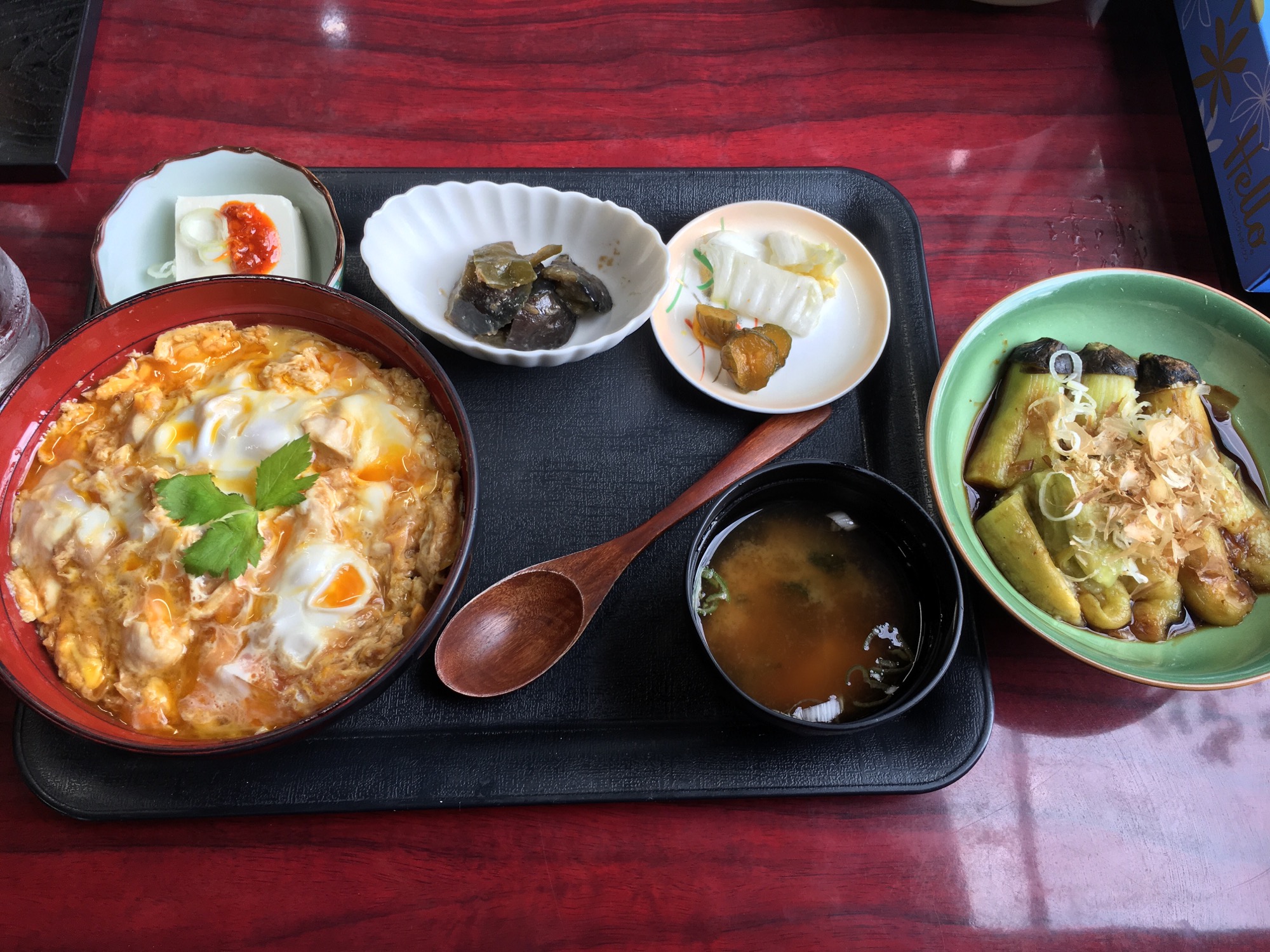