On the way home from my recent fishing trip in Nagano, my buddy and I stopped in at a locally made goods shop. I was looking for one thing in particular, a sugegasa (菅笠) - also known as a conical bamboo hat. Well lucky for me they had a bunch in stock! While the sweet obichan behind the counter was customizing the hat to fit my huge head I perused the shelves. Tucked in the back corner I came across a dusty box filled with wooden hand carved figurines. In the back of the box, I came across a hand carved and painted Iwana figurine. It was love at first site. I think they look pretty good together. 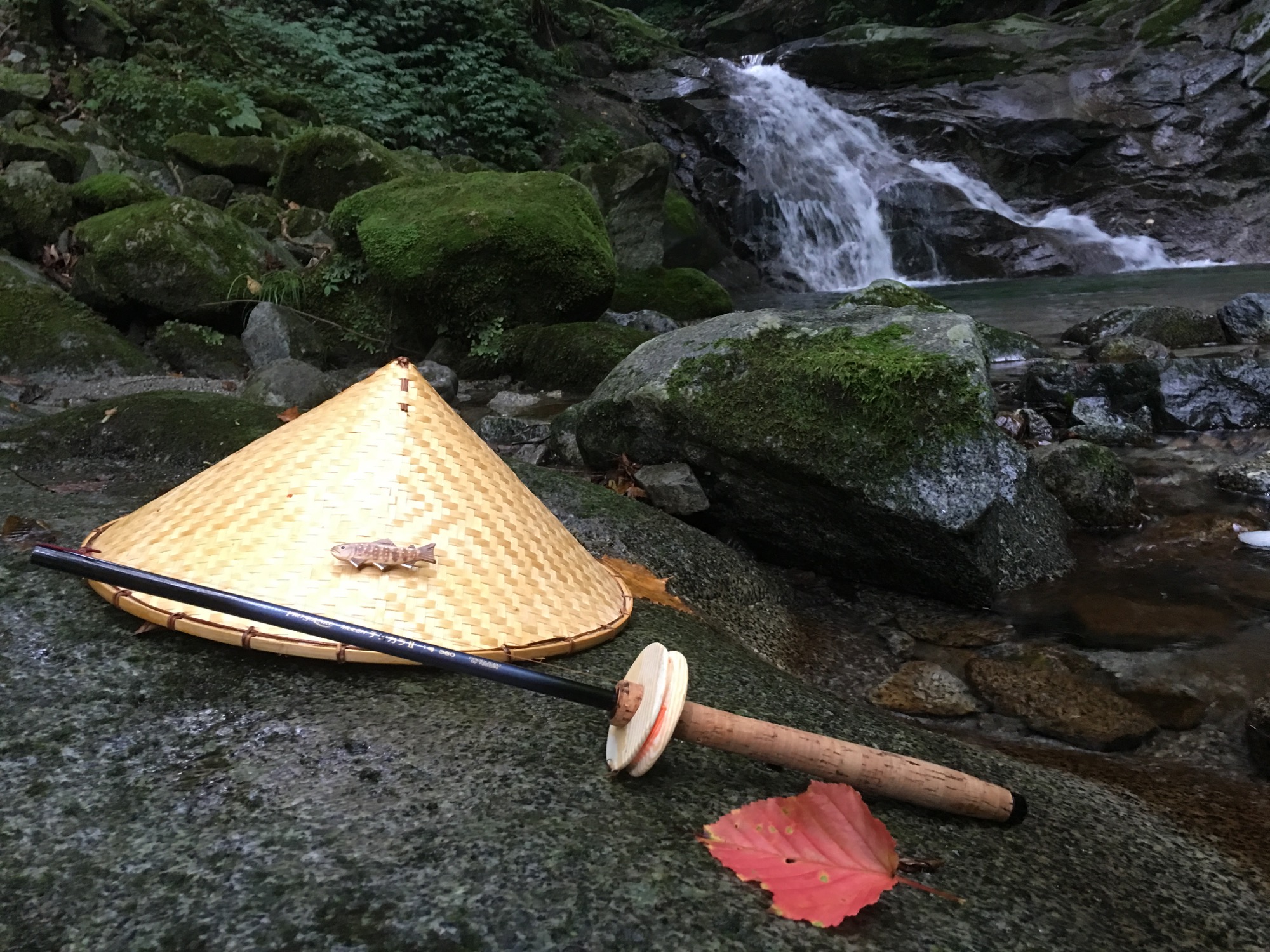 The head basket is a little itchy so I wear a bandana, pirate style, on my head. The sugegasa is surprisingly cool and quite comfortable too. I did knock the hat a few times on low branches due to the fact that it sticks a good 12cm above the top of my head. So there will be a slight learning curve with my new headgear. After watching this video I may start referring to myself as "The blonde beard who lives life with nature" 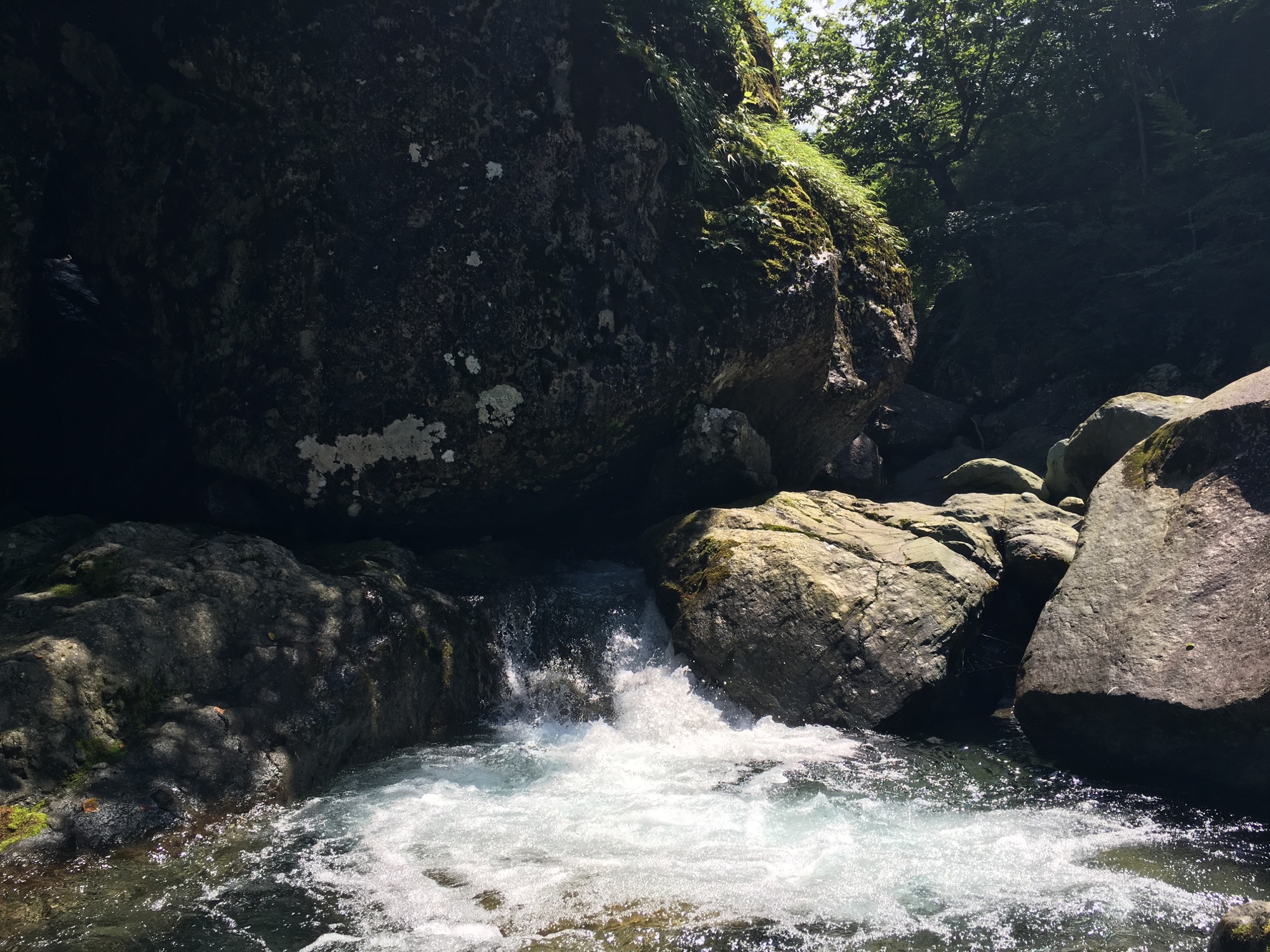 Anyways clothed in my Montbell fishing knickers, sawanobori gear, and now my sugegasa I am fully immersing myself into the Japanese Tenkara clothing style as made by popular by the great Sebata-san and Kado-san (my Tenkara sensei). I have yet to adopt the waders that Dr. Ishigaki and Masami typically wear. However, my fishing skill is still a long ways off from any of them. This was made especially clear to me during my recent fishing trip. 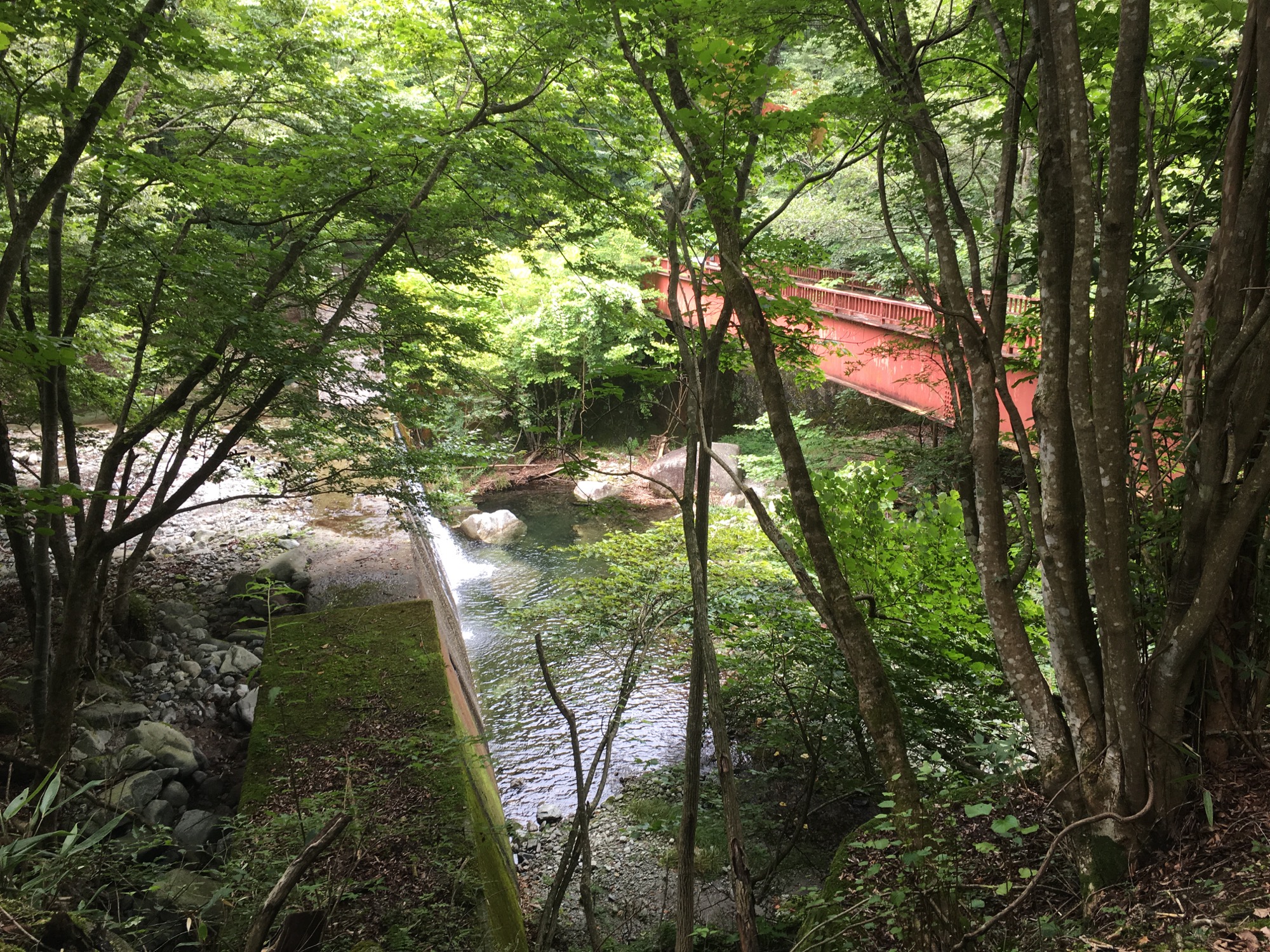 A long abandoned bridge stands an 'eternal' watch over the entrance to a keiryu paradise.

There is a network of valleys I have long wanted to explore, but being an extra hours drive away from where I normally go I have put it off. Until yesterday. In an effort to save ¥5000 in tolls I avoided the highways and took surface streets though. At 0500 in the morning the journey was quick and painless. However, getting home that night would prove to be pretty tedious. After a few hours of driving I turned up a windy mountain road, but after about 20 minutes of driving I realized that there was not a convenience store in this valley (they do have three car dealerships though). So begrudgingly I turned around and headed back into town to buy breakfast and lunch. As I drove back up into the mountains I came across hundreds of tents pitched on every flat section of river and all the campgrounds were filled to max capacity. I had overlooked the fact that the day before was the newly created Mountain Day holiday. Consequently, folks descend into the mountains in droves for the four day weekend. As I have come to discover fishing during a national holiday is a really bad idea. The rivers can take a week if not a full season to fully recover from the decimation that descends upon them from the stampede of anglers. Since I was already there though I kept my fingers crossed that I would luck out. 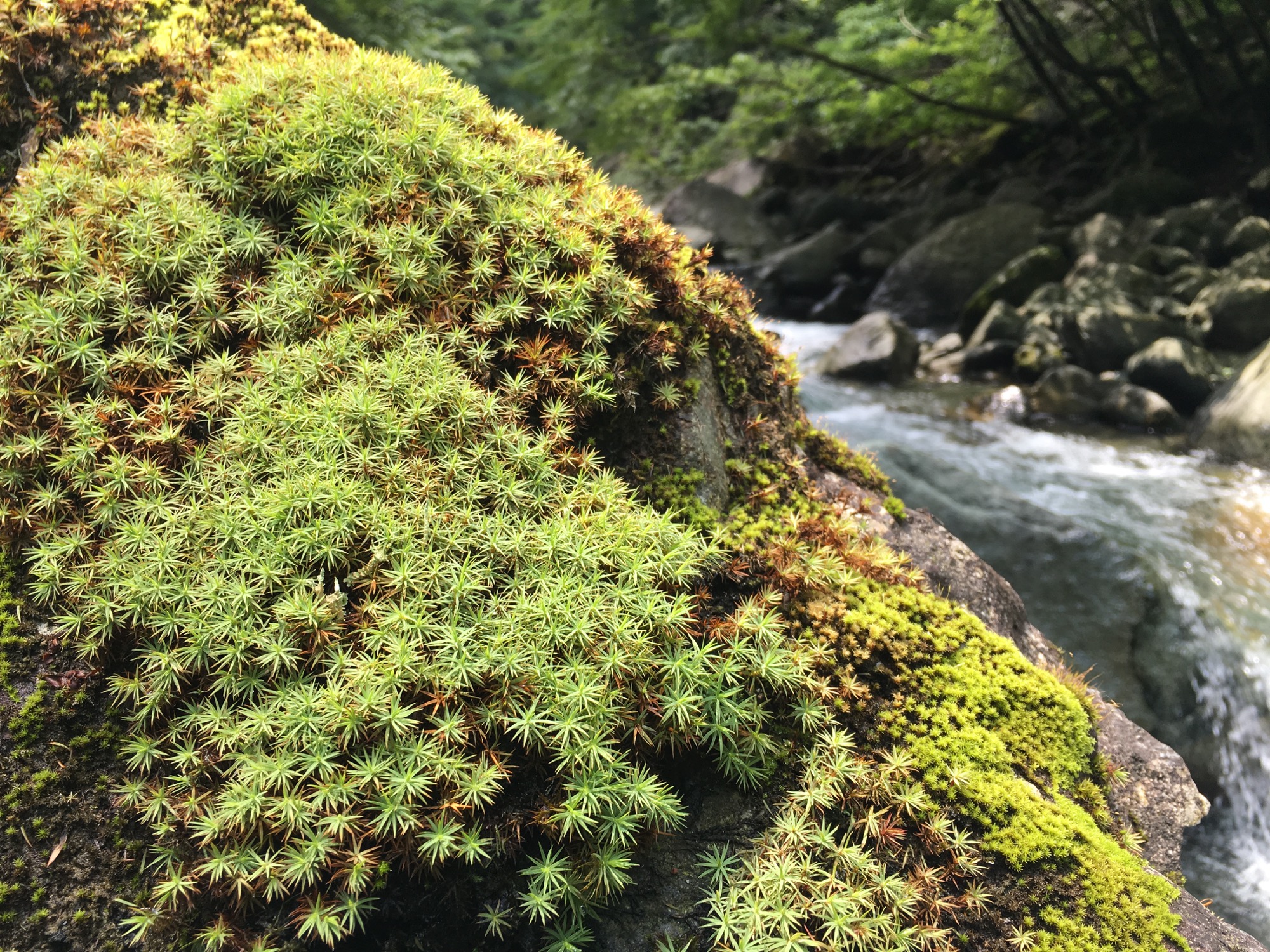 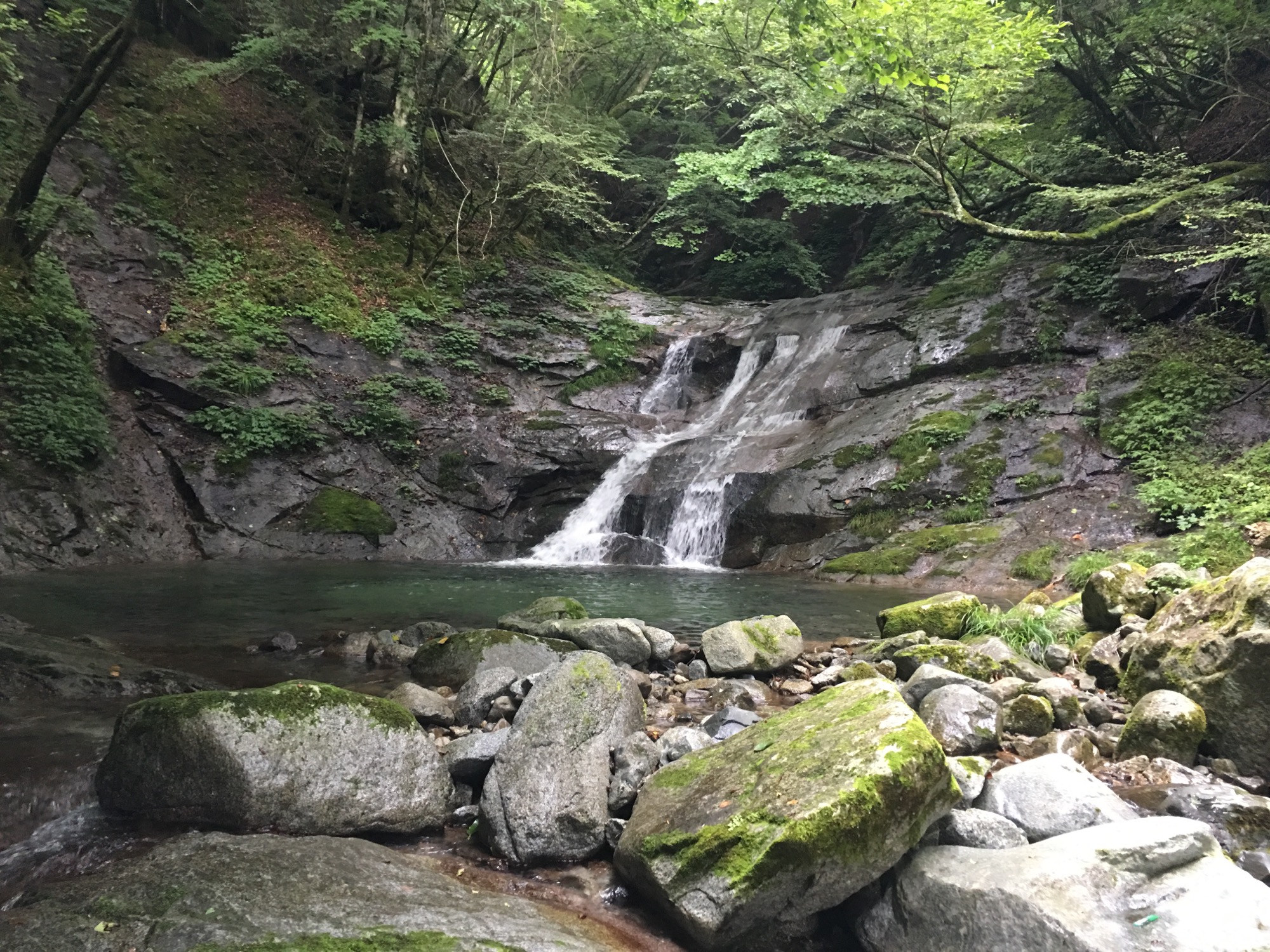 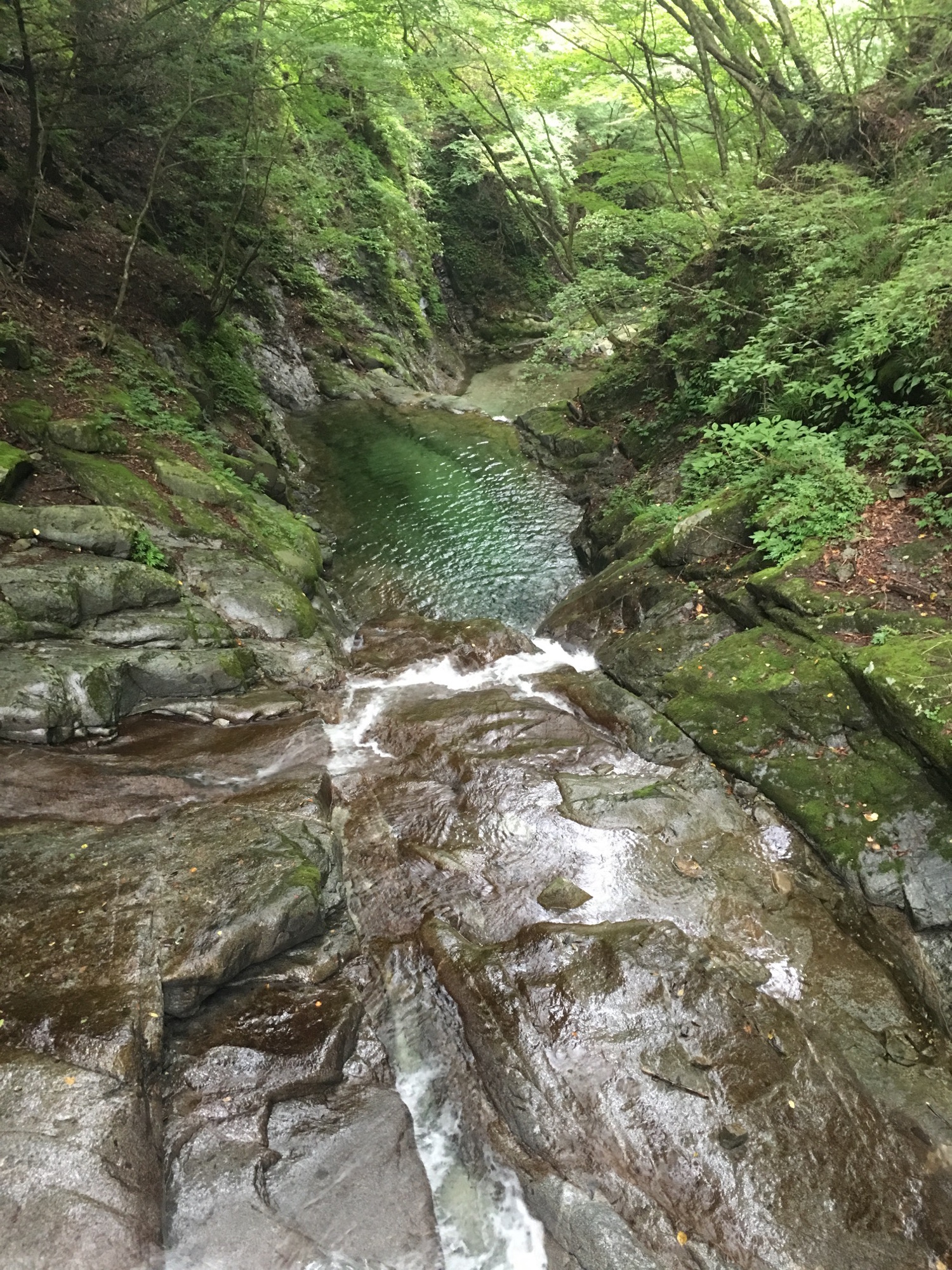 As I made my way up the river, I did see a lot of small Yamame and maybe even an Iwana or two. There was also several sets of footprints in the gravel banks by the river. Still the fish were biting and I had several fish that got off when I was reaching for them (I really do need to get a tamo). I did touch one though as he flopped back into the water so at least I caught one. The frustrating part of the day was that every third cast or so I would get my line caught in a tree branch. My casting technique was off the whole day, which was weird. I could not get the presentation or accuracy that I wanted and I was constantly getting snags, tangles, and losing flies. Right as I was about to turn around in frustration I came around a bend and saw a spectacular waterfall. It was not on my map, which I thought was pretty cool. A "secret" waterfall. 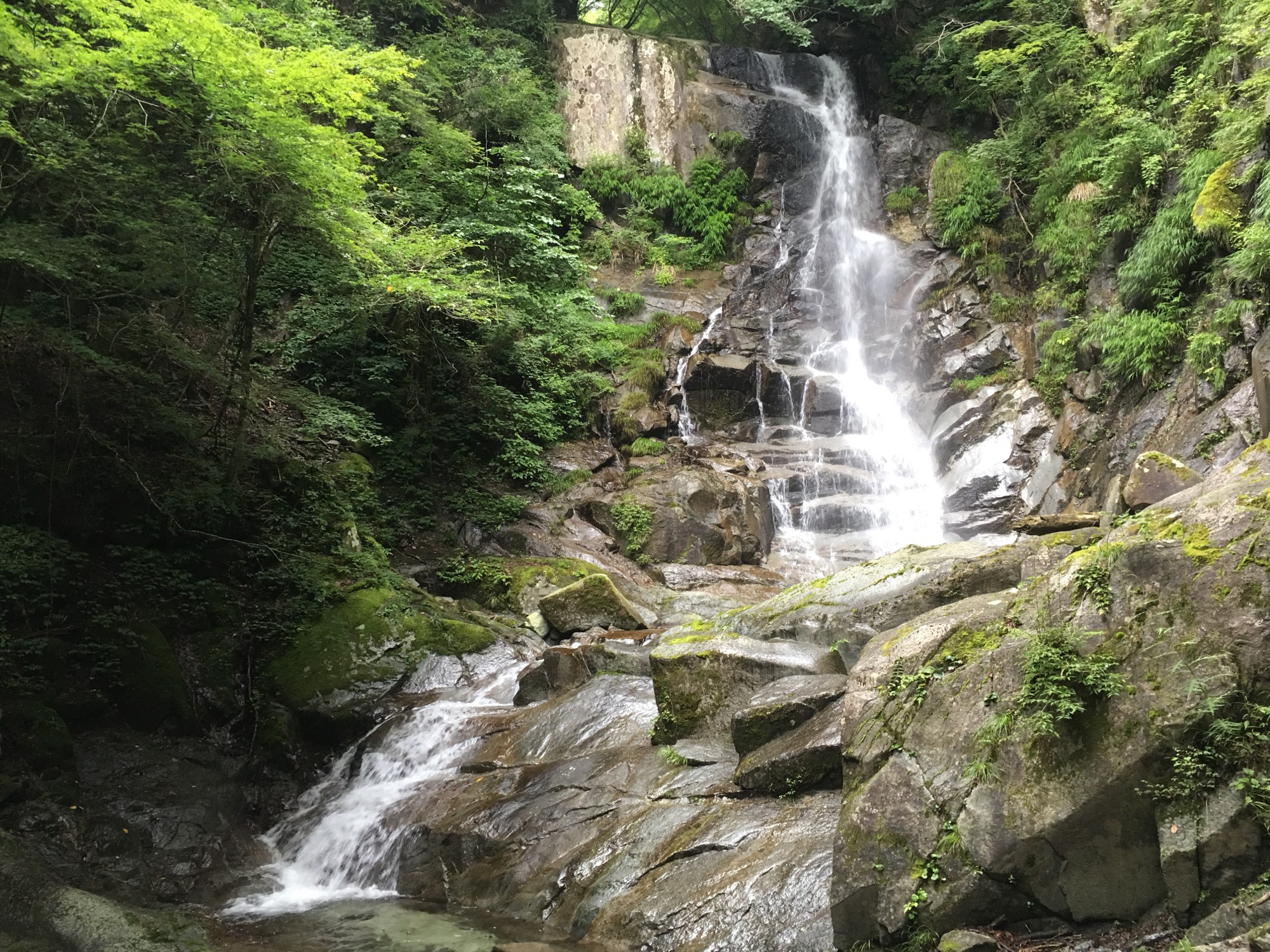 By happen chance I discovered a 5th class route up the side of the waterfall that was completely invisible from below. Above the waterfall there were many beautiful cascades and huge plunge pools. After fishing upstream for a bit I turned around because there were still a few other rivers I wanted to explore. 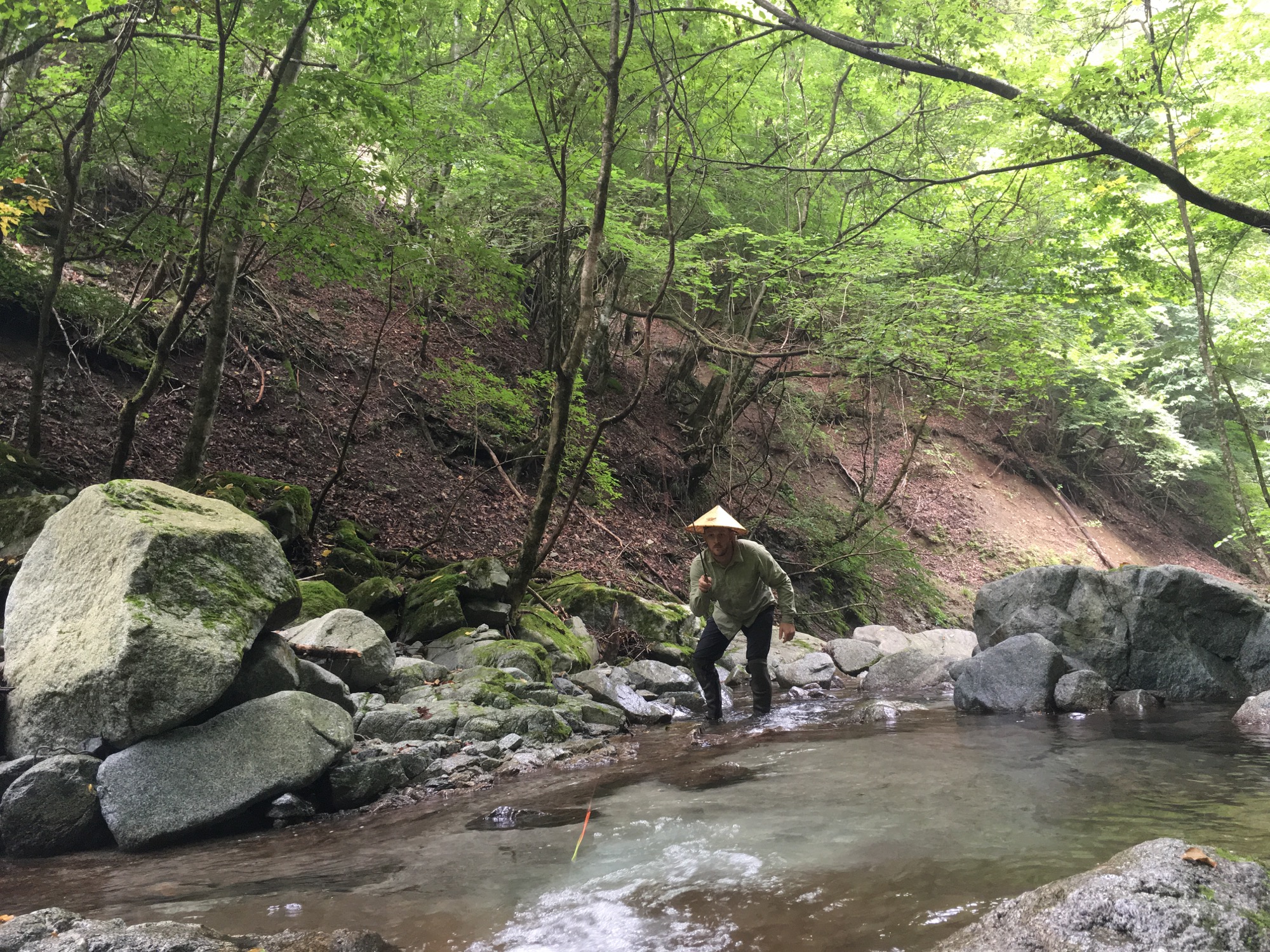 The second river I just was not feeling and gave up fishing after 20 minutes or so. It was right next to a trail and I suspected that it had seen a lot of pressure over the last few days. On the way back to the car I came across a small tributary. It looked promising so I went to take a closer look. Almost immediately there was a weir that was pretty tall and blocking my upriver progress. But there was a tree growing next to it, so I climbed the tree to surmount the dam. A short ways up the river there was another weir that had an old rusty ladder built into it. Still above the second weir was yet another weir. This one required a bit of waterfall climbing to surmount. Before I climbed it though I doubled back to the previous weir and recovered an old rope I had found there. 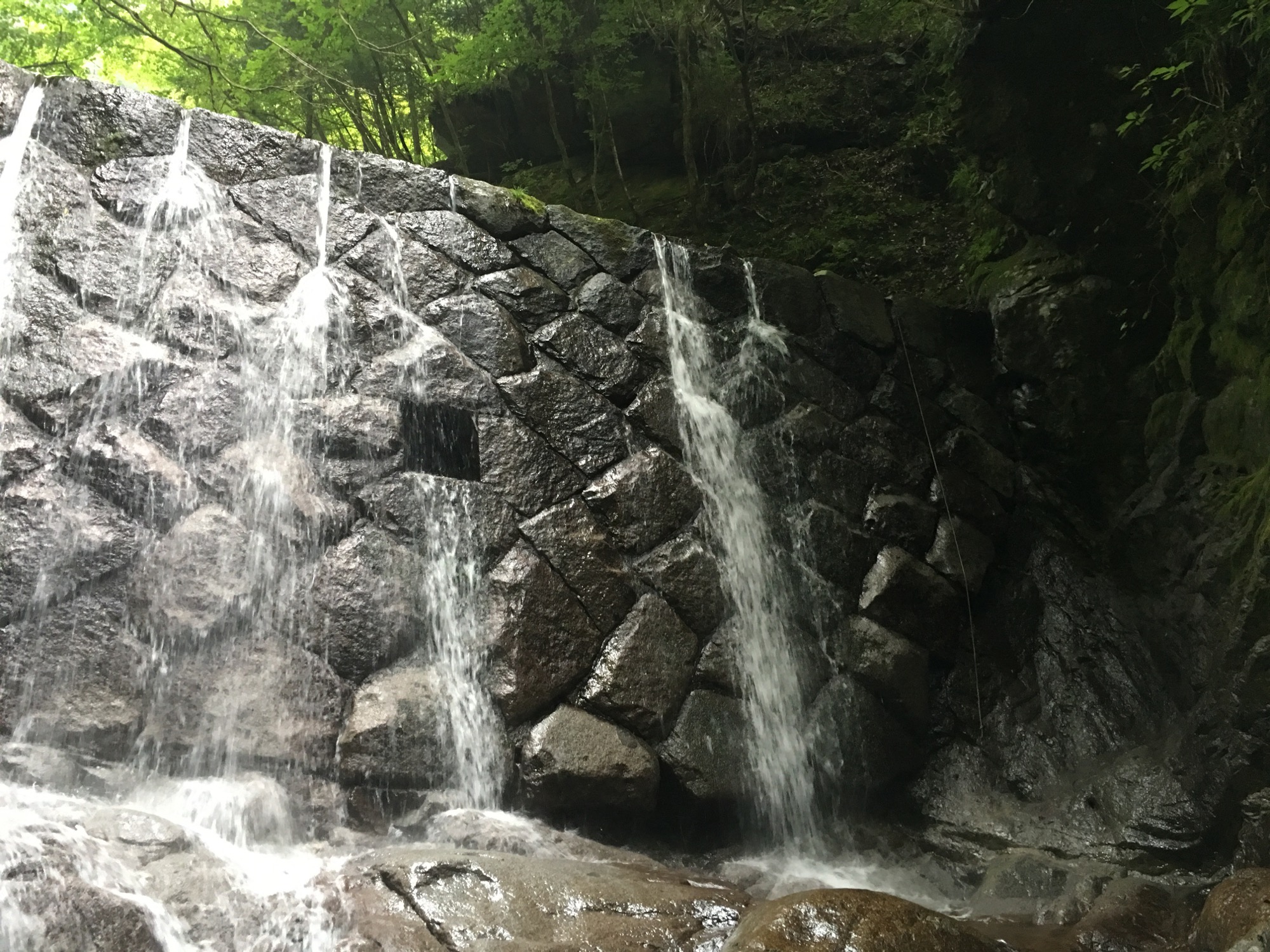 The second weir I came across on the third river I fished. Note: The rope that I fixed for the descent - the weir is about 5-6 meters tall

The river above these three weirs was awesome. There were perfect pools every 5-10 meters, there was almost no low foliage, and the water was very cold. However, I did not see a single fish or even get a single bite. I did come across an old campsite and a very corroded Tenkara line and fly, so obviously the river had fish in it at one point. It has been a very dry summer for Japan without a single typhoon having hit the Tokyo region. Last year there was a good 15-20 typhoons by this time last summer. Consequently, a lot of the rivers around here are lower than normal. Lake Miyagase is emptying rapidly. Perhaps last year was an anomaly and maybe this is just a normal summer, because no one seems to be overly worried about it. Whatever the case is I could tell that this river was flowing at a less than normal rate. Perhaps the fish had migrated downstream to bigger water? I am not sure really. While it was a fun river to fish it was a little sad not to see any residents in the river. 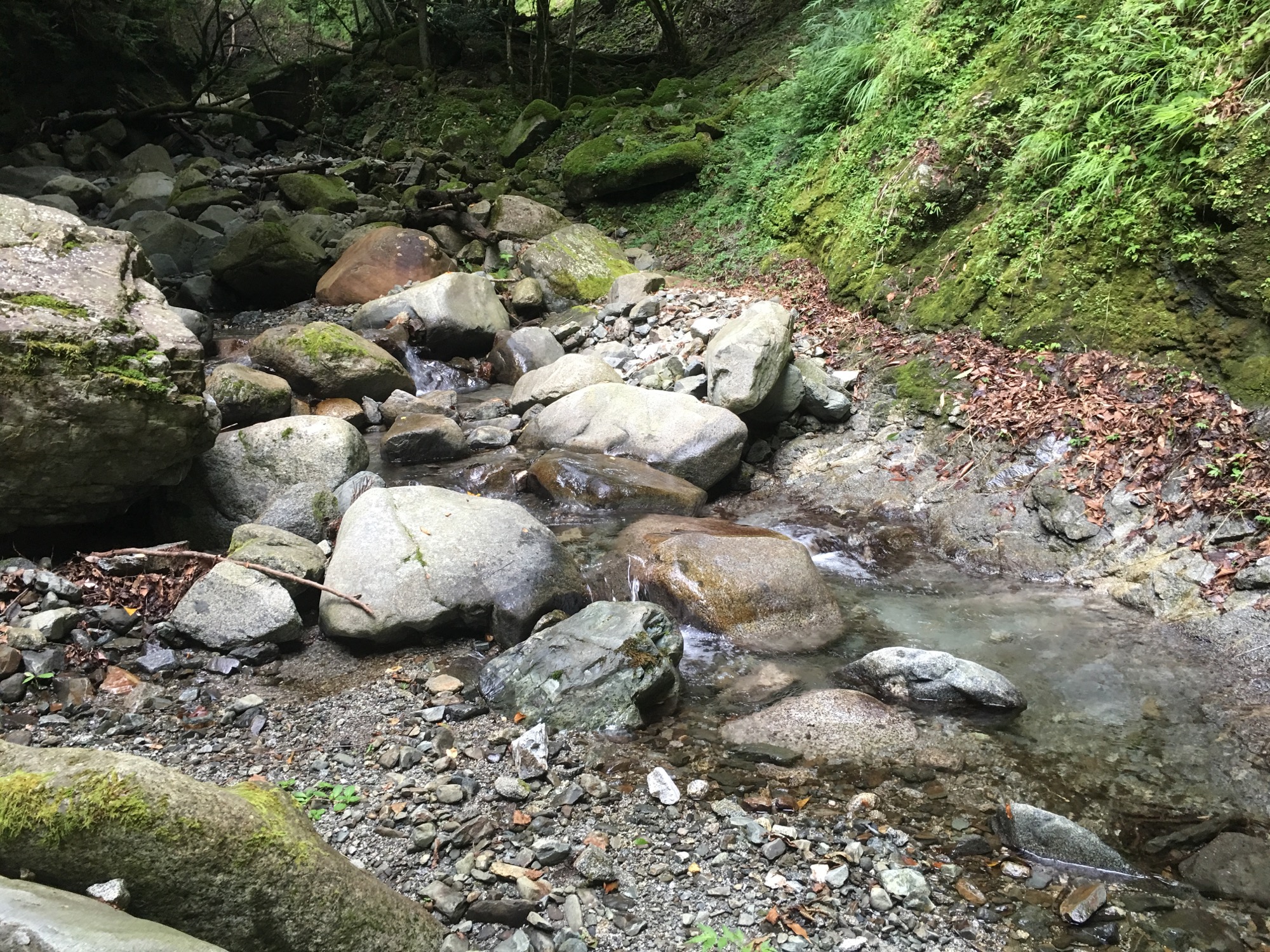 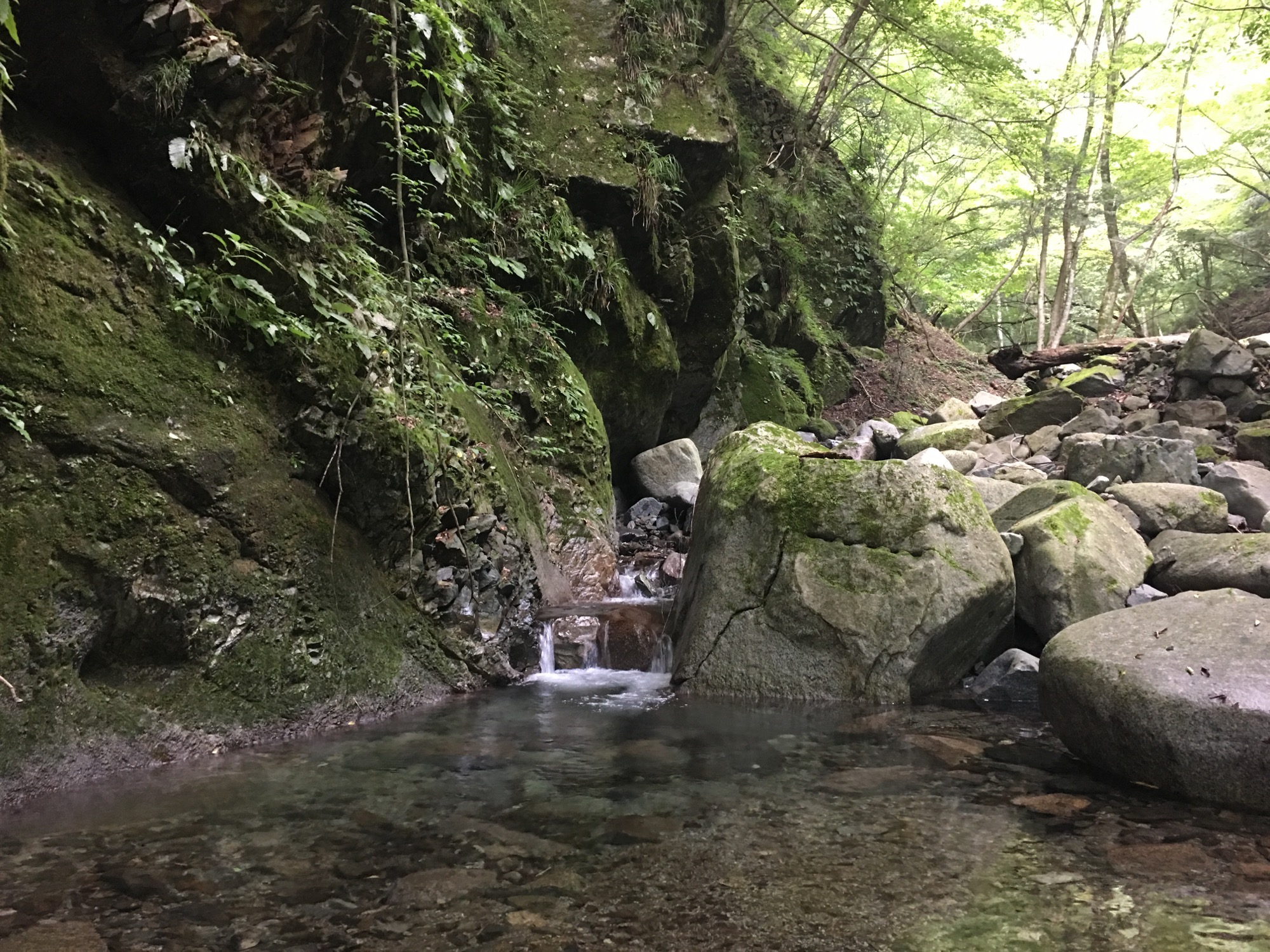 I really like fishing small water in Japan, so I was bummed to not see any fish. God willing I will head back next season just to check and make sure that there are not any fish here. 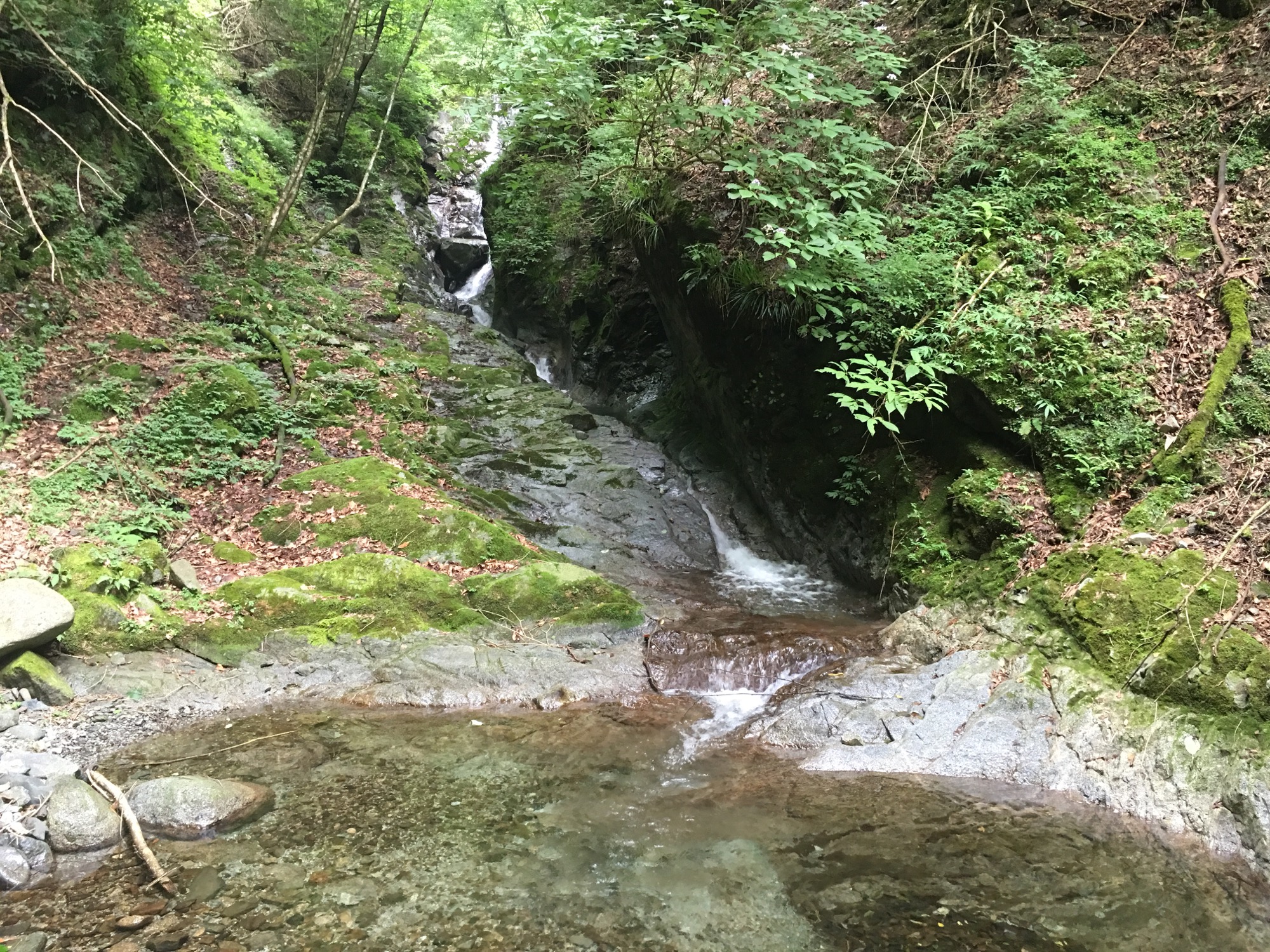 Lastly, here are a few photos from my fishing trip last week. The river was absolutely loaded with fish. I caught about a dozen Yamame and Iwana throughout the day using the fly that Yamada-san gave me. 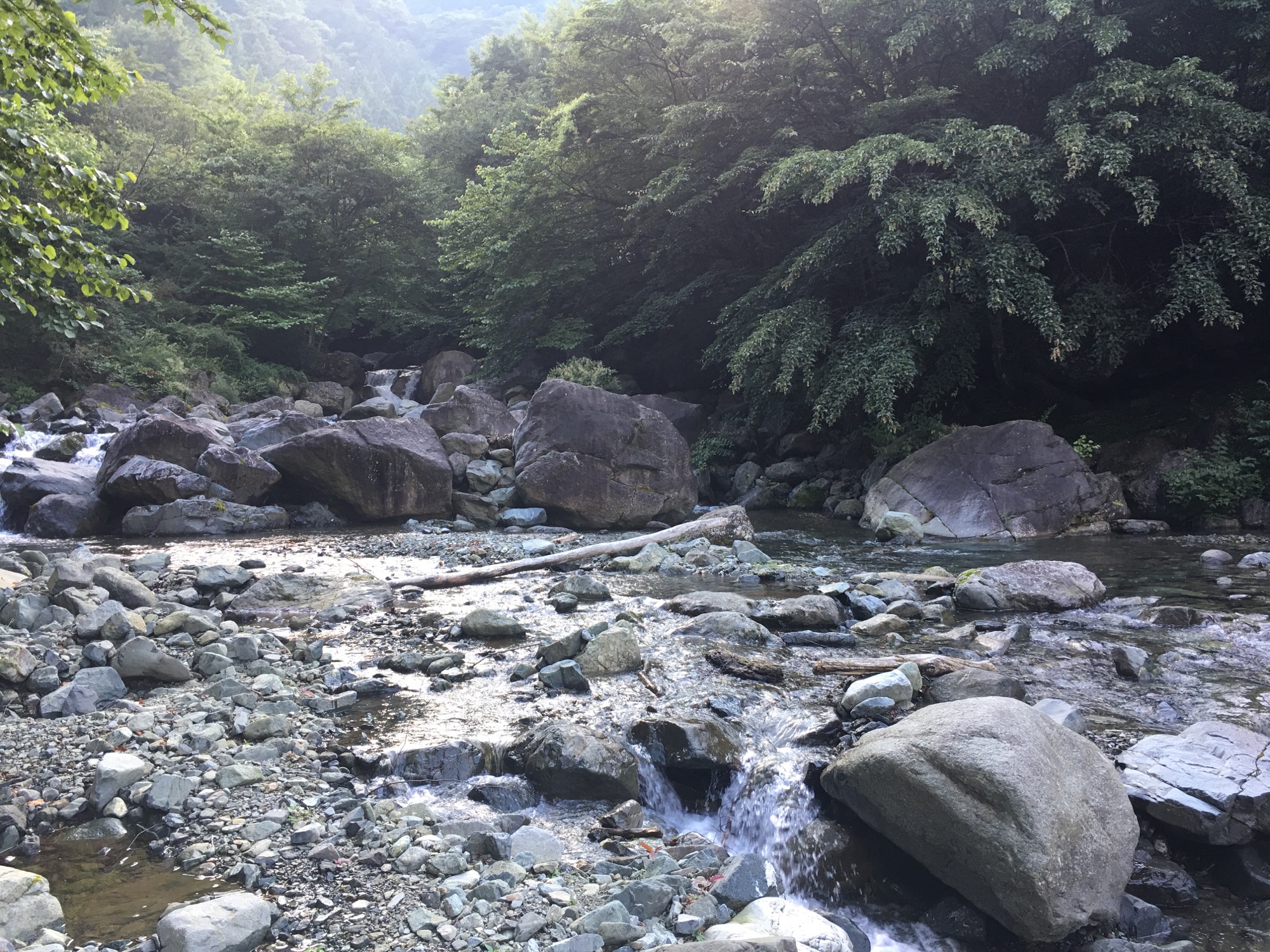 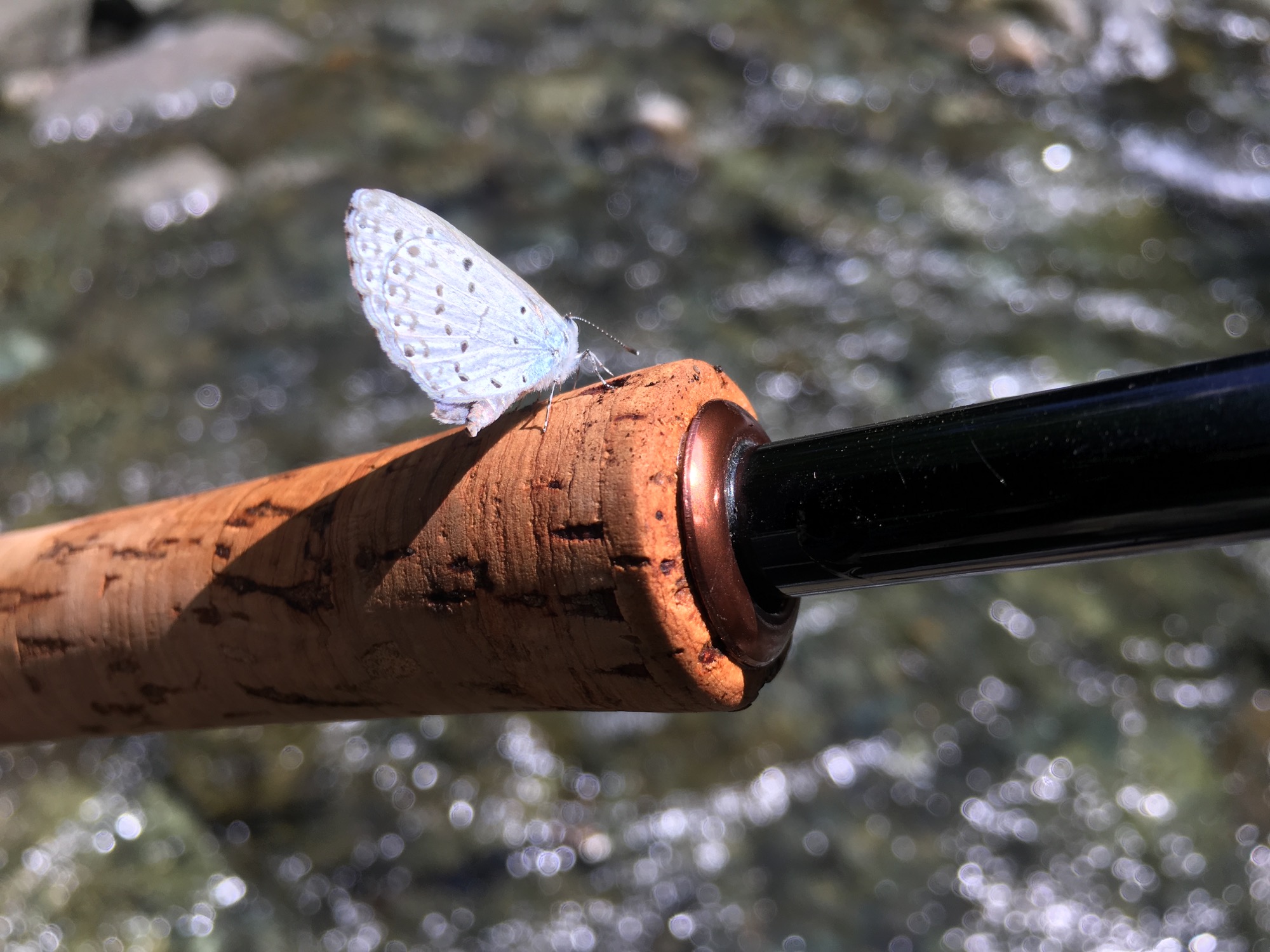