The mountains of Japan are a natural aviary, the perfect rest stop for migratory birds. The オオルリ(Oruri) also known as the Blue and White Flycatcher, is one of those migratory birds that makes the mountains of Japan its summer home. Due to the harsh winter climate in Japan they fly south to the Philippines in October and return to the Land of the Rising Sun in early April. 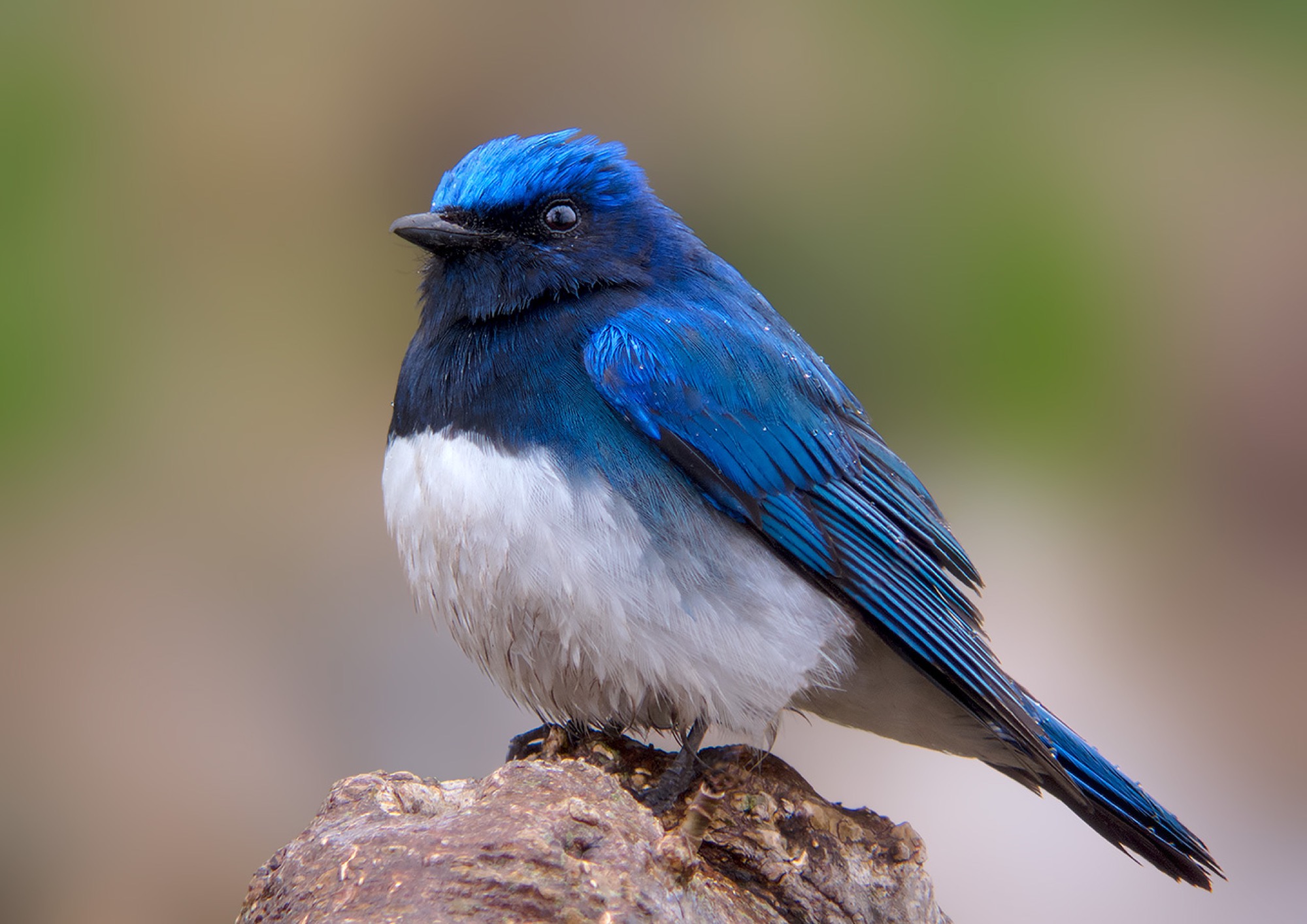 While I have seen a lot of オオルリ Oruri flying about before I had never heard them sing. That was until last week when my friend and I went on a scouting trip to a remote upper headwater in the Tanzawa Mountains. I think their song is quite beautiful and very striking. 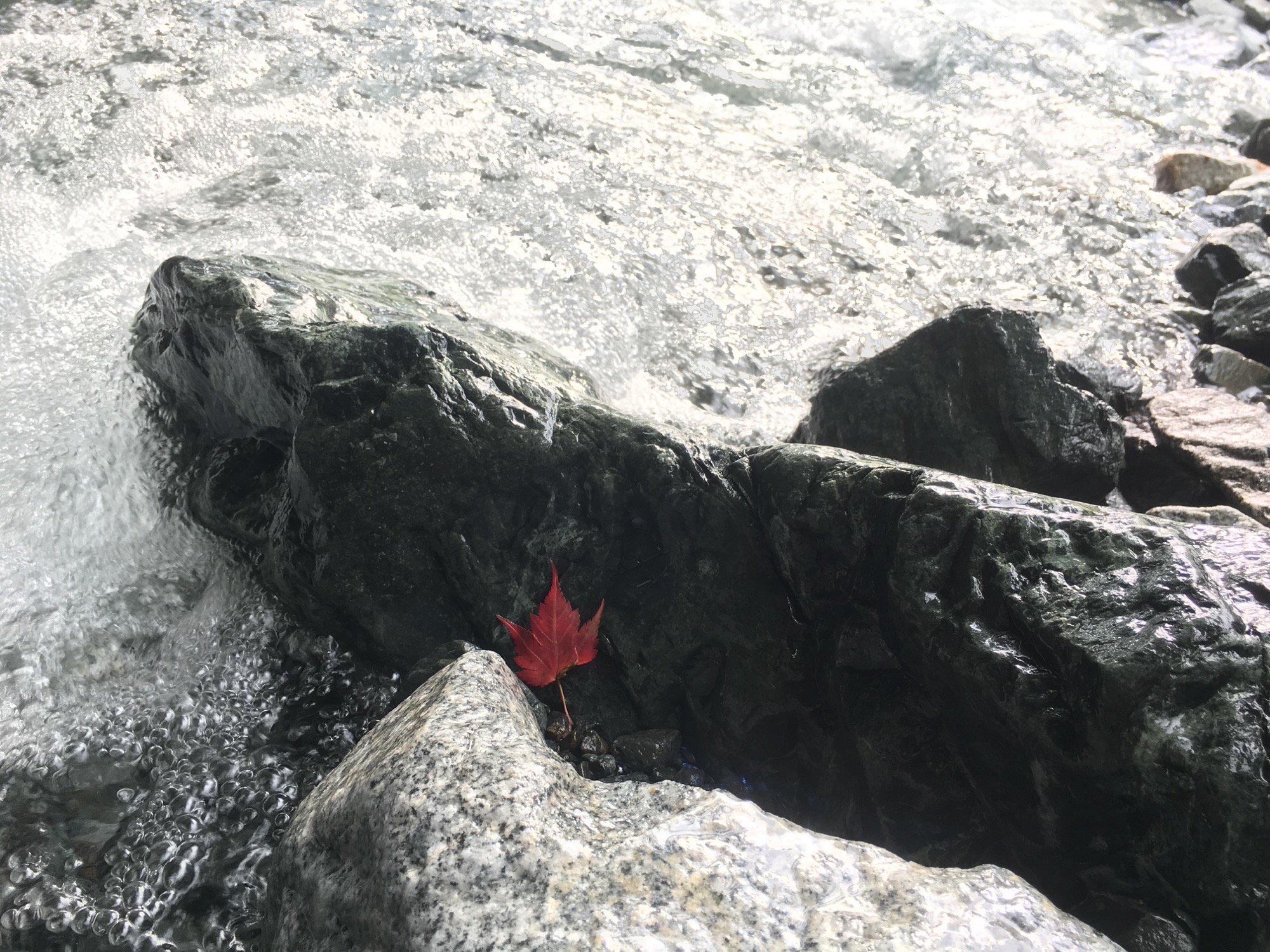 This particular keiryu is tucked away deep in the mountains, a tiny tributary of the Kouchigawa 河内川. The lower half of this remote keiryu cuts through a very steep and narrow canyon. Within the first kilometer or so there are over 50 waterfalls! Based upon the trip reports I came across the valley is quite popular with sawanobori folks. However, my friend and I did not have the gear nor the expertise to tackle the lower half. So I did some research and found mention of a seldom traveled foot path that skirted around the technical section to the less often visited upper portion of the river. This "path" started around 550 meters and summited three peaks culminating at 1031 meters before descending into a side canyon. It looked simple enough, a lot of elevation gain but it looked doable. So the night before our adventure I set my alarm for 0400 as to capitalize on the cooler morning temperatures for the hike in. 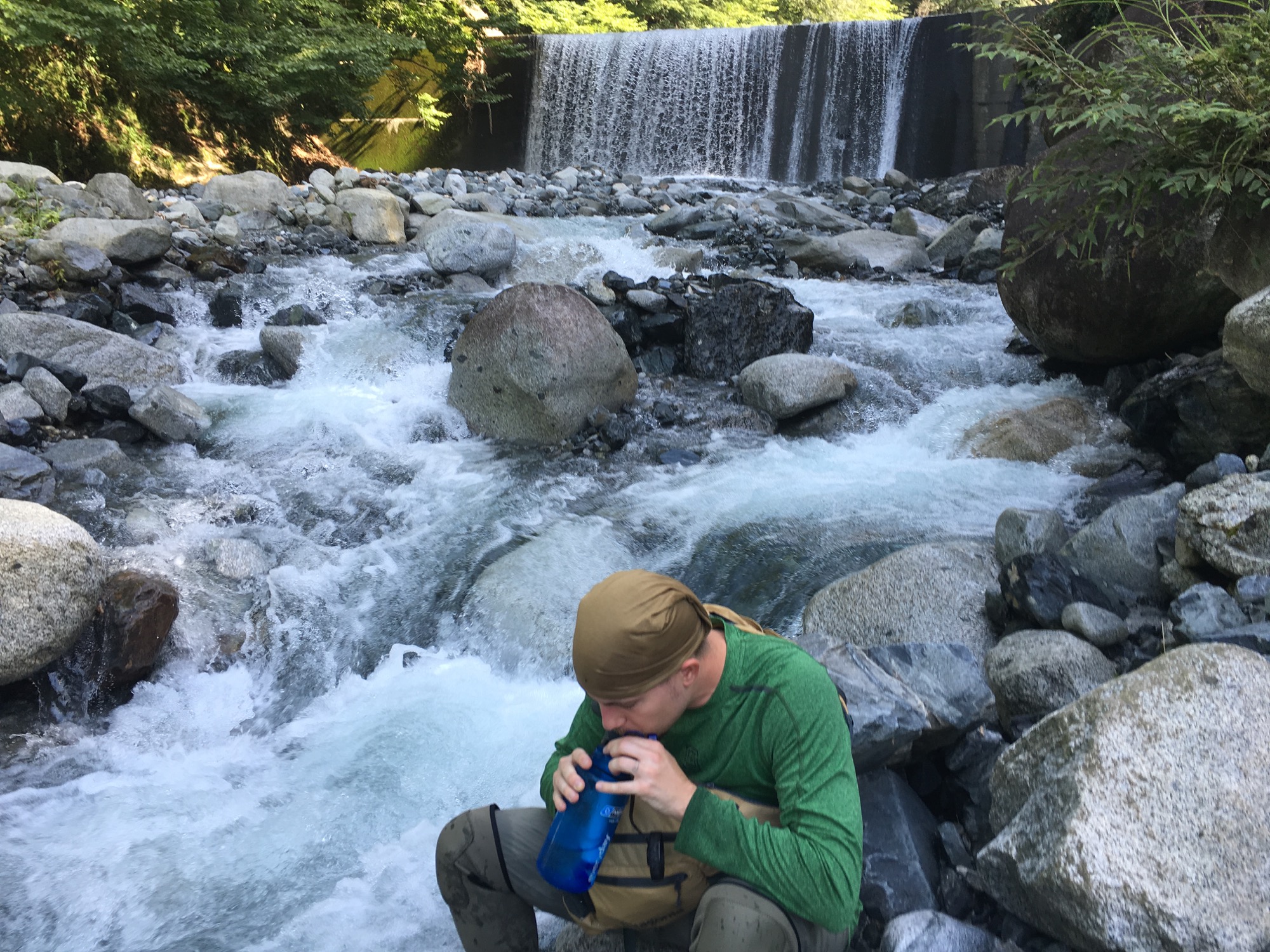 The next morning we departed Yokosuka at around 0515 and about two hours later we arrived at the "trail-head". We parked our car by the gate, donned our gear, and peddled our bikes up the closed road. After a pleasant ride we stashed the bikes in the forest and descended to the river where we located the bypass "trail". Before we began the climb though we filled our bellies with water and one canteen for the hike. It was going to be a while before we came across another water source. 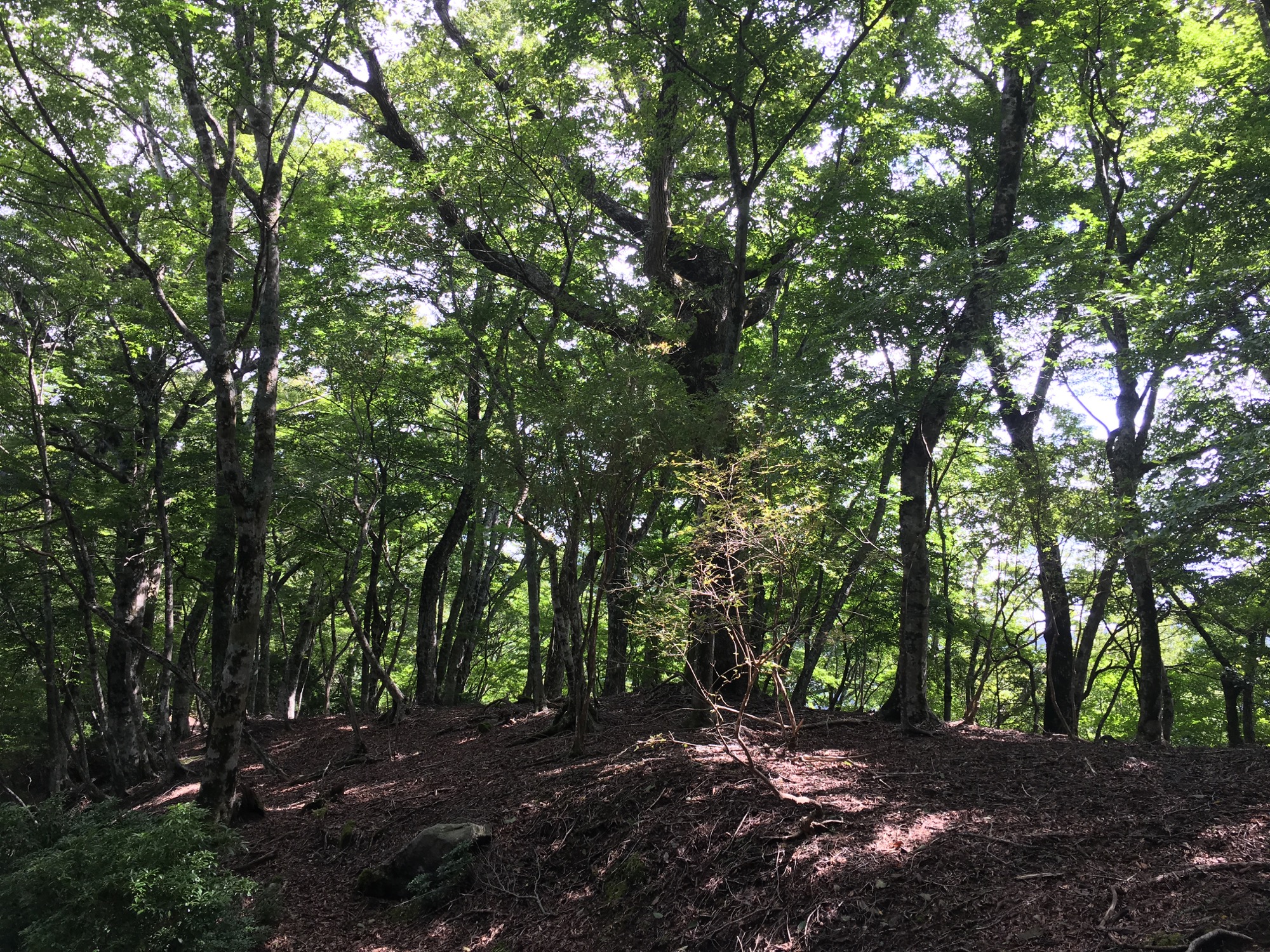 The first two peaks came and went without a hitch. The trail disappeared and reappeared numerous times but following the topography and a map with a GPS track overlay that I had found the going was fairly straightforward. However, after summiting the second peak the terrain became much more overgrown. Thankfully we had the pleasant bird calls of the オオルリ Oruri to keep us company. The fun was still to come however because between the second and third peak was a distinct notch marked with some very tight lines on the topo map. My research had mentioned ropes but it did not look that bad from the few grainy photos I could find. When we got to the ropes I realized that I was grossly misinformed. 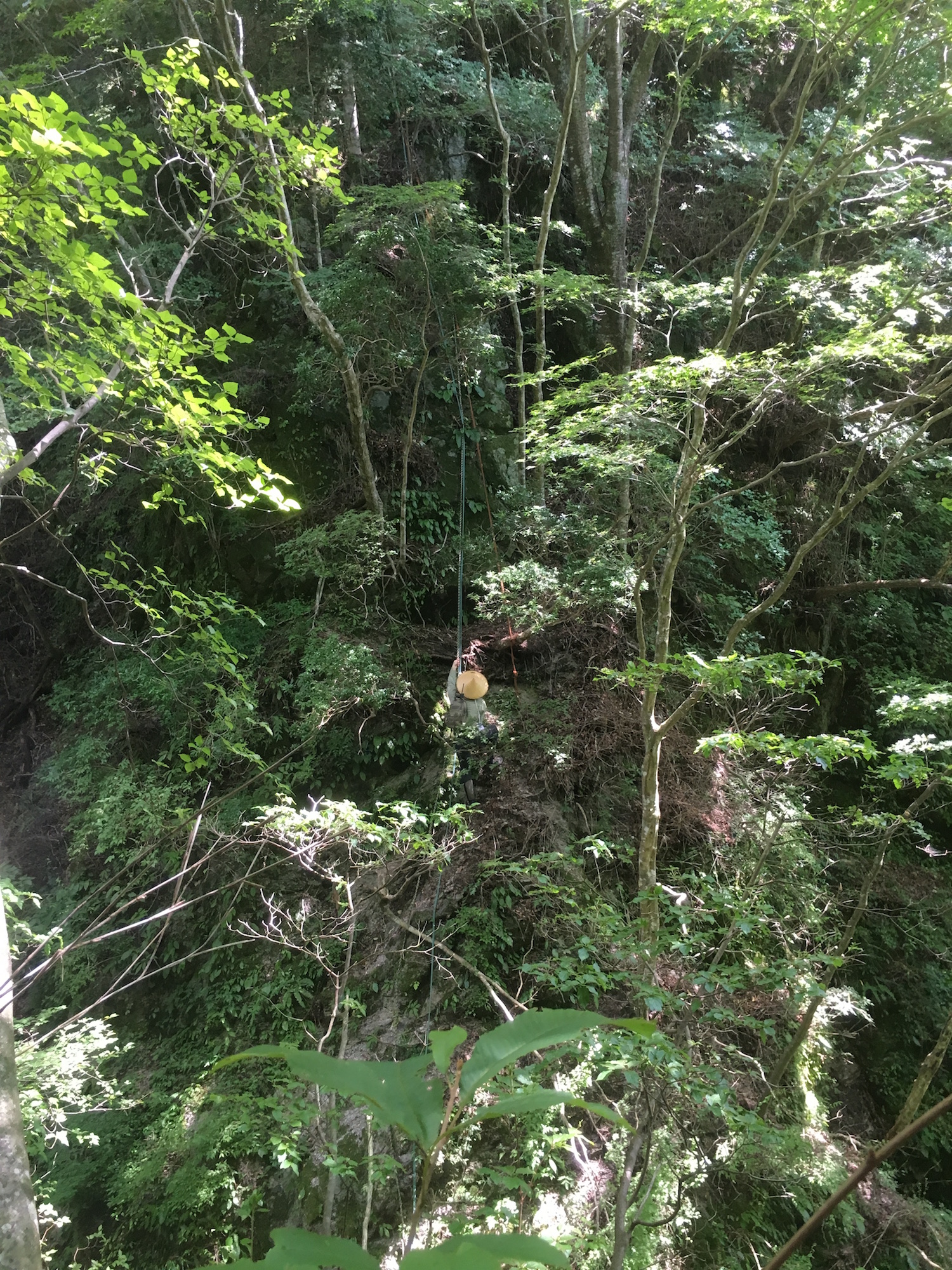 The pucker factor was as high as the vertical hillside covered in a thin vernier of disintegrating sandstone. But after putting in a solid two hour effort to get this far we were not going to be deterred from our goal. Thankfully the ropes looked pretty new and someone had been kind enough to tie a lot of knots in them so the climbing was easy, as long as you did not look down. Safely on the other side - the climb to the top of the last unnamed peak was easy, compared to what we had just surmounted. Unfortunately on the decent we took the wrong ridge line into the river valley. We ended up in a narrow slot canyon above several "too big to safely down climb" waterfalls that required a dicey traverse to bypass. By the time we made it to the river, some three and a half hours after starting we were thoroughly exhausted, but ready to fish. 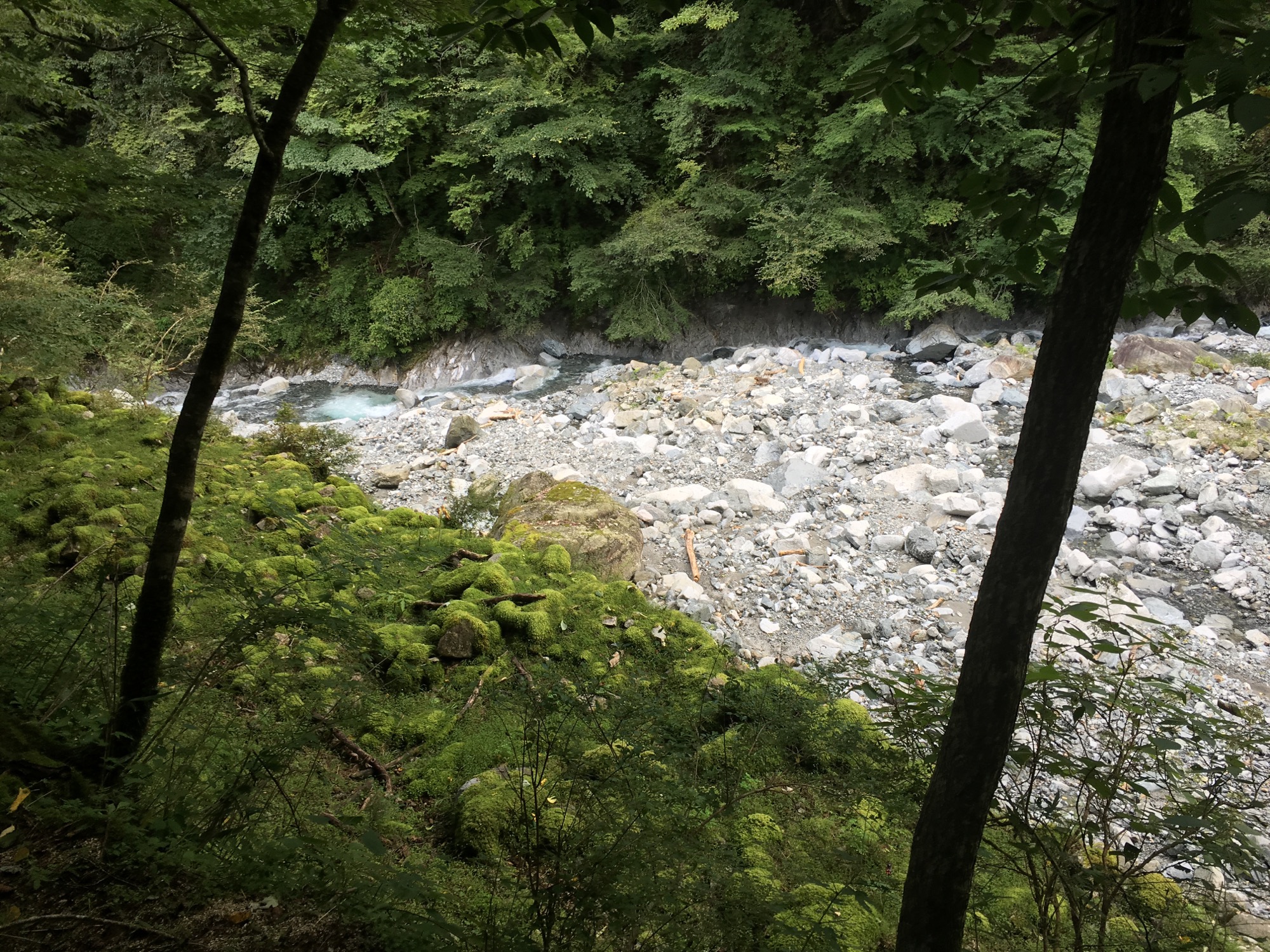 First view of water after an epic hike.

After drinking greedily from the river and eating a few onigiri we pulled out our rods and began fishing the promising pools. The water was still pretty high from Typhoon Lionrock which had swept through a few days prior but thankfully the water was crystal clear. 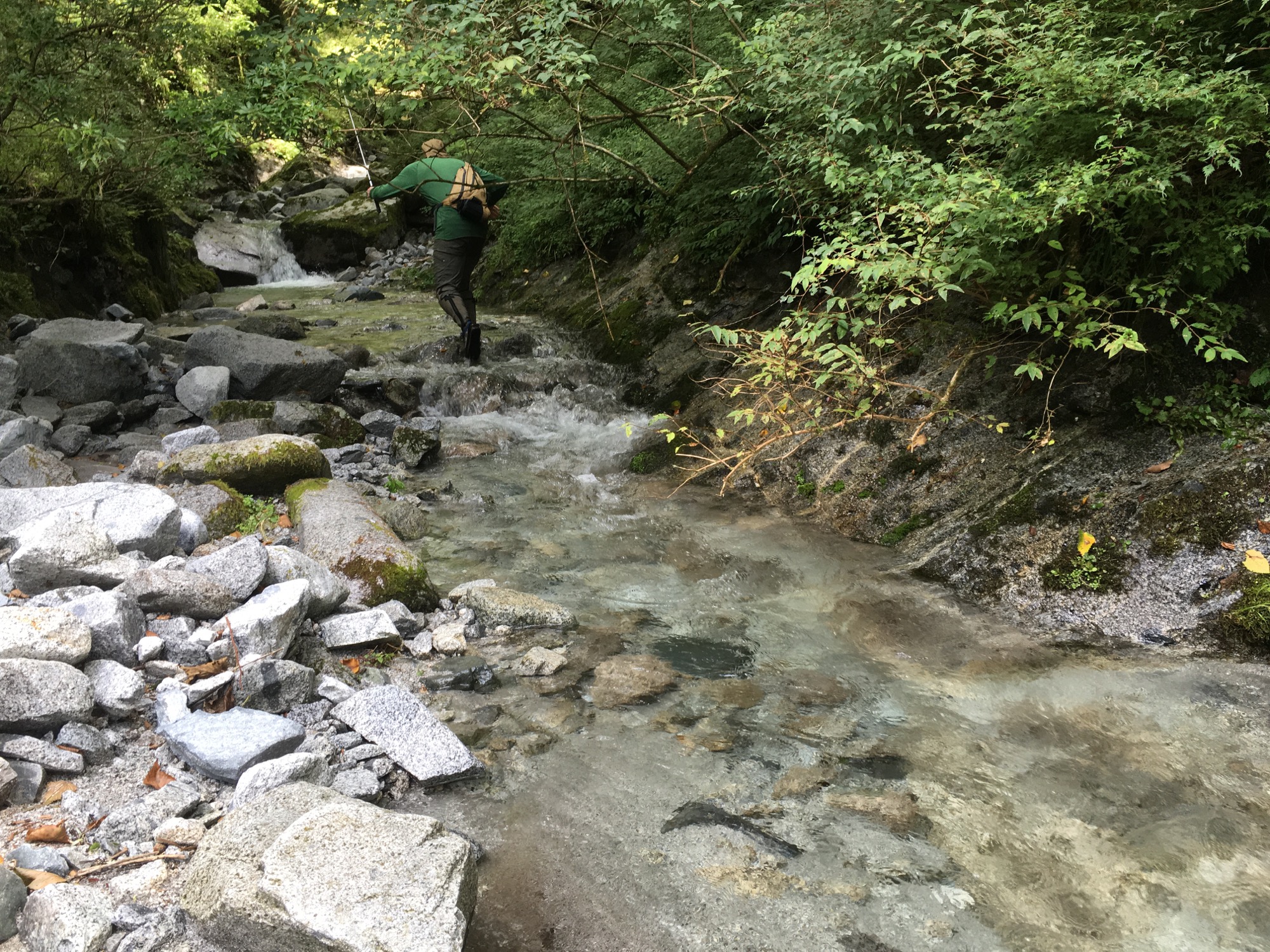 The sun was high in the sky and there was not much cloud cover so I was taking care to move slow and watch my shadows. At a promising pool I was casting half blind behind a large boulder relying on feel alone to detect a strike. My latest rod acquisition, the very supple Nissin Pro-Square Mulch 360 made this easy. I felt a slight tug and set the hook. There was a loud snap and then something hit my sugegasa with a loud thunk. Suddenly my rod felt light in my hand, and then I saw my rod tip floating away downstream. The fish had broken my rod. Dejected I reached down and grabbed my rod tip with the line still attached to the lillian. My sadness turned to elation though because as I brought in the line I realized I still had a fish on! Somehow she had not managed to get off. Perhaps the rod tip floating downstream had kept enough tension on the line to keep the fly in her jaw. Or maybe it was just a blessed day (a hard to deny distinct possibility after surviving the approach unscathed). 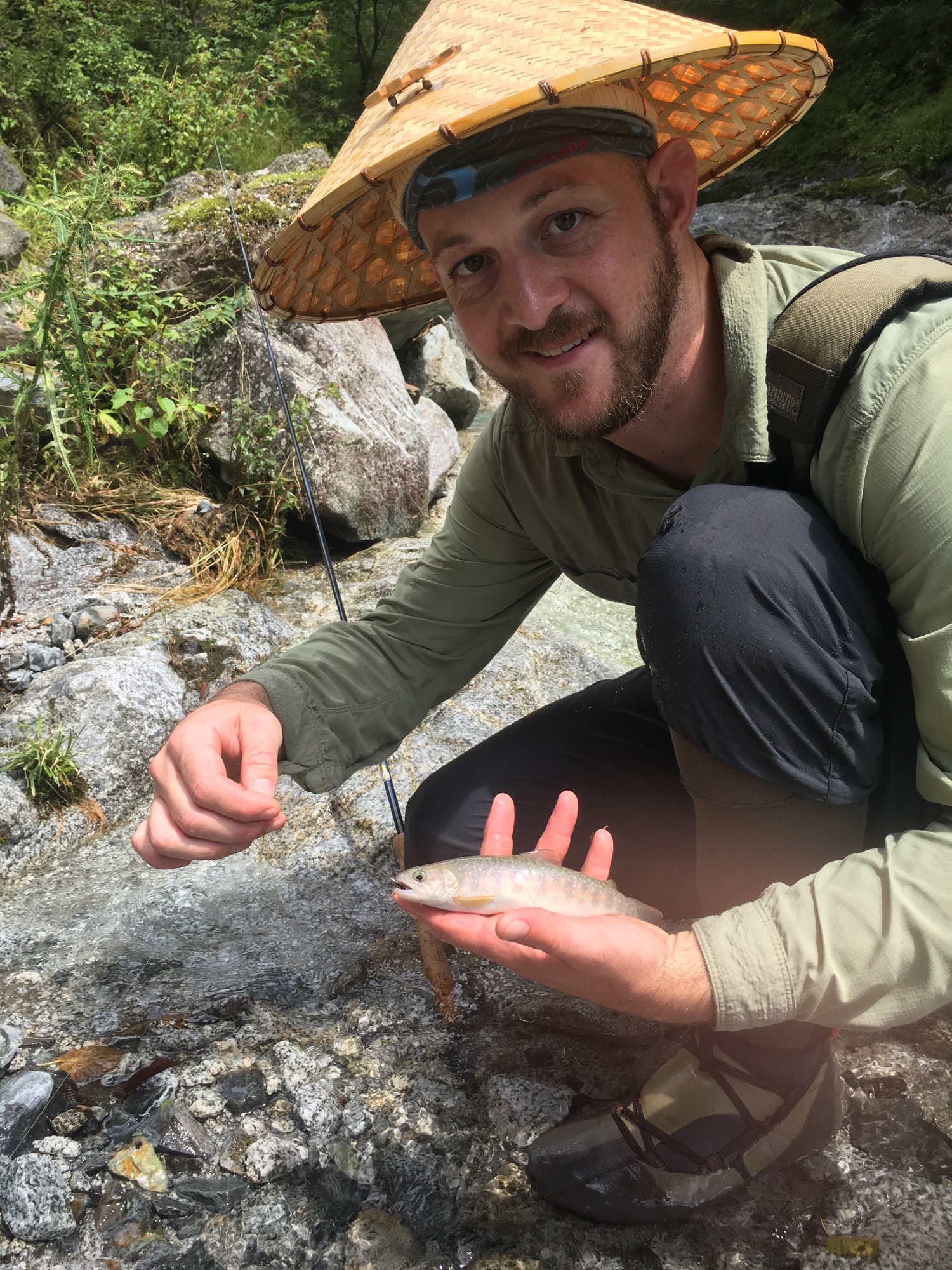 The little beauty that broke my favorite rod.

Thankfully I had packed a second rod, so my day was not shot and we continued fishing - leapfrogging up the valley, each of us taking a turn at every other promising pool.

The river was absolutely beautiful and it was not long before we came across the Garden of Eden of pools, which just so happened to be my friends pool to fish. 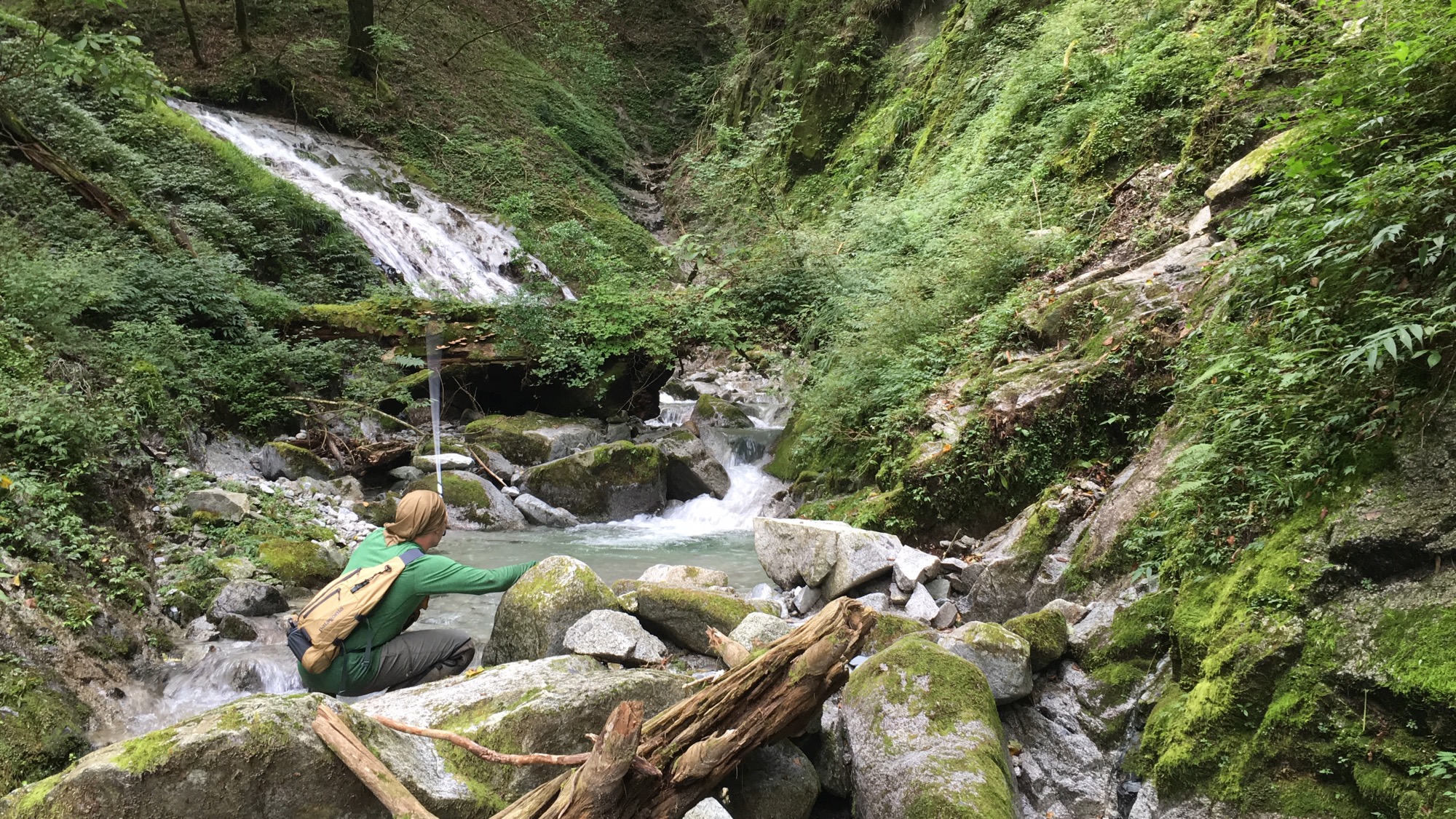 Where he hooked one of the biggest Iwana I had ever seen! 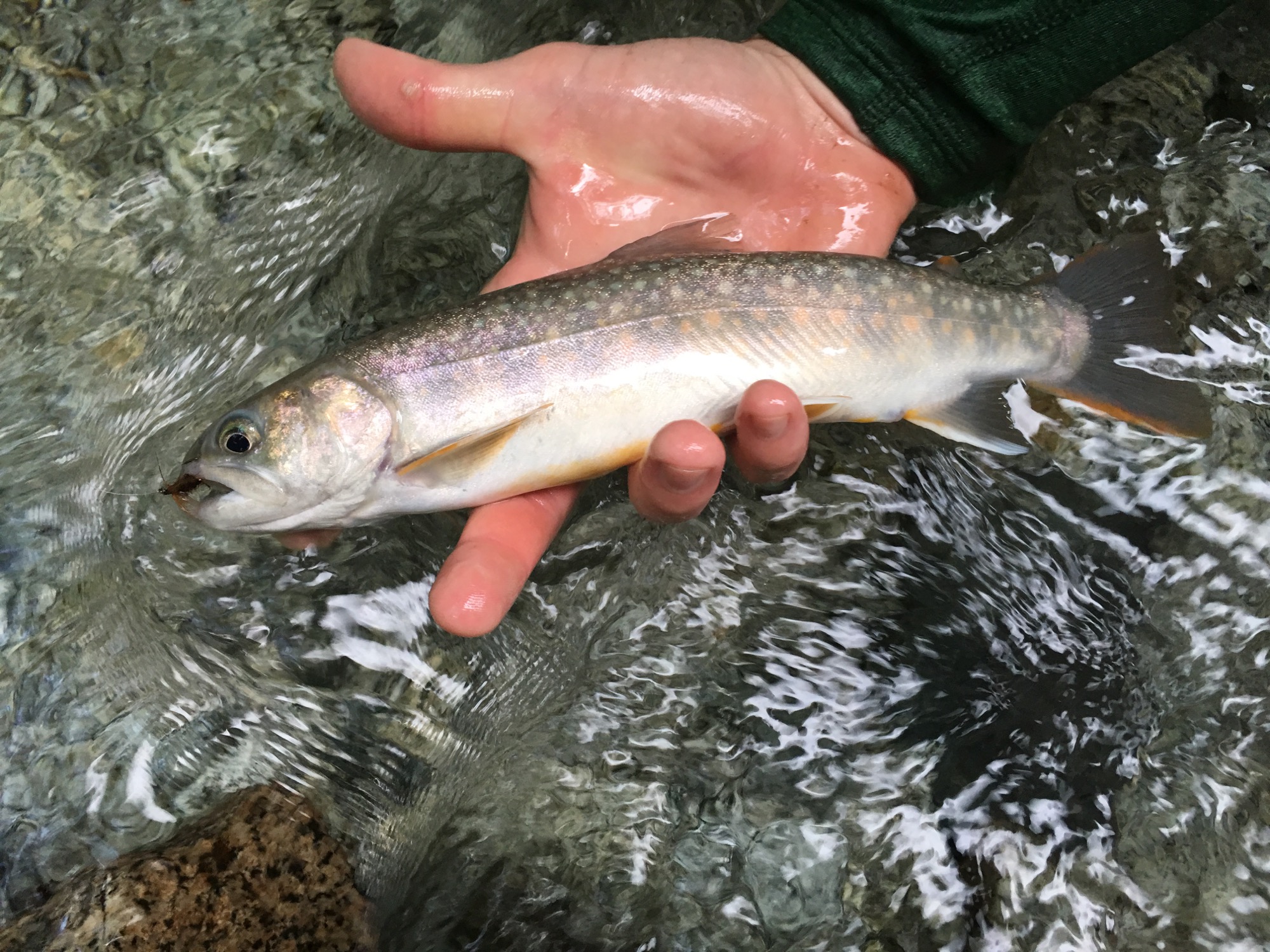 And then we released him...

Good bye little buddy - make sure you spawn a lot this fall.

The approach had taken longer than we had suspected. So unfortunately we only had about 4 hours to fish before it was time to begin our egress with enough daylight to make it safely back to the car.

As if by a miracle, my buddy stumbled across a much more straightforward route back to the car. This alternate route option gave us both a sigh of relief as we were not looking forward to reversing the slog we had undertaken to get there. Once was enough. On the hike back the オオルリ(Oruri) were silent, instead of their pleasant songs we were serenaded by the eerie wines from a herd of deer. 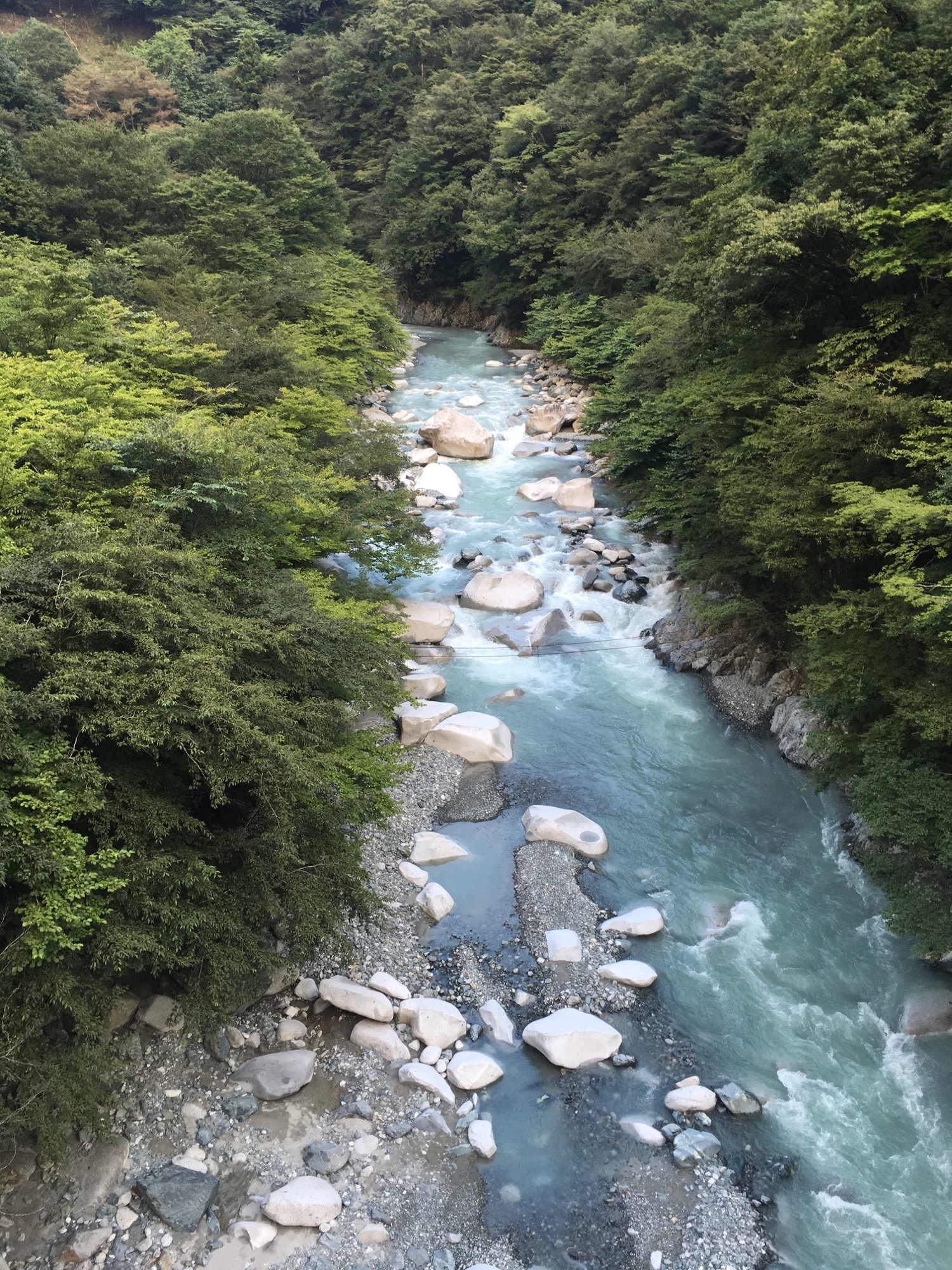 We got back to the car just in time to catch a spectacular sunset. 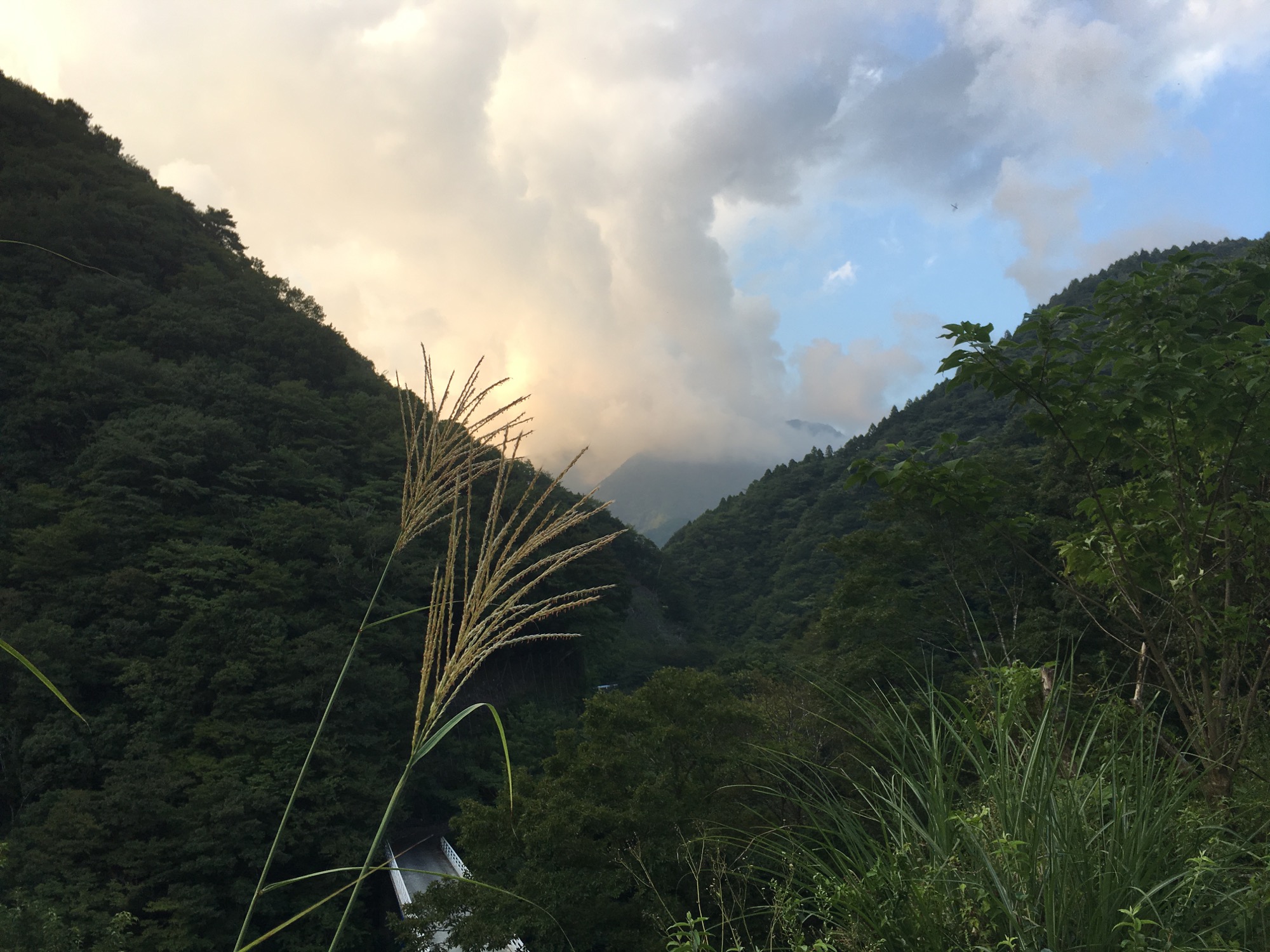