Back in July my friend Junpei asked me if I wanted to go to a Japanese music festival on Hachijojima, a tiny island off the coast of Japan. The music festival called Liquid Groove Drop, was a mix of Indian music, techno, and electronic dance music. The venue was the Yokotoike Ura Beach (横問ヶ浦) on the west side of the island. I was intrigued and after doing some research on the island I emphatically said "YES!" 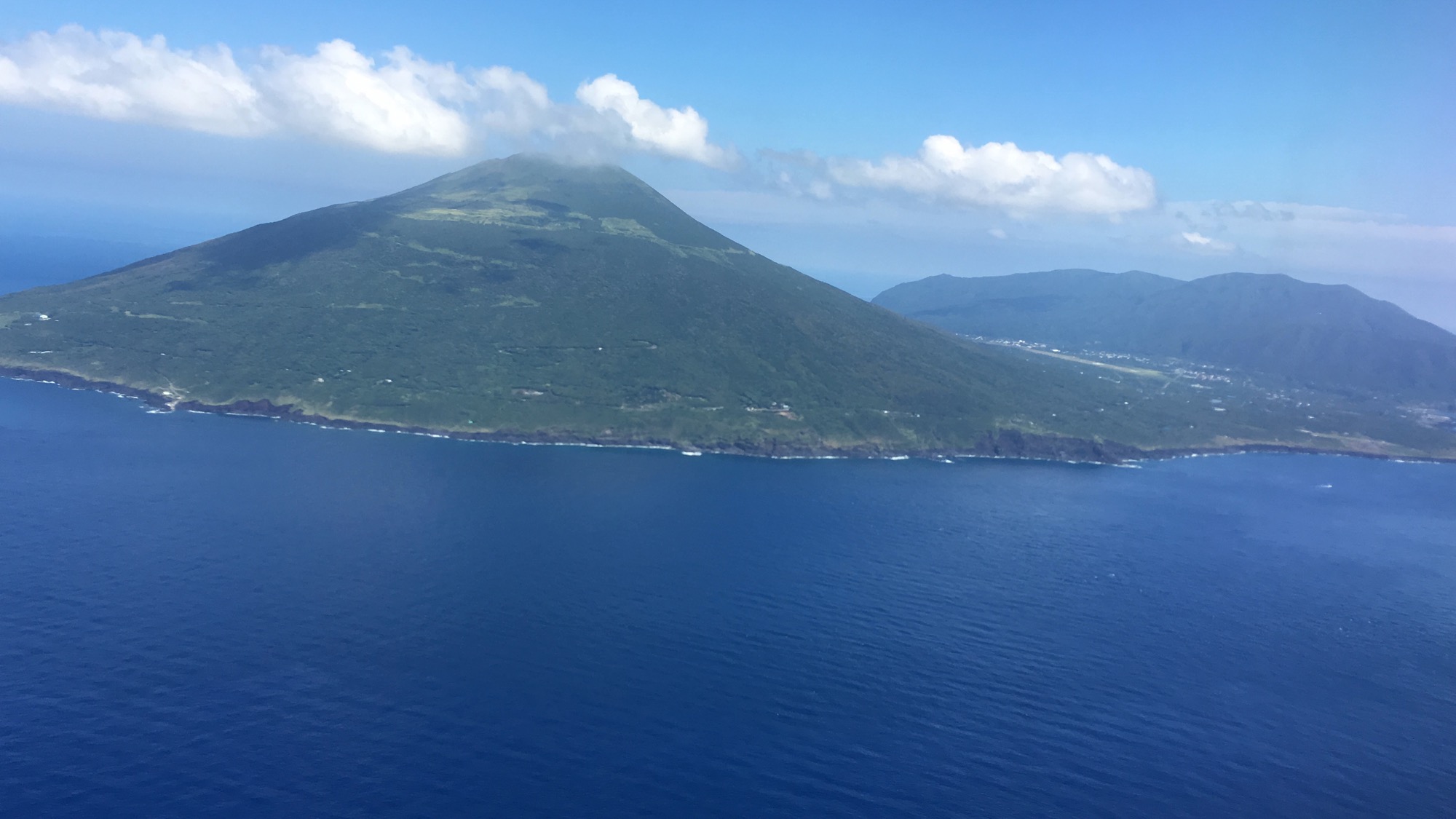 ❄︎ Hachijojima (八丈島) is one of thirteen Izu Islands that are located in the Philippine Sea off the east coast of Japan.

❄︎ Nine of these islands are populated, Hachijojima being one of the largest and the only one with an airport that offers regular flights.

❄︎ Hachijojima is a popular destination for scuba divers and snorkelers as the Kuroshio Current keeps the water very warm. 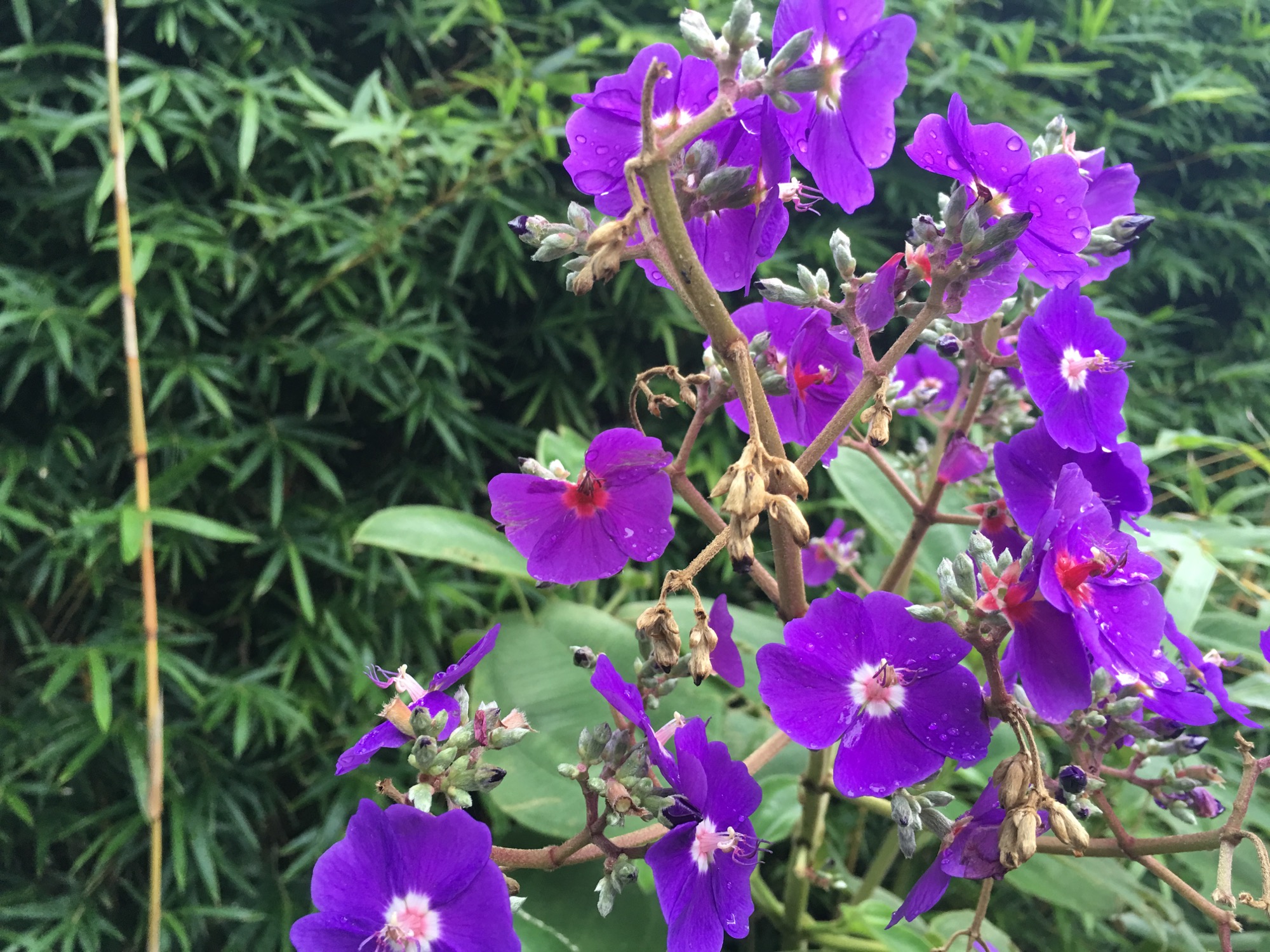 ❄︎ With nearly 60km of coastline, much of it inaccessible due to huge sea cliffs, and two large volcanos on each end of the island - the area is rife with natural beauty.

You can get to the island either via ANA which has three flights a day from Haneda Airport or via an overnight ferry. The ferry departs at 10:30pm from Tokyo and arrives at 8:50am the next day. Our friend chose the ferry while my wife and I splurged and got a plane ticket. While the island has a lot of options for lodging we chose the free camping option. At first we were planning on camping at the only campground on the island, but due to the event staff using the campground as living quarters the city opened up Plaza Park (八丈プラザ公園) for us to camp at. The park had a bathroom and a covered BBQ area with sinks which was nice. 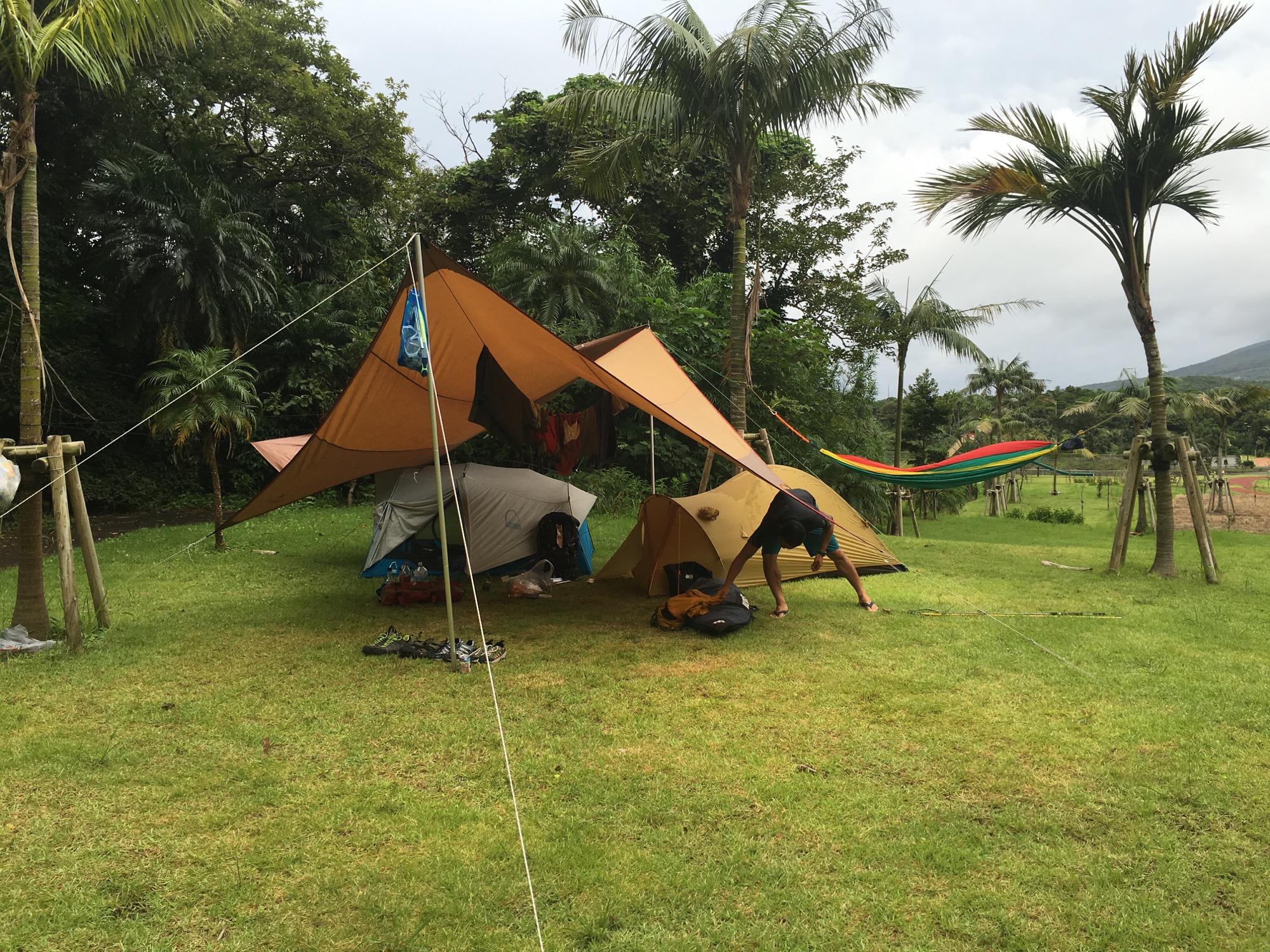 Typically you are not allowed to camp at the park but for the event the city made an exception. The free campground is located right next to Sokotsuchi Beach (底土海水浴場) which is an excellent place to snorkel - something that we did every day we were there. 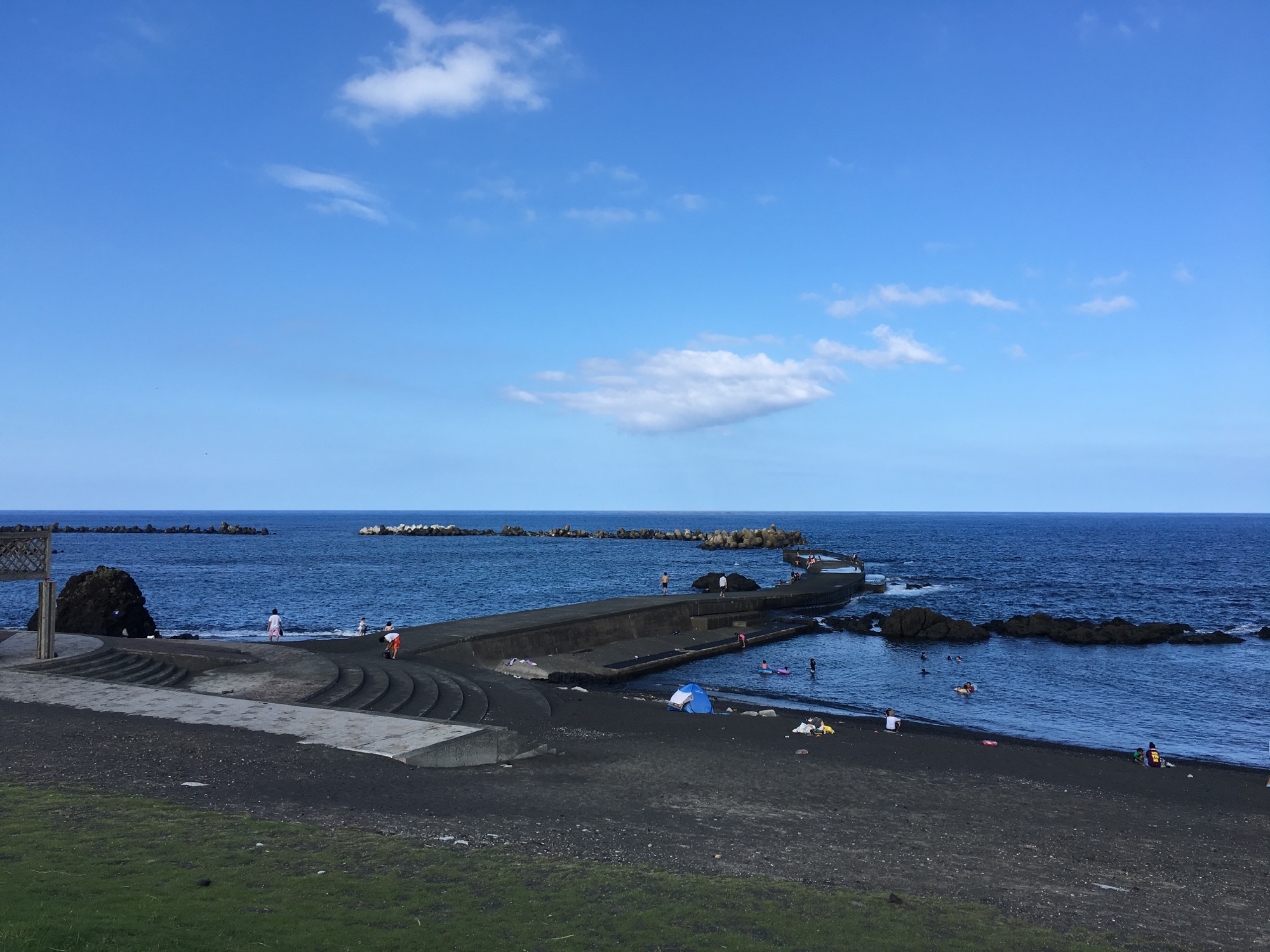 The snorkeling is amazing on this island, the water is warm and we saw all manner of sea creatures swimming about in the coral reefs. I even got to pet a sea turtle that swam right up to me! My friend brought his spear and we tried to get a Yellowfin Tuna or two that we saw swimming about in huge schools, but they were too fast. I would have posted a lot of photos of the underwater paradise but our waterproof Nikon camera turned out to not be that waterproof. 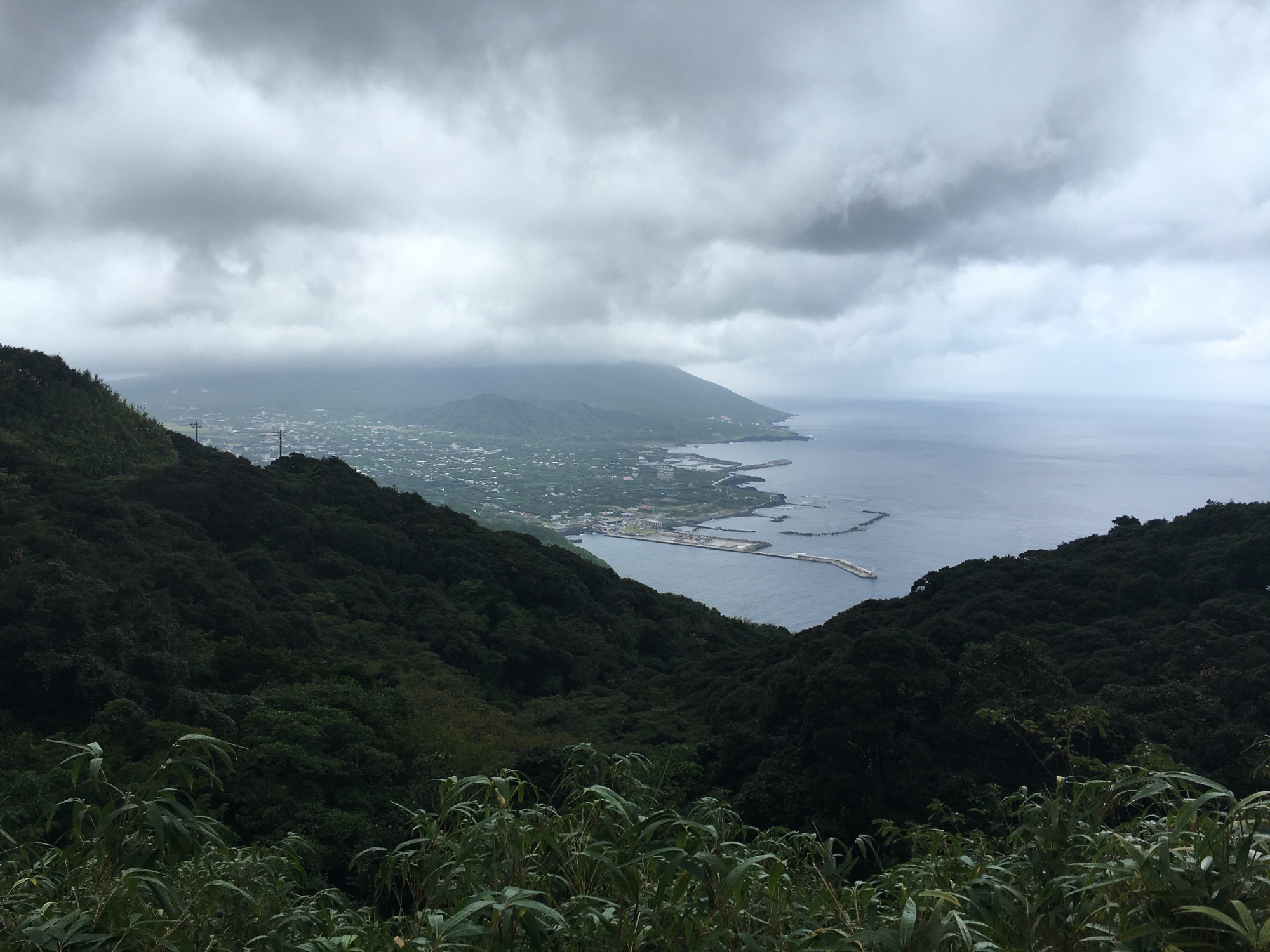 The next day we visited Uramigataki Onsen (湯裏見ヶ滝温泉) which is located at the confluence of the Miharakawa (三原川) and the Yasukawa (安川) PDF (home page link). The Yasukawa flows from a nice looking lake. Perhaps it has fish in it? I am not sure because I did not bring the right equipment for fresh water fishing (aka my Tenkara rod) as I did not think there were any rivers on the island besides a few seasonal drainages... I was wrong. 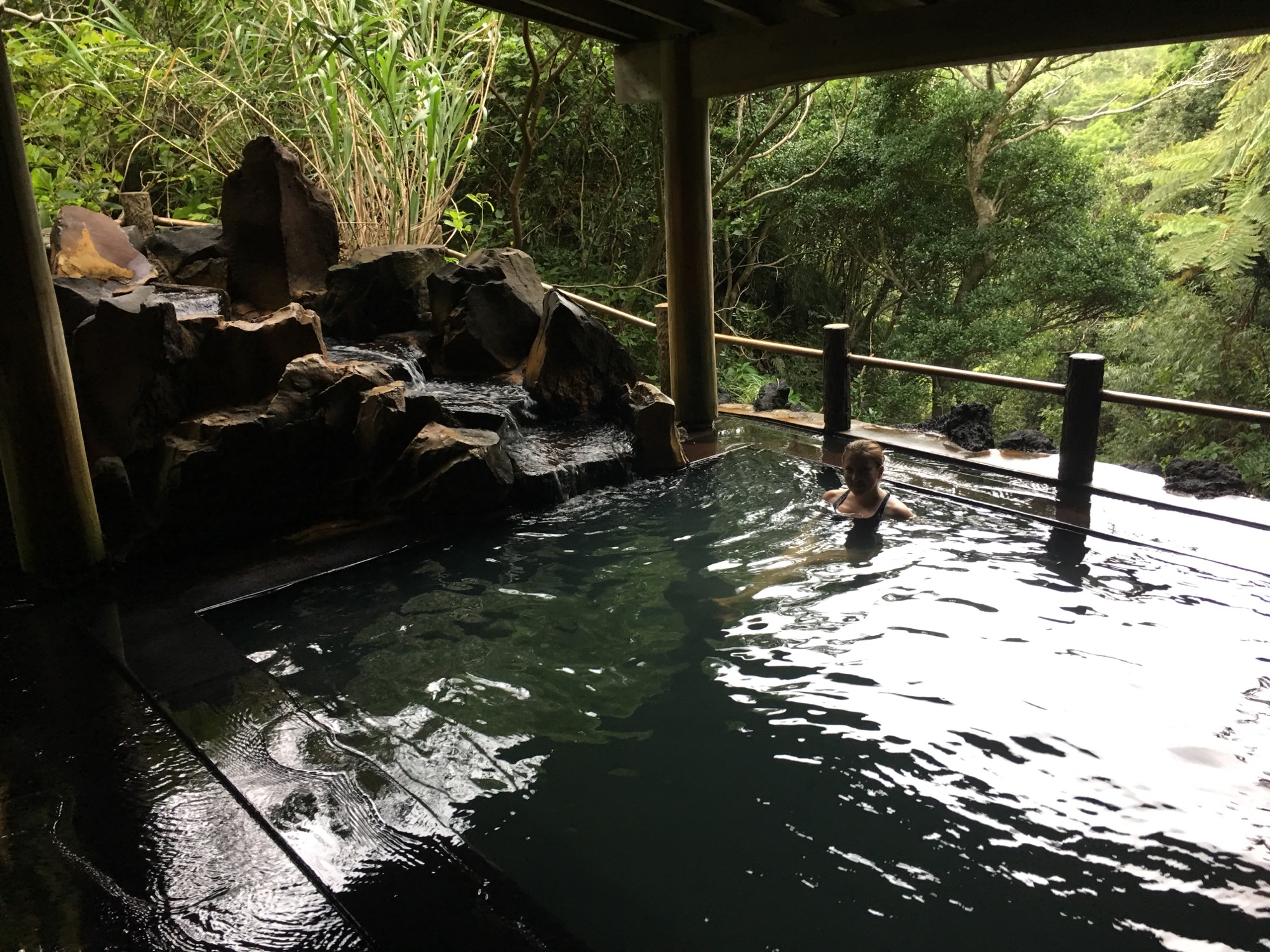 The onsen is male and female - bathing suits mandatory. It sits between two waterfalls and a third one below the onsen.

To get around the island we rented bicycles for ¥1500 a day per person. One day we rented a car that cost ¥3000 per day and ¥1000 extra for optional insurance. The rental office is located in the Mobil Gas Station. They also rent scooters and go carts. The later is ¥1000 per hour - I am not sure how much scooters cost to rent (also note the go carts do not come with a helmet...). The attendant spoke good English and they were all quite friendly. 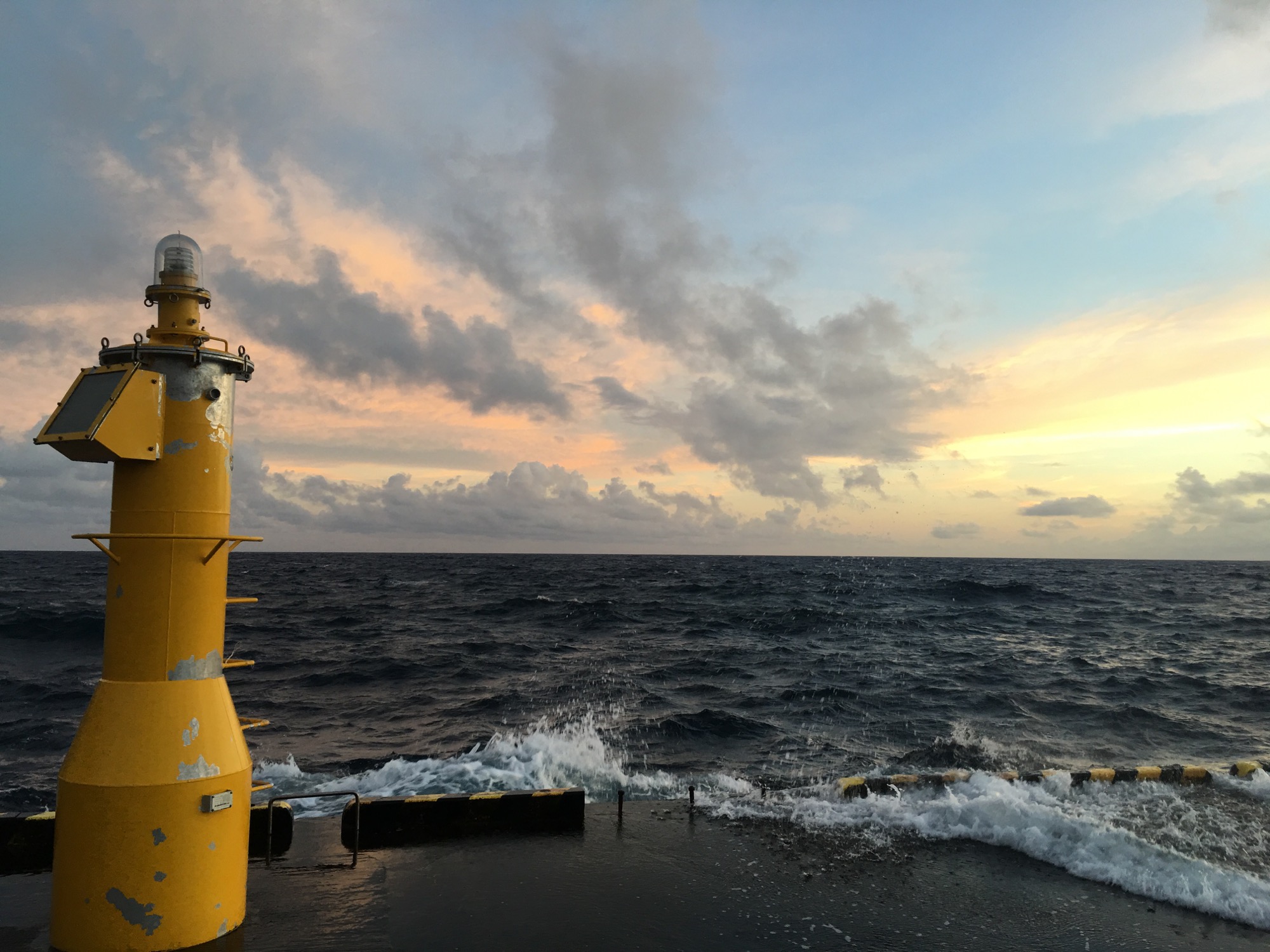 As far as dining options on the island we BBQ'd several dinners at our campsite but we did have lunch at Isozakain (いそざきえん) which was absolutely amazing and quite cheap at ¥1600 per person (they do have several options - the most expensive is ¥5500 per person). Also the Yakinuku Restaurant (名月苑) served delicious ramen and gyoza as well as an extensive menu of Chinese food (they are located across the street from the big police station on 216). There are so many restaurants on the island that you would probably need to stay for a week plus to try them all. 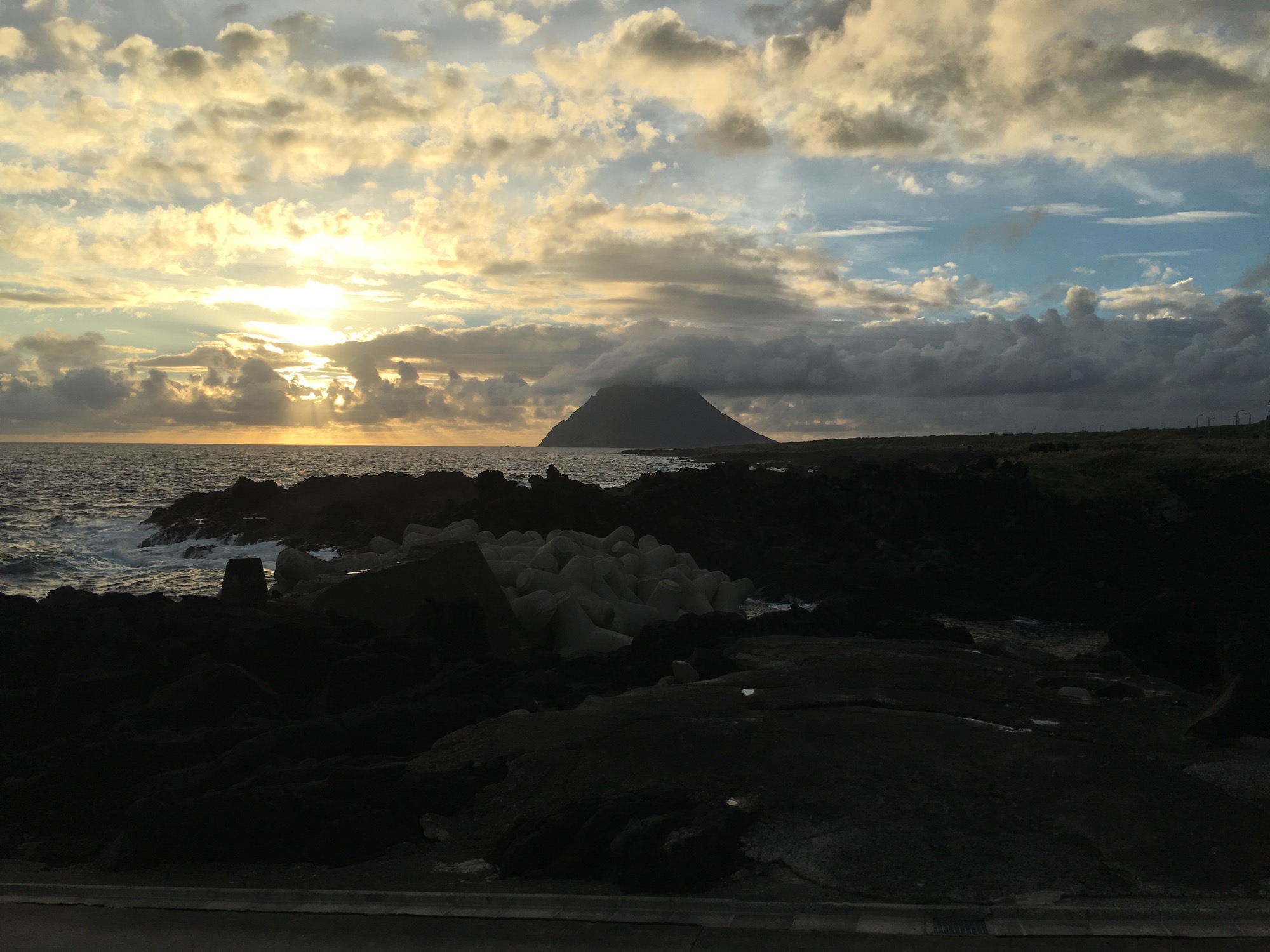 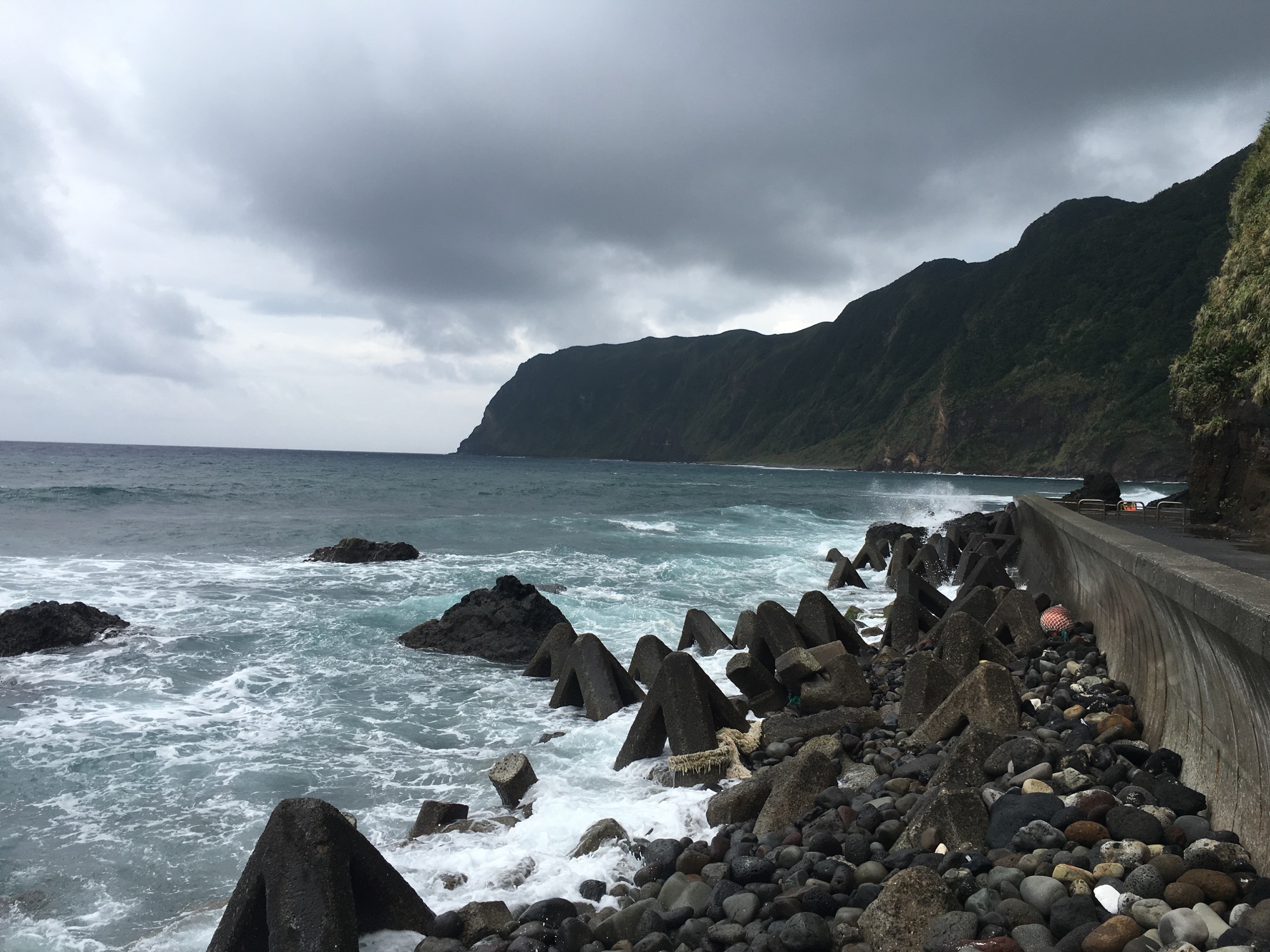 Of course I would be remiss to not mention the music festival, one of the main reasons why we came. The first night there was a torrential downpour (that flooded our tent) and so we opted not to ride our bikes the 2km in the dark to the festival. The second night the weather was great. The half moon was radiating on the ocean and the sky was filled with stars while silver cotton ball clouds drifted through the black night sky. 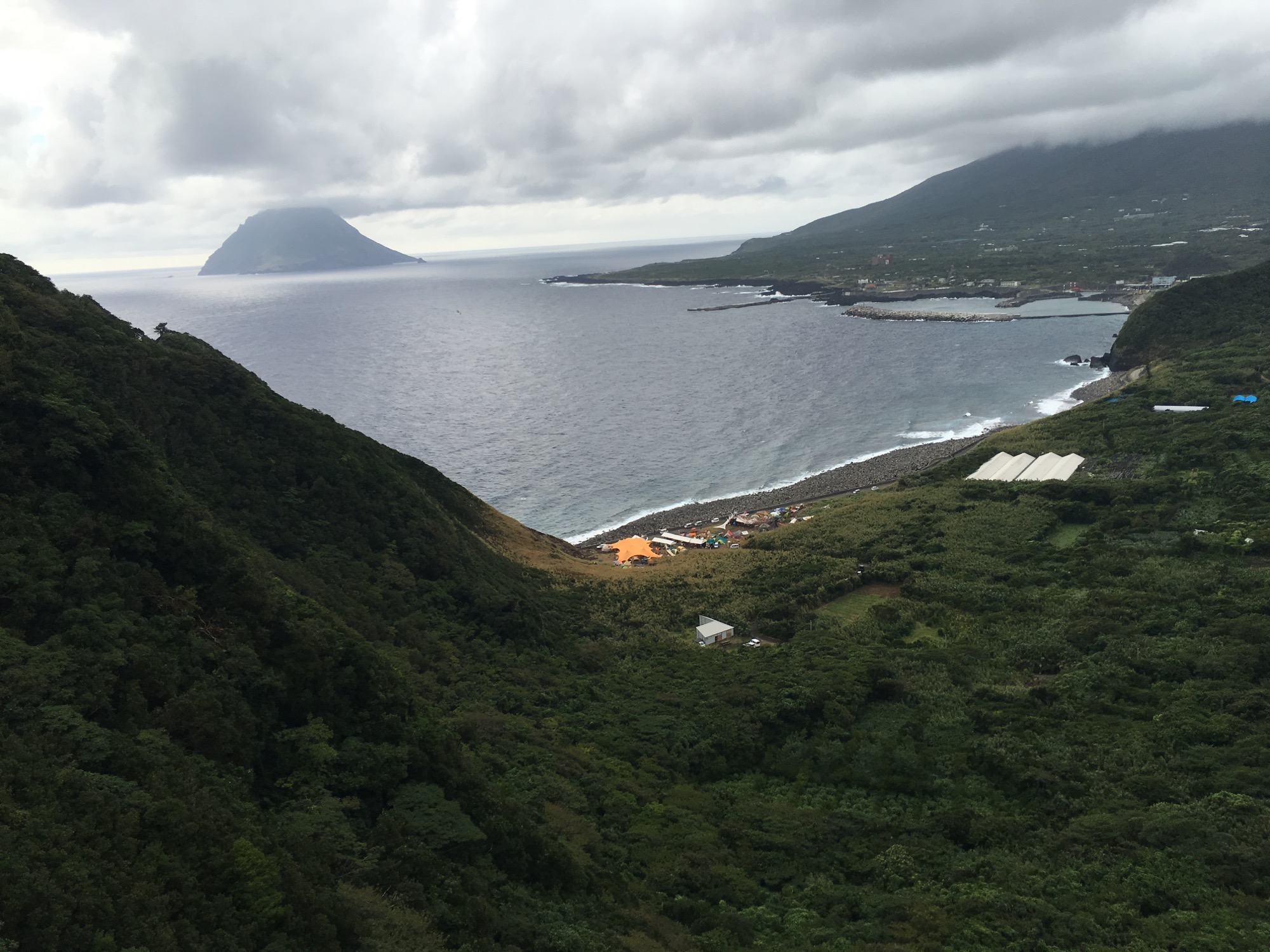 The venue as seen from the "highway". 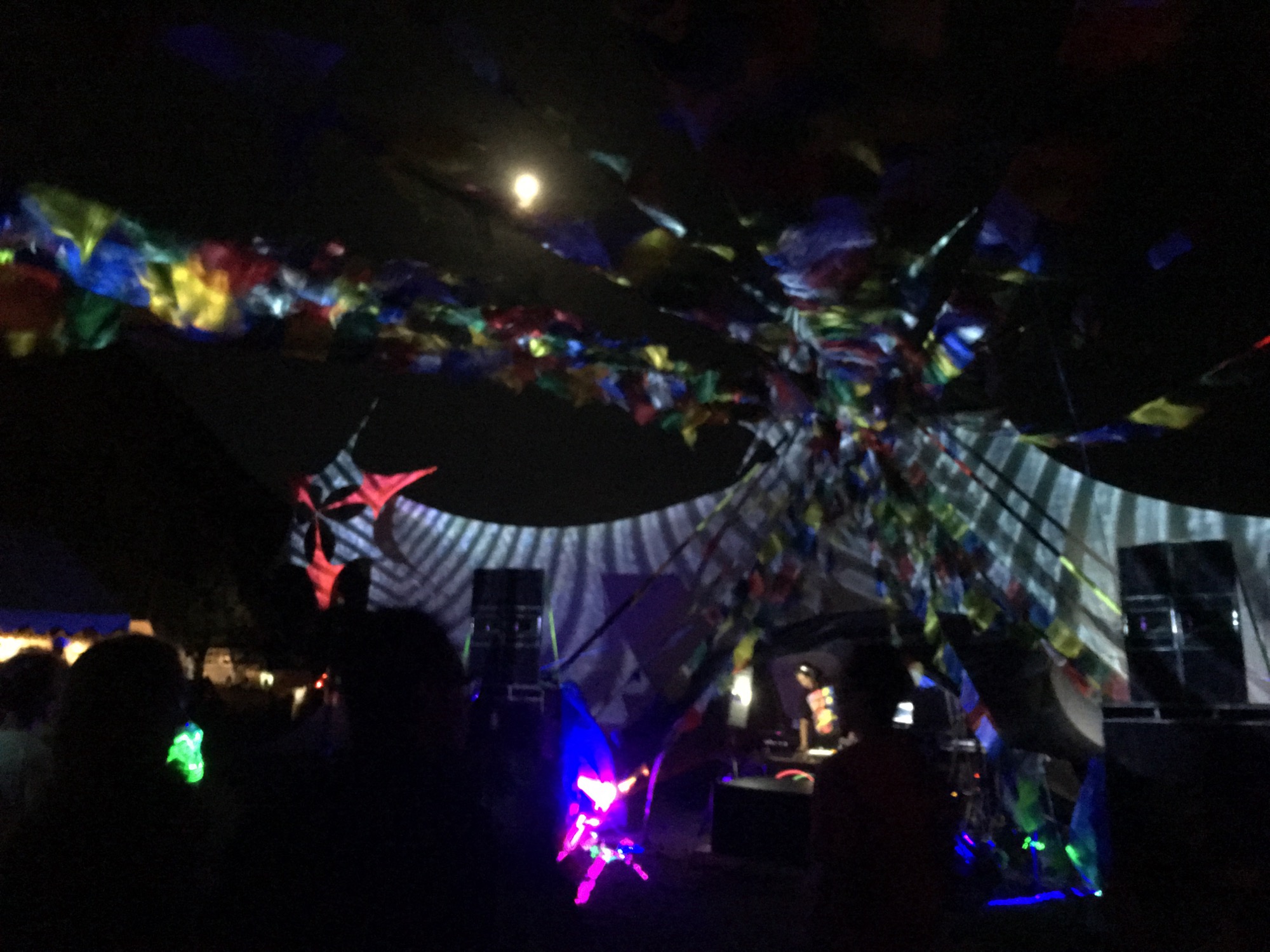 We stayed out pretty late but not too late because we had an early morning the next day. We were headed to the even smaller island called Aogoshima! 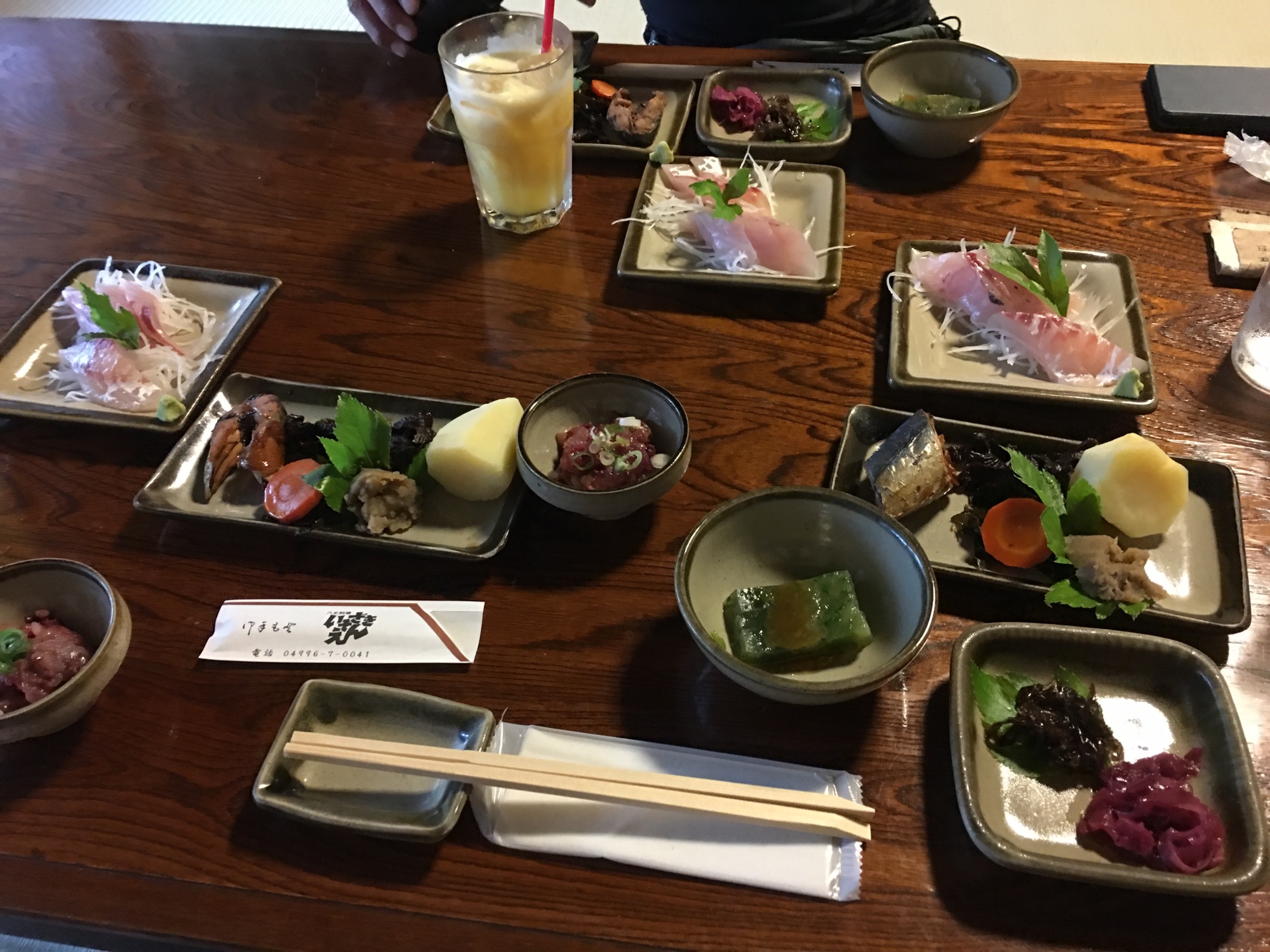