Before I moved to Japan my wife's Grandma emailed me an article about a tiny island, way out in the ocean off the coast of Japan. She sent it to me with a quick note "You should visit this island sometime - Love, Grandma". After reading up on the island and how remote it is and difficult to access I was sold on visiting. Well it just so happens that the only way to get to the island is by ferry or helicopter, both of which depart from Hachijojima. Since we were already going to be there for the music festival we made plans to tack on a visit to this island, which is known as Aogashima, to our trip. 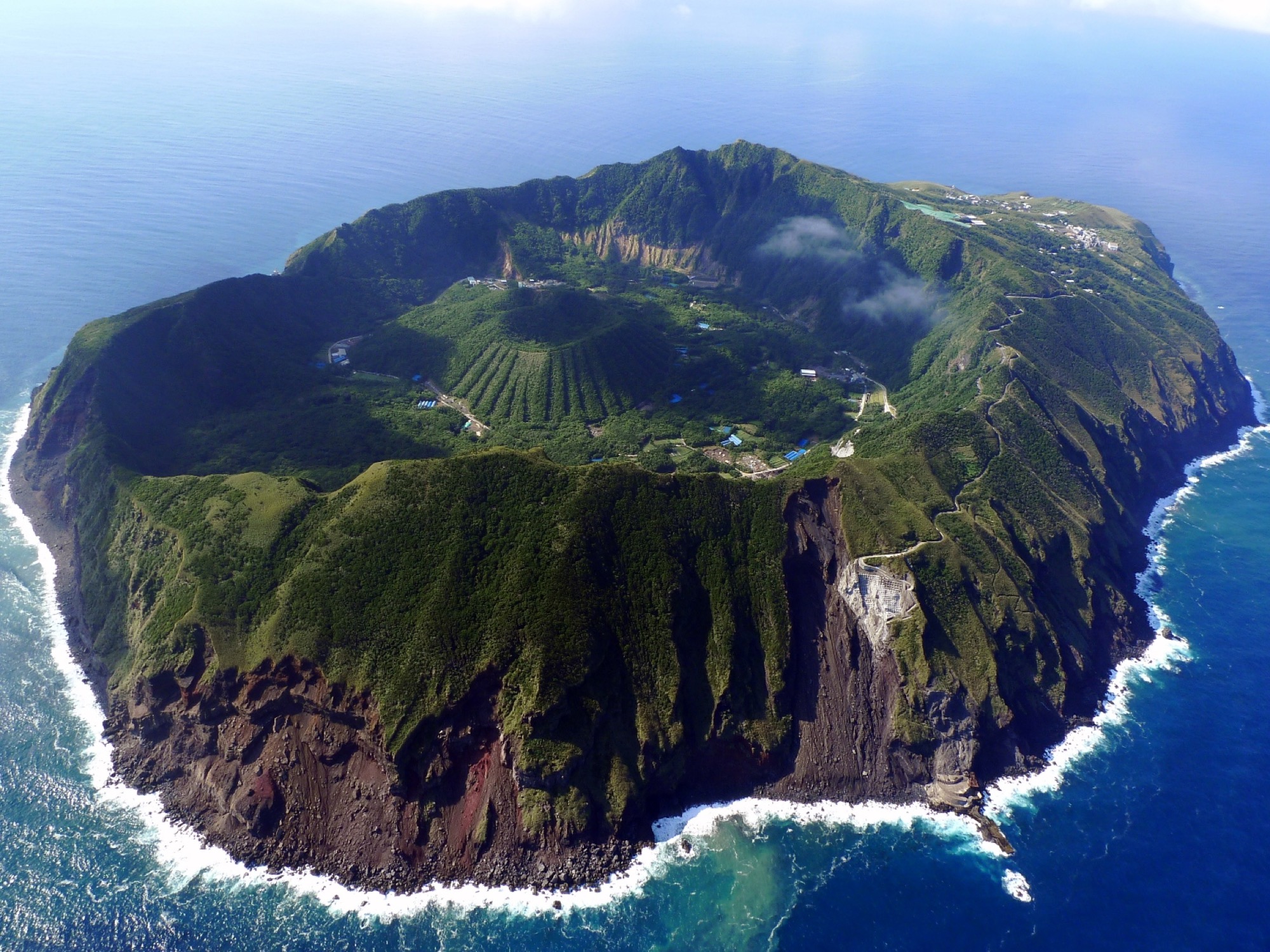 Unfortunately, the helicopter service to the island has limited seats available and you can only book flights starting at noon 30 days prior to your trip. I logged on at 3pm and they were already sold out! So we were stuck with the ferry. The helicopter ride costs ¥18,000+ per person round trip and the ferry costs ¥5,500 per person round trip. While the ferry is obviously much cheaper, it is also very unreliable. The island has no natural harbor so if the seas are too rough the ferry is cancelled for the day. You can call (+81-4996-9-0033) the ferry at 0700 the day of your intended trip to find out if they are operating. If they are, there is one ferry that departs at 0930 and arrives at the island around three hours later. 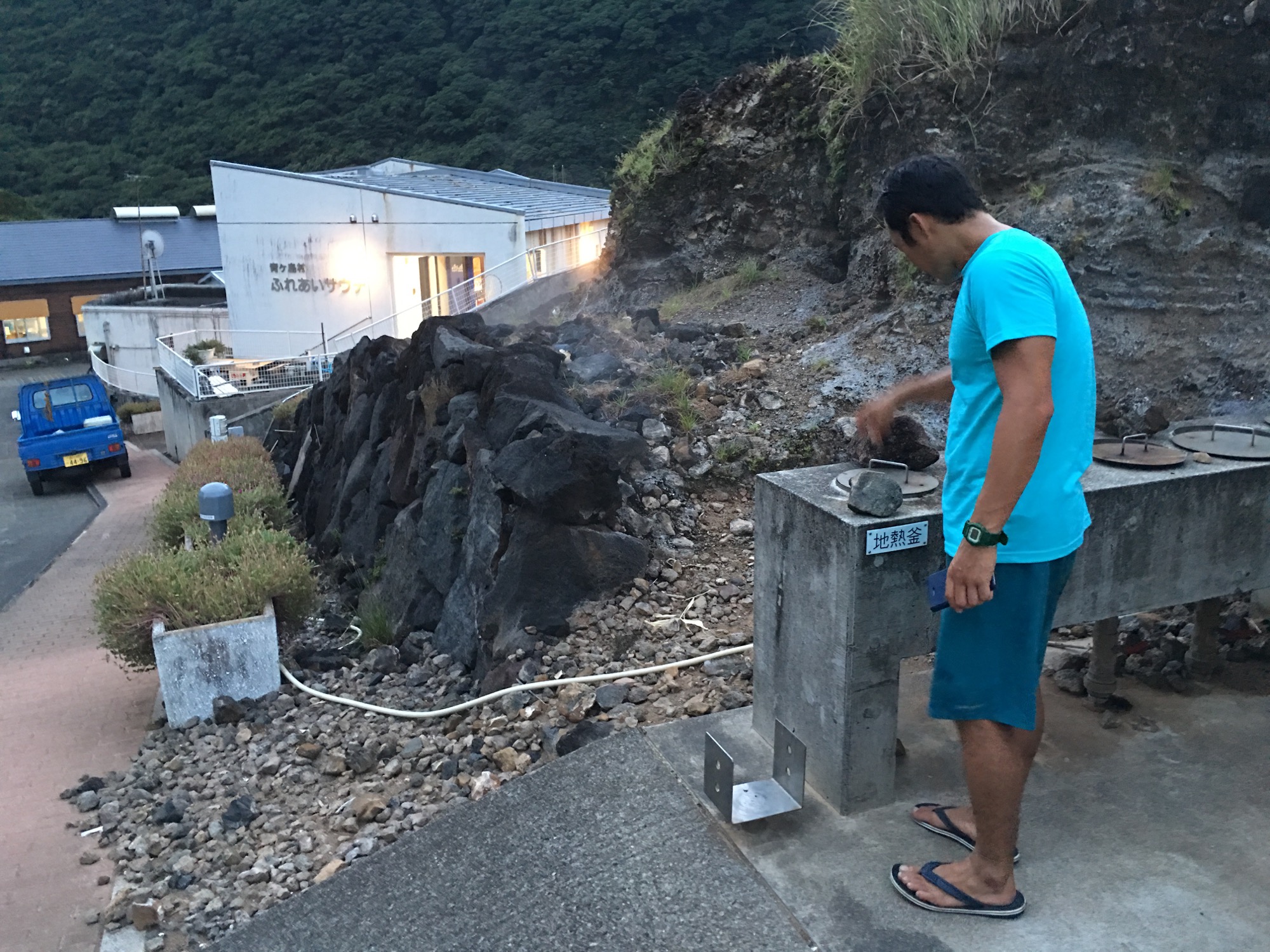 Our good freind Junpei cooking dinner in a volcano steam vent with the onsen in the background...

We called the ferry at 0700 and luckily for us they were running. It was a mad scramble to tear down our campsite on Hachijojima and return our rental car and bikes. It was a hectic morning but we boarded the ferry with five minutes to spare. Once we left the island the skies cleared and the sun came out. The seas were still pretty rough but thankfully the Aogashima Maru (our ferry) was quite stable and we never got seasick. When Aogashima came into view, some three hours later, we were absolutely blown away by how blue the water was, how green the island was, and how rugged and austere it all looked. 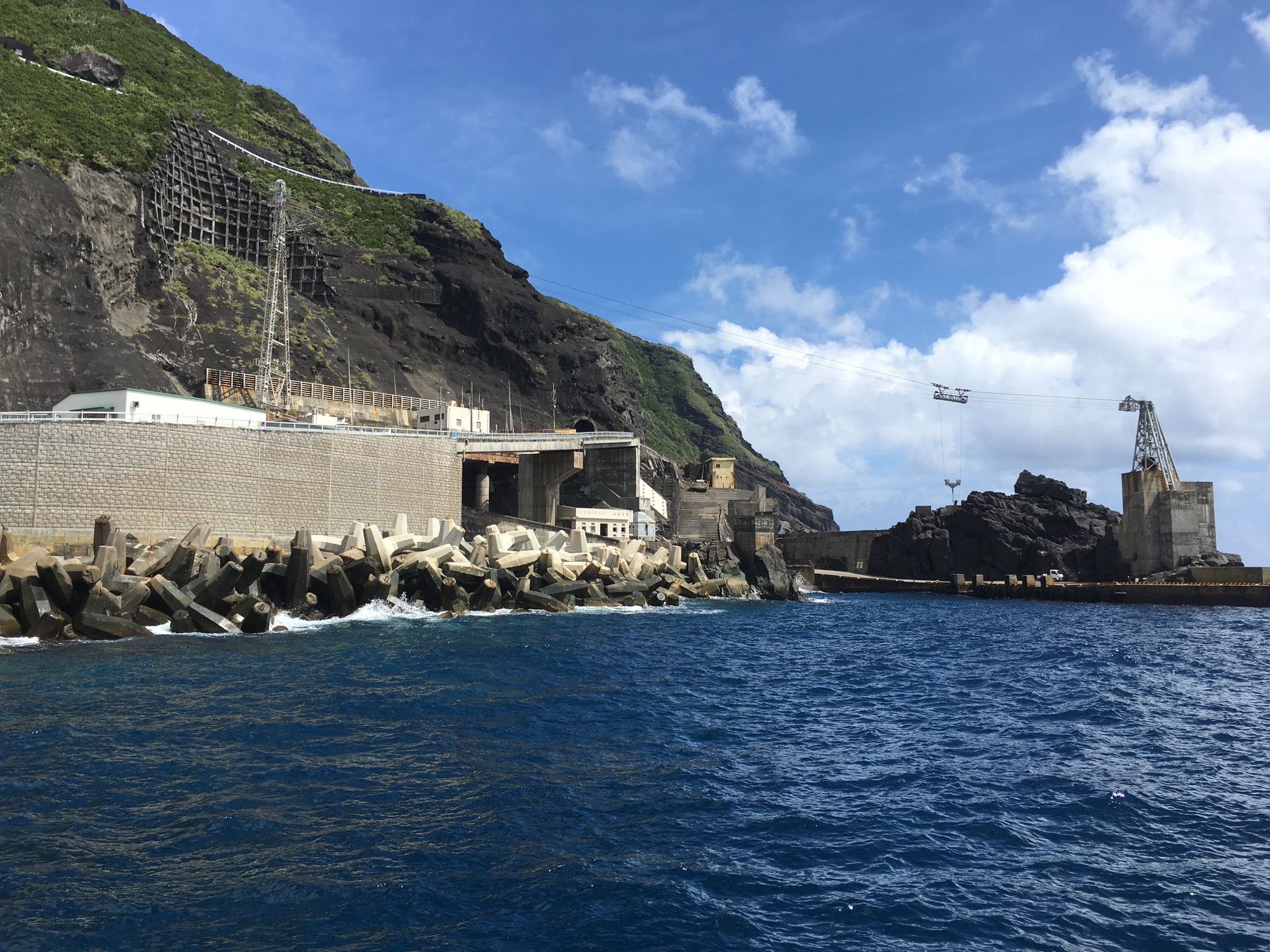 There is no natural port and the seas are so rough that they've built a crane to pluck the fishing boats from the ocean and put them on a platform on the side of a cliff.

Upon landing safely on Aogashima we were met by a city employee who told us that we needed to register at the city office by 5pm. We were also told that there were two rental car companies on the island but only one rented to campers. A city employee, who also apparently owned the rental car company, gave us a ride to the rental shop, where we transferred our luggage into our rental kei van, and then we followed the city employee to the city office to register. At the city office we also picked out our campsite (we chose #8 & #9). After registering we made our way to the grocery store but on the way our car broke down and would not start again. So we called the lady up and she quickly returned and gave us a ride back to the rental car shop where we got another car (the cost is ¥5,500 per day including gas and insurance). 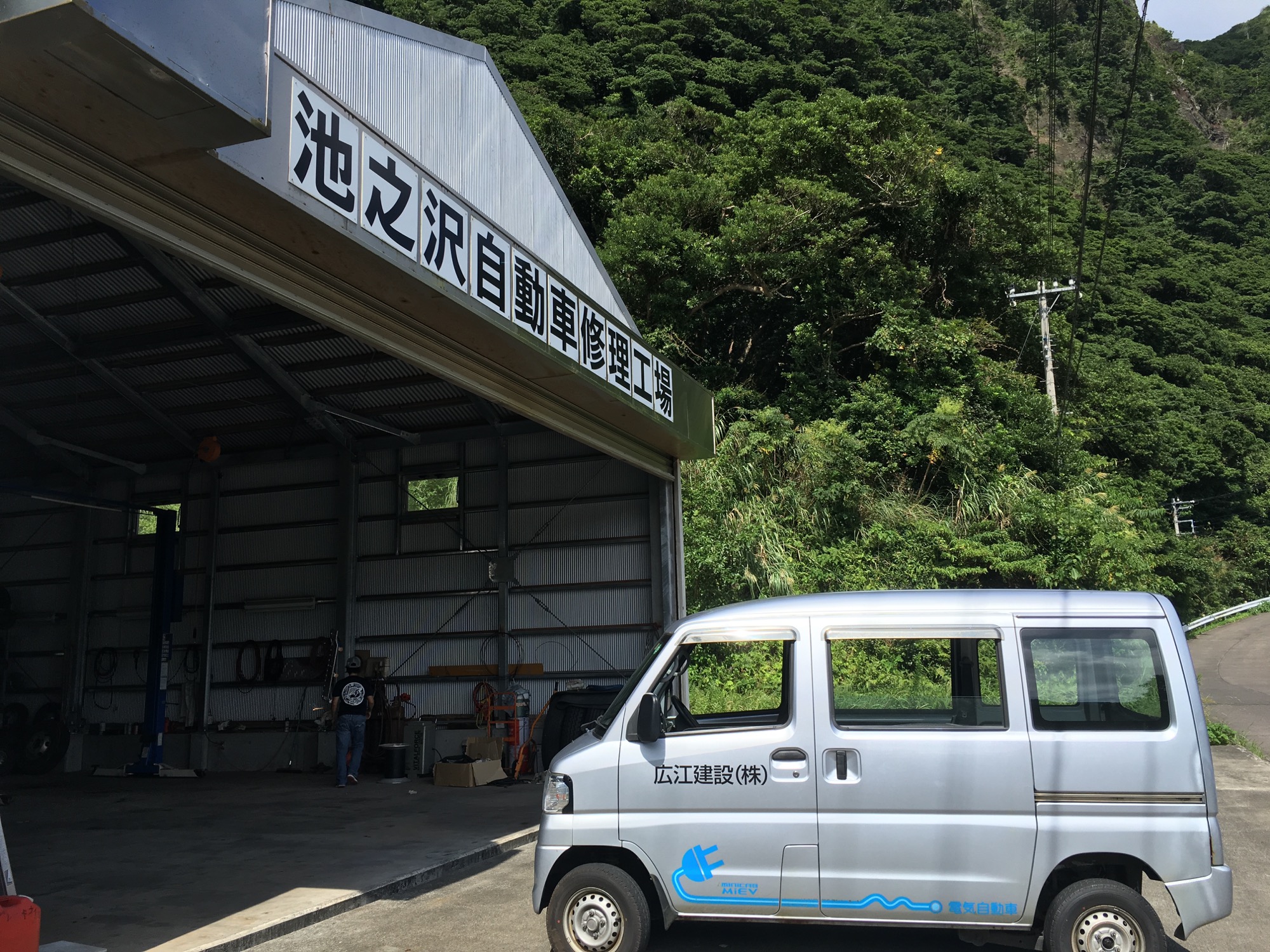 The rental car place (the electric Kei van is the owners).

After dealing with the car debacle we returned to the grocery store and bought dinner (there are no restaurants on the island. However, there are two Izakayas - one of which is only open on Wednesday). Then we drove to our campsite and set up camp. 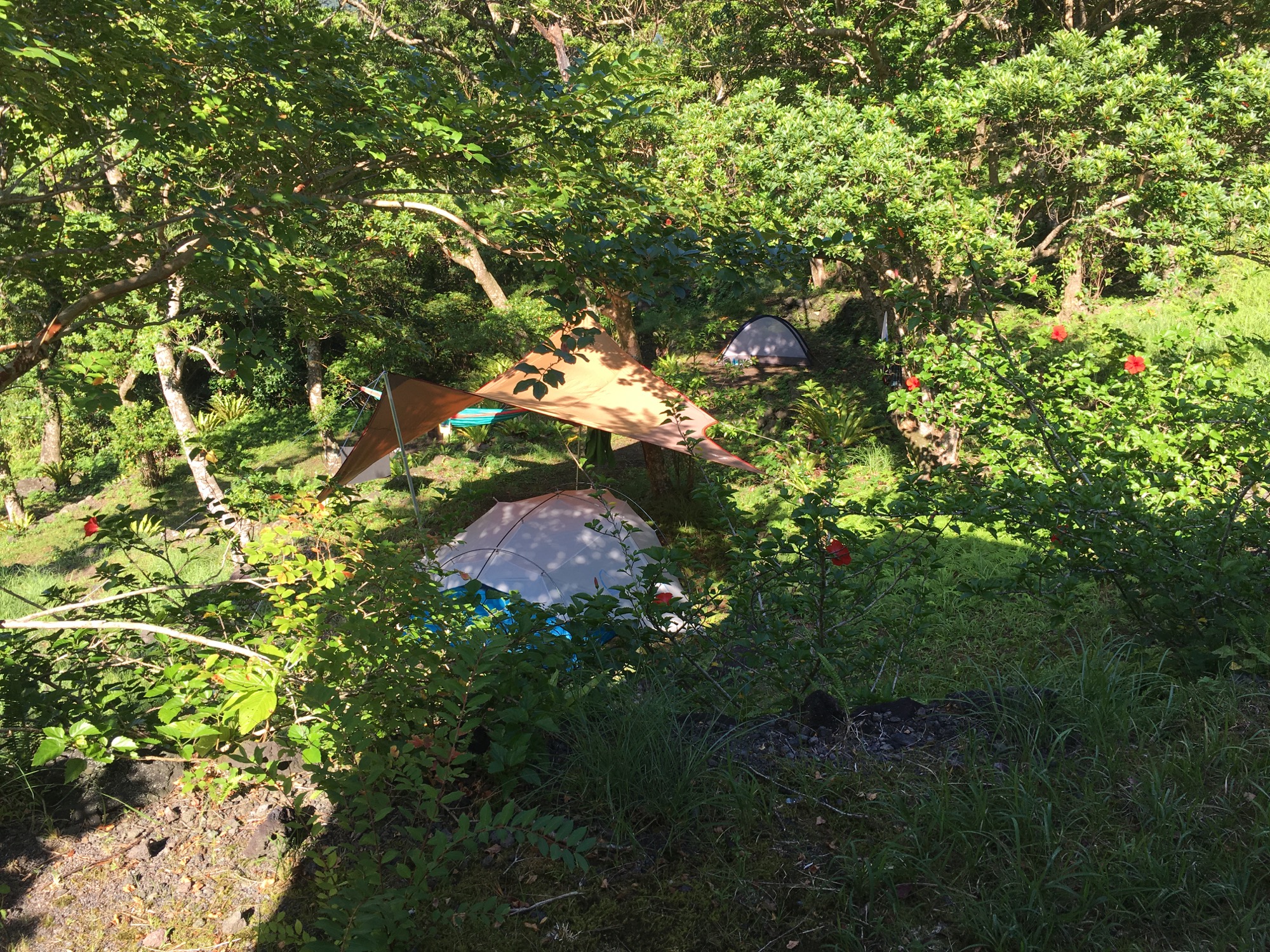 The campground is inside the crater on the side of the smaller volcano. The smaller volcano has many vents spewing steam out of the ground. We were told that sometimes the ground in the campsite can get very hot. I was skeptical about this, thinking maybe it was a lost in translation moment but it is very true - as I found out in the middle of the night. 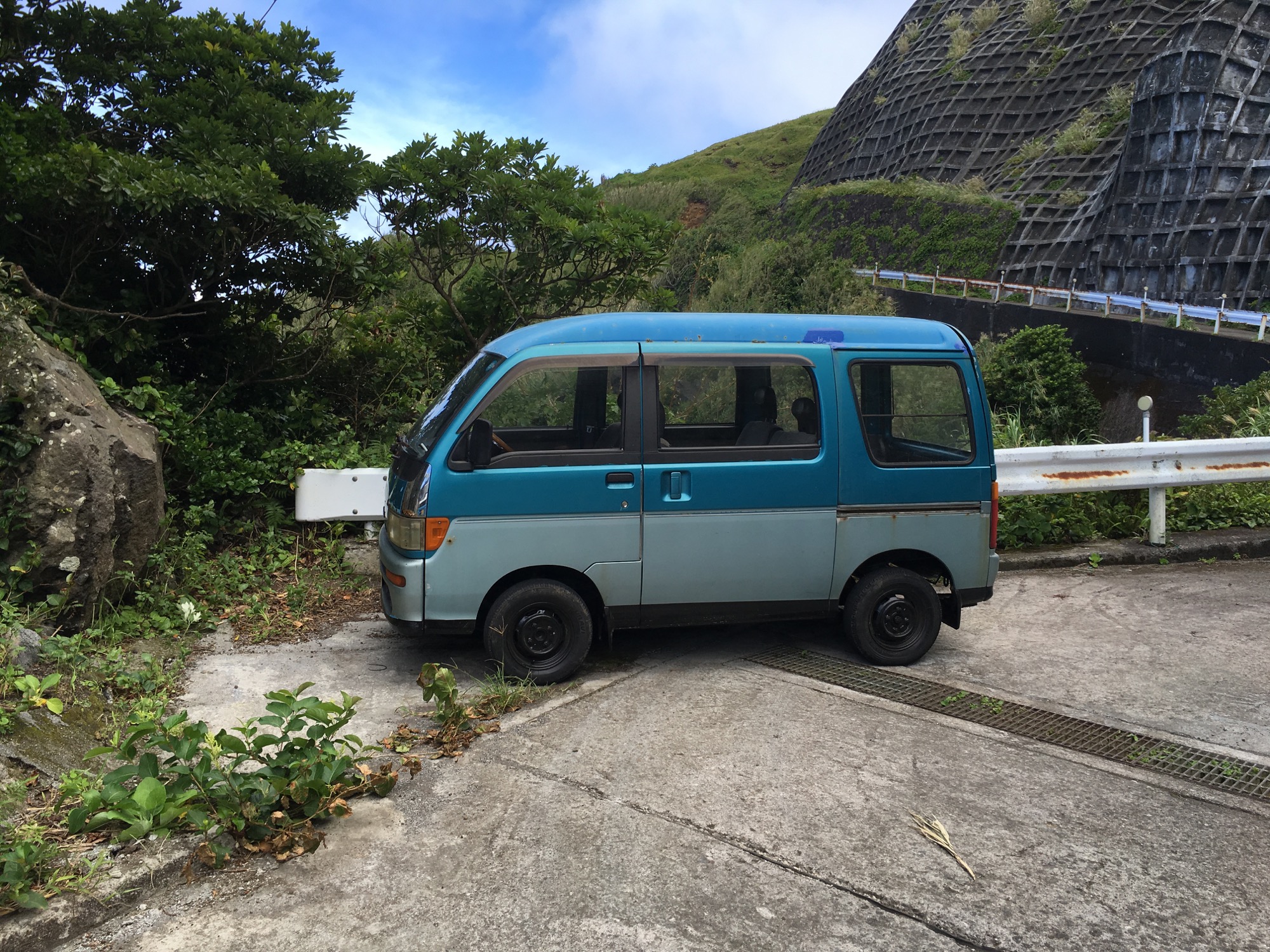 A short three minute walk from camp is the island's only onsen/sauna. The water and the sauna are heated by the volcanic steam and the ground all around the onsen is very hot. 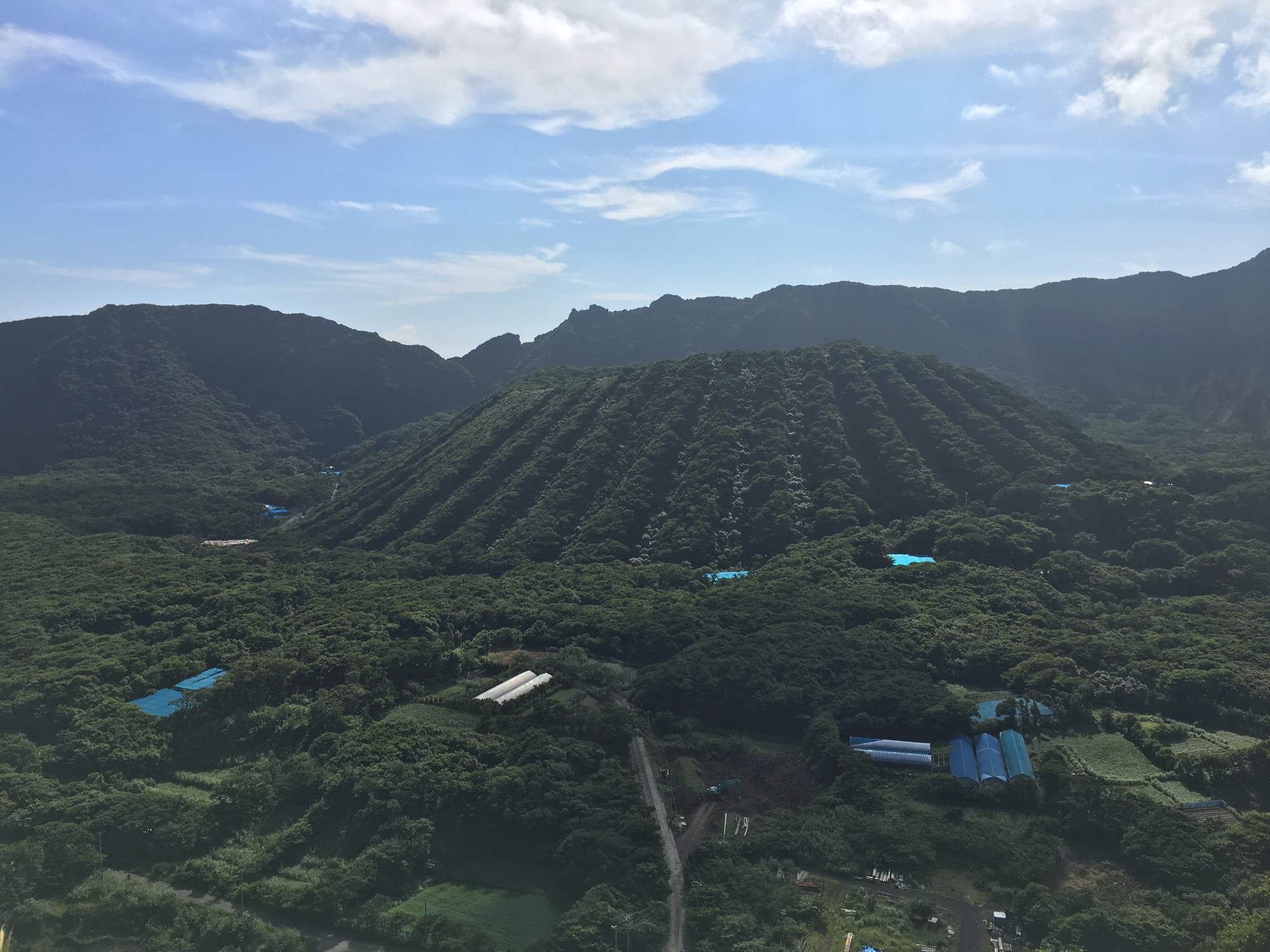 After setting up camp we drove back down to the port and did some snorkeling and spear fishing. My friend got a fish (!) but our swim was cut short when he was stung by a jellyfish (possibly a Portuguese Man-O-War). We piled back in the car and drove to the grocery store to get him some vinegar and then we headed to the onsen for a nice long soak. Between those two natural remedies the swelling went down quickly and within a few hours he was feeling much better. According to one of the locals August and September is the jellyfish migration, so if you are visiting at that time be careful.

The island has a small network of roads, many of which have fallen into the ocean a long time ago.

We felt so blessed to visit the island during such great weather. During the day it was windy (which helped us deal with the humidity) and the sun was shining. At night you could see a million stars. Aogoshima is known for three things - its salt, the shochu, and star gazing. All of which we sampled and thoroughly enjoyed... 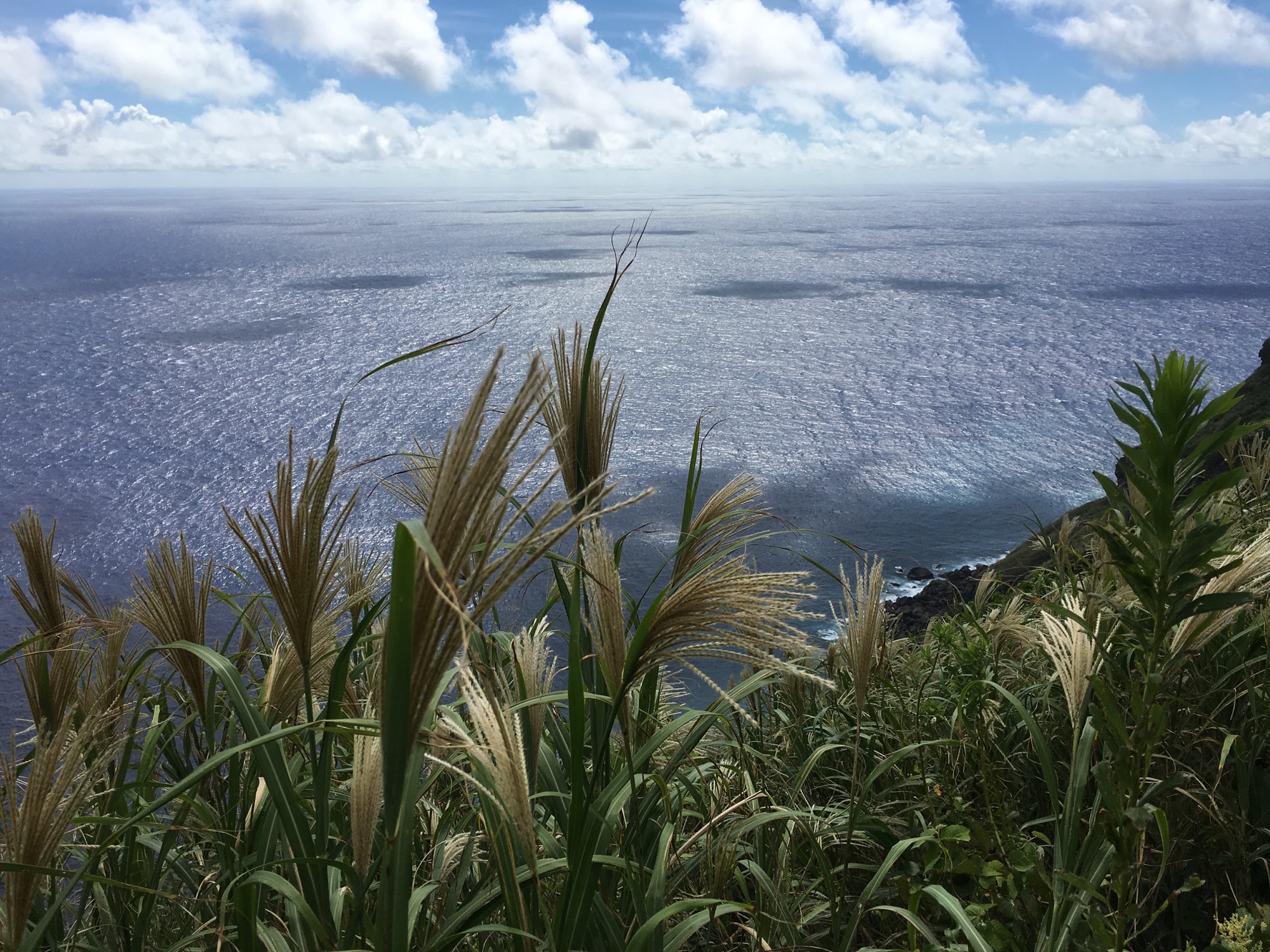 On the day we were supposed to head back to Hachijojima to catch our flight home there was a 20-30% chance that the seas would be too rough for the ferry to land. With the fast approaching swells from yet another typhoon we would possibly be stuck on the island for another week! Thank God the ferry was able to land and we were able to get off the island. Not that we didn't thoroughly enjoy our time on the island we just were not adequately prepared to weather a typhoon, in our three season tent, on a tiny island in the middle of the Pacific Ocean. 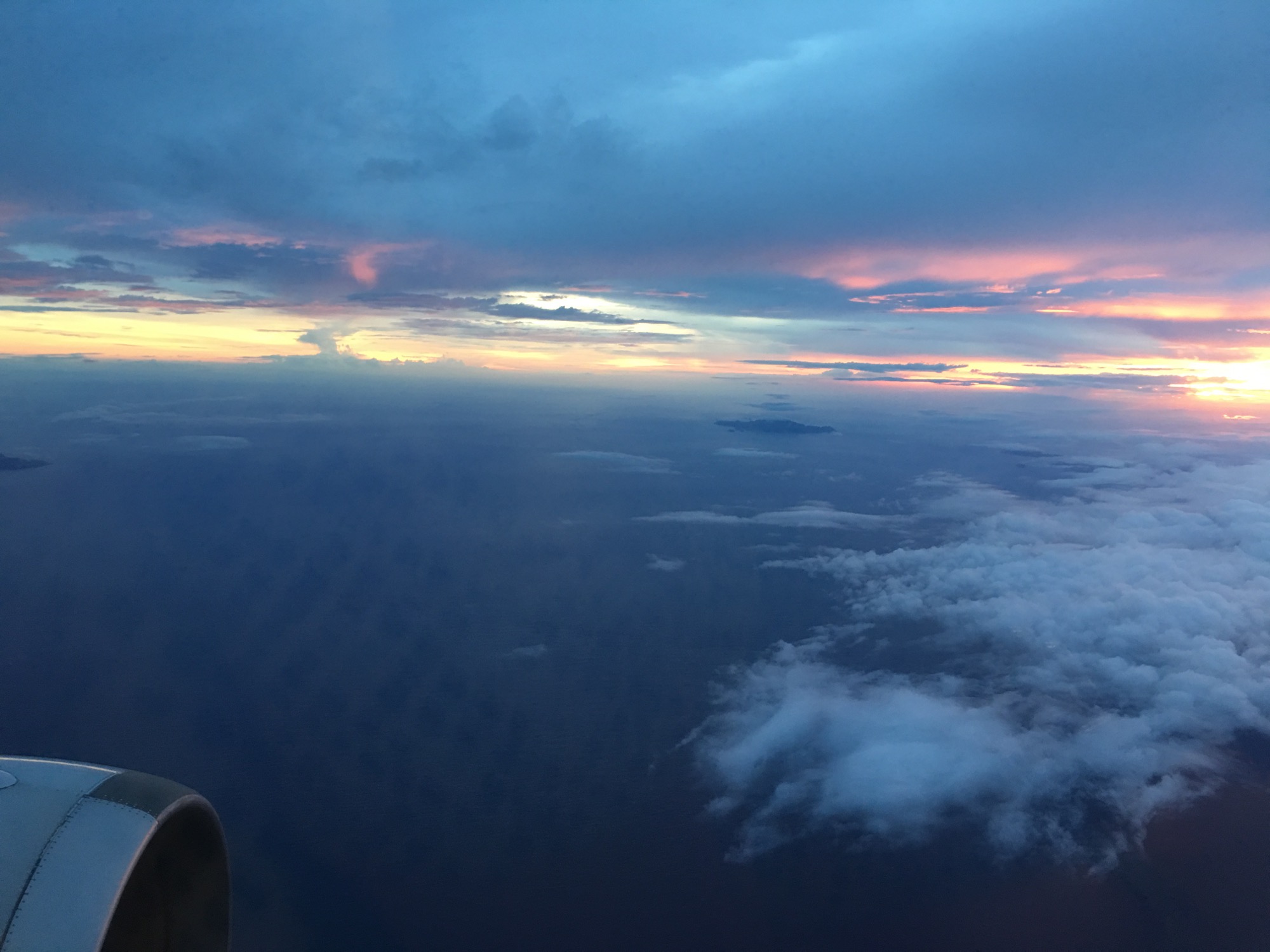 Sunset on the flight back to Tokyo from Hachijojima