To the southwest of Tokyo lies Izu Peninsula - it is a fairly small peninsula, with its widest point being roughly 35 km (~22 miles) across. It is renowned for the crystal clear ocean water and is a very popular place to scuba dive and snorkel. It is also very mountainous (Mt. Amagi (天城山) is the highest point on the peninsula coming in at 1,406m (4,612ft)). The mountains here are very rugged and many areas are quite remote. There are small fishing villages that are clawed into the most precarious yet jaw dropping locations. Tsunamis are a real threat here and some of the larger villages have tsunami towers in the town squares. It is a wild place with exquisite beauty that really cannot be described.

An impressive archipelago near Matsuzaki

During the official fishing season in Japan I had caught many Yamame and Iwana but there was another trout species that I had not caught yet. Amago. I told my friend Kado-san that I really wanted to catch one and round out my trifecta. He told me that despite the Japanese law that trout fishing ends October 1st, there were a few streams on Izu Peninsula that we could fish and that were also prime habitat for Amago. We settled on a date and after receiving permission from both our wives we packed up my Kei van and hit the road. 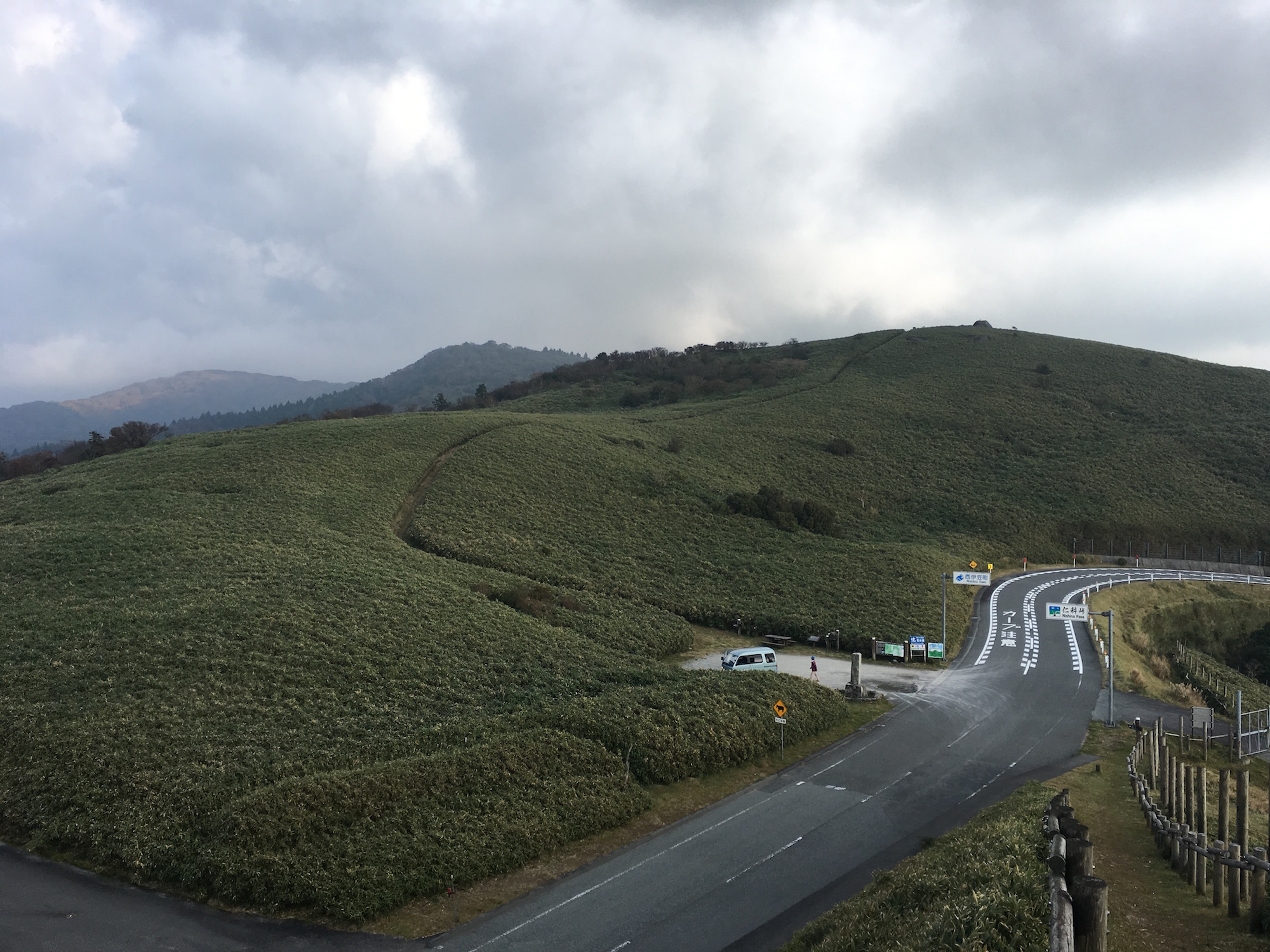 A few hours later we arrived at our own private and free beach camp. The river that we were going to fish later entered the ocean a mere 50 meters from our campsite. It was most certainly a little slice of heaven.

After setting up our campsite we drove about 10 minutes up the canyon behind camp, donned our fishing gear, tromped through a few harvested rice fields, dodged some humongous spiders, climbed into the river canyon, and proceeded to fish. 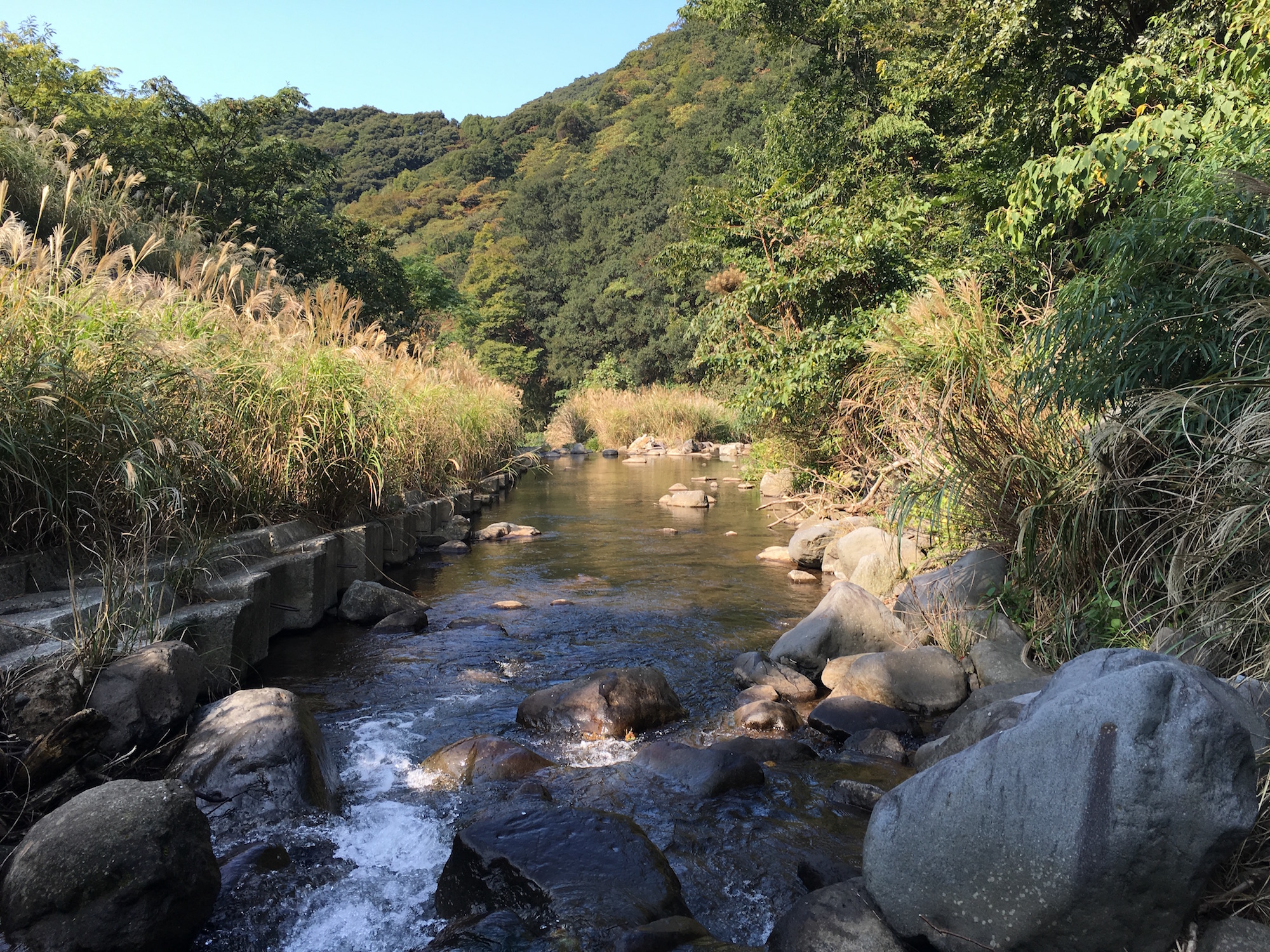 The first promising pool did not provide any results so I crept upstream. On my second cast into the second pool I got a strong bite but missed the set. I continued working the pool for several minutes but did not get any results. I was getting ready to move on when my fly was slammed hard from a dark and murky pool. The Amago was enormous, had a very impressive kype (hooked jaw) but surprisingly did not put up much of a fight. I brought him to hand within 10-15 seconds (no net was used).

I ended up catching two very large Amago and 4-5 Japanese Dace, aka Haya はや. The dace ranged in size from 2-5cm and the Amago were roughly 40 & 35cm! Kado-san said he had never seen Amago that big, especially in this particular area! 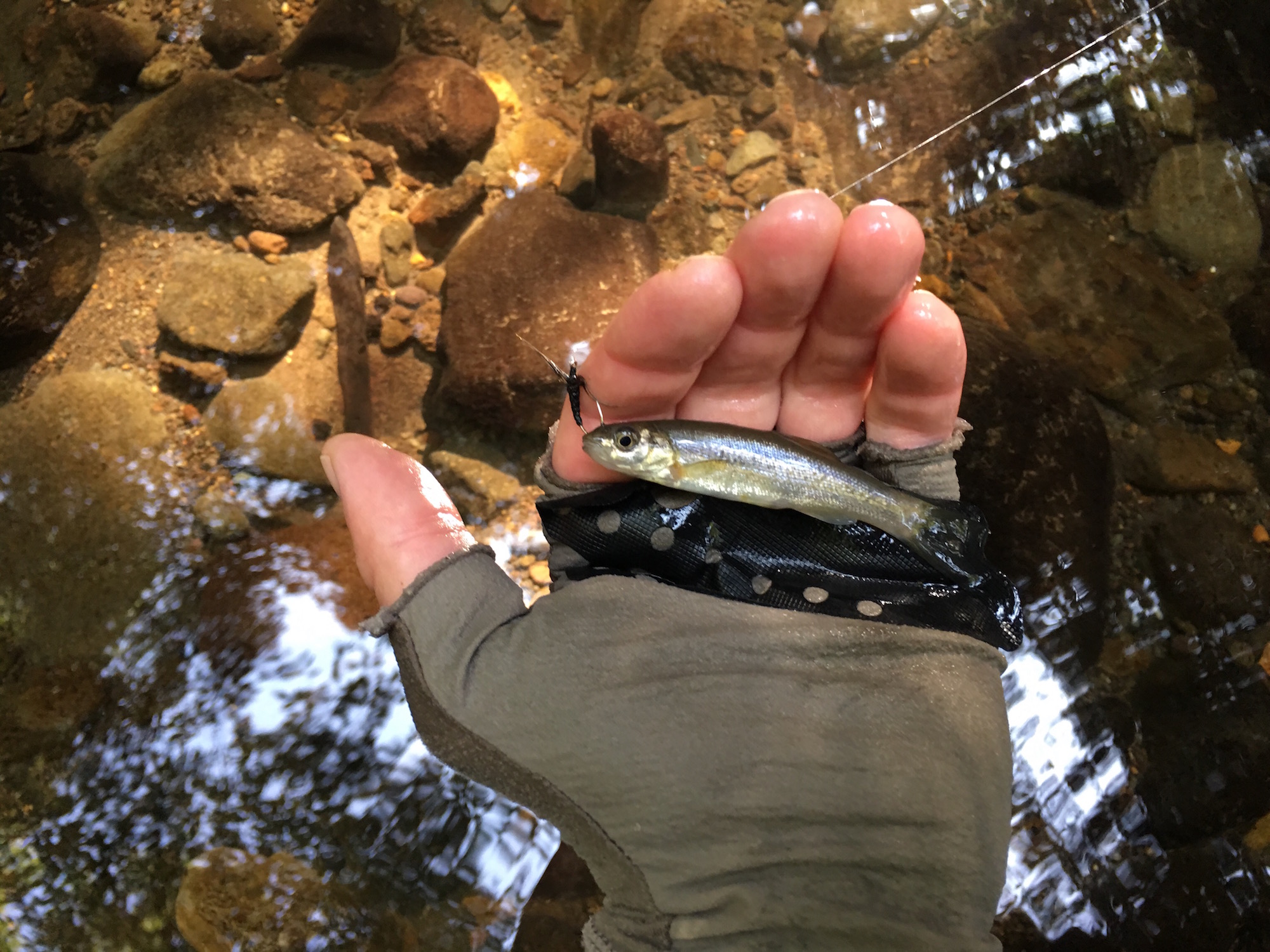 After a few hours of fishing we hiked out to the car and found a nice onsen to soak in. That night we collected driftwood from the beach and sipped on wine while we watched the sunset. It was a perfect ending to a great day! 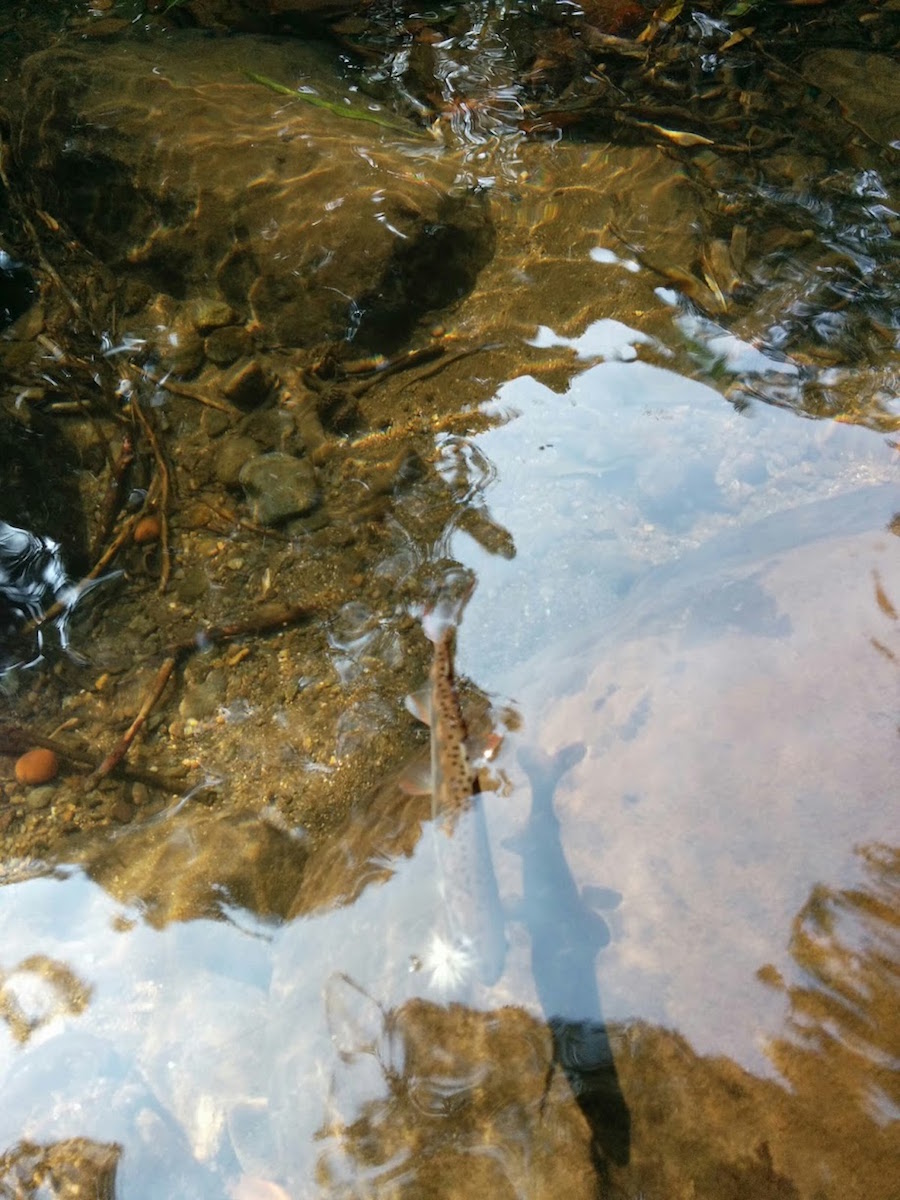 The next day we made breakfast, broke down camp, and headed down the coast. While Izu Peninsula is a very beautiful place it is also rich in metals and mineral deposits. Gold mines, copper mines, and various other mines dotted the landscape; one particular river was contaminated with acid and iron runoff from a nearby mine. The river smelled horrible and as far as I could tell there was nothing being done to prevent the waste from running unimpeded into the ocean. It was pretty sad. We tried fishing in the river (above the contamination) but the fish were very skittish and not as plentiful as the last stream so we left early and went in search of an onsen and some lunch.

We found an outdoor onsen near Ishibu but unfortunately it had just been cleaned and had only a few centimeters of water. So we kept exploring and eventually came across a wonderful seafood restaurant where we stuffed ourselves on very fresh sashimi, rice, miso soup, and tea. 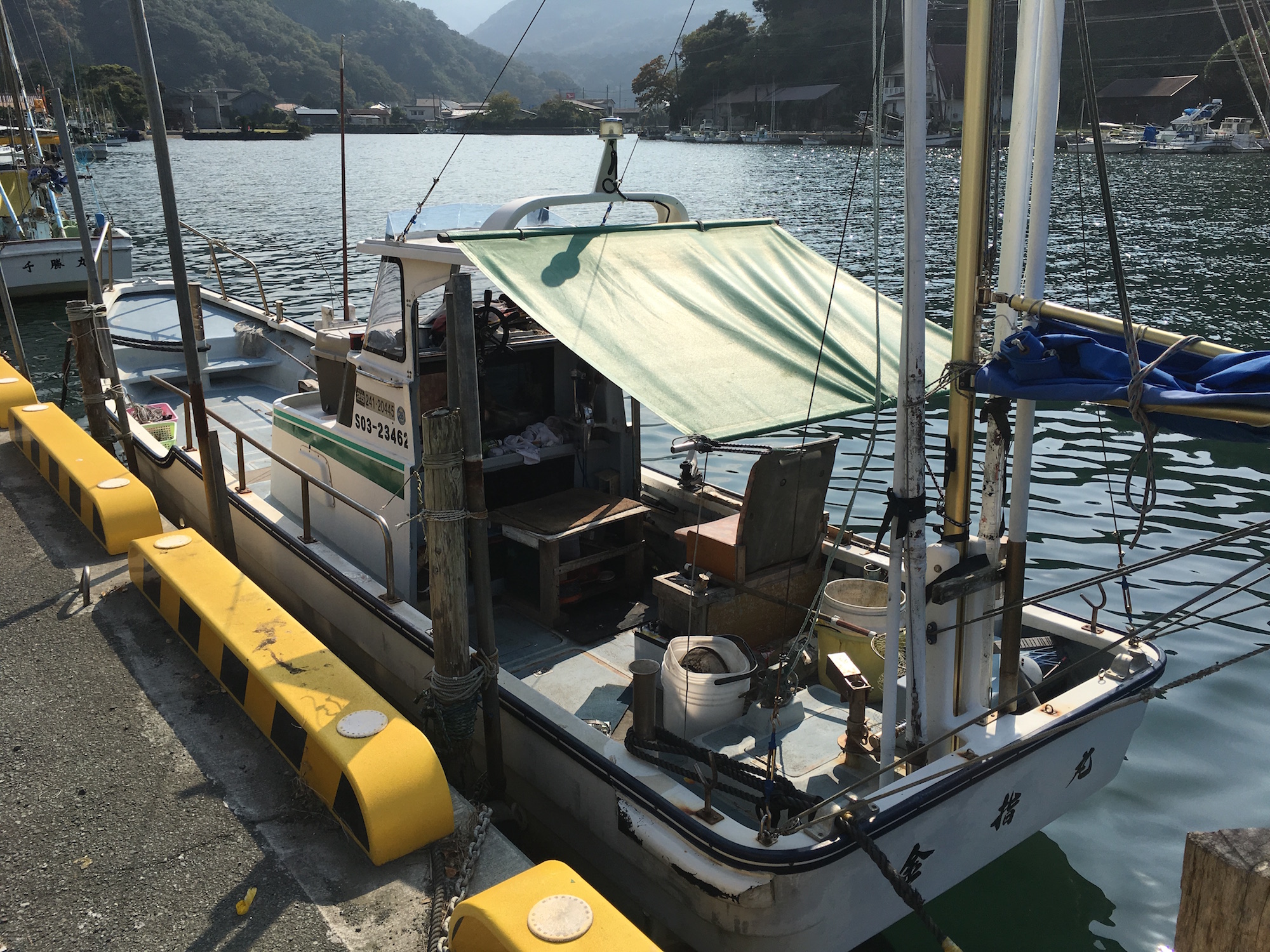 After lunch we talked with a crab fishermen for awhile and then drove into the mountains. It was much colder in the mountains and the views were phenomenal! Once we had gotten over to the eastern side of the peninsula we stopped in at a Yugashima Hot Spring right on the banks of a famous Kano River.

After a long soak we begrudgingly got back in the car and after a quick stop near a wasabi field to try and catch one last Amago we settled in for the long drive home. It had been an epic trip and I was very happy to have completed my Japanese trout trifecta!