Ever since the release of the video Fishing Café "Tenkara with Hisao Ishigaki" this April, it has become quite popular within the Tenkara community. I enjoyed the video immensely and after watching it, I wanted to experience the world of Shokuryoshi firsthand. So after a bit of sleuthing I found the minshuku (民宿) that Dr. Ishigaki-san visited; the place where Yamada-san ties the horse hair tenkara line and talks about his father - the last Shokuryoshi. The minshuku is named 雄山荘and is located between Nozawa Onsen Ski Resort and Naeba Ski Resort in a remote, uncrowded, and not so popular (read: good fishing) valley. Towering over the valley is the immense and foreboding Mount Torikabuto. 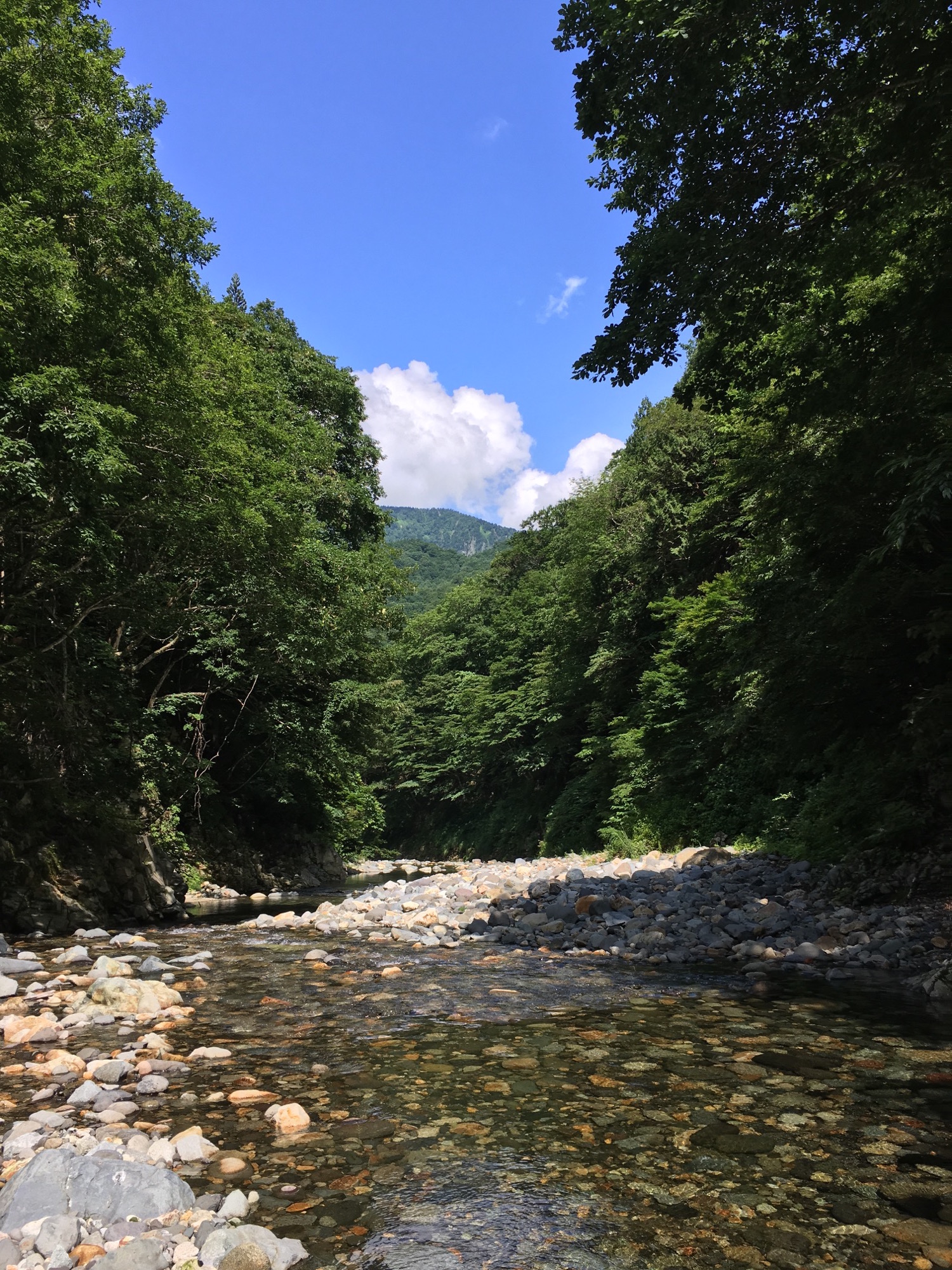 Japanese Lesson: Torikabuto or 鳥兜 means "bird samurai helmet" - it is a wonderfully beautiful flower. Be careful though the root is extremely poisonous (there is an infamous tale in Japan of a jilted lover poisoning his wife with the root). 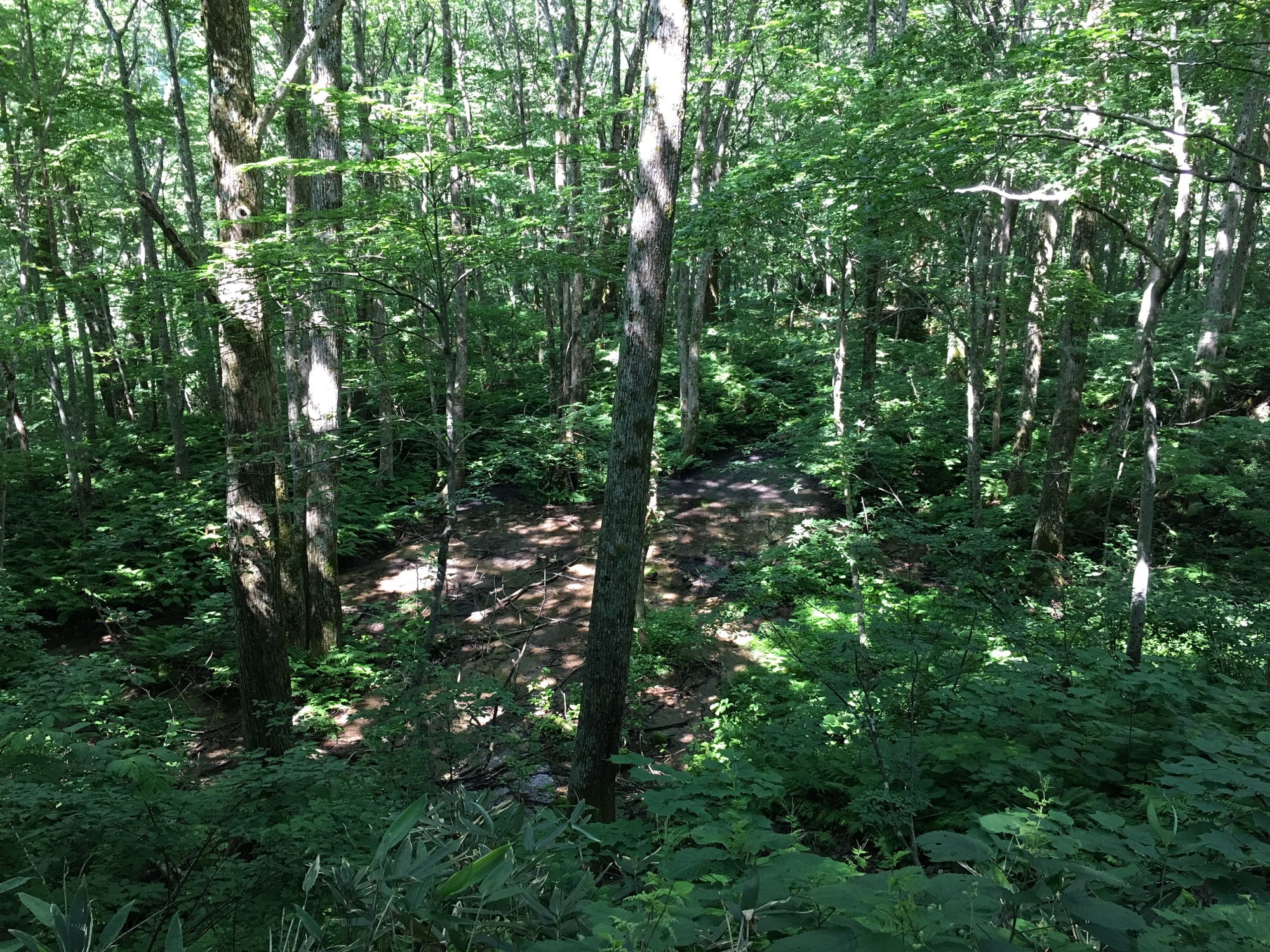 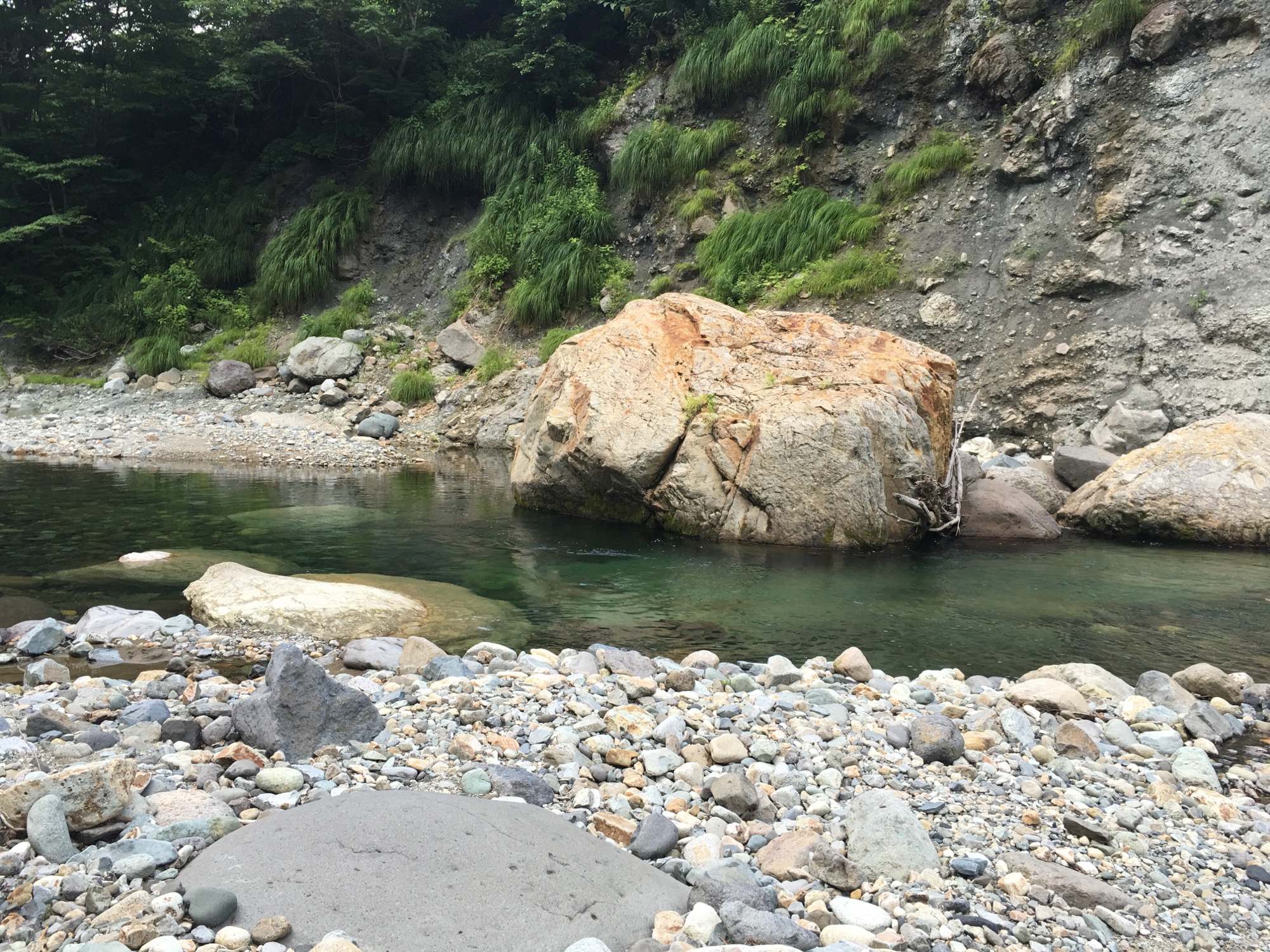 When my alarm went off the sun's warm glow had just begun to grace the damp and dark night sky. After sipping on some Japanese green tea, the caffeine too began to erase the bleariness from my eyes. As I made breakfast my friend Hama began to stir, and after a hearty American style breakfast of eggs and tater tots we grabbed our bags and headed to the car. Thankfully it was early enough that our escape from the labyrinth that is the Tokyo highway system went smoothly. 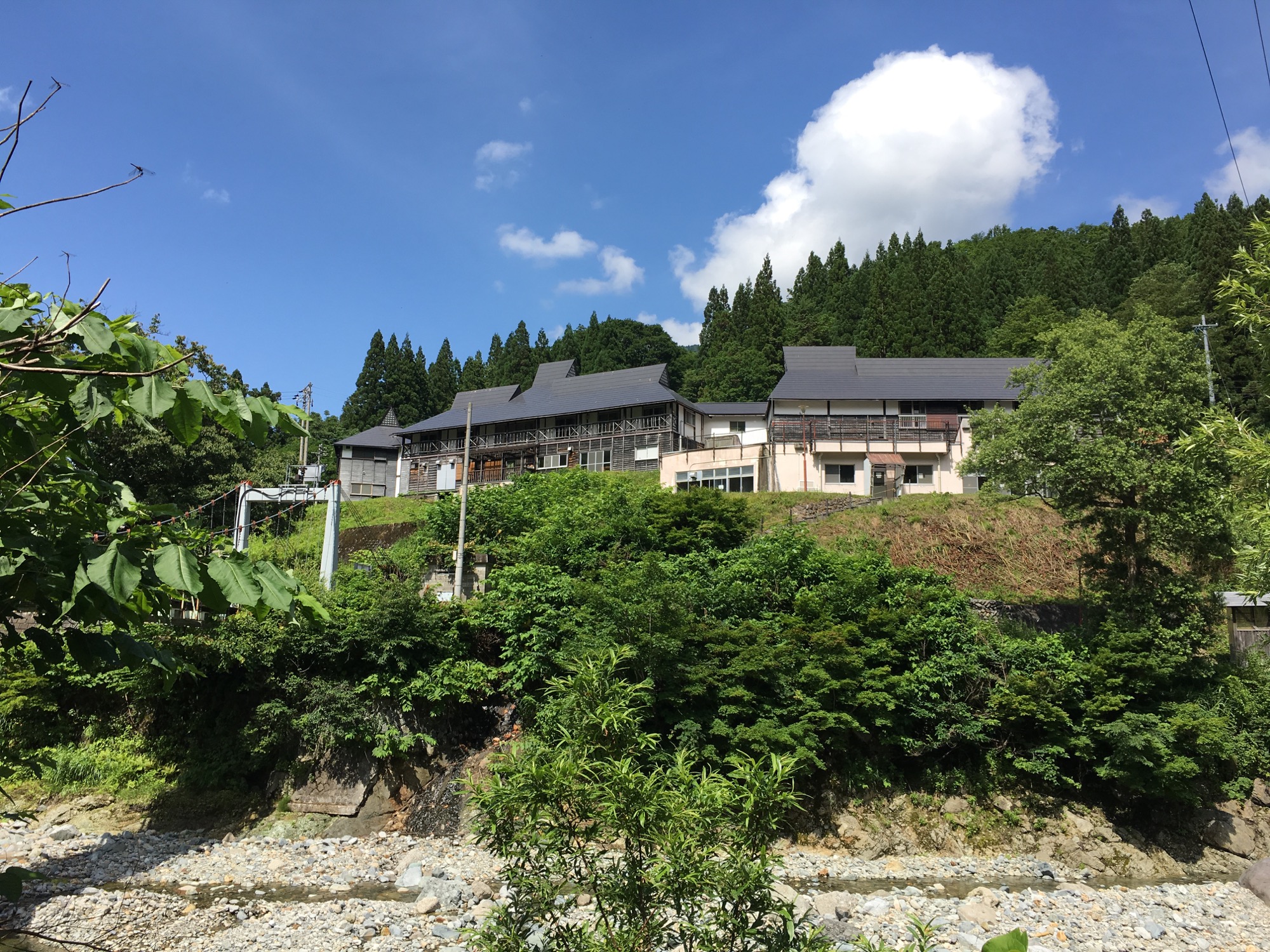 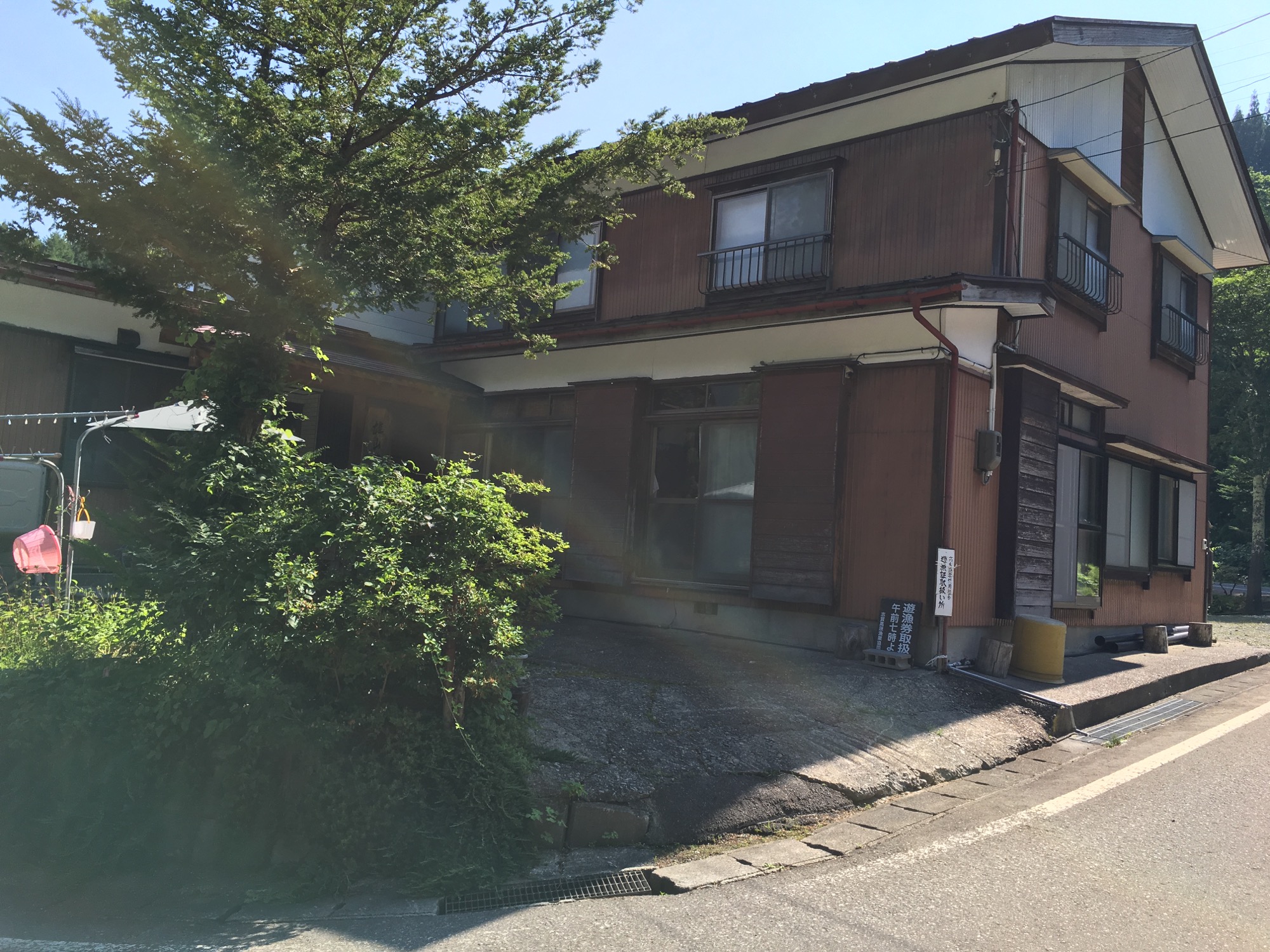 As we drove into the mountains the air began to cool, the sun was shining, and puffy white clouds lazily drifted through the sky before colliding with the sky scraping peaks. 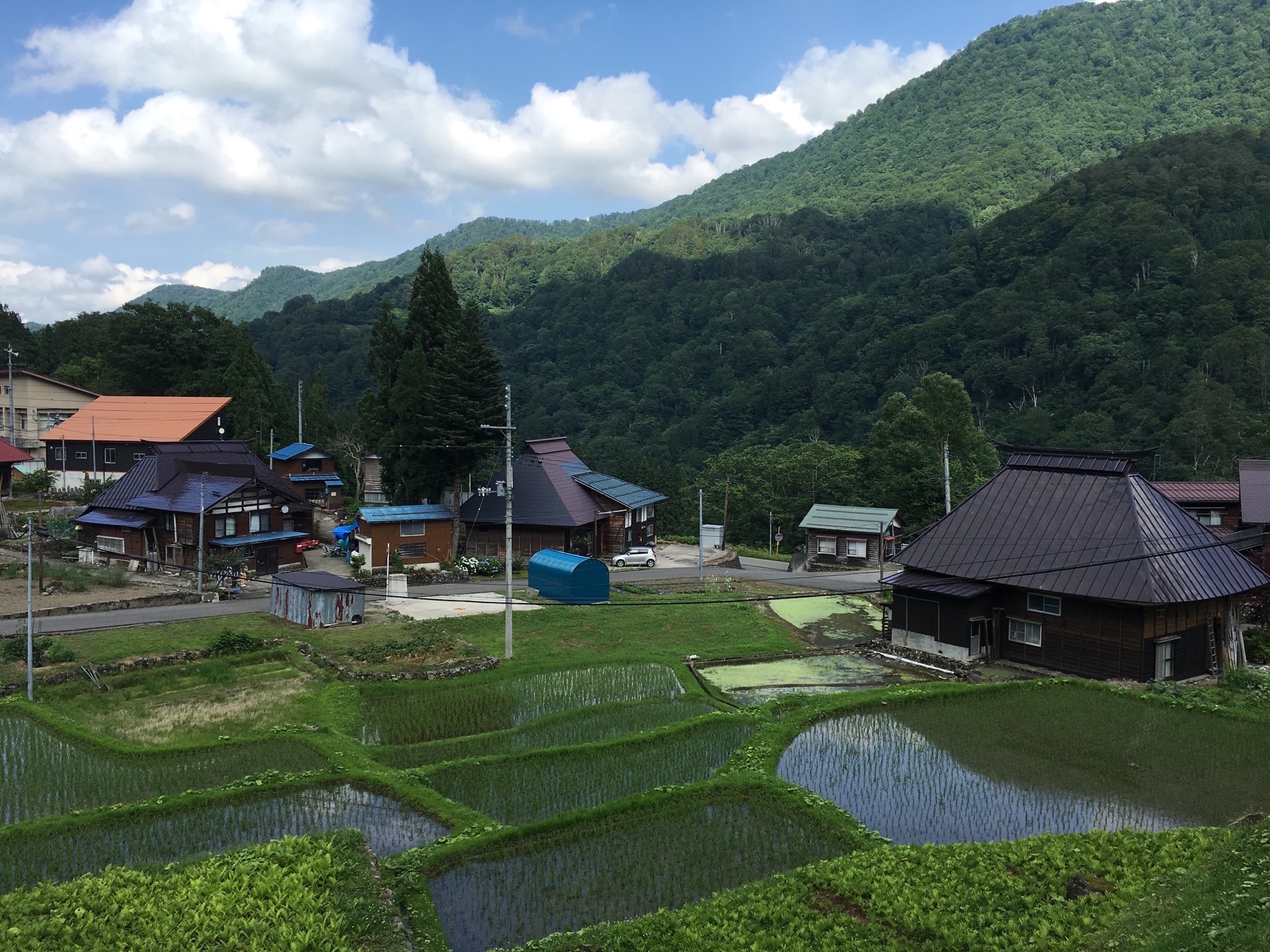 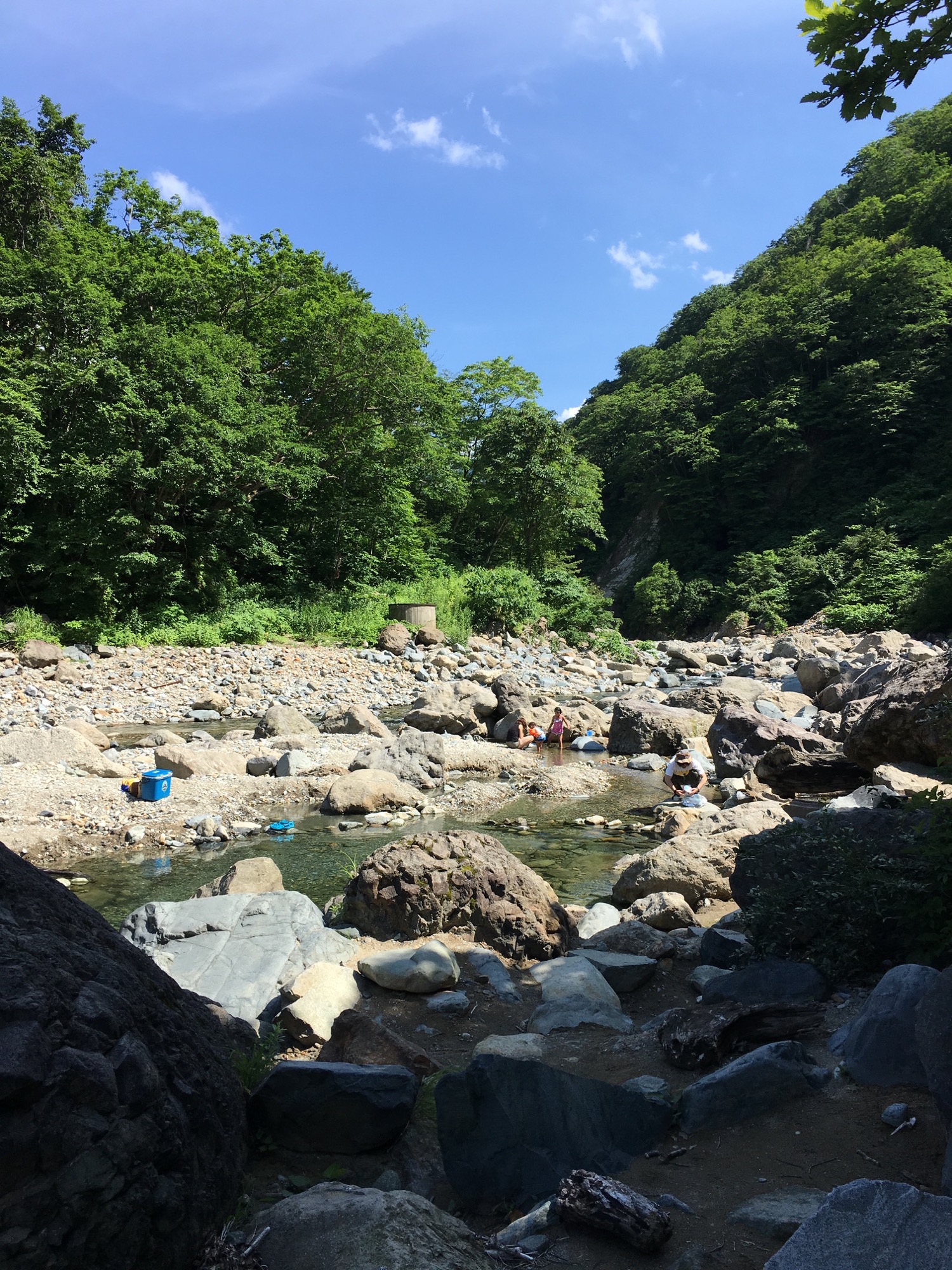 We arrived several hours before our allotted check in time of 3pm so we set off to fish. Our fishing tickets were only ¥500 each which we purchased at the nearby Kiriake Hot Spring lodge. It was a warm and sunny day, not optimal for fishing, still I figured it would be a good opportunity to stretch our road weary legs. As soon as we entered the river we started seeing fish, lots of them. Due to the conditions though they were picky eaters. After fishing a short section of the river we were greeted by a large dam and no possible way around it. A little dejected we turned around and headed back to the hot spring to try the other fork in the river. 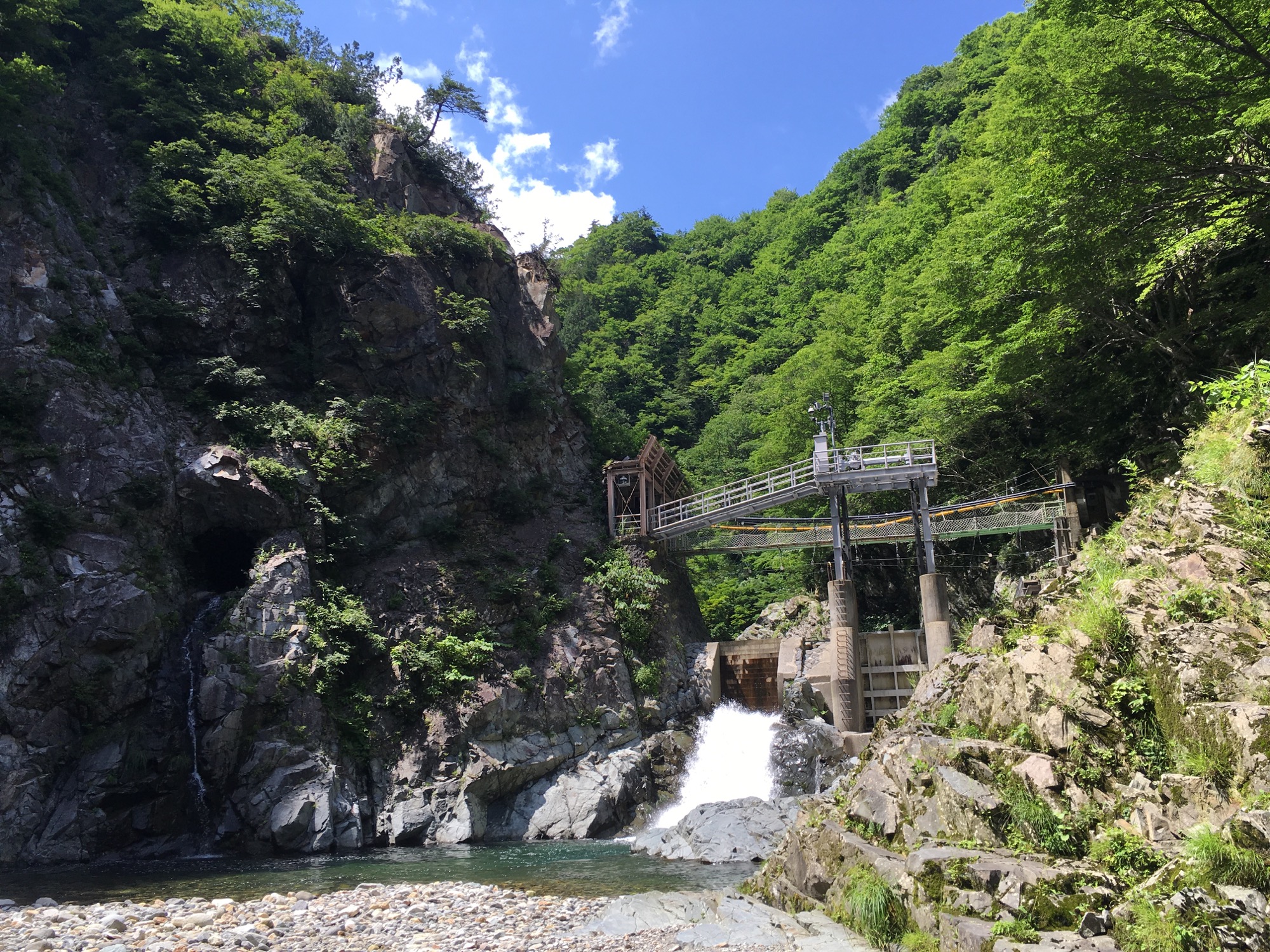 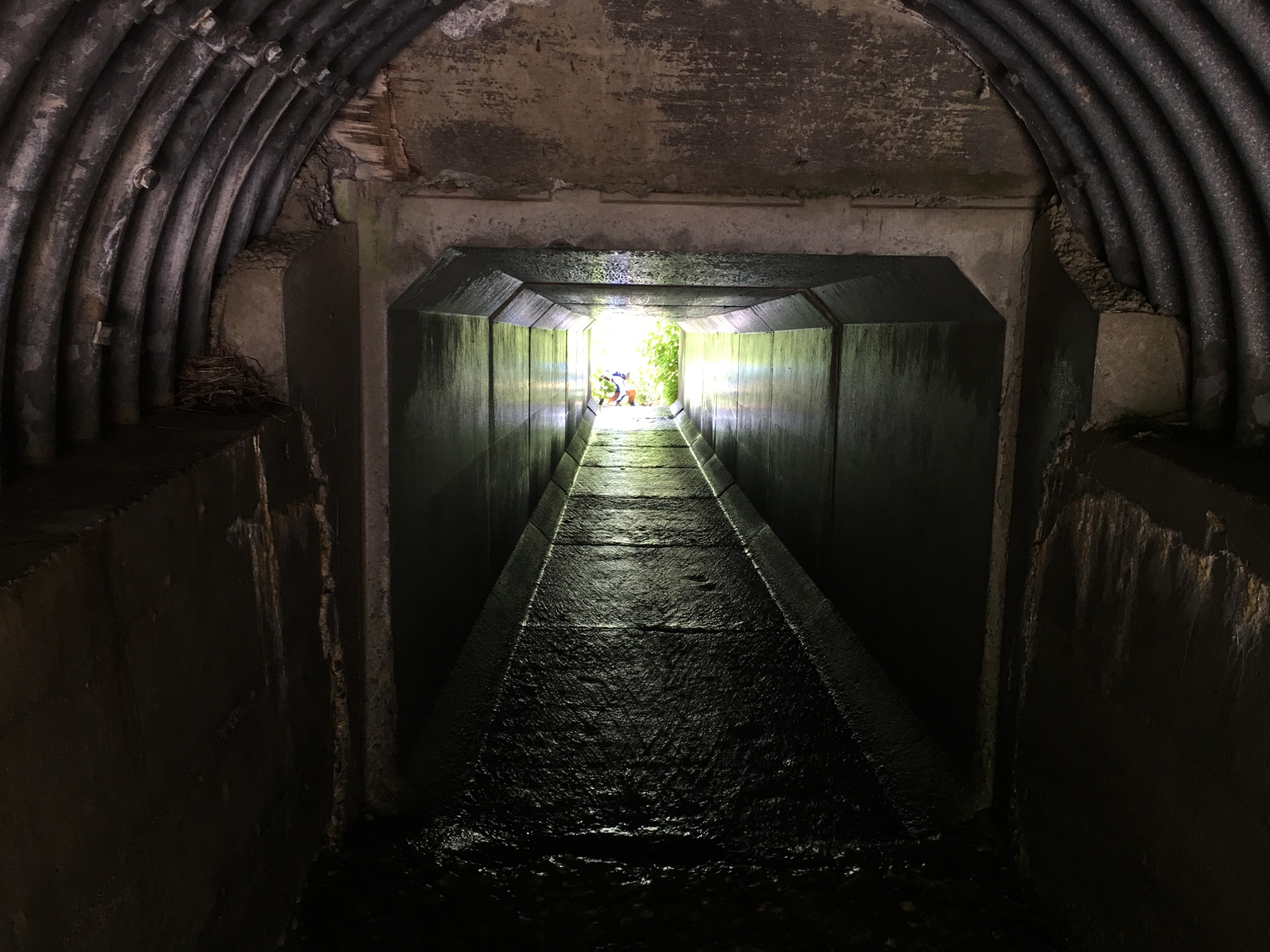 Back at the hot spring we headed up the other river. After passing by the natural hot springs that gurgle into the river we soon came upon another dam, this one was also impassable. With only a few bites and no fish brought to hand we decided to head to our minshuku as it was now almost 3pm. 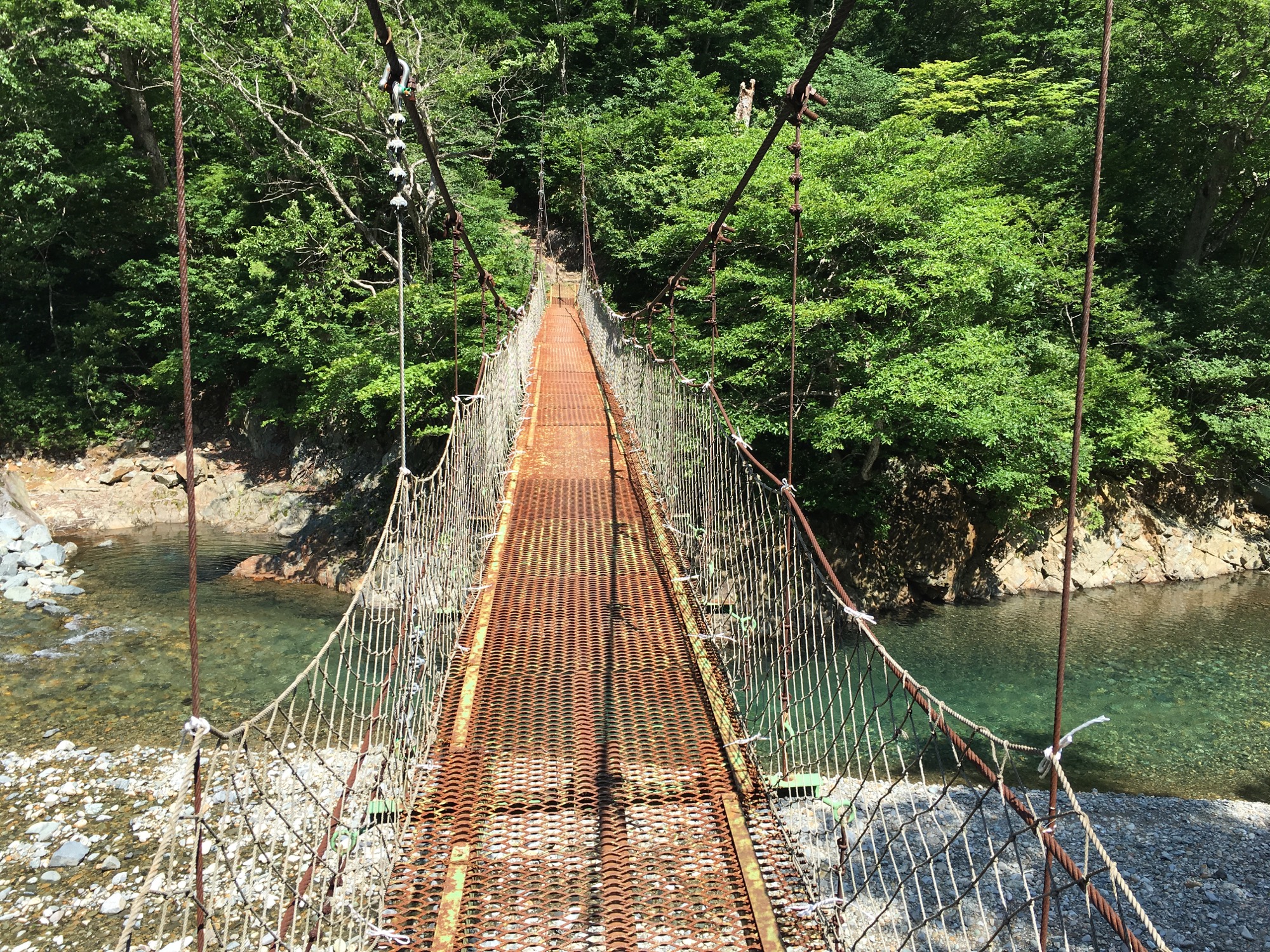 My friend Hama checked us in and explained our lack of luck to the inn-keeper Yamada-san. Before we could even bring our bags inside Yamada-san promptly ushered us into his van to show us a secret locals only fishing spot! After driving down a barely one lane wide road and navigating a muddy foot path we were standing on the side of the river, where the locals fish. 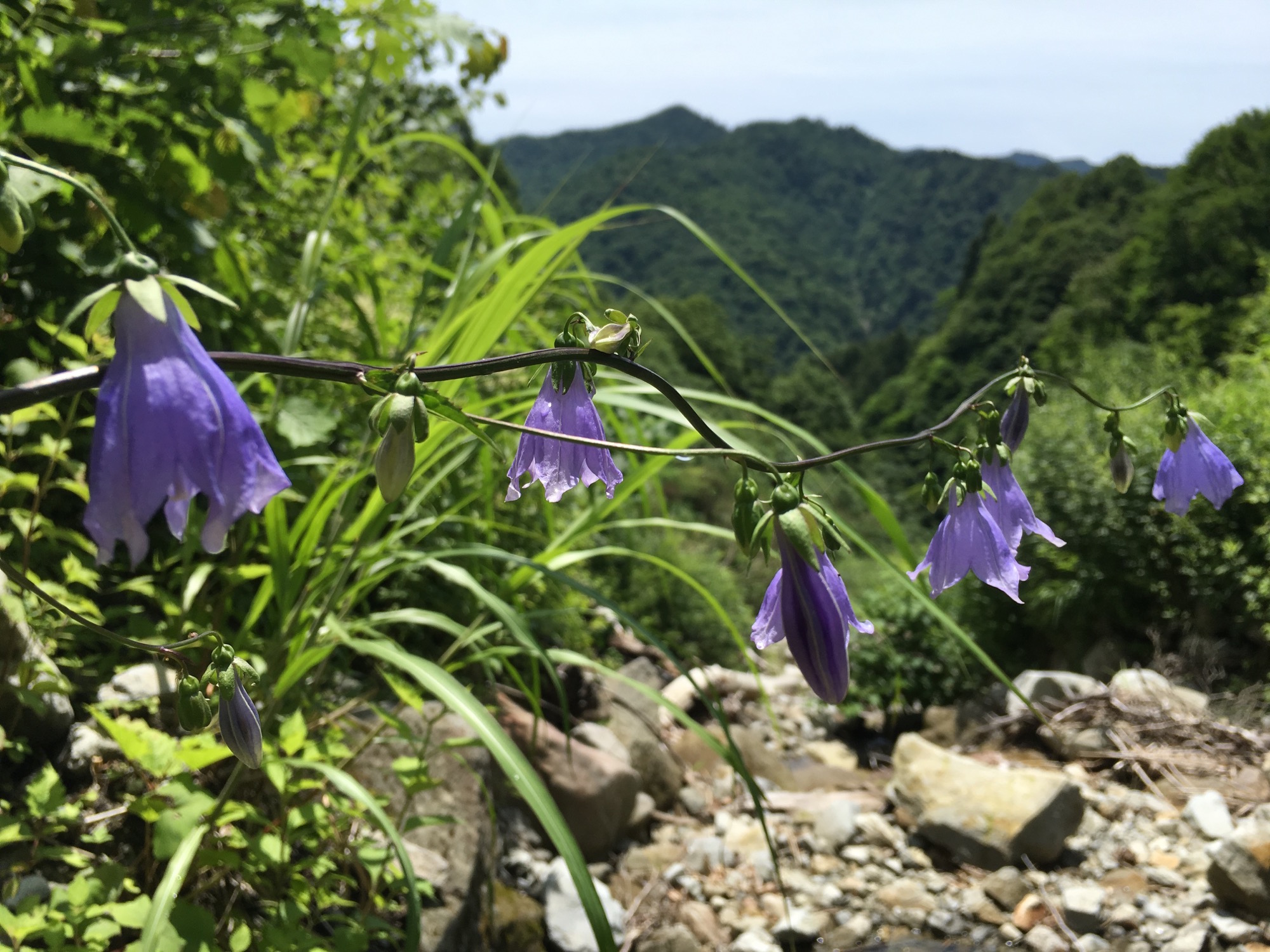 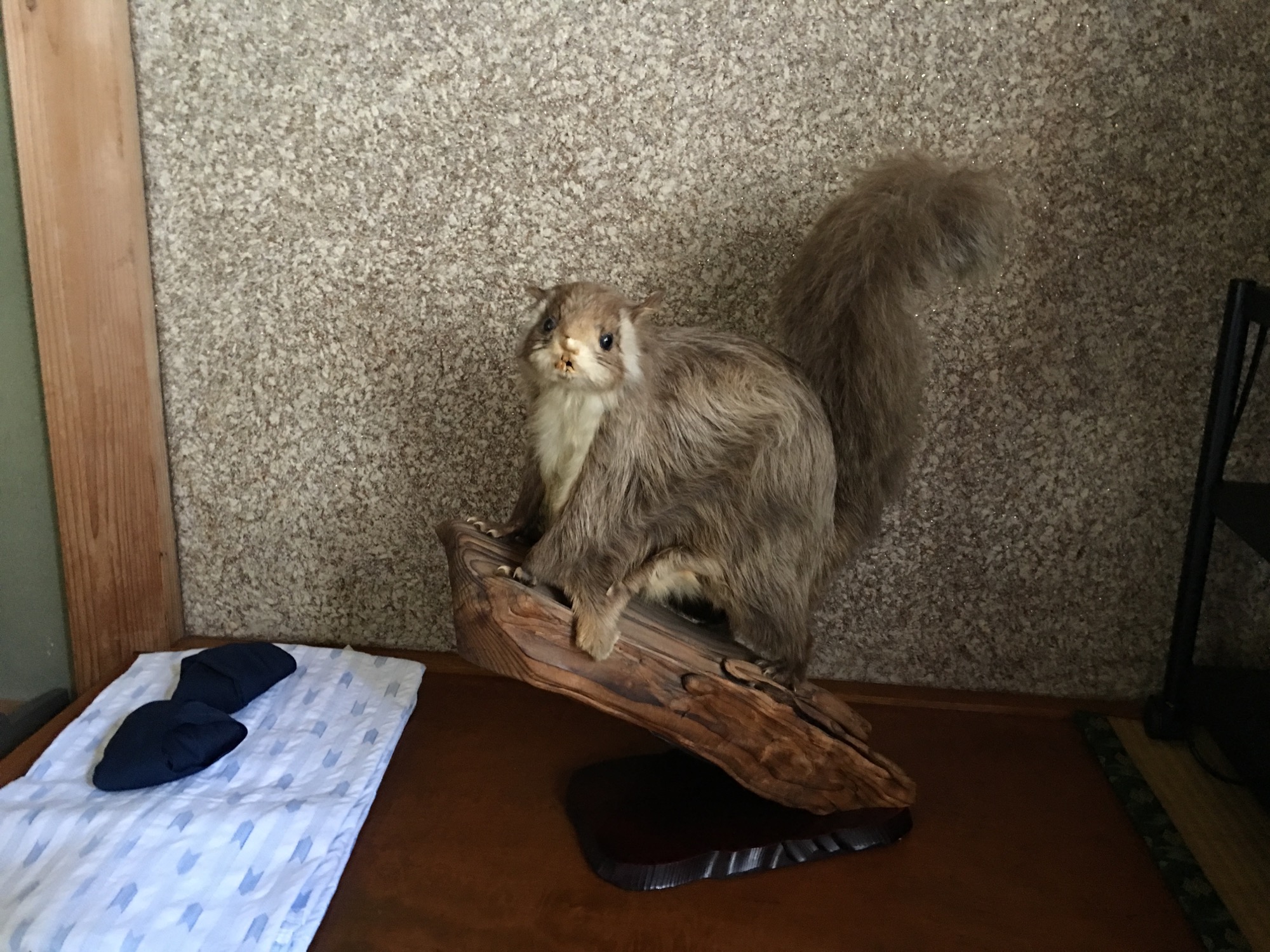 Yamada-san took us back to the minshuku and his wife gave us a tall glass of refreshing oolong tea. While we sipped on the tea Yamada-san showed us his horse hair collection for braiding tenkara lines, his hand tied kebaris, and showed us a few videos about Tenkara in Japan from the early 80's (he even gave me a DVD copy of one of the videos). 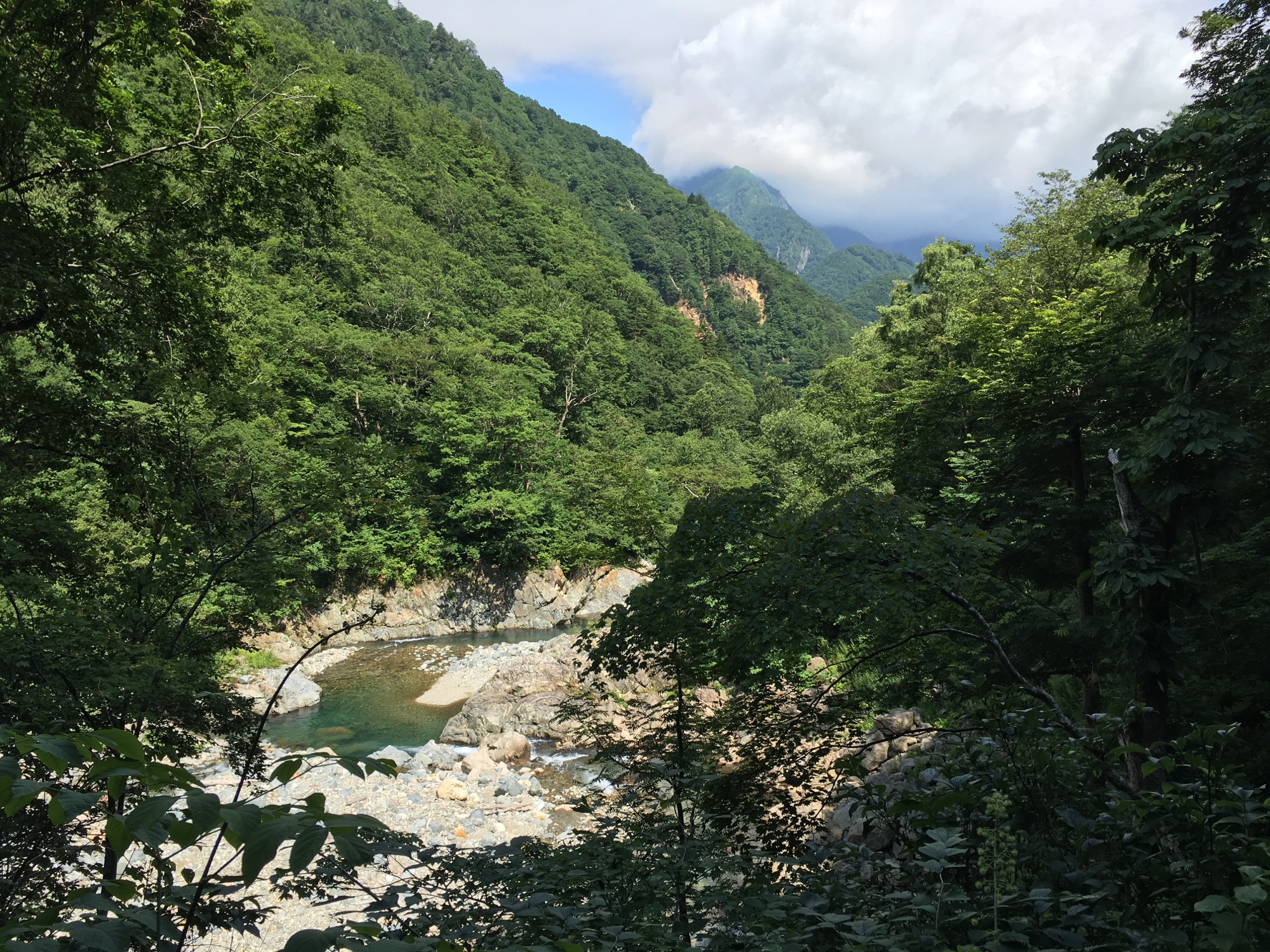 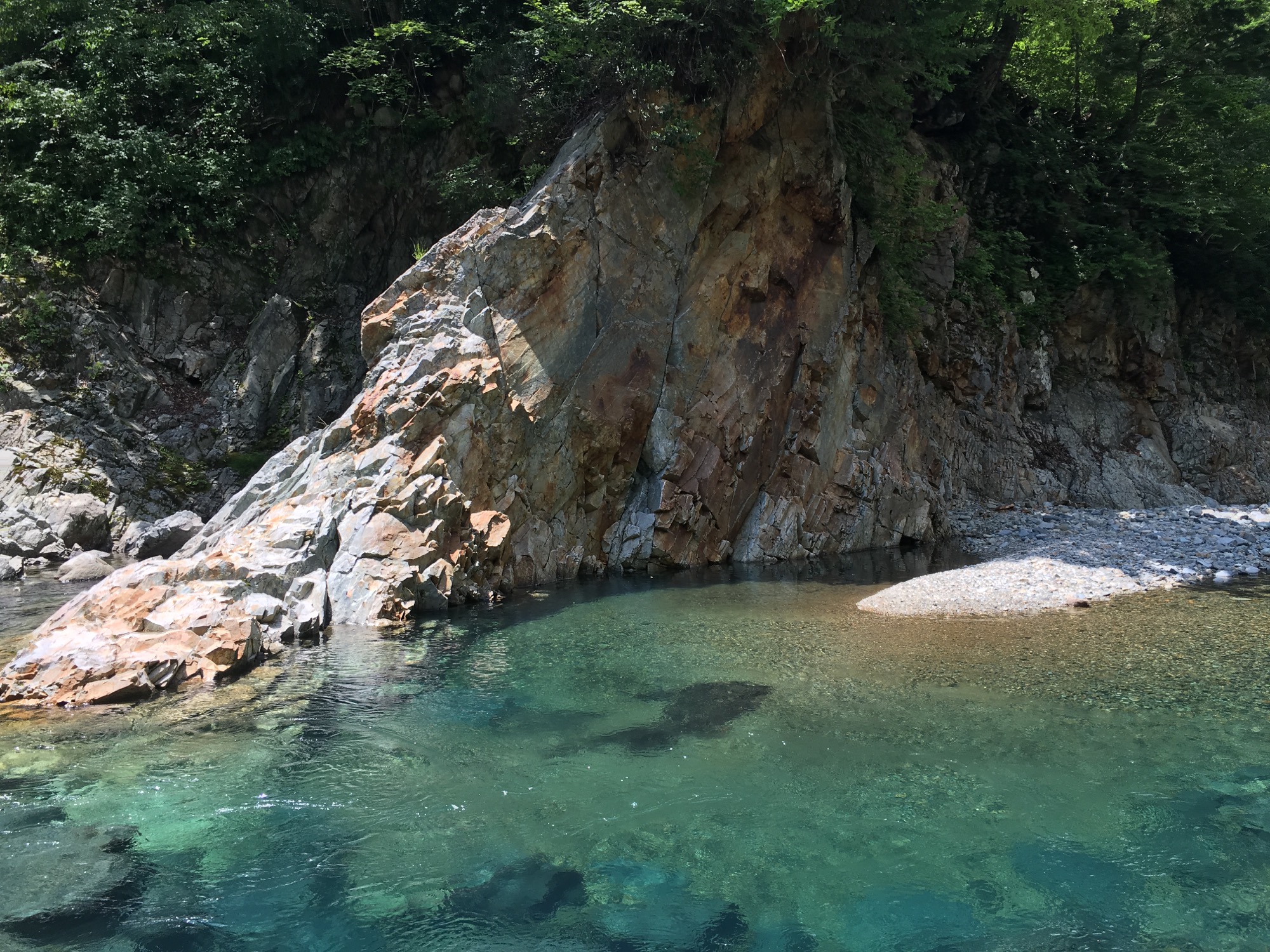 At 1630 Yamada-san sent us on our way to the locals secret spot. He said the fish would be very hungry around 5pm and that we had to get there early to secure a spot as the place would be overrun by locals by 5:30pm. Down at the river we tied on the kebari, that Yamada-san had given us, and then began fishing upstream. The fishing was much better, as Yamada-san had promised, and we didn't see a soul that evening. 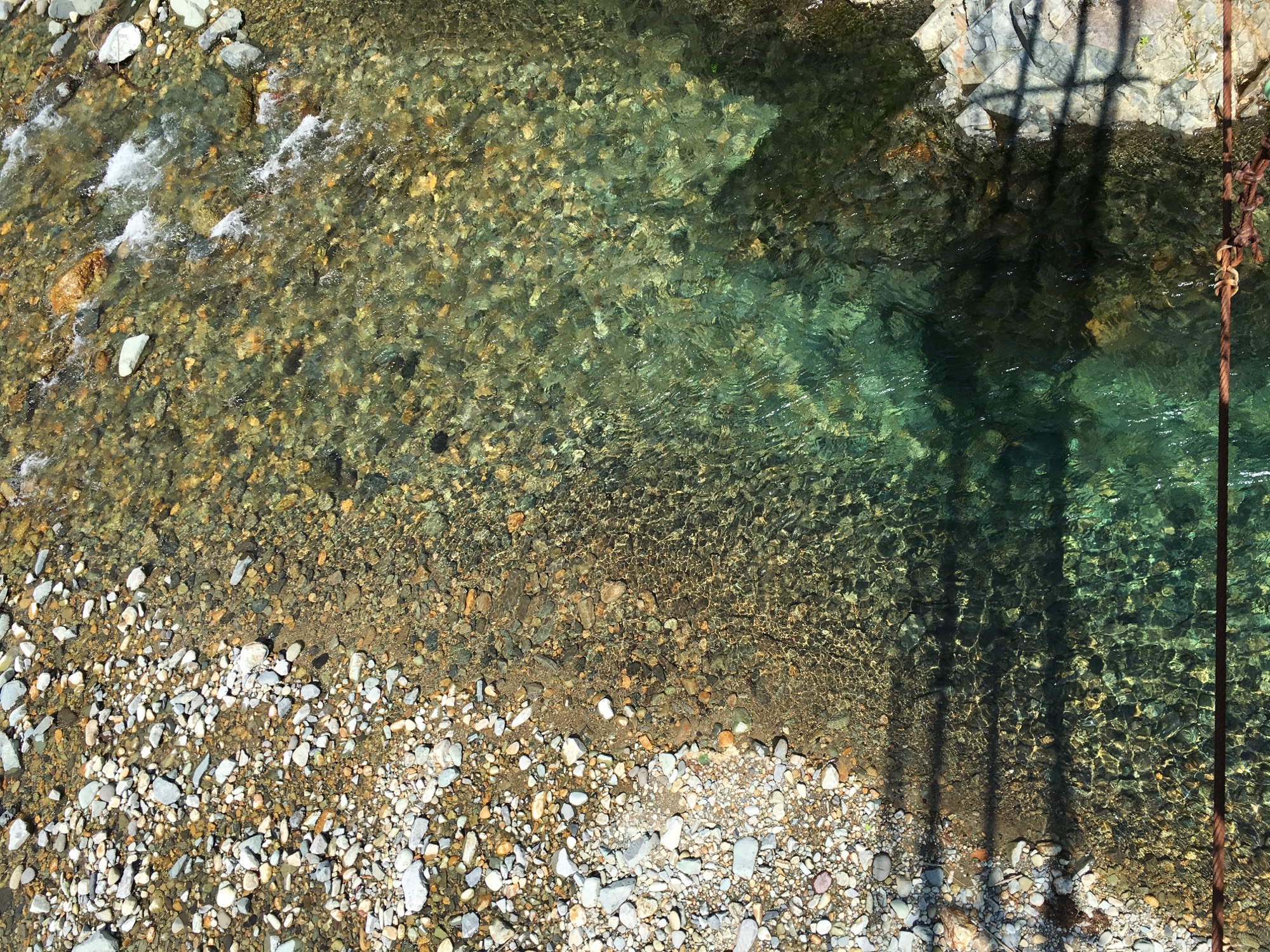 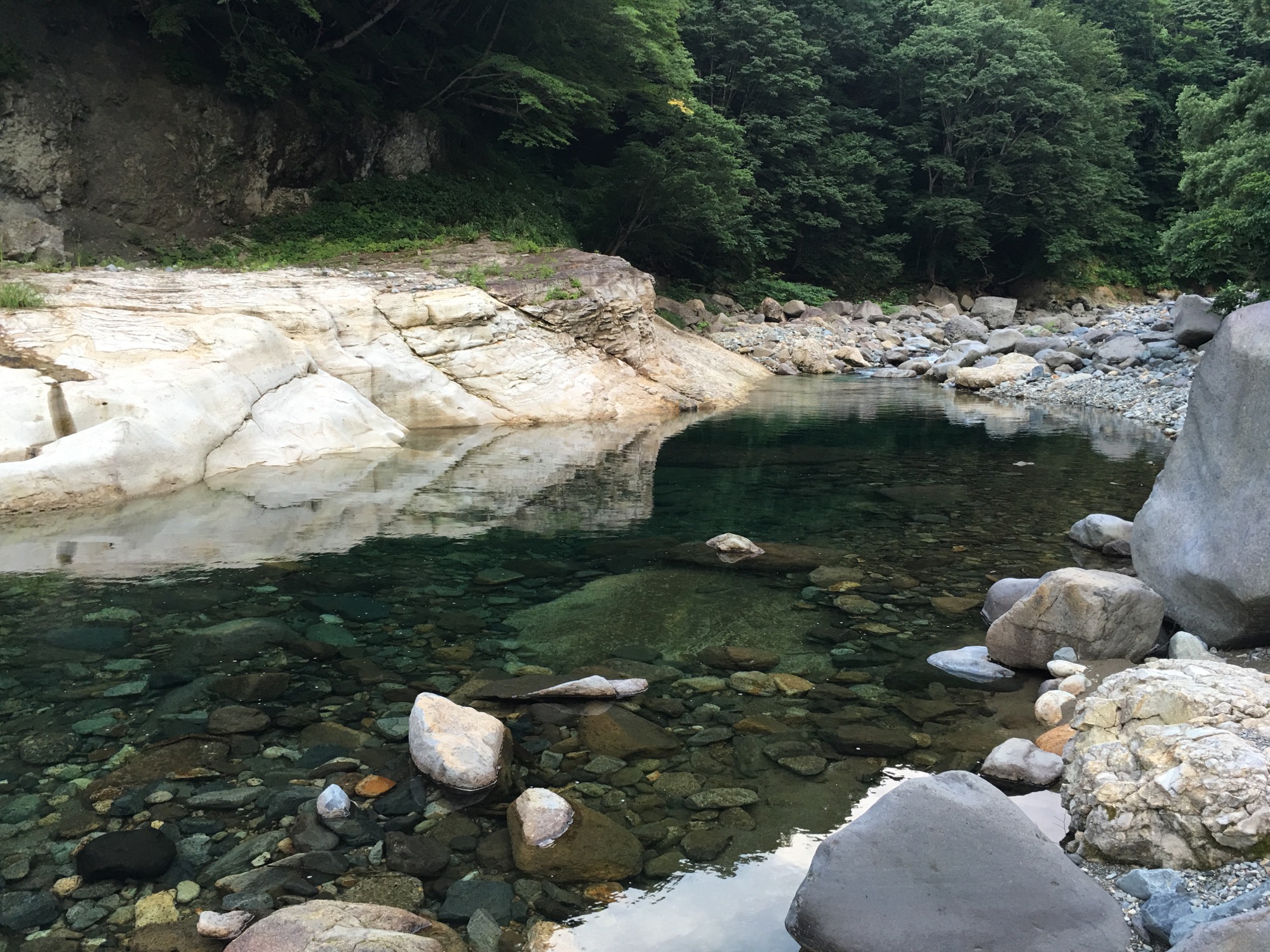 By sunset we had caught 4-5 very nice sized Iwana and had several more hearty strikes/missed sets that were quite fun and unexpected behavior for Iwana. Towards sunset our grumbling bellies announced the need to return to the minshuku first for a nice soak in the private onsen and then a delicious home cooked dinner. 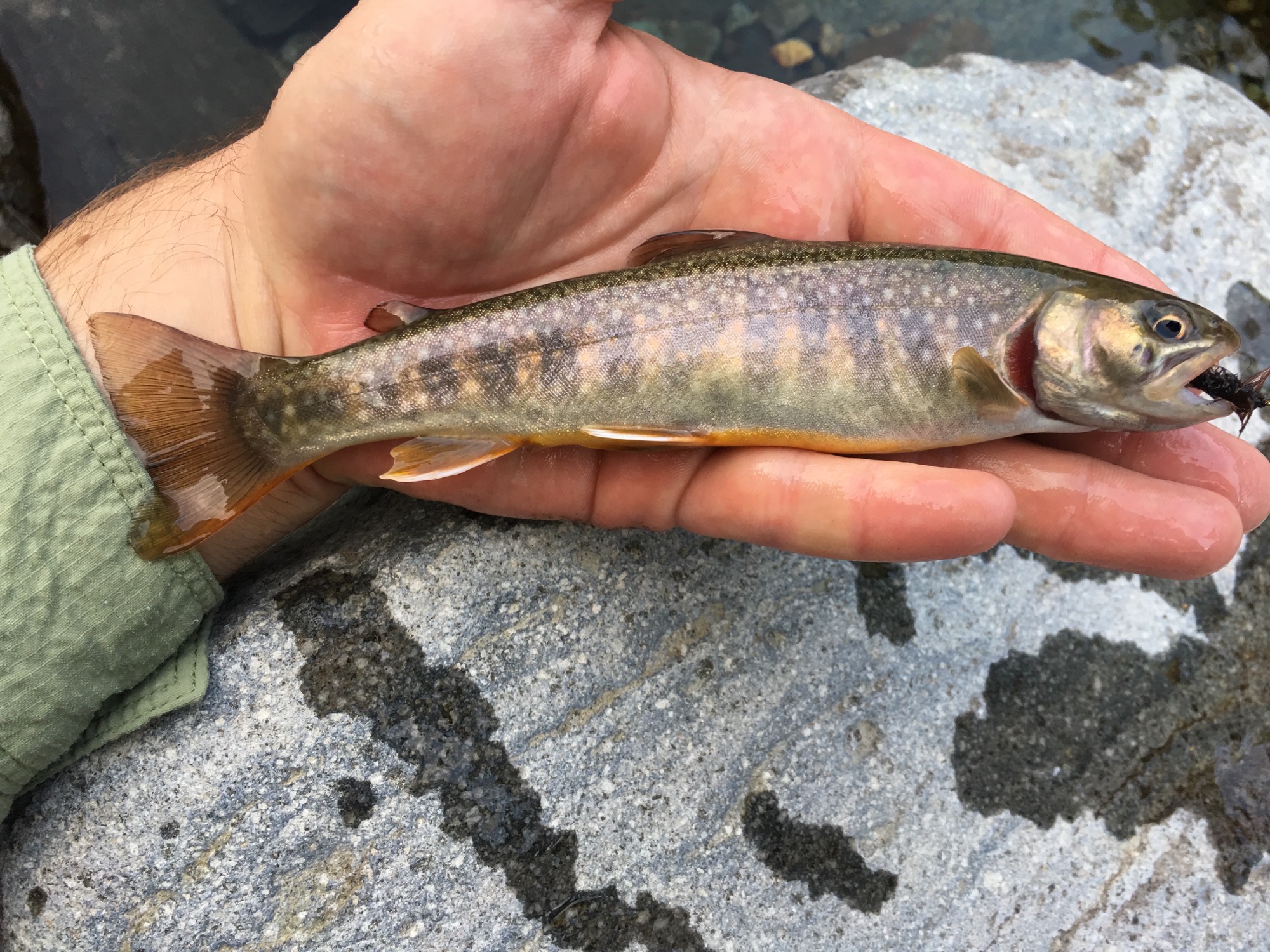 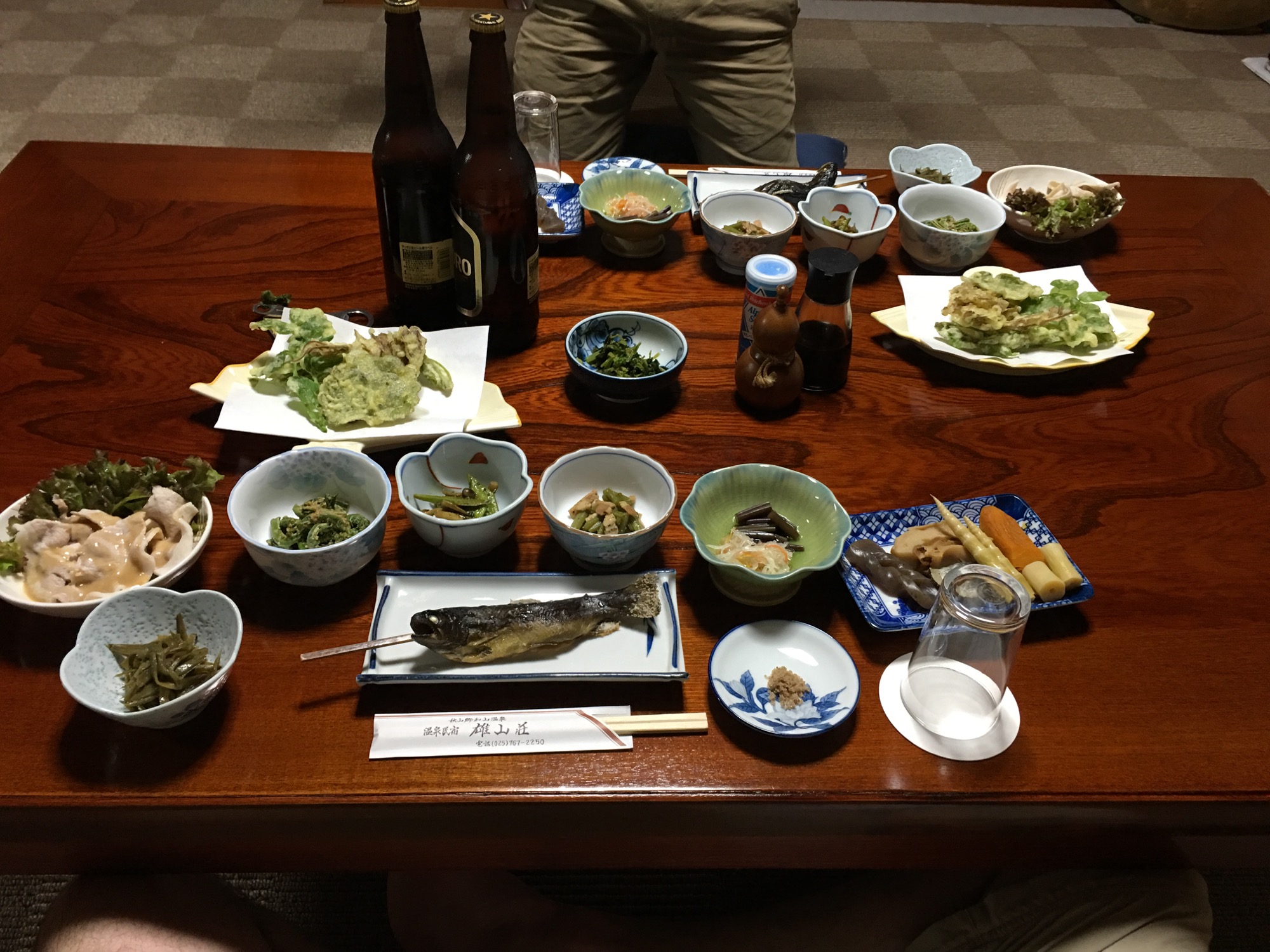 That night Hama and I stayed up very late talking with Yamada-san about Tenkara, Shokuryoshi, mountain rescue (of which he is a member of the local chapter), skiing Mt. Torikabuto, Iwana, the dam and how it destroyed the salmon migrations, showing off our various Tenkara rods, discussing how to make soba, and taxidermy. It was an enthralling conversation made possible by the generous and gracious translating by my friend Hama. That night I slept soundly while dreaming all night of Iwana and Torikabuto. 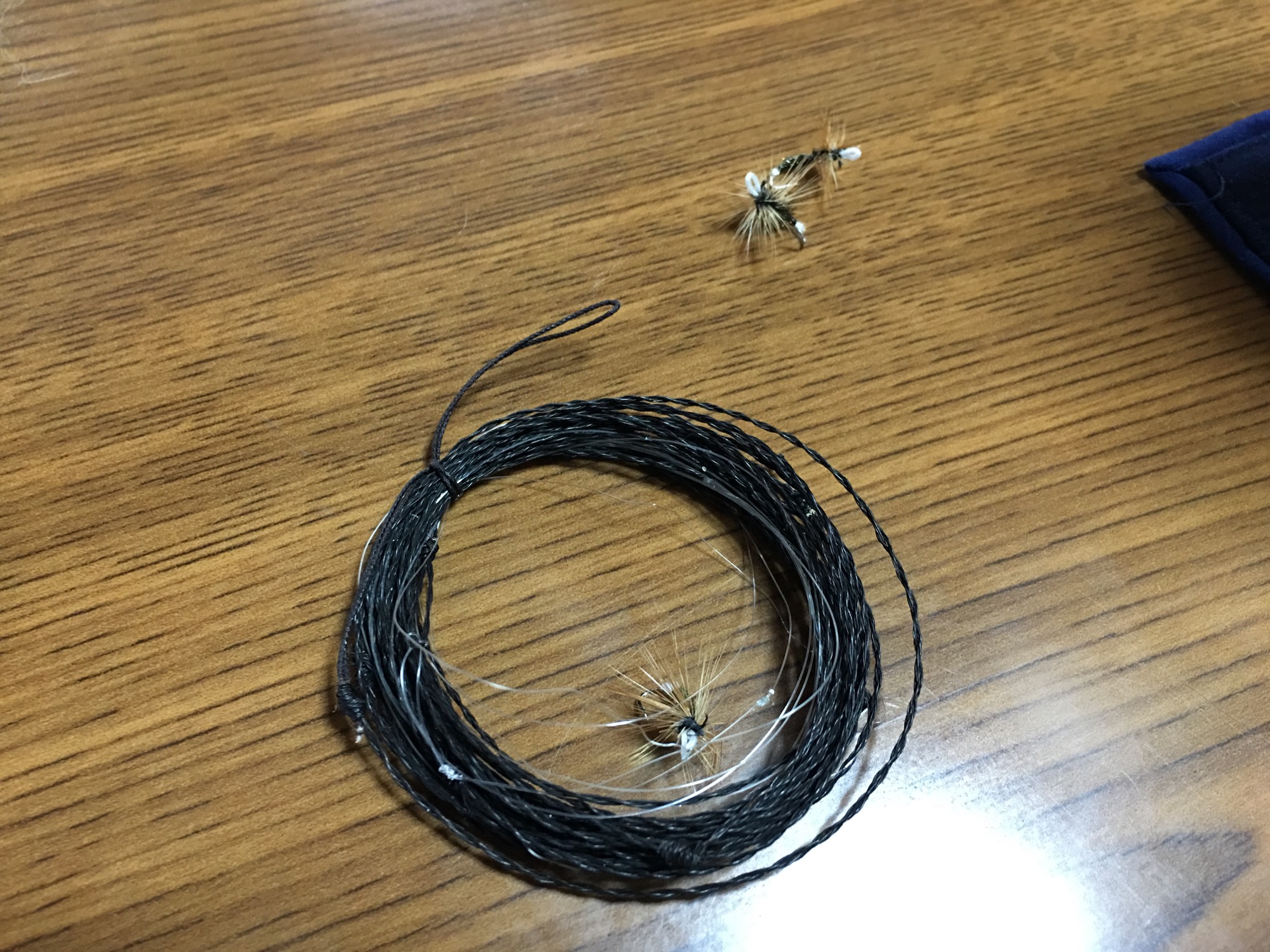 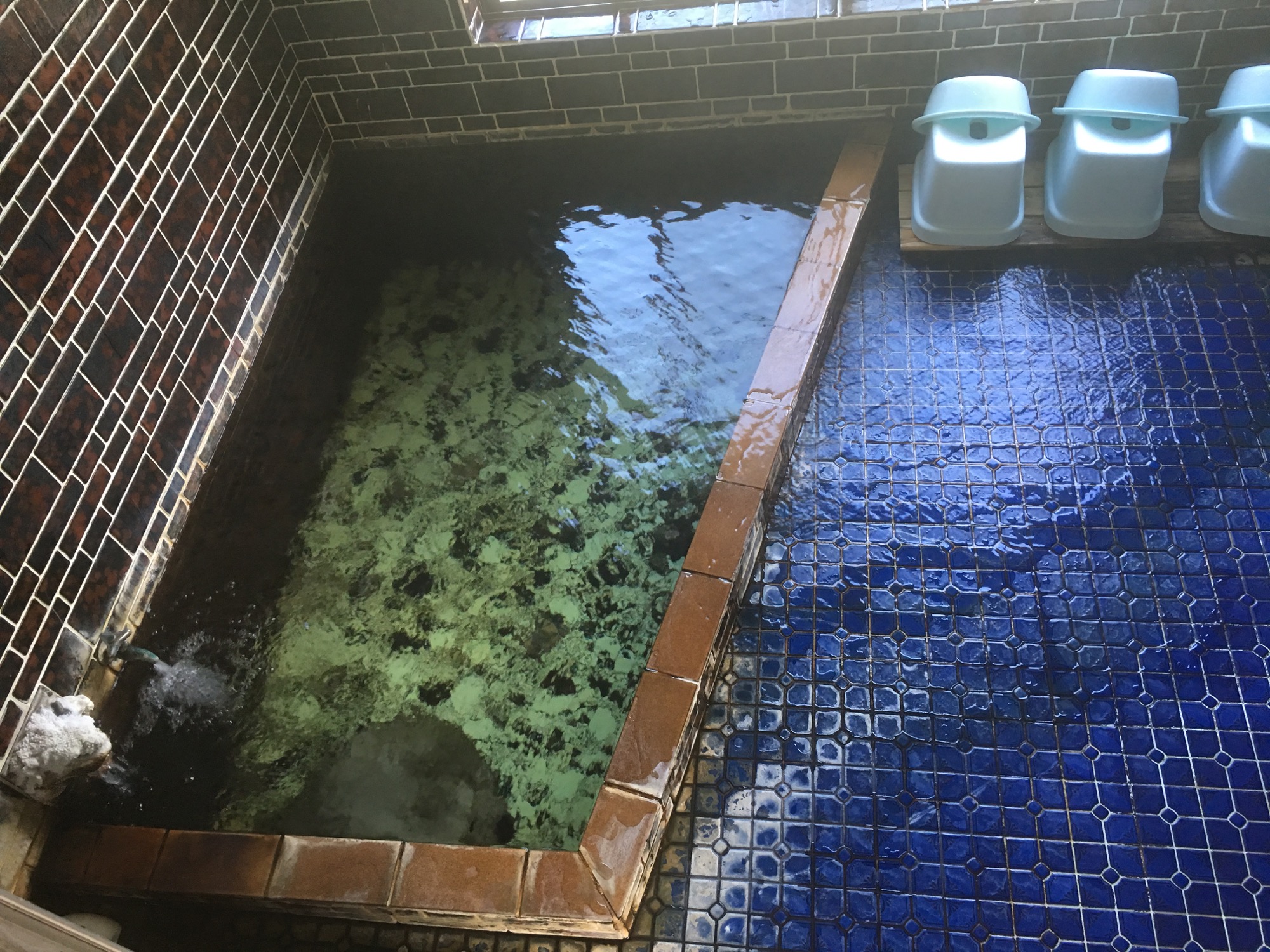 In the morning I was greeted by the most spectacular view of Mount Torikabuto from our bedroom window. 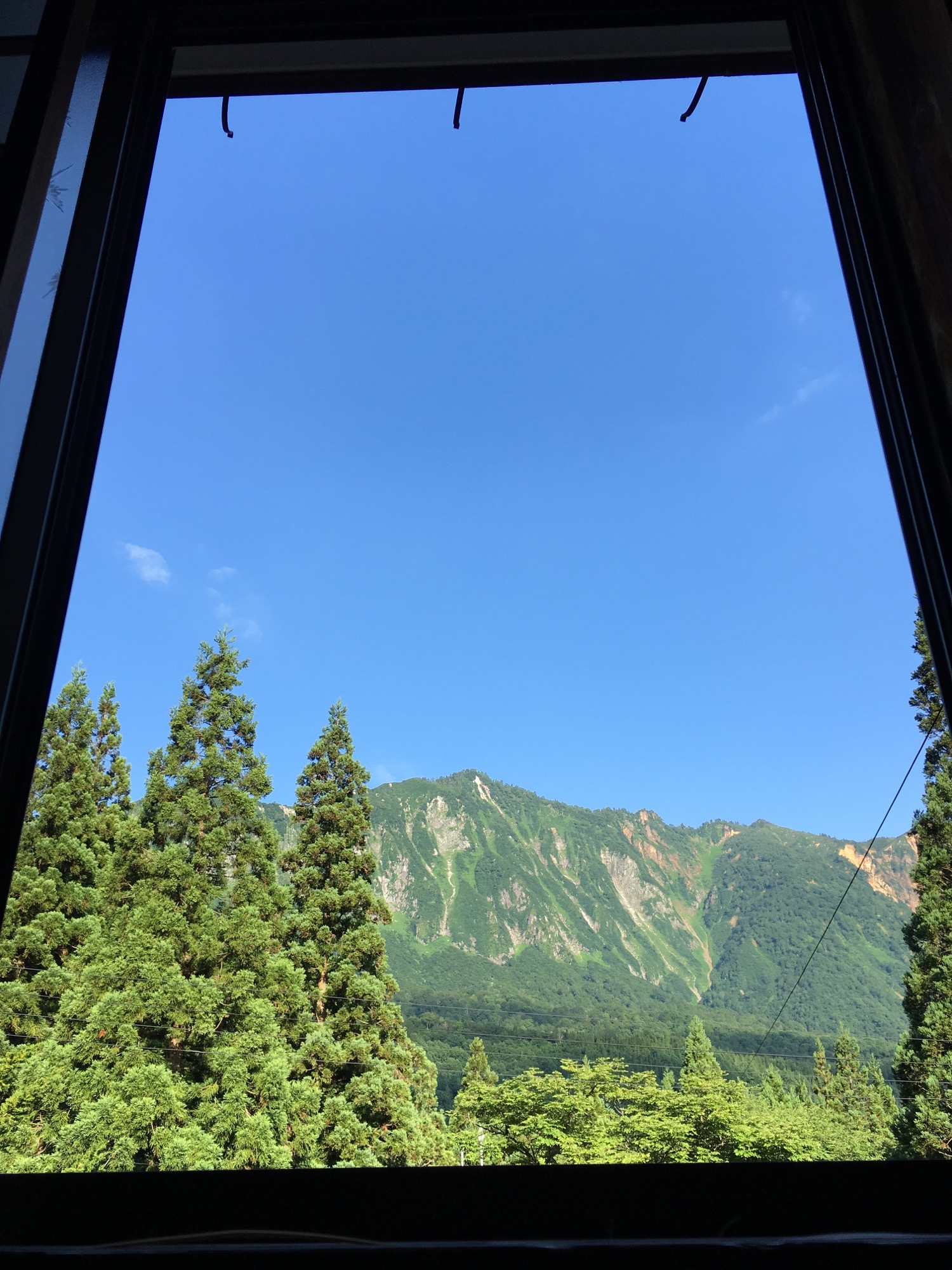 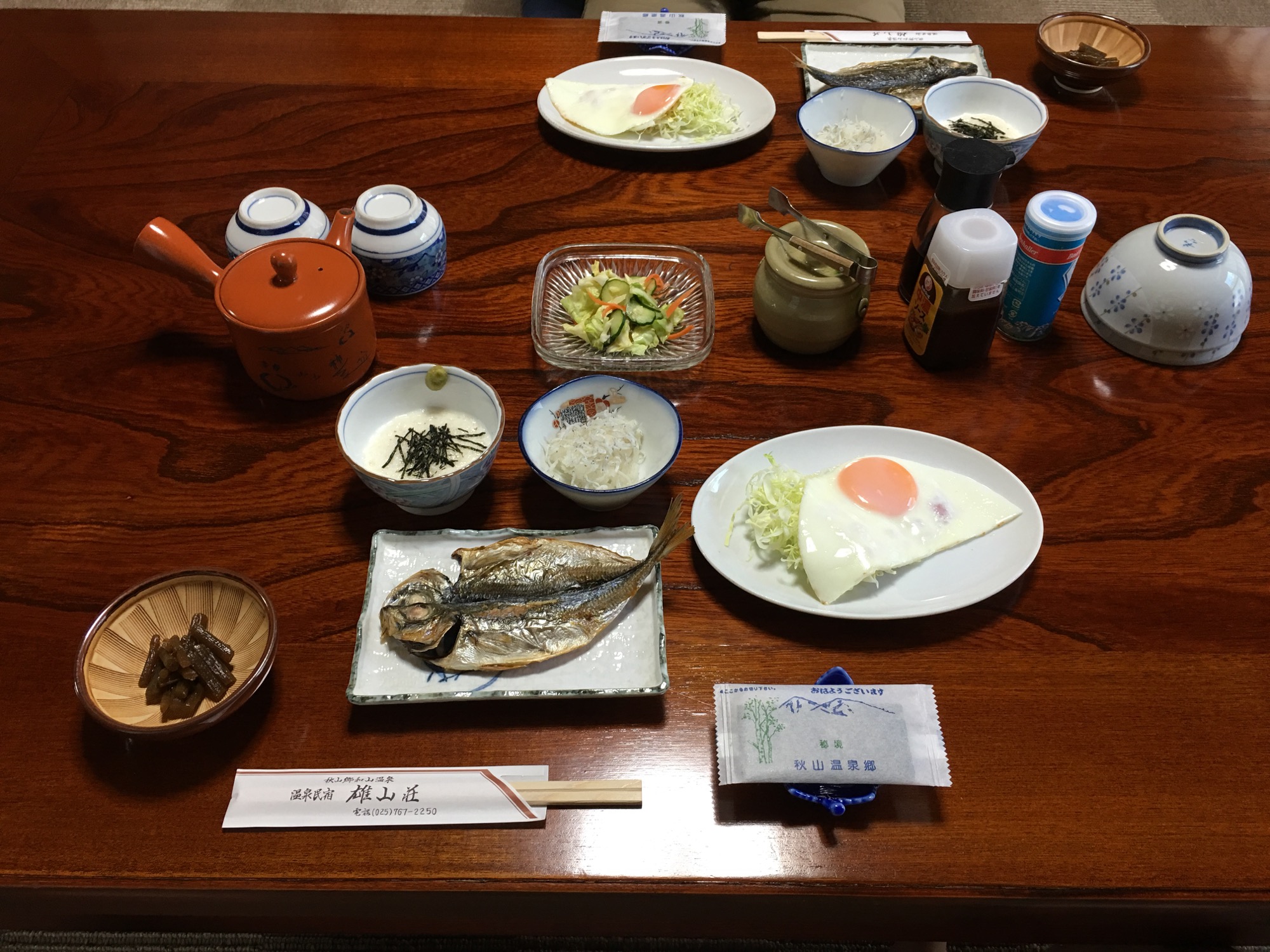 With such a pure and spectacular view I took it as a sign that it was going to be a great day of fishing. After a nice morning soak in the onsen and a delicious breakfast we reluctantly said goodbye to Yamada-san and his wife and drove to the trailhead. Our destination was a spot that Yamada-san had recommended we visit for our second day of fishing. 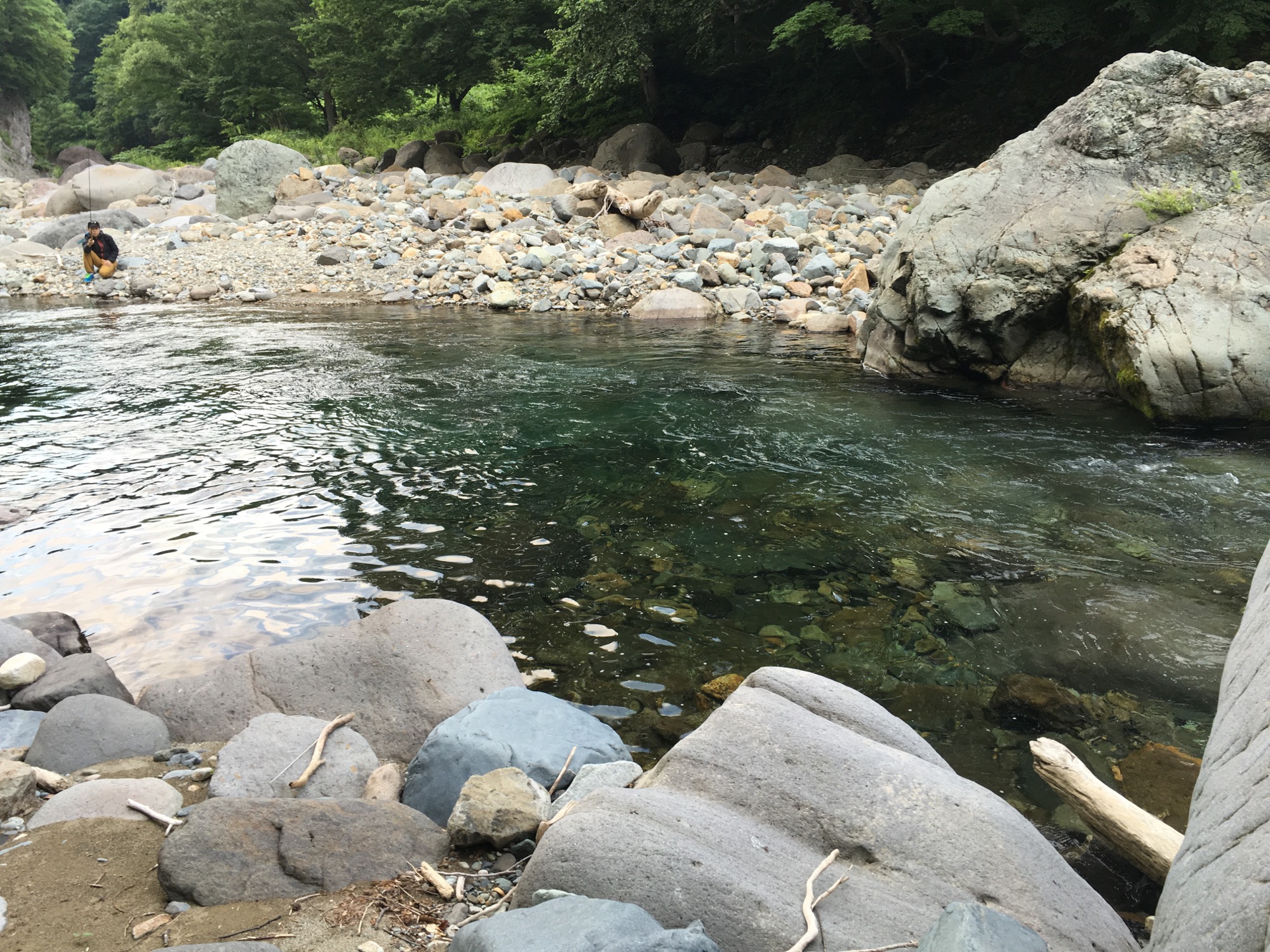 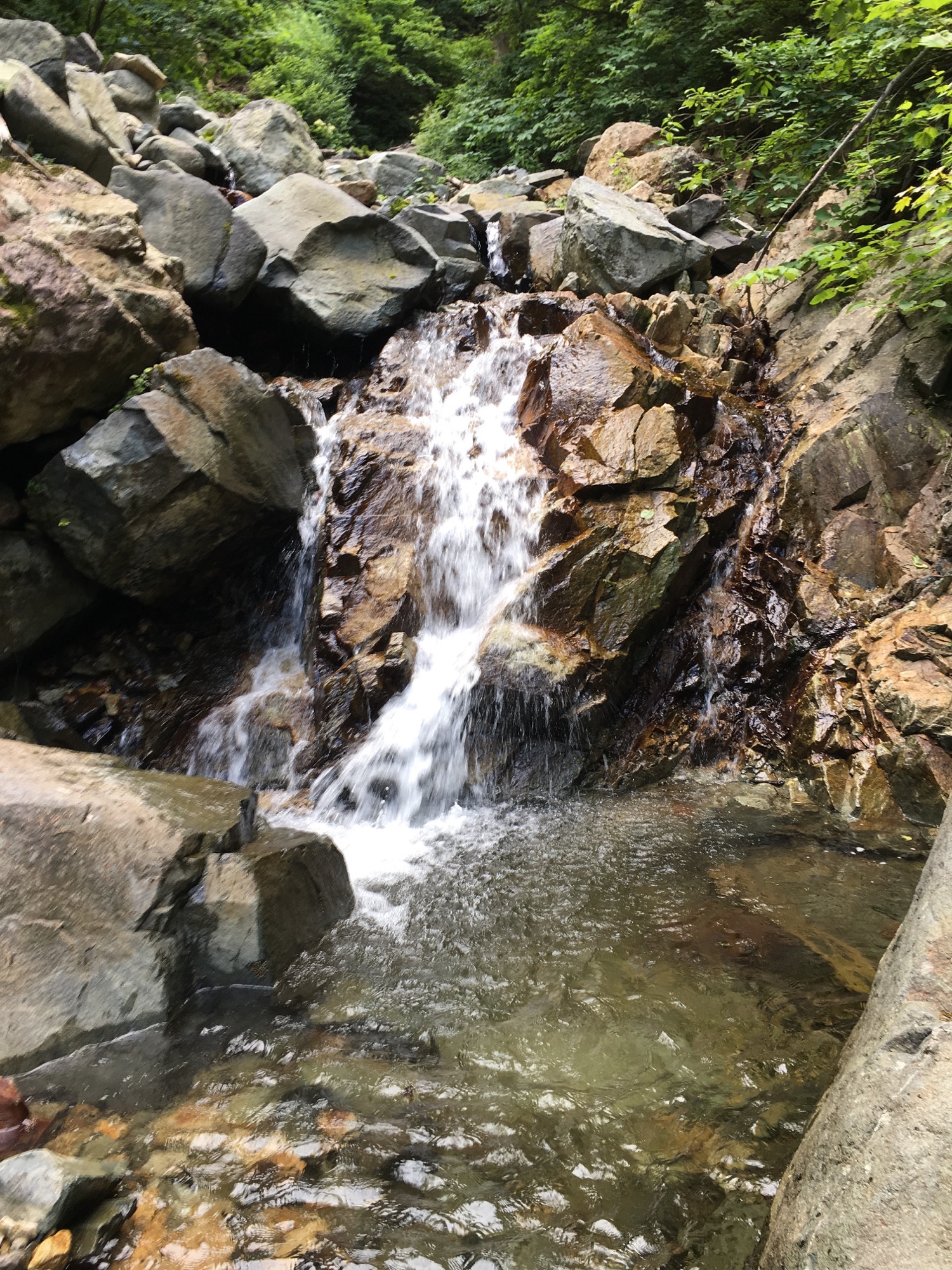 After a pleasant 30 minute walk through the forest the road became a trail and crossed the river via a rusty suspension bridge. This is where Yamada-san told us we should start fishing. 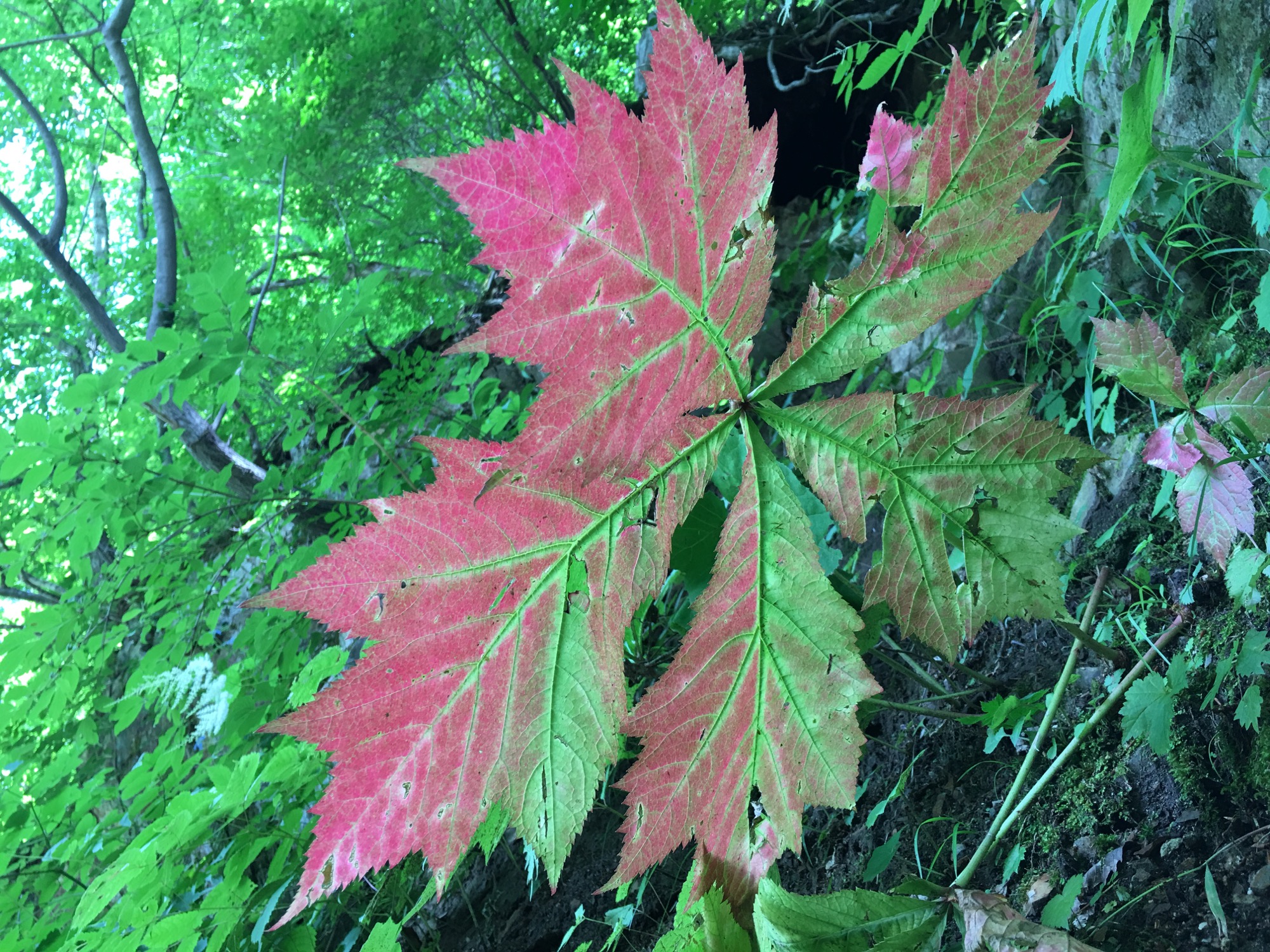 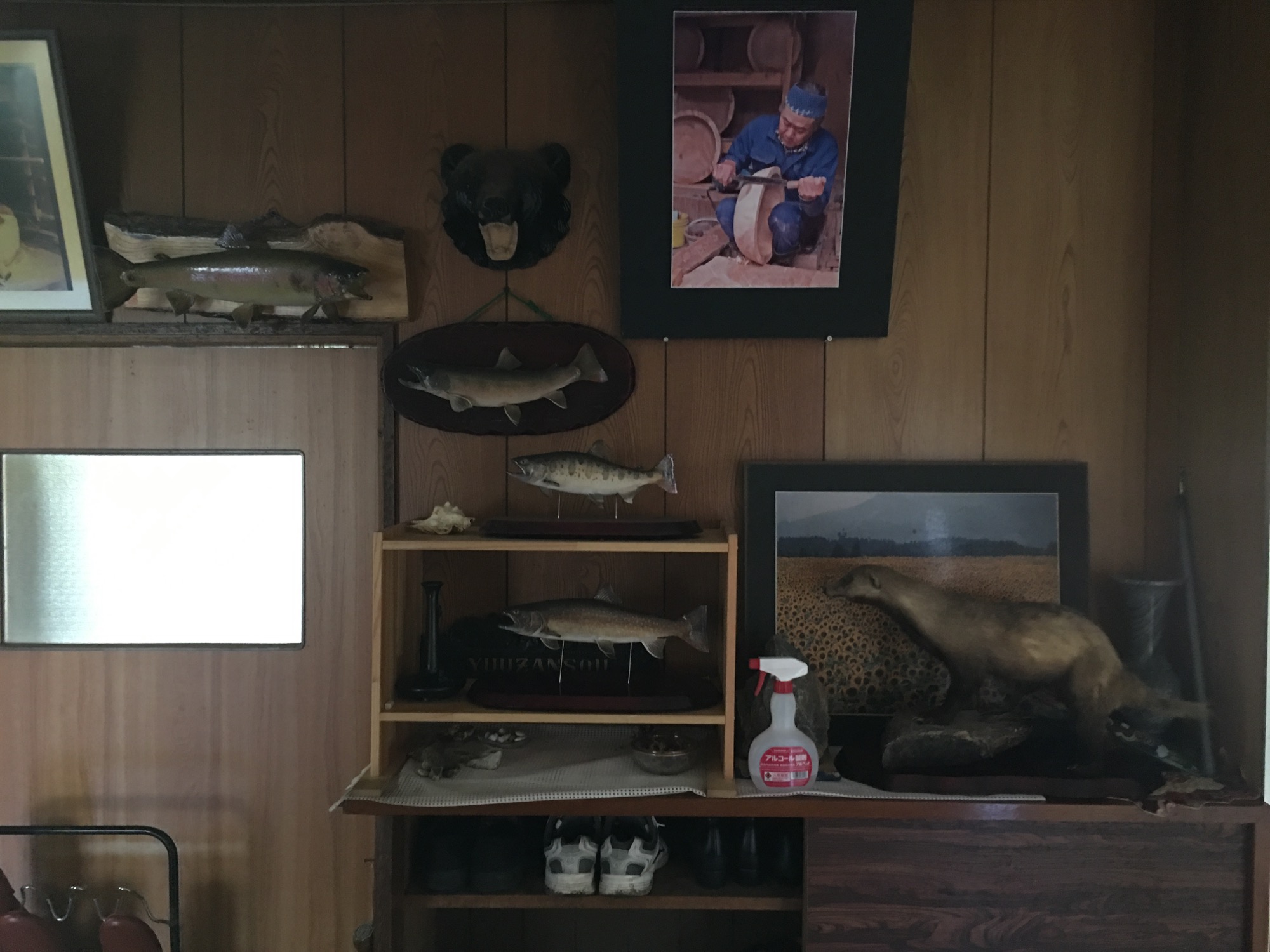 For the first hour or so I did not see any fish. Then while I was wading in a pool, up to my waist in cool water, and pressed against the side of the cliff I dead drifted my fly through a patch of froth when a massive Iwana came up out of the depths mouth gaping to consume my fly. I held my breath and as her mouth closed around my fly I set the hook and.... pulled it straight out of her mouth! She darted away and would not come out despite my best efforts to coax her out for a second shot. It did not matter though, as I caught a striking Iwana in the next pool and several other ones too as I continued upstream. 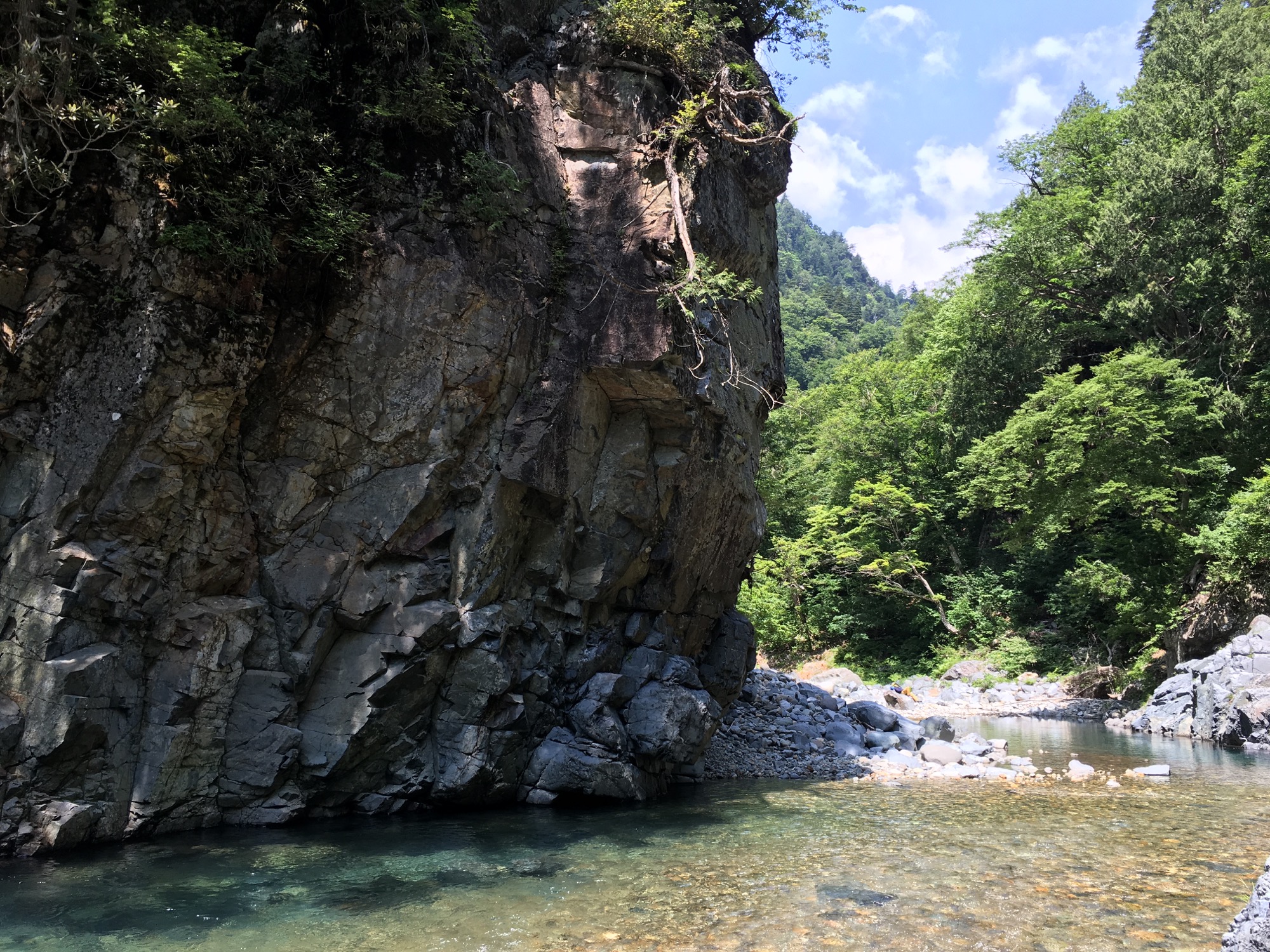 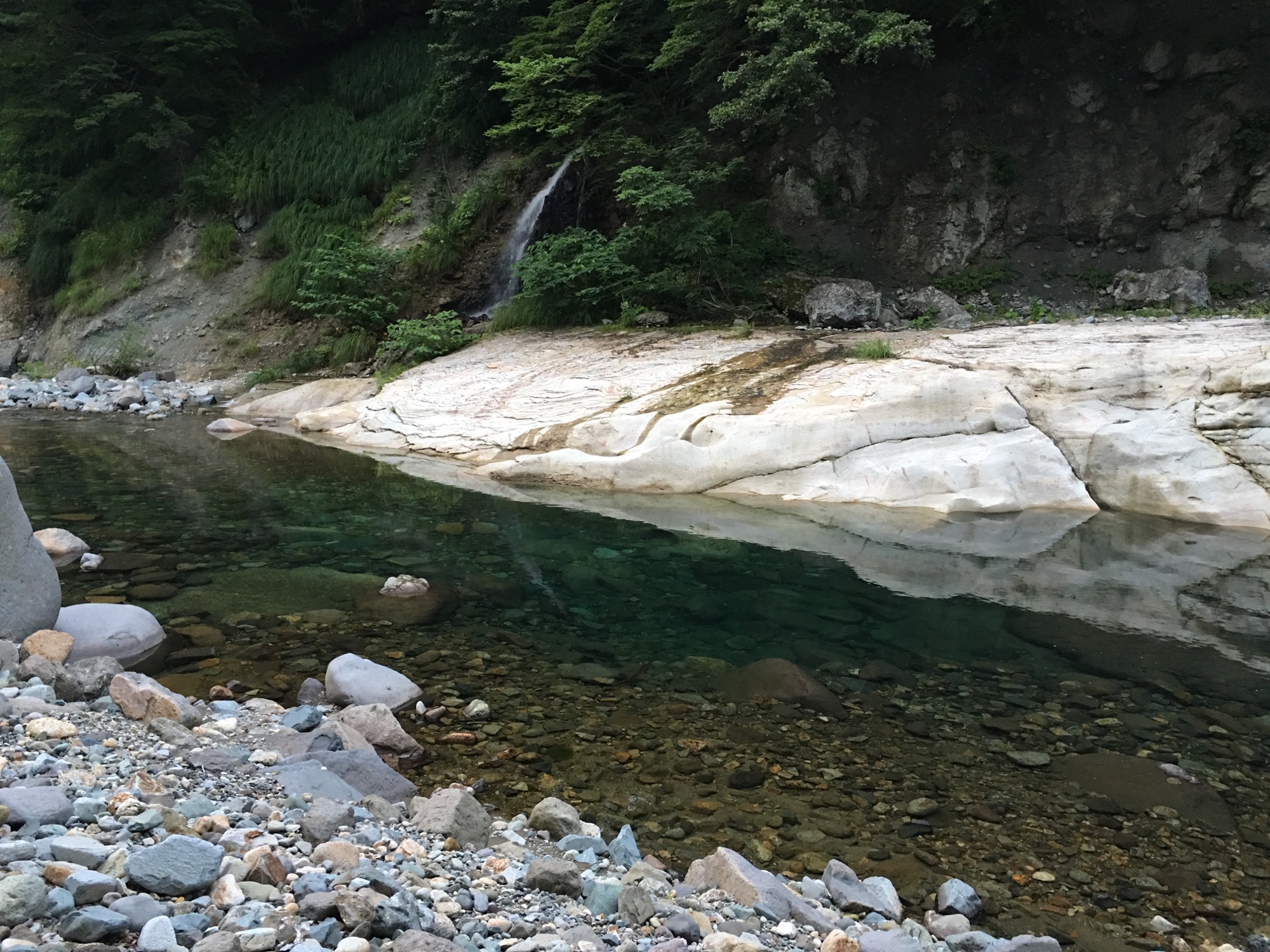 I fished for several hours, while my friend chose to sun and nap on a comfortable boulder. In the afternoon when the fish hunkered down until the evening, and the fishing action slowed down we swam, cliff jumped, soaked in the warm sun, and dined on the plum onigiri that Yamada-san's wife had made for us that morning. It was the perfect end to a great trip. 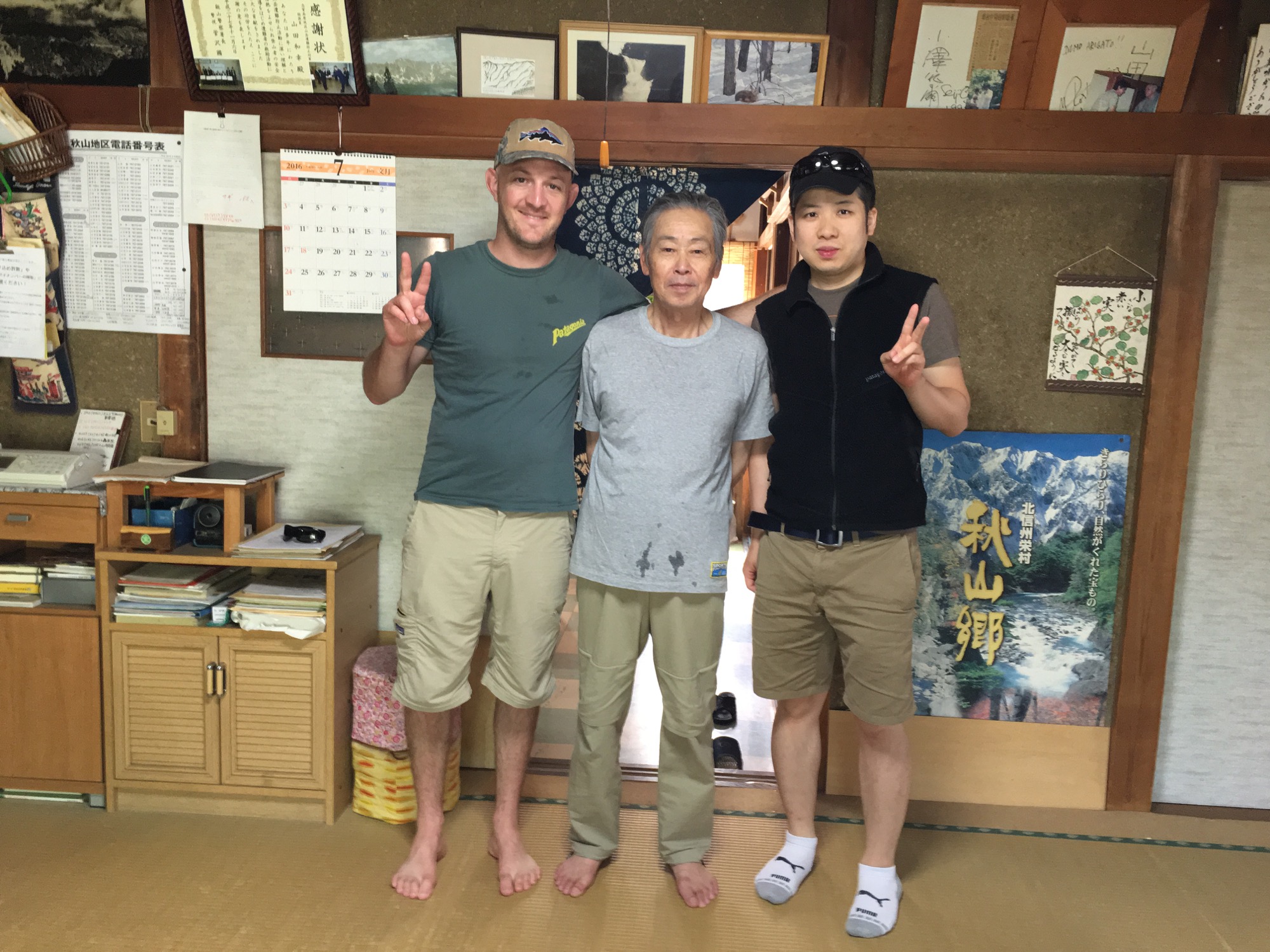 Authors Note: If you are planning a visit to Japan and would like to stay at Yamada-san's minshuku the best time to visit is mid-May through mid-June. He understands English but does not speak it, so you will need a translator. The cost is ¥7500 per night which includes breakfast and dinner (and lunch too after the first night if you ask). Yamada-san has a wealth of knowledge about Tenkara and is happy to share it. There is a bus that runs every two hours up the valley from Tsunan. 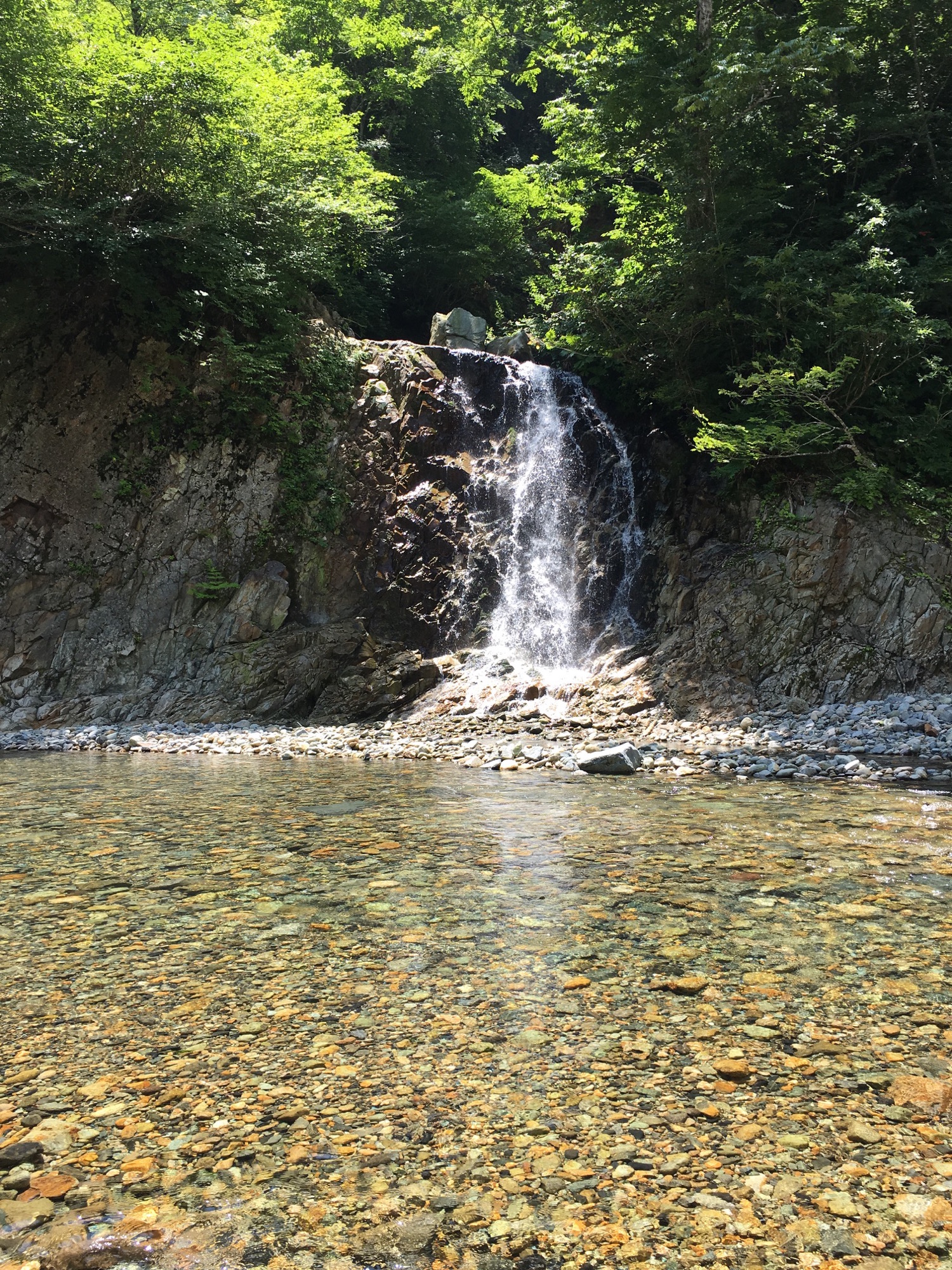