Herabuna are a sub-species of Carp that are a very popular game fish in Japan. The style of fishing for Herabuna is the antithesis of Tenkara. While both utilize a fixed line fishing method with rods that breakdown or collapse that is about where the similarities end. Herabuna fishing utilizes bait, is primarily catch and release (due to the taste of the fish), and requires hours of patiently sitting (literally) in one spot. Herabuna rods come in all lengths and cover the full gambit of the flex scale. The stiffer Herabuna rods are similar to a softish Tenkara rod. Some Japanese websites that I have visited even suggest that Herabuna rods can be used to catch all manner of fish with both bait and flies. This is an interesting hypothesis that I would like to explore more of. I am a now a huge fan of bamboo rods - and not just for their aesthetics but their ability to translate even the smallest bites into very perceptible tremors at the handle. A fact that I came to discover during my recent haze fishing trip where we were catching fish no bigger than 7.5cm. 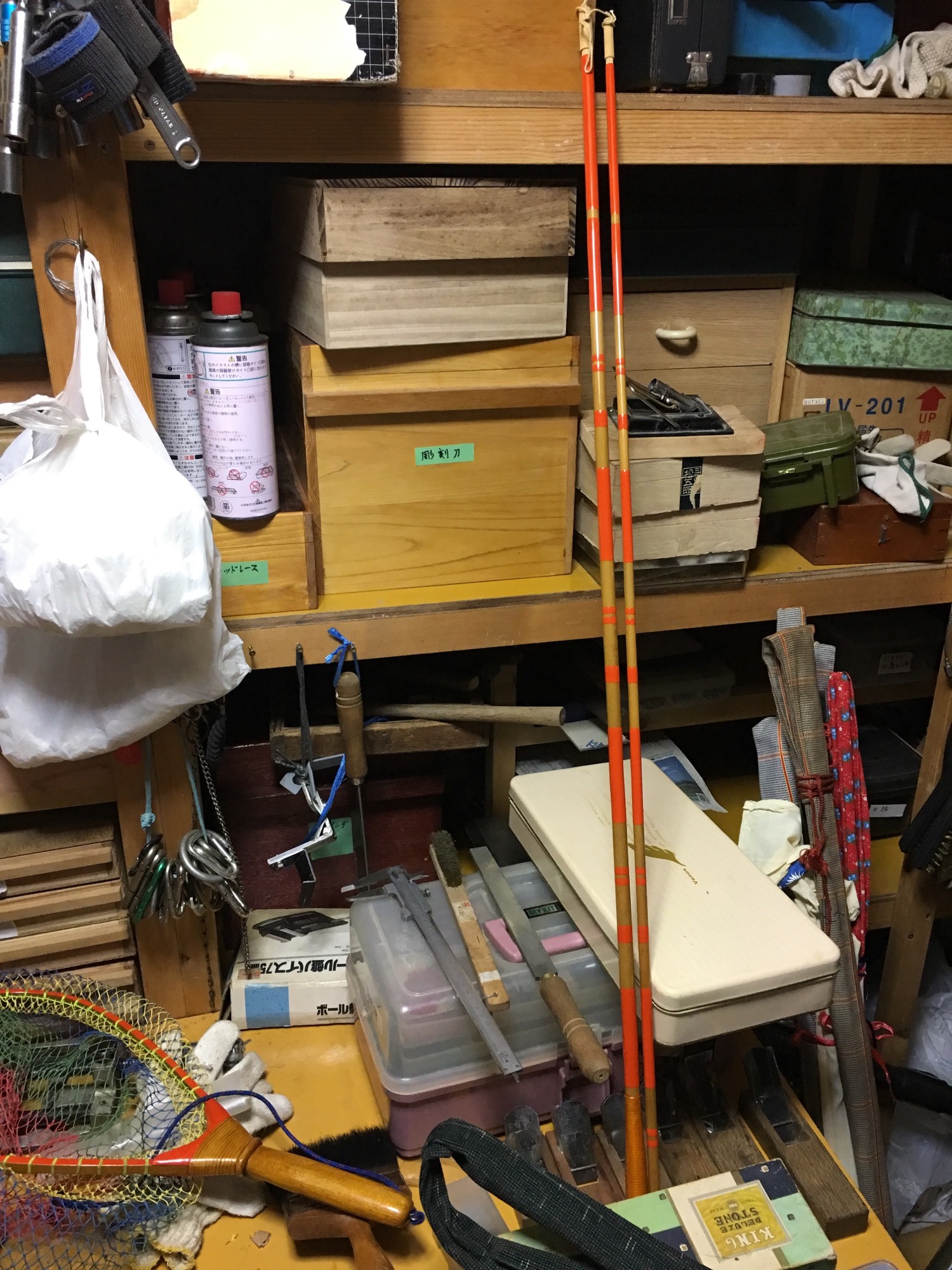 A few months ago I met with Adam-san and Adam-chan as well as a large group of Tenkara anglers in the Aizu region of Fukushima Prefecture (if you have not read my trip report please check it out here). During that trip I got to know a lot of big names in the Japanese Tenkara community, one of which is Yamano-san. Yamano-san makes beautiful bamboo fishing rods. While I was in Aizu Yamano-san offered to teach me the art of Edo-Wazao and so next month I will start studying under his tutelage the art of making bamboo fishing rods. 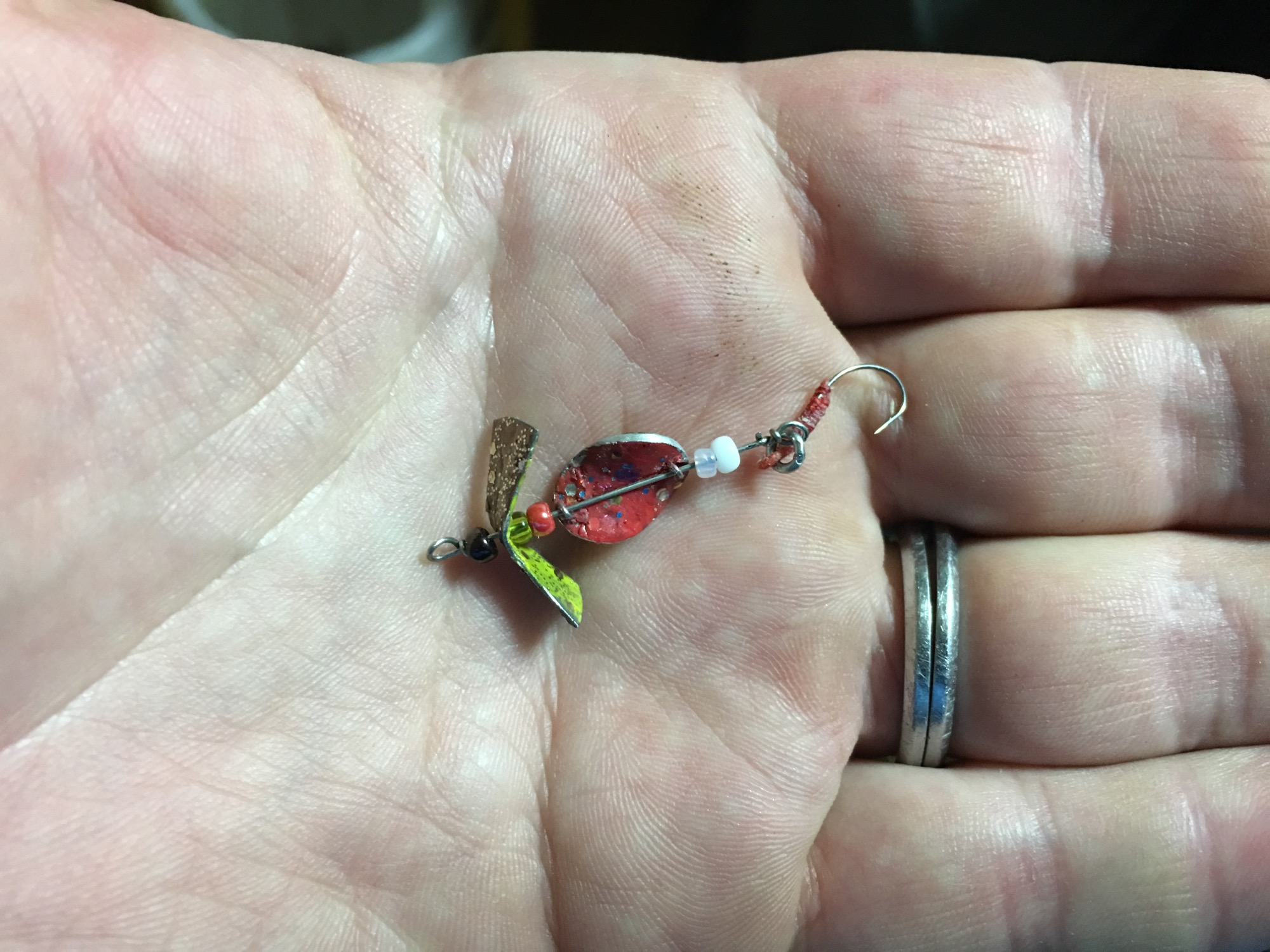 Needless to say I was very excited when my friend Kado-san offered to introduce me to Hajime Murai (竿姫) a Herabuna bamboo rod maker living in Atami. Atami is located on the Sagami Bay side of Izu Peninsula very close to where we had spent three days camping and Tenkara fishing on the peninsula. So, it was very convenient to stop in and visit Murai-san's shop/residence on the way home. Not to mention I was eager to learn more about Edo-Wazao. 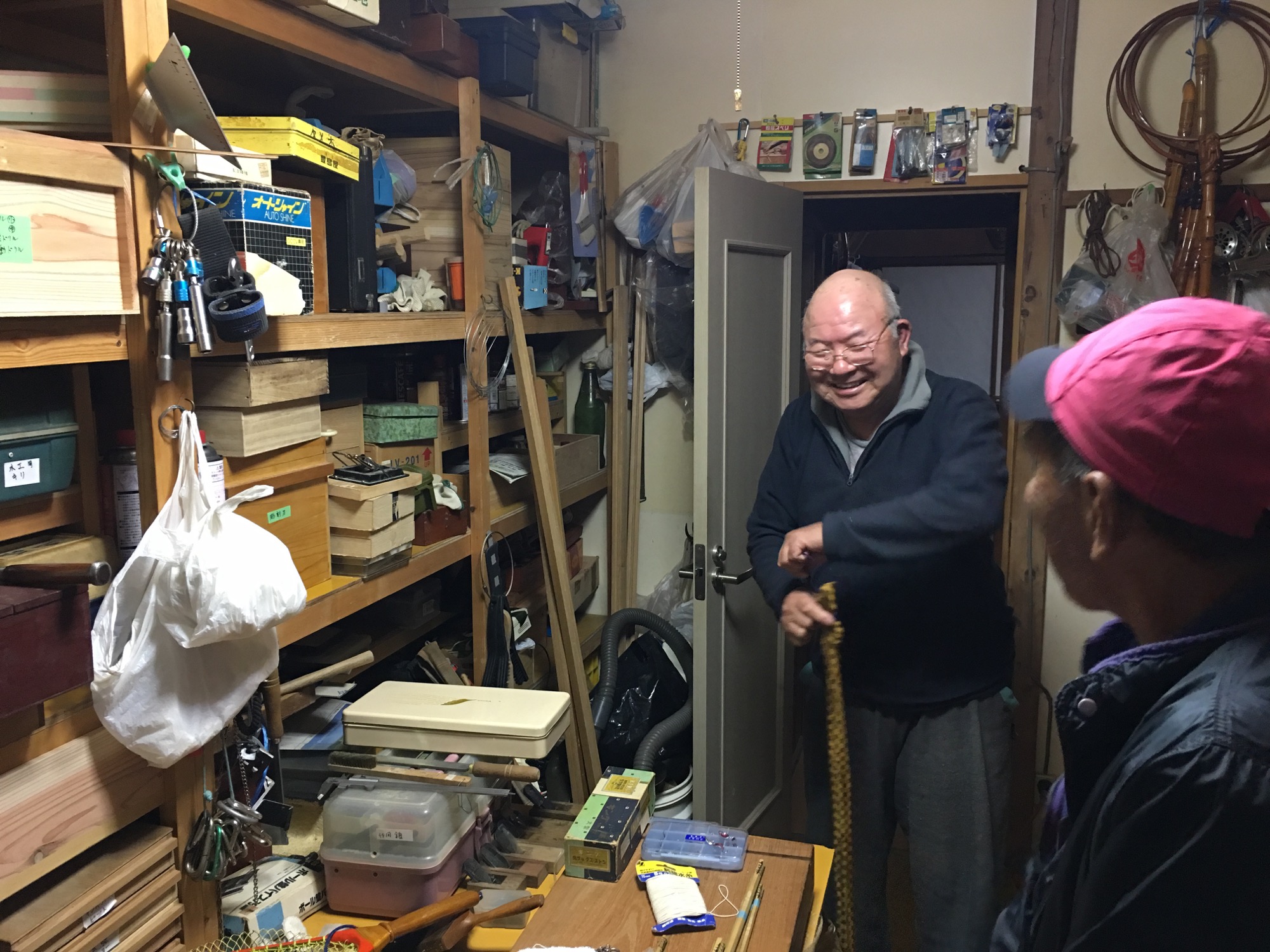 We spent several hours chatting and discussing all manner of subjects. Hajime Murai (竿姫) has an impressive collection of hand tied flies as well as hand carved lures. In fact he was heavily promoting fishing with one of his wooden lures and a fly attached together. Murai-san is an avid western fly fisherman (aka with a reel) and likes to use both a lure and a fly when he fishes. It is a technique he swears by. 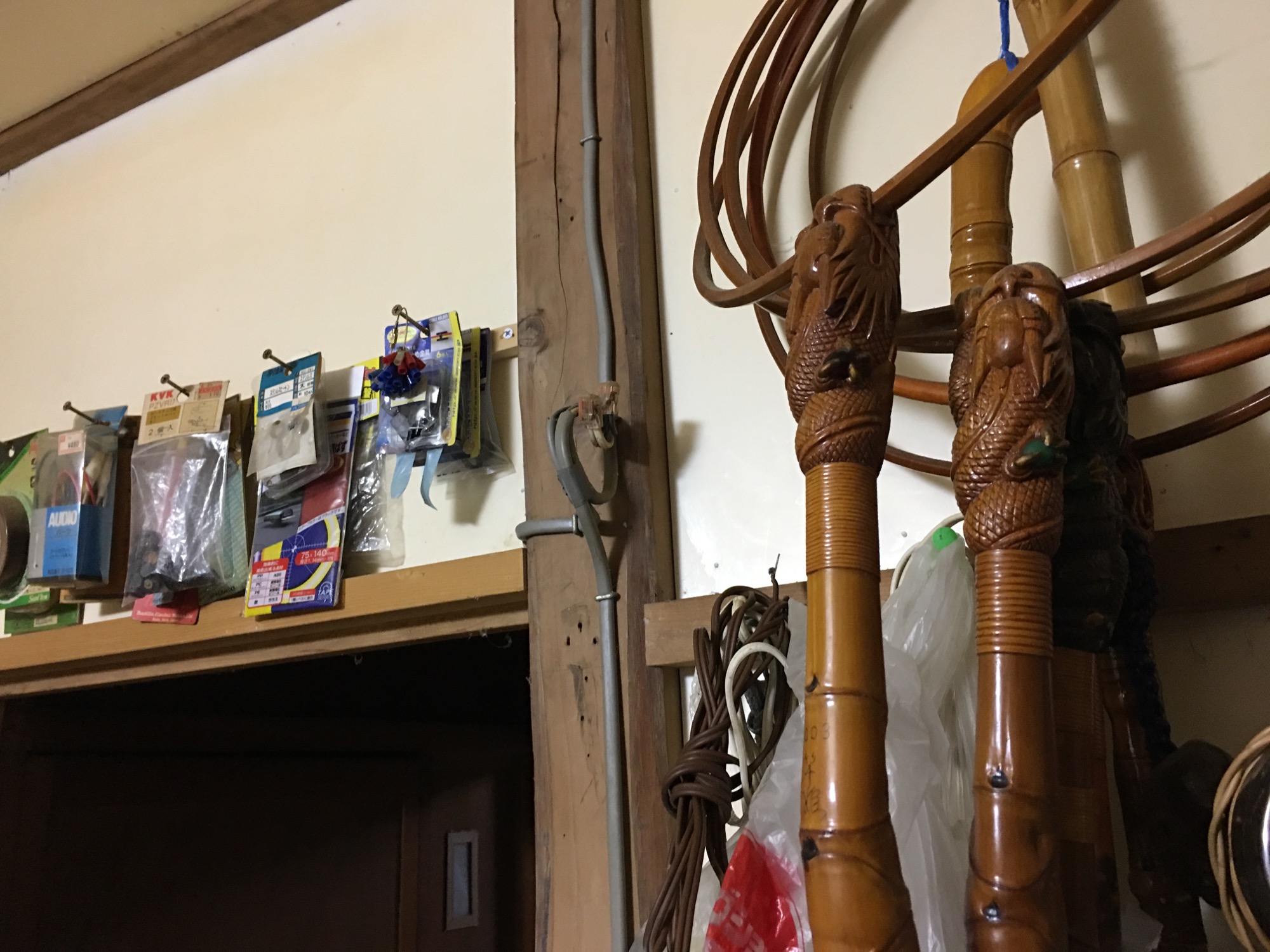 While we were chatting Murai-san and Kado-san were pulling hundreds of bamboo fishing rods out of storage and going through them one by one. When I asked Kado-san what they were looking for he told me that Murai-san wanted to give me a rod that was stiff enough to be used as a Tenkara rod! I was very honored and a little taken aback by such a generous gift (not to mention he had already given me a bamboo Tamo. It was not finished though so he told me to come back in the spring and he would have it finished for me). I ended up leaving that evening with two Herabuna bamboo fishing rods that Murai-san had made in 1980!! 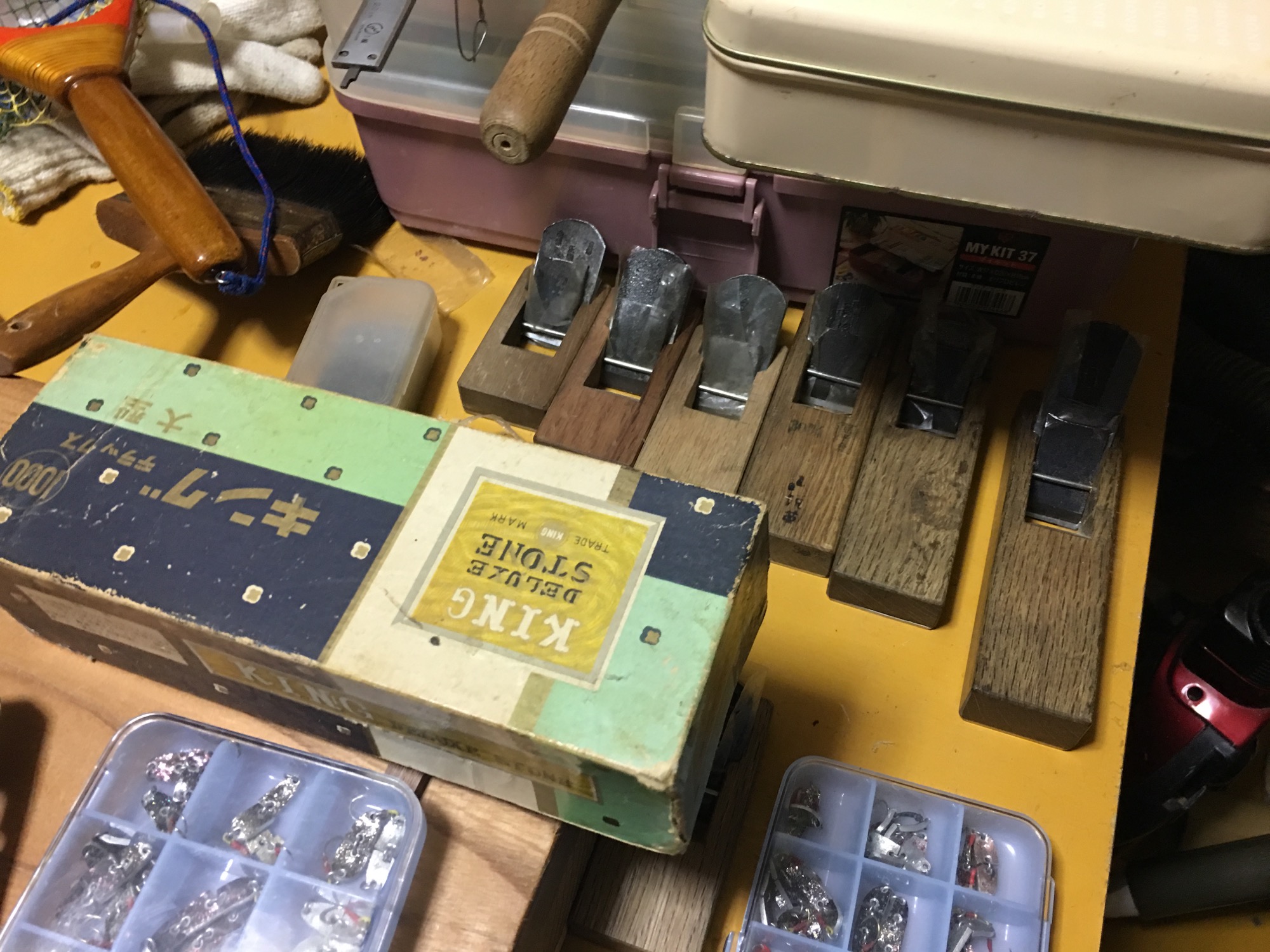