Last week the weather was pretty nasty. Tropical Storm Haishen pushed high winds, lots of rain, and even a little bit of sleet/snow towards Miura Peninsula Japan! I took advantage of the down time to tie some flies and do some work on the backend of this site. While it was a productive week I did not move to Japan to sit behind a computer. I was itching to get out into the mountains. With a week of beautiful weather in the forecast I pieced together an epic Tenkara trip that would include the Doshi River, Shikatome River, Narago River, Tama River, Otsunakidani River, Yanagisawa River, Otsunakidani River, and finally the Otaba River. It was going to be an epic three day Tenkara adventure. 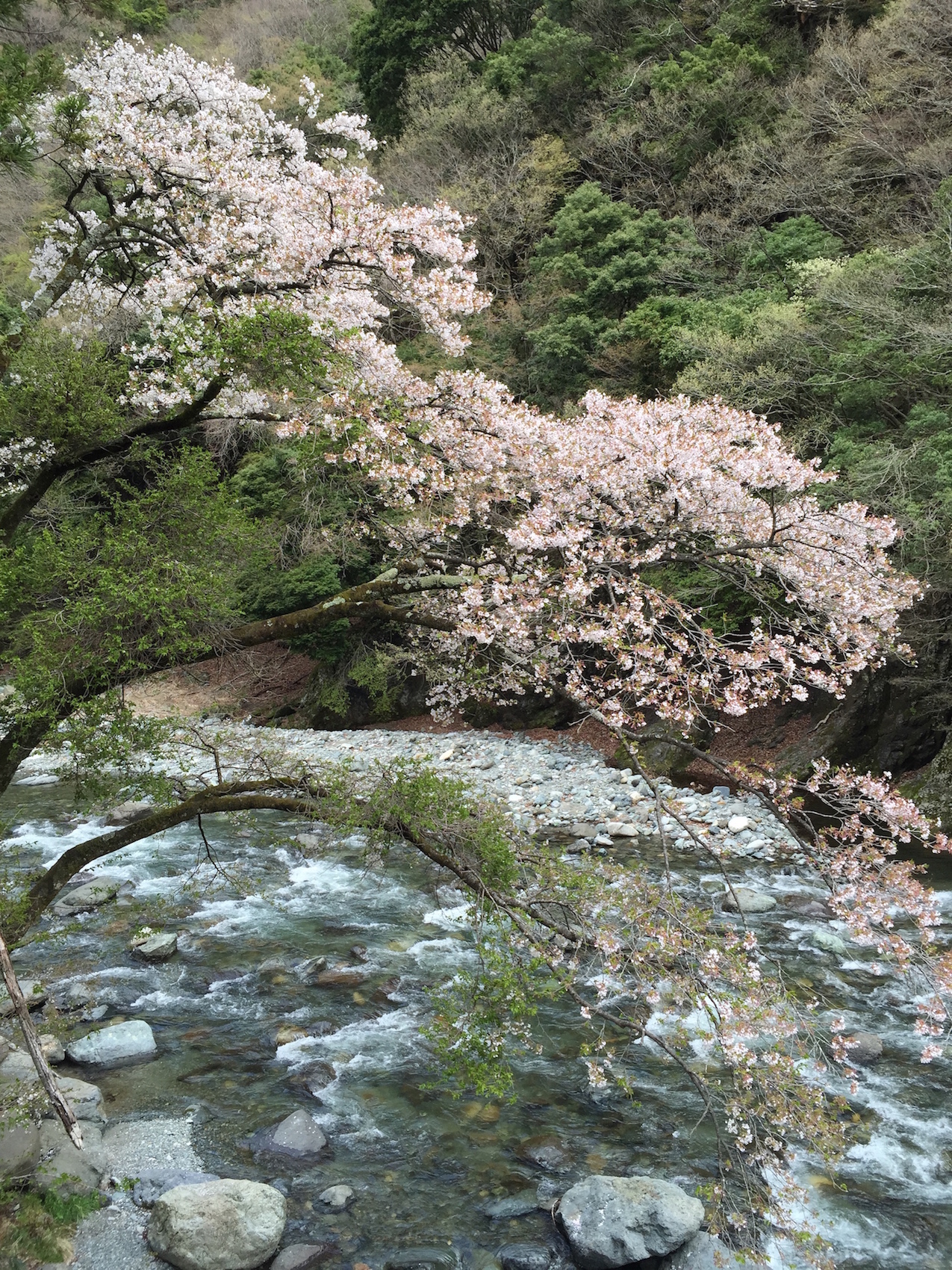 We got on the road early to beat the morning rush hour traffic. Our early departure was a good call and it only took us two hours to get to the small village of Omurozasu 大室指. Omurozasu is located right on the beautiful Doshi River. It is hard to believe that Tokyo, the largest city in the world, is less than 50 miles away. There was only one other angler on the river when we arrived. He was very friendly and his English was better than mine. He had spent several years in Portland learning how to fly-fish and had fished many of the same rivers as my friend Cameron, so needless to say we hit it off. He showed us around and helped us get our fishing ticket. For a day of fishing on the Doshi River it only cost us ¥1,000.00 each! 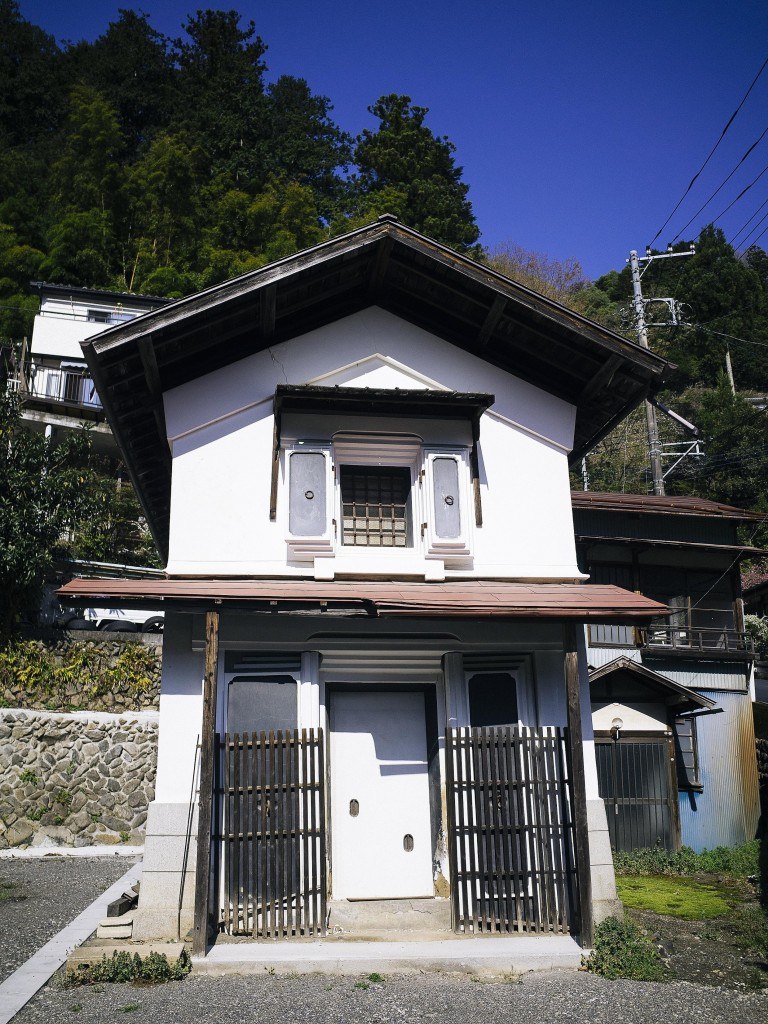 I would describe the Doshi River as medium sized river with lots of structure. There are numerous deep pools, mid river boulders, and various other prime fish habitat. To top it off there is a waterfall that is several hundred feet tall that plunges into the Doshi River right above Omurozasu. It is truly a beautiful spot! 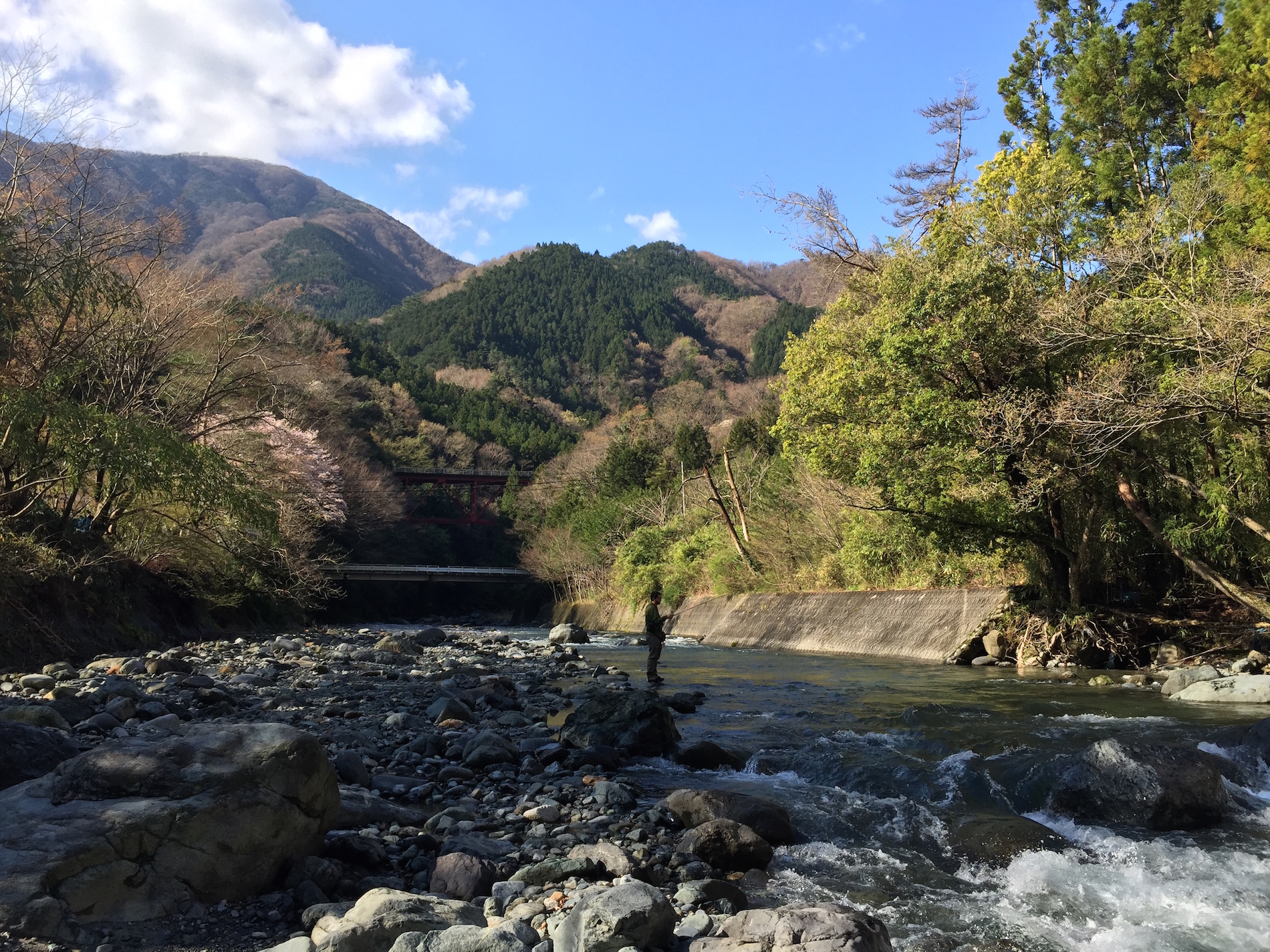 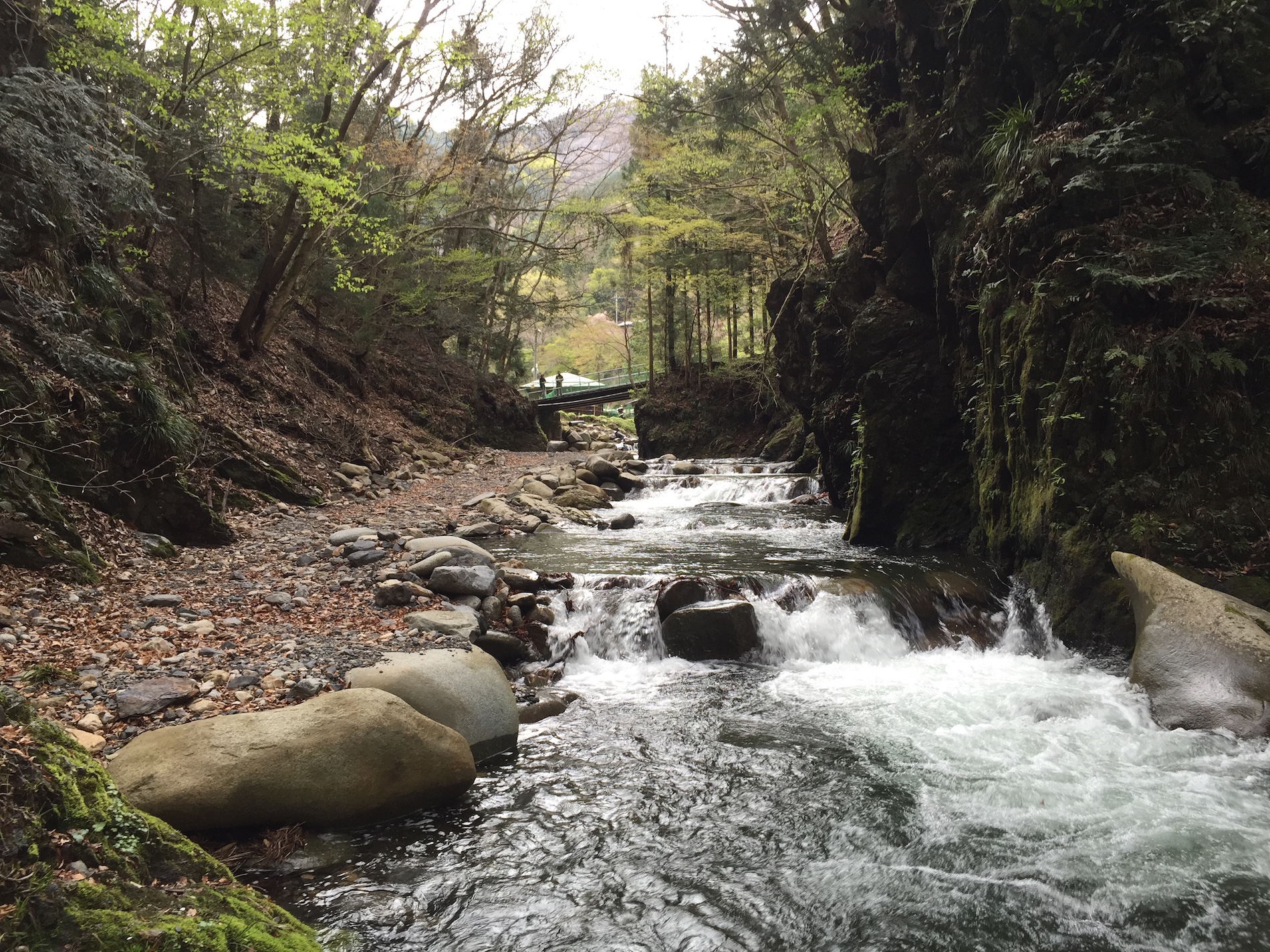 After five hours of fishing on the Doshi River we pushed on up the 413 towards the small village of Higashikanji 東神地. There is a nice managed fishing operation that we wanted to check out. Unfortunately the owners car was parked out front but he was nowhere to be found. It was a Wednesday afternoon, he was probably out fishing :) It costs ¥3900 for a day of fishing and there are numerous deep man-made pool or you can opt to fish the more natural section of river. It is stocked so you are pretty much guaranteed to catch a lot of fish. 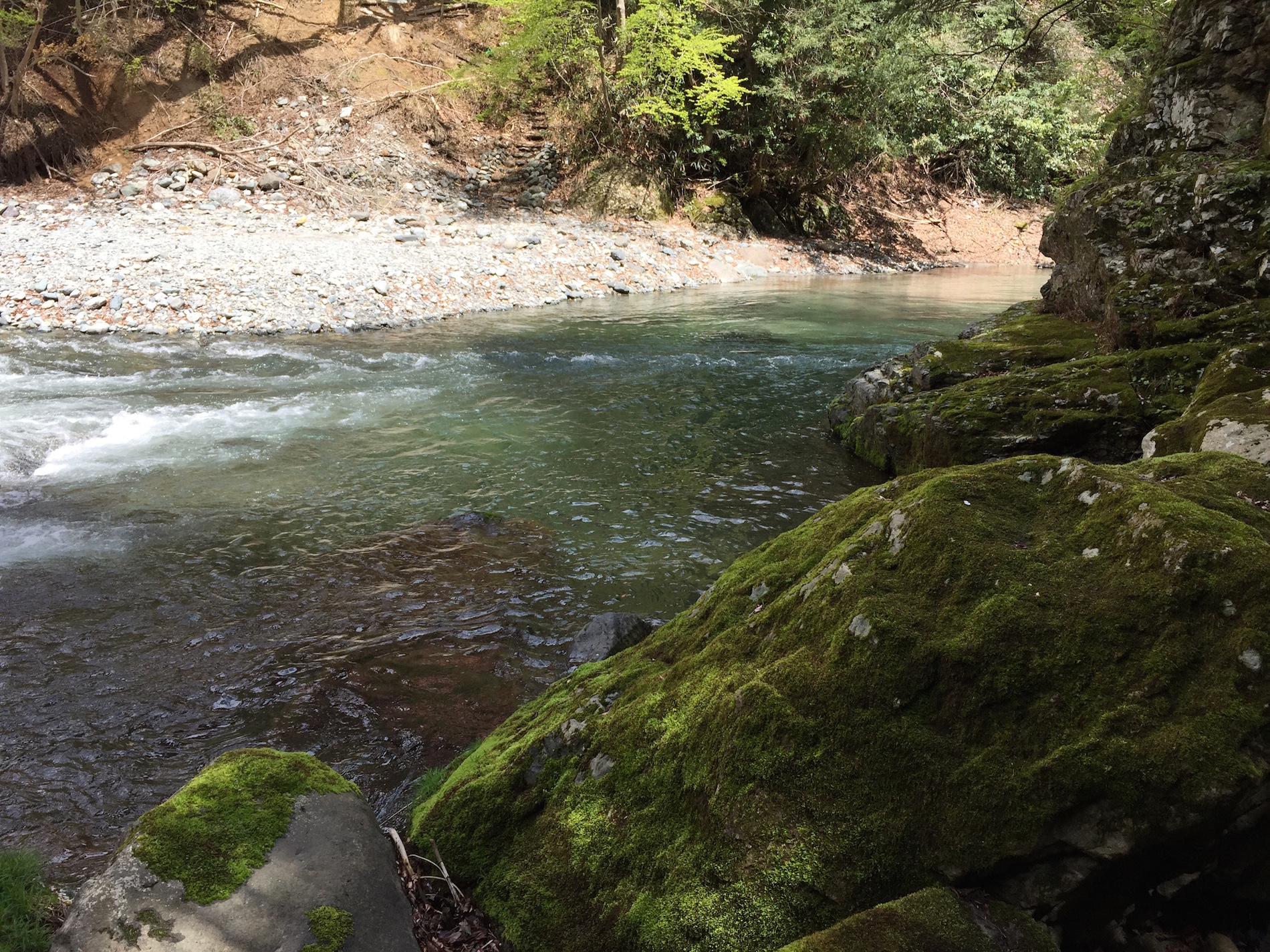 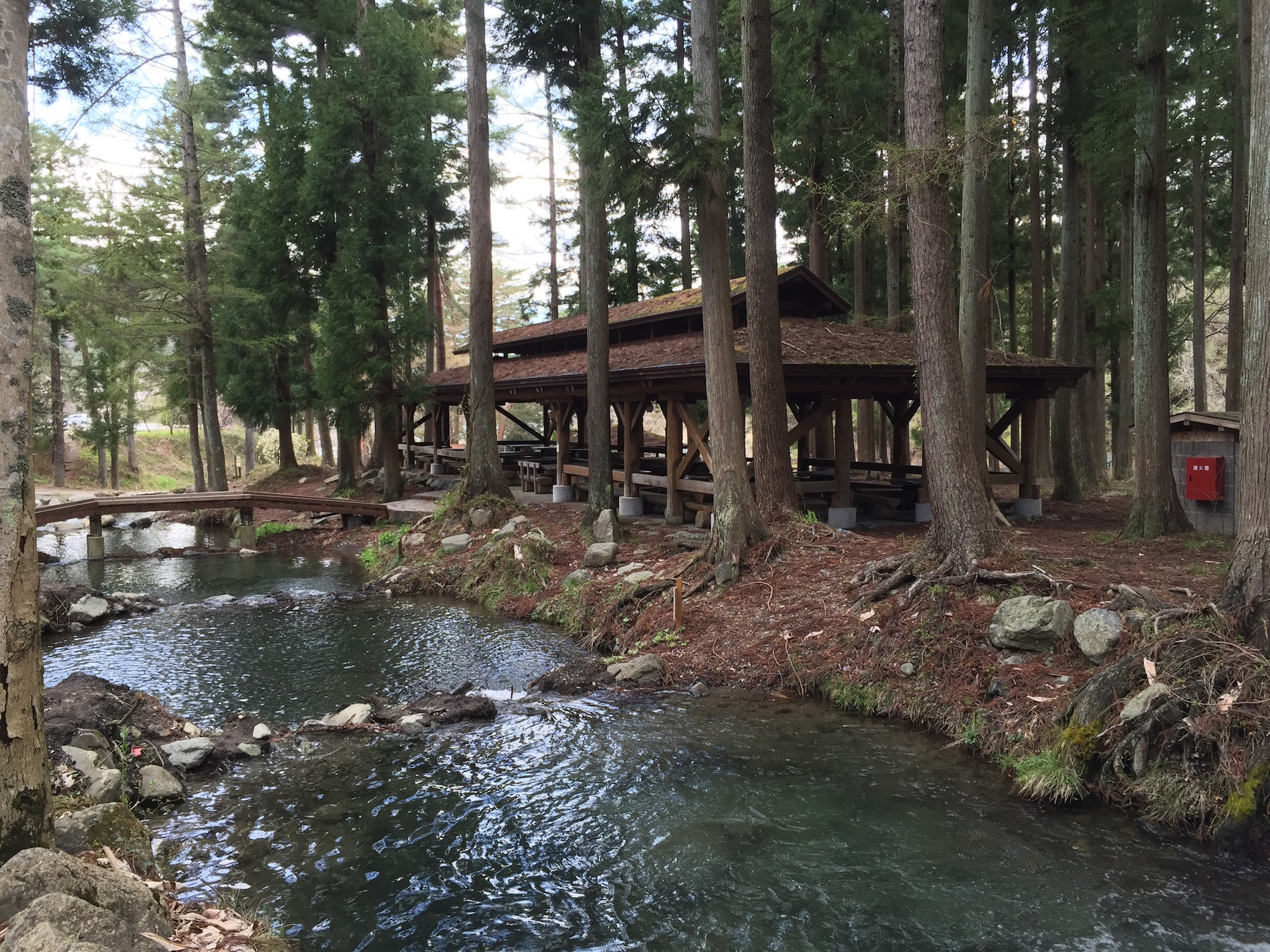 After a brief foray at the fish farm we turned off of Highway 413 and drove up Route 24. It was to be an introduction to the Japanese mountain driving standard. No matter what type of vehicle they are driving - 40 to 50 kmh over the posted speed limit is the norm and it does not matter how windy the road is either. They all drive like they are in a Formula One race. Combined with their love of cigarettes, copious amounts of sake, and mercury laden fish I am truly in awe at how healthy they all appear to be and how long they live. To crack the eternal youth conundrum scientists should take a long hard look at the Japanese genes. 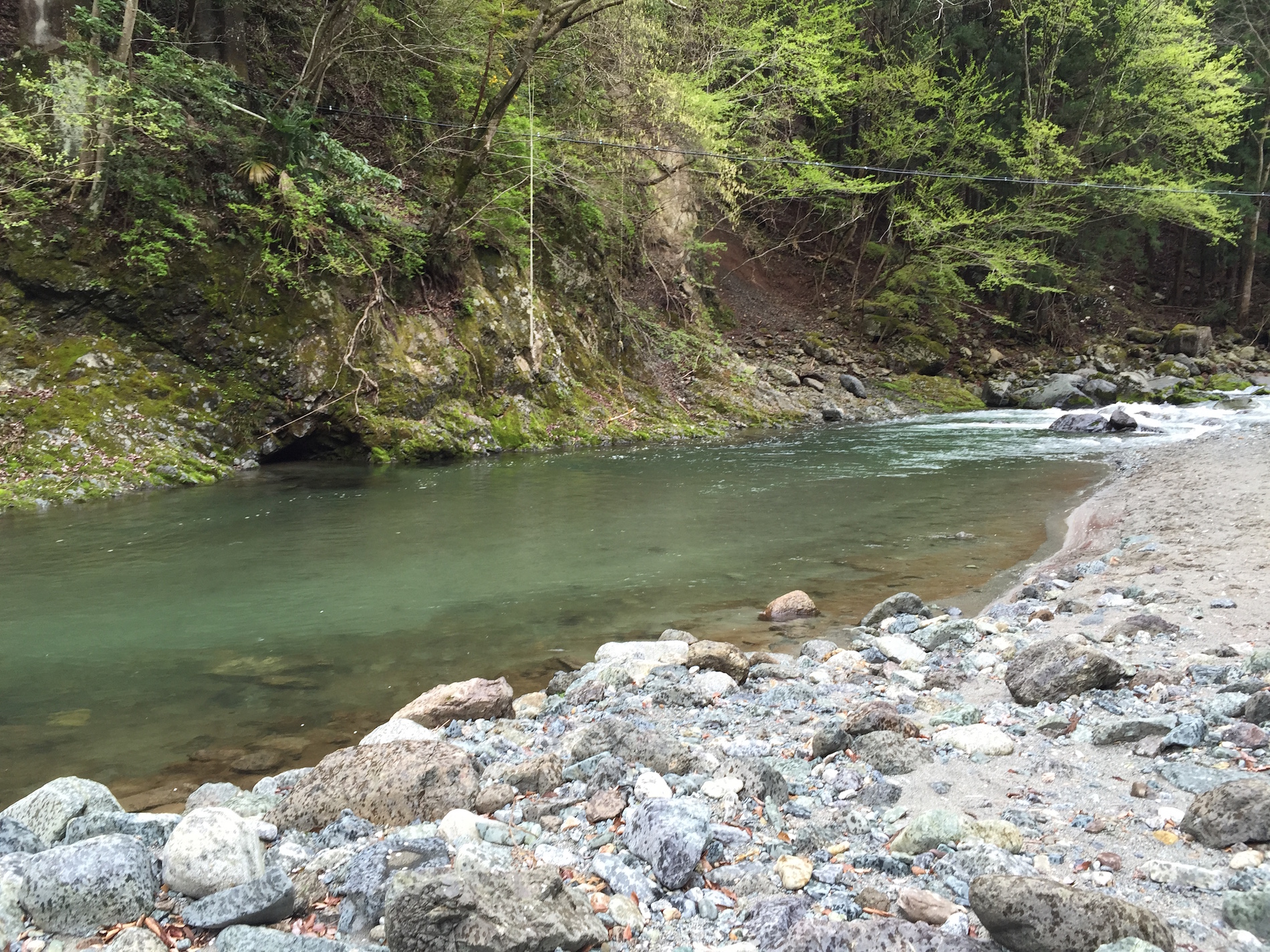 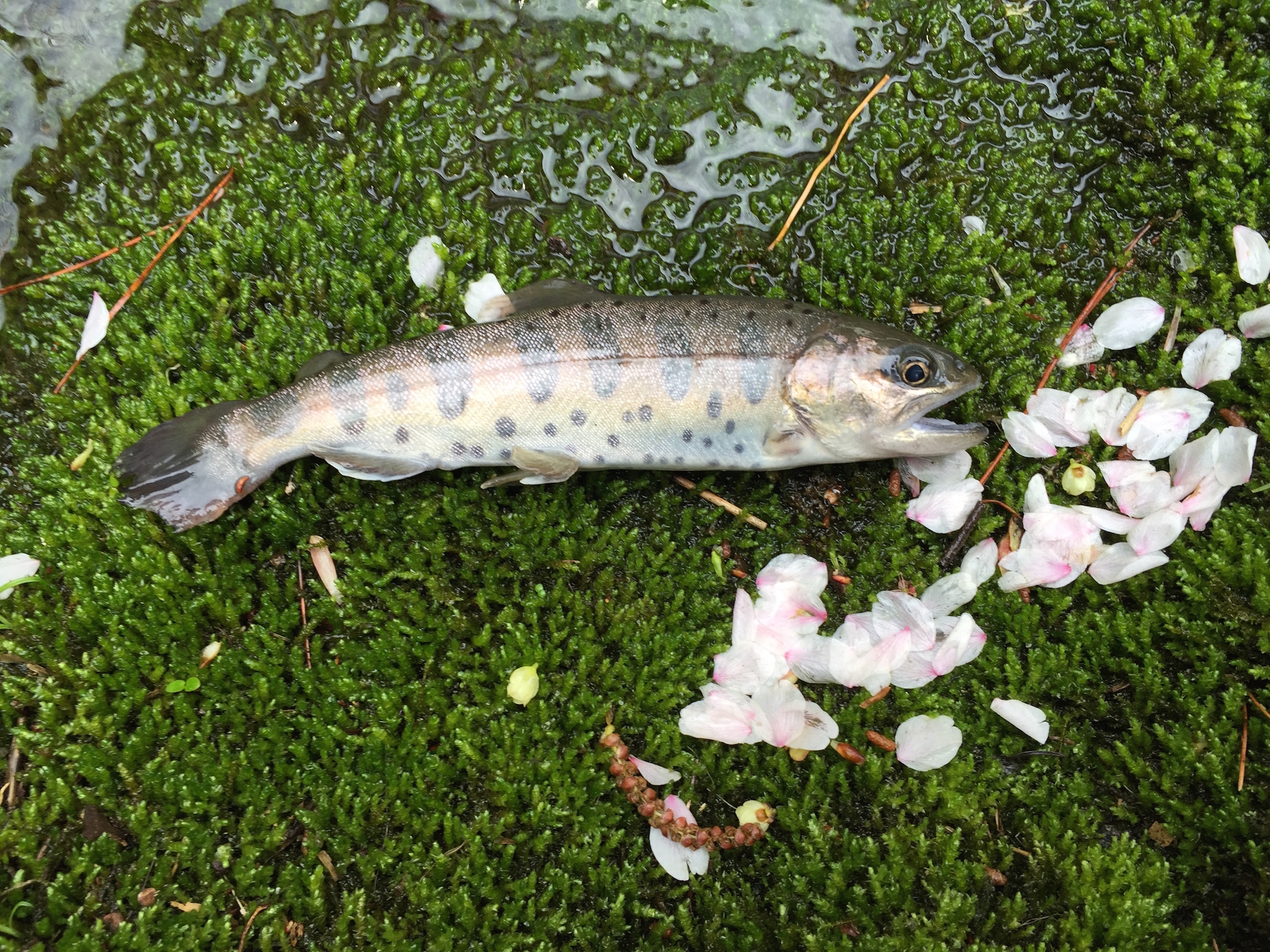 Having survived the harrowing drive along Route 24 we arrived in the quaint mountain city of Tsuru 都留. The friendly fly-fisherman we had met earlier in the day had suggested we check out Shishidome on the Shikatome River. It is a fishing area managed by the fishing store giant Tackle Berry. It was just outside of the city so we drove up to check it out. The Shikatome River is absolutely beautiful. Stands of Sugar Pines line the banks, there are deep pools, the water is crystal clear, and there are even a few man-made lakes. There are several picnic areas that you can rent to BBQ your days catch, camping spots, cabins to rent, they even have a small store and a bar overlooking the river. It is a little on the pricey side though - camping costs ¥9000 and a day fishing ticket costs ¥4500 per person. They offer pony rides and tennis as well as a nearby grass skiing park so there is plenty to do and it is in a gorgeous mountain valley. Day trips to Oshino and Mount Fuji are also easily accessed from here. It is a two and a half hour train ride from the Tokyo Station to Higashikatsura Station and will cost ¥4300 round trip. 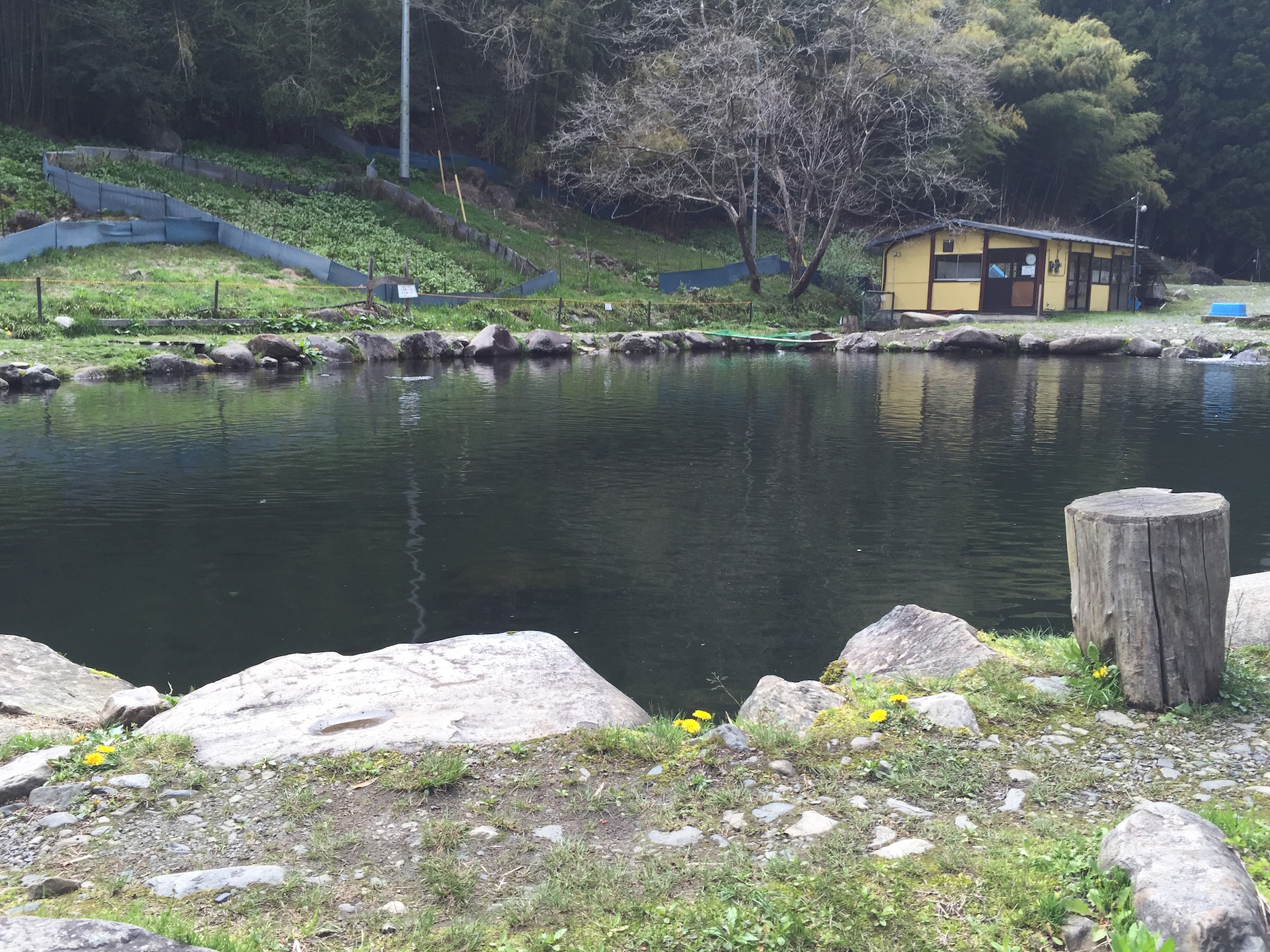 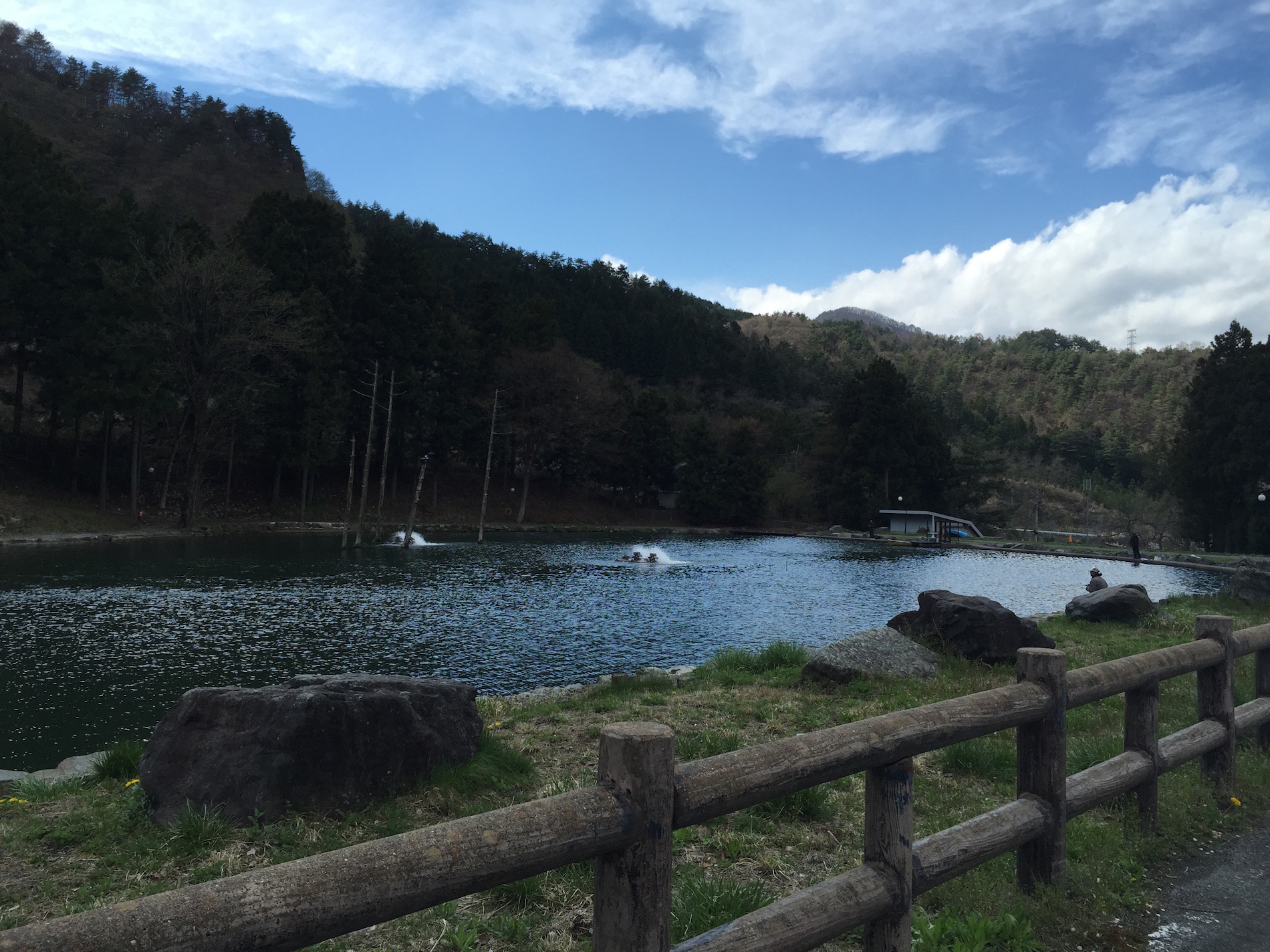 Shishidome was a little out of our budget so we pushed on. Our goal was to find camping somewhere along Highway 411. To get there we took Route 139. We thought Route 24 driving was epic but the driving on Highway 139 was even more intimidating. Rather than try to keep up with the locals we instead chose to take a more leisurely pace and soak in the views. While the spring flowers have mostly come and gone in Yokosuka up in the mountains they are just starting. Entire hillsides are covered in blooming and budding trees. After a bit of driving we saw a sign for a fishing operation and turned off of Highway 139 and made our way up to the small mountain town of Suganuma 菅沼 where we came across the Narago River Fishing Field. There was no one there but the owner. He was very young and a Tenkara angler as well! He was very excited to show us his exquisite Anglo & Company Setagaya Custom Design tenkara rod complete with a Tenkara USA bag! It only cost ¥3300 yen to fish for the day but it was getting late and we still had to find a place to camp so after chatting with him for a bit we pushed on. 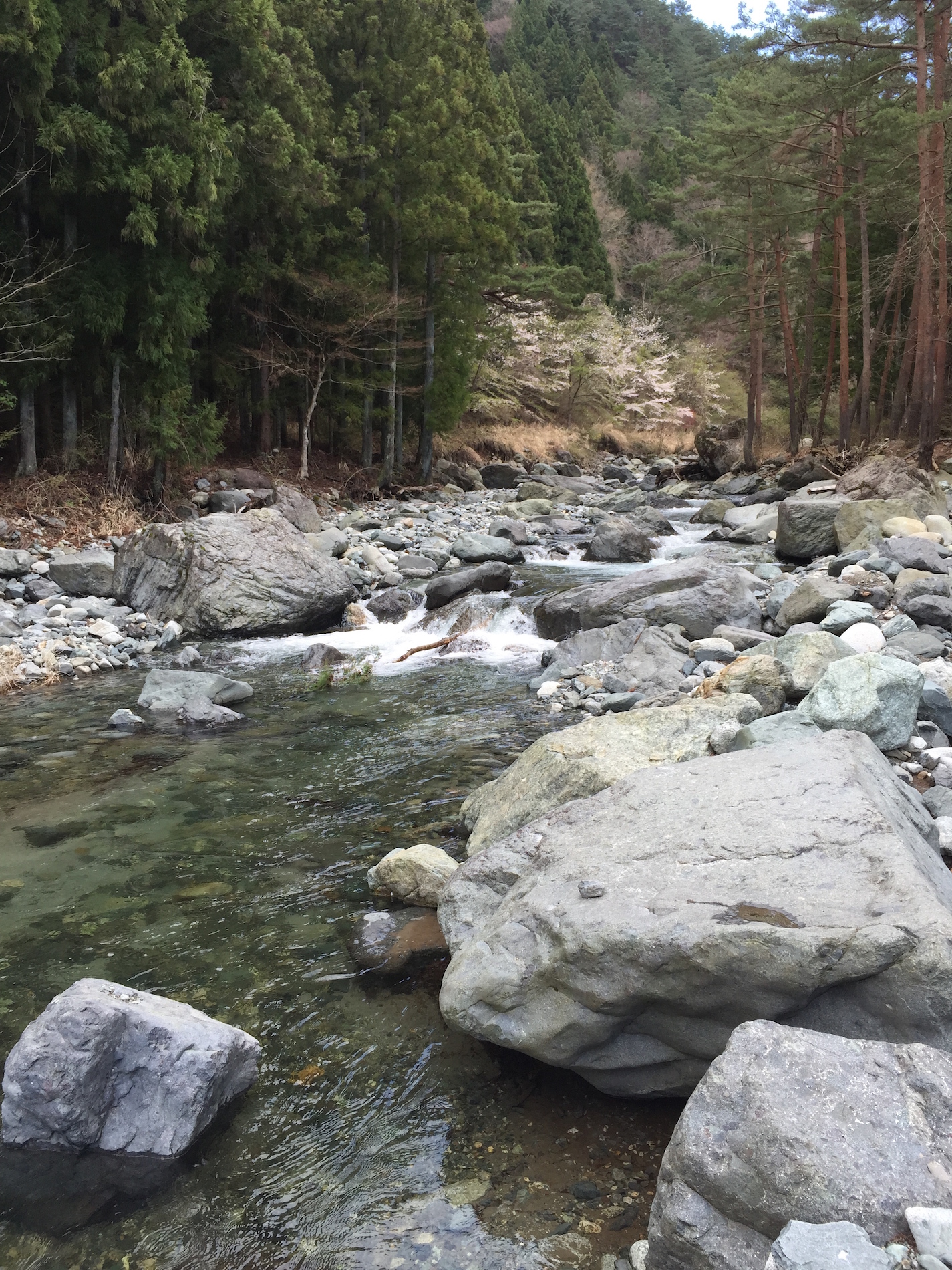 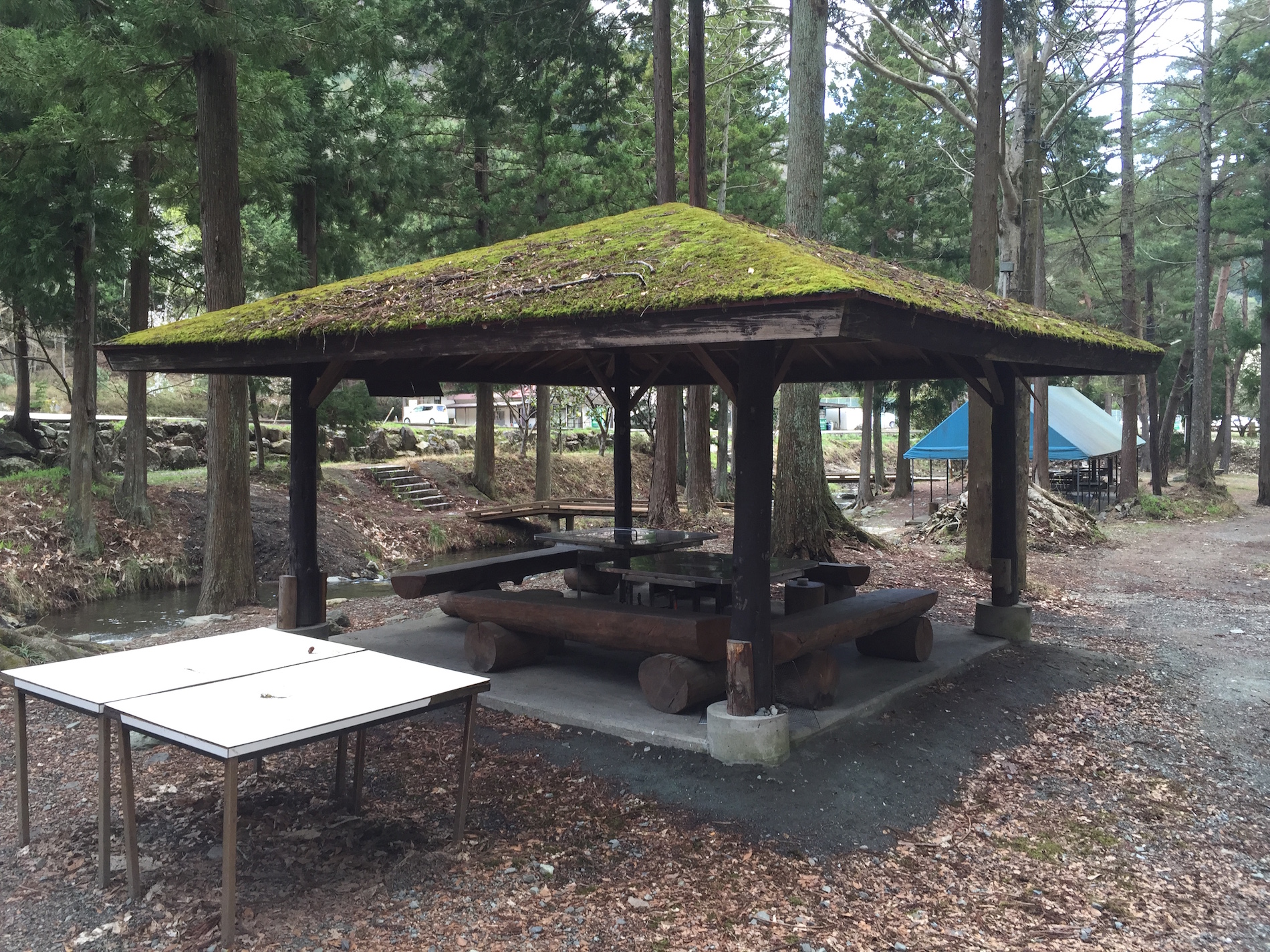 Safely on Highway 413 we began to look for a campsite. One after another was closed or out of business and we began to get a little worried. After a bit of searching though we found a place that was open - The Hikawa Camping Ground in the city of Okutama 奥多摩. It was ¥700 to park for the night and ¥800 per person for tent camping. The tent camping is on the sandy bank of the Tama River, unfettered access to some beautiful yet challenging fishing. We got our lines wet but did not have much luck, a few strikes and missed sets. A spin reel fisherman must have thought we were going to go hungry that night, due to our bad luck, so when he left he gifted to us his day's catch! A large rainbow and two very small Yamame! My buddy is a vegetarian so I had them all to myself :P That night we sat around our roaring campfire and sipped on sake and chu-hi. It was the perfect end to a perfect day! 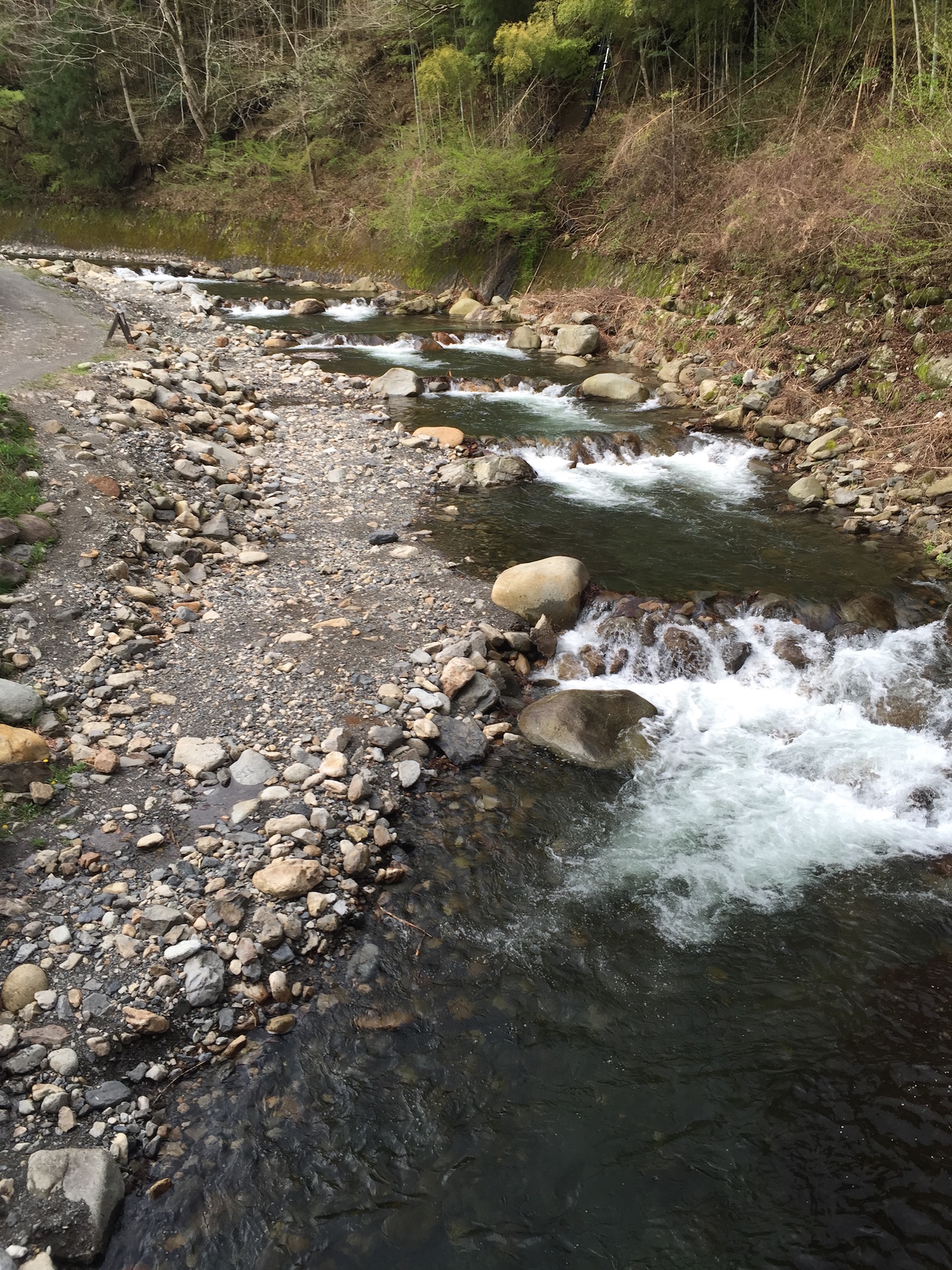 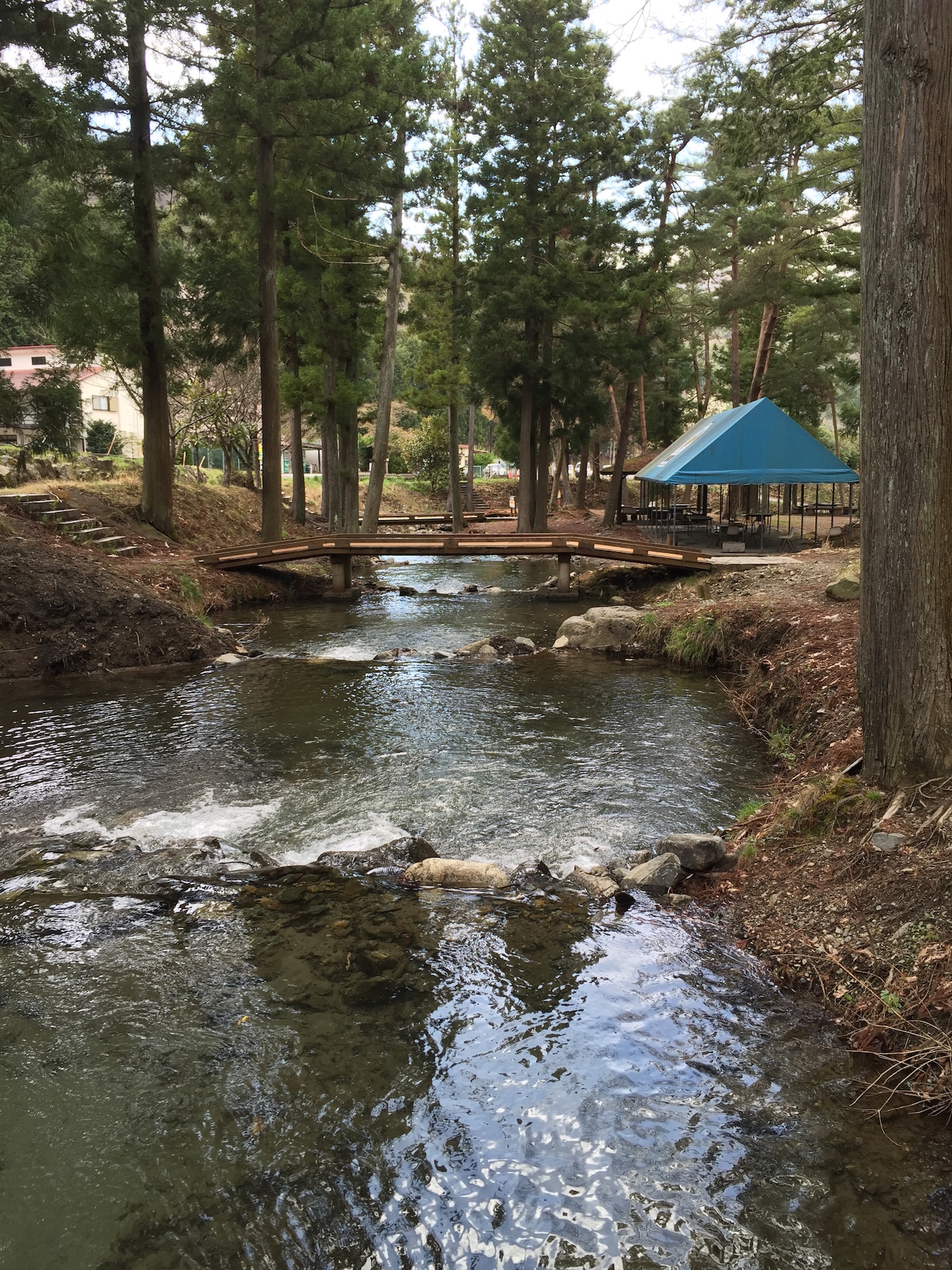